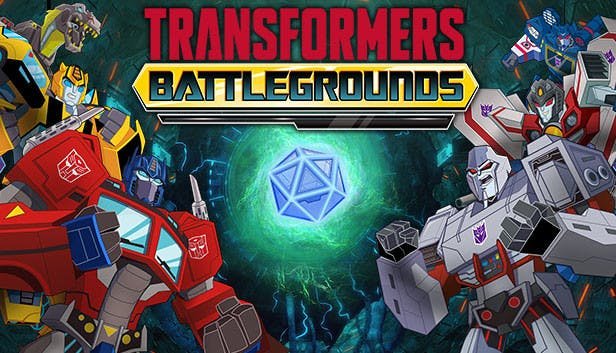 Hasbro’s Transformers are back on a familiar mission in Transformers: Battlegrounds though this time around the gameplay is less familiar for the franchise. Adapted to the real time strategy genre, Transformers: Battlegrounds has the player strategically guide the Autobots through extremely familiar plot territory… stop the evil Decepticons from retrieving the All Spark in their attempt to recreate Cybertron in the image of their fearless leader, Megatron.

Despite the exhausted premise, the formula works surprisingly well and is accessible enough to players less experienced in the genre. This makes for a more casual turn based experience that is a nice change of pace.

The player is cleverly integrated into the game in the opening sequence via fourth wall breaking dialogue between Bumblebee and Teletraan X, a drone that acts as a guide throughout the game. Directly acknowledging the player as a human, Teletraan X lifts the player into the air as a means of setting the overhead scene for this real time strategy experience. Before long, other Transformers characters are introduced, both Autobots and Decepticons with Autobot introductions typically leading to them joining Bumblebee as playable characters. Each character has their own abilities which can be customised in fellow Autobot Wheeljack’s Lab in between missions. 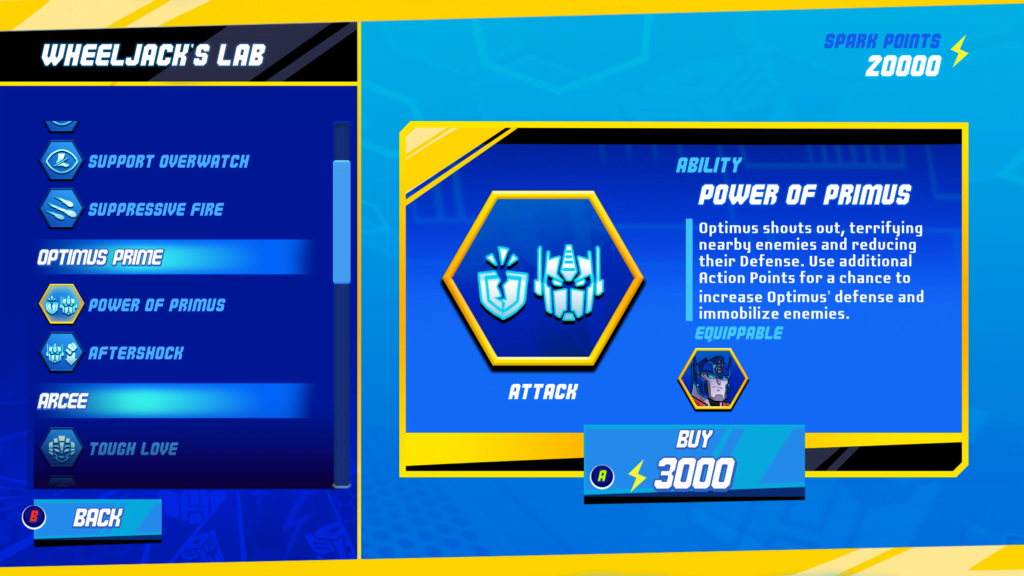 New abilities are purchased using sparks gained from completing missions. As the story progresses, new abilities become available for purchase for all playable Autobots. Character loadouts can be modified before every mission. The campaign plays out over 4 acts split into roughly half a dozen missions. As mentioned, the premise is well explored in previous Transformers tittles. The Decepticons want the All Spark, the Decepticons get the All Spark and the Autobots must retrieve it by defeating Megatron to thwart his dastardly plans. The story is competent though rather uninspired for those familiar with other Transformers games. 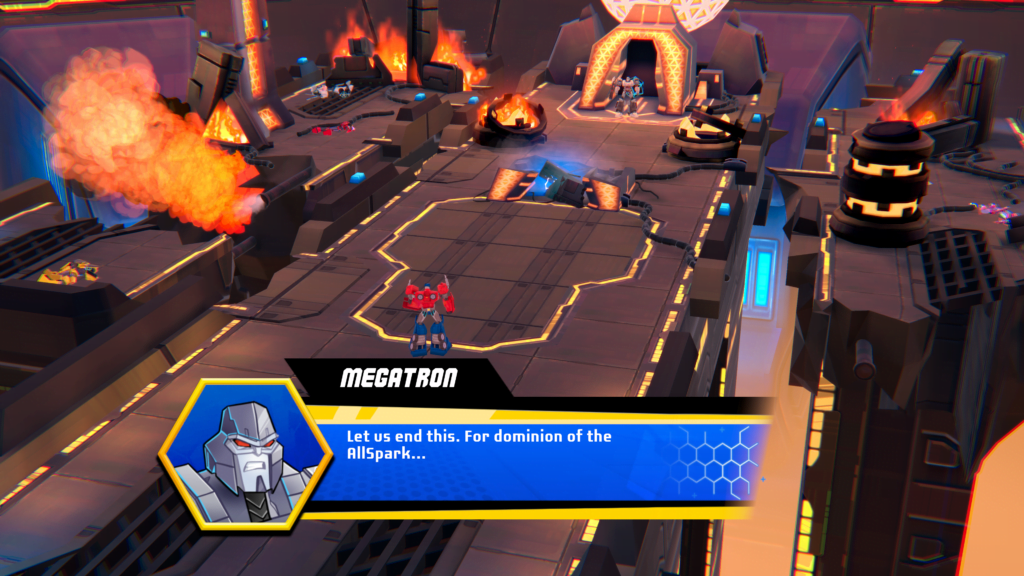 Smaller in scope than real time strategy titles such as Age of Empires or Halo Wars, Transformers: Battlegrounds utilises only a few characters at a time. There’s no base building, defence construction or army recruitment for example. The action is more intimate, sending a few Autobots into a mission to wage war against only a handful of enemy Decepticons at a time. The smaller scope is certainly reflected in the gameplay that lacks the depth of the titles mentioned above. That’s not to take away anything from Transformers: Battlegrounds as it’s intent is clearly to appeal to a younger and more casual audience and it succeeds in the execution as such. 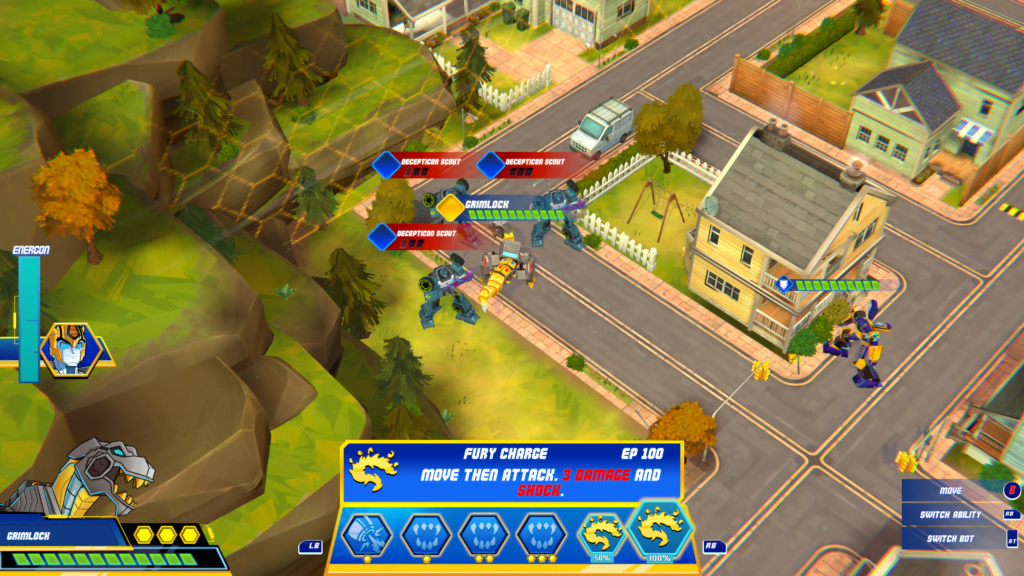 Keeping in line with the simplistic scale, the gameplay itself is simple and accessible. At the bottom centre of the screen is the Action Bar. Here the player is able to select an action for the selected character to use. These vary with the likes of melee and ranged attacks and healing actions. A number of abilities also have a chance to inflict status effects while a select few will do so definitely. These effects include shock, which deals a singular damage point against the affected enemy at the beginning of their turn or X which immobilises the enemy for X amount of turns.

Each faction is able to have every available Transformer perform a set number of actions before the opposing faction gets their turn. Every ability requires Action Points which replenish every turn, with each character having 3 Action Points per turn. Abilities use between 1 and 3 Action Points as indicated by yellow orbs above the ability in the Action Bar. The higher the Action Point cost, the more damage or greater area of affect the ability will have. 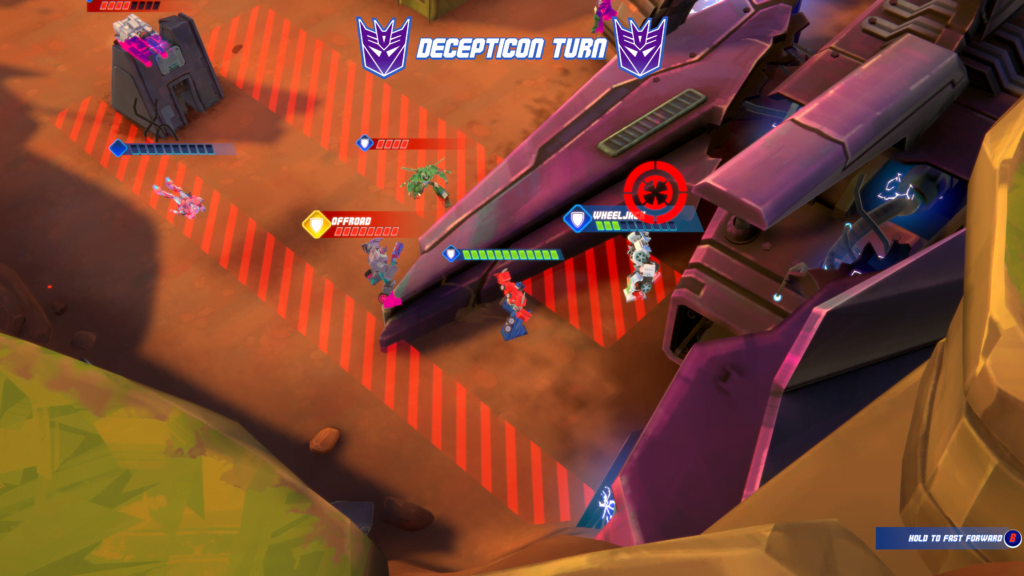 With every Action Point used, regardless of whether it is moving or attacking, the Energon meter gradually fills. Ending a turn while Autobots have unused Action Points will also feed the meter. When the meter reaches 50% or 100% capacity, each Autobot is able to use an Ultimate ability that will vary in effectiveness dependent on the volume of the Energon meter. These Ultimate abilities typically include a combination of movement and attack, healing or status effects.

Using a grid like system, players are able to see if enemies are within their range. Without an ability selected, the player is able to move their Autobot around the map within a limited range. Dependent on the distance from their start point, moving will cost anywhere between 1 to 3 Action Points with movement able to occur before or after attacks. Having only 3 Action Points forces the player to consider their location on the field as well as the ability to attack, meaning sometimes it may be necessary to spend more points to place Autobots behind cover, which restricts the Decepticons’ range, instead of unleashing an attack. 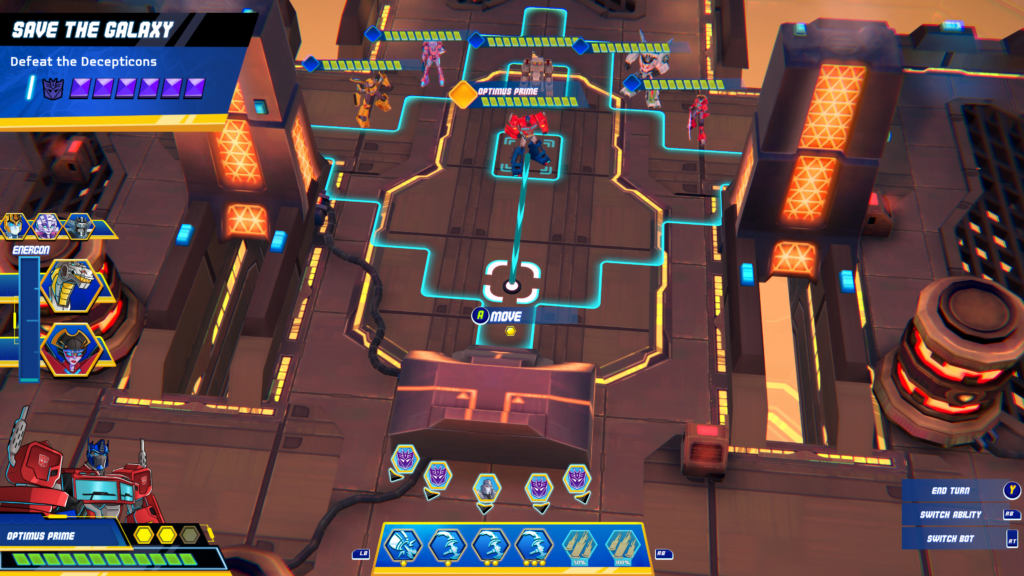 Some attacks will shove an enemy, pushing them away from the Autobots to create separation. This can further be capitalised on by shoving enemies into other enemies or the environment, including explosive objects, all of which can inflict additional damage. Care must be taken when considering these moves as they could possibly damage ally Autobots in the process.

Each Transformer has a health bar that does not regenerate with the exception of healing abilities used by other characters. Once the health bar depletes, the Transformer is Deactivated and no longer be used until the next checkpoint is reached. Luckily, there are only a handful of Decepticons between each checkpoint. 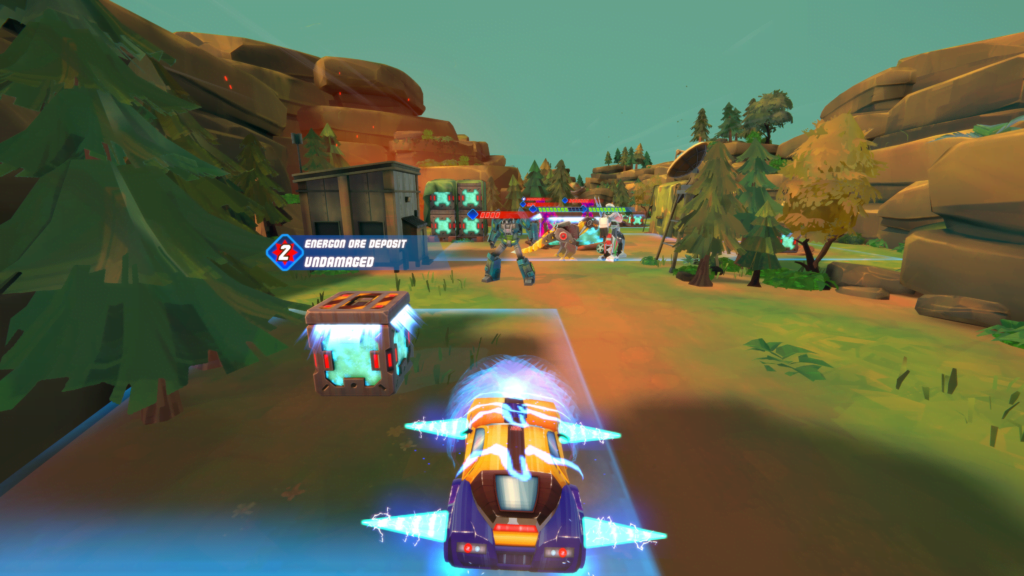 Throughout the mission various objectives are displayed on the top left indicating whether all Decepticons in the area need to defeated or that a target location needs to be reached for instance, in the case of the latter the player is recommended to get there as soon as possible as Decepticons will continue to spawn and can not be completely defeated.

Transformers: Battlegrounds supports local co-op in the form of Arcade, allowing 2 players to work together in 5 modes though it can be played solo. 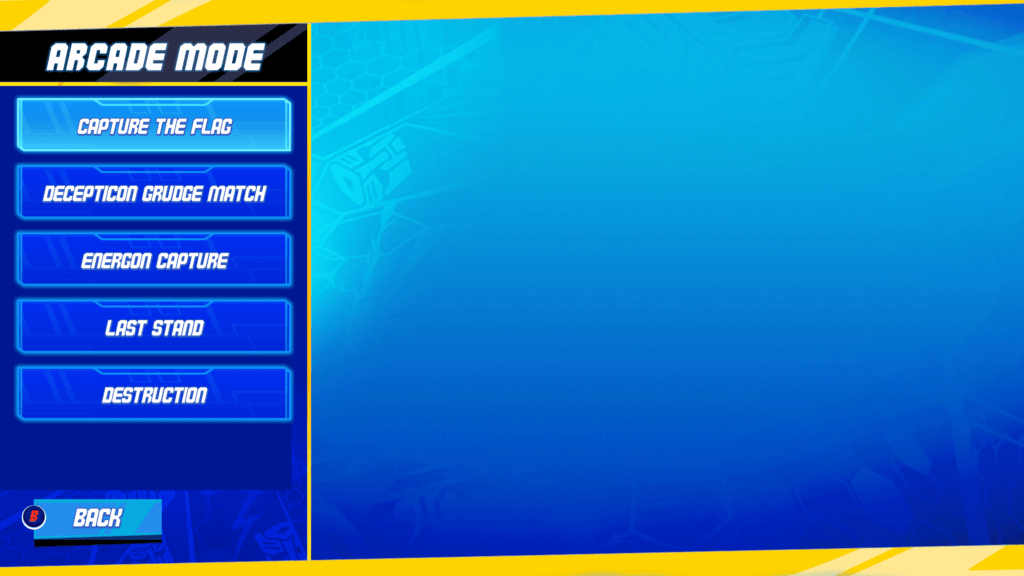 Capture the Flag requires the players to capture the Decepticon flag and return it to the base 3 times. All 6 Autobot characters are available to choose from, this applies to all Arcade modes with the exception of Decepticon Grudge Match.

Decepticon Grudge Match puts the players in a squad of 4 Decepticons versus 2 Autobots. There are 6 Decepticons to choose from which include their maniacal leader Megatron.

Energon Capture sees the player trying to capture and defend Energon Ore Deposits in 10 turn game. The team with the most Energon at the end of 10 turns wins the game.

Last Stand tasks players with lasting as long as possible against infinite Decepticon forces. This is not a mode that can be won, the Decepticons will ultimately succeed. This is a true test of skill to see just how long the player can hold their ground as the Autobots.

Destruction simply requires the players to deactivate as many Decepticons as possible within 10 turns using 4 Autobots. All Autobots are repairs automatically every 5 turns. Every Decepticon deactivated will see a new one arrive and take its place.

Successfully completing a mission which unlock a new mission in a new map for that mode. This adds replayability to each mode in Arcade, giving players essentially a mini campaign across each of the 5 modes that can be enjoyed solo or with one other player locally.

Easy on the eyes

Visually, Transformers: Battlegrounds is extremely simple in terms of its art design. Character models and the environment are very basic in their aesthetic. This decision was likely made to reflect the simplistic gameplay and overall casual experience. By no means does this take away from the experience, instead it feels and plays with tone of levity, one that affords the luxury of time instead of pressuring the player into a face paced frenzy. Personally, this pacing felt good and relaxing, avoiding becoming a stressful experience burdened by a challenging difficulty. With an easy, medium and hard difficulty to choose from, the player is able to truly enjoy the experience at their own pace. Playing through on medium will take approximately 5-6 hours and hard will certainly expand on that with the pretty challenging AI that comprise it.

The fun sound effects, energetic score and good voice round out an authentic feeling Transformers experience.

Should you save the world from Megatron? Again?

For newcomers and Transformers fans alike, Transformers: Battlegrounds is an interesting experiment. Instead of the fast paced third person shooters players have grown familiar with, the real time strategy approach ultimately succeeds despite being a more casual and accessible experience. The story is more forgettable than the engaging gameplay on offer and the addition of an Arcade mode makes it something the family can play together co-operatively.

– Harder difficulties could have had more depth in mechanics