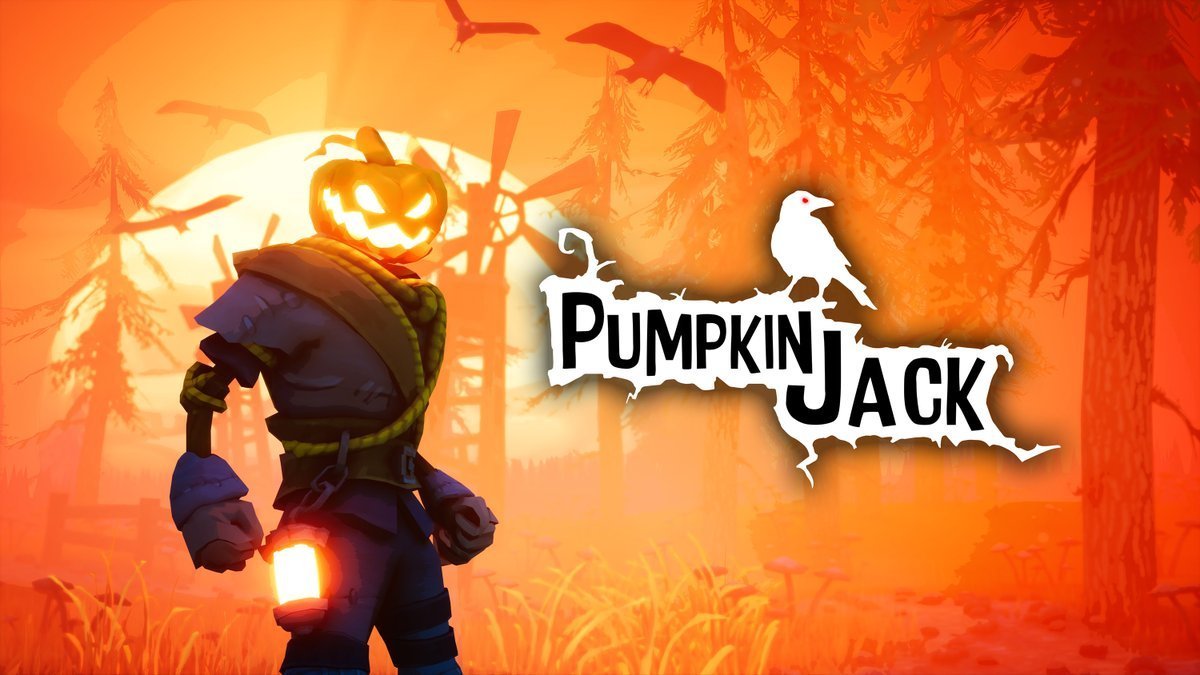 Hand chosen by the Devil himself, the pumpkin headed Jack embarks on a fun adventure that feels familiar yet refreshing

Pumpkin Jack is a 3D platformer that feels familiar and fresh, undoubtedly inspired by the likes of MediEvil and other classic platformers. The titular pumpkin headed warrior has been summoned by the Devil himself to stop mankind’s champion, a wizard, from thwarting his otherworldly invasion of earth via the curse of eternal night and the legions of his monsters that follow. 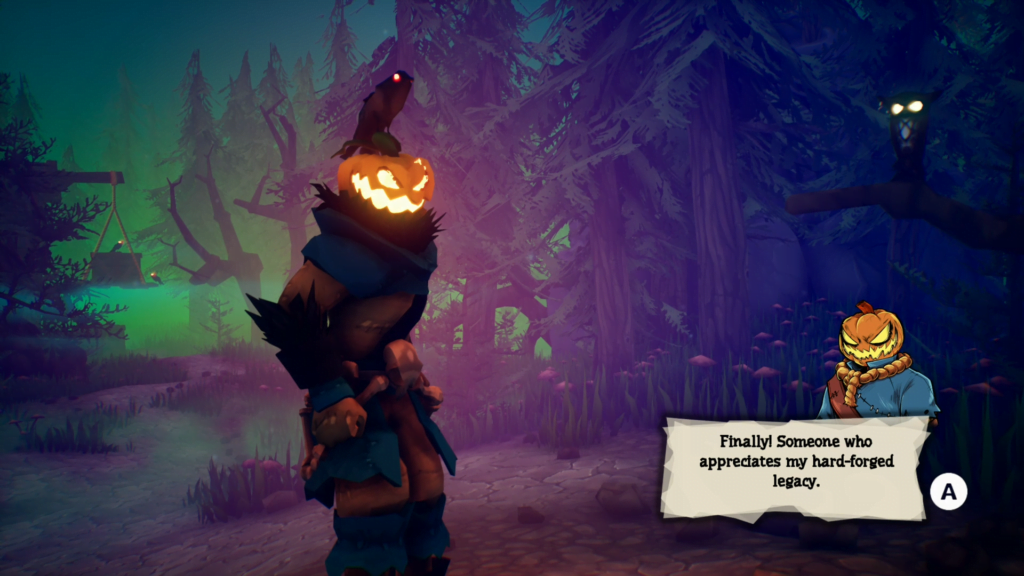 A joyful art direction and fun gameplay make for an enjoyable adventure full of nostalgia for fans of platforming classics.

This simple premise precedes an adventure that sees Stingy Jack, whose soul has been embedded inside a pumpkin atop a skeletal body, cutting down the devils army and human soldiers to stop the wizard at all costs. In return for his service, the Devil will forgive Jack for his sins committed against him.

The story of Pumpkin Jack is told in between each of the 6 levels in a fairy tale like format with narrated illustrations. Soon after the opening level begins, Jack is soon introduced to a crow that accompanied him throughout his journey. This crow regularly and amusingly chats with Jack through text based dialogue and can also be commanded to attack enemies. 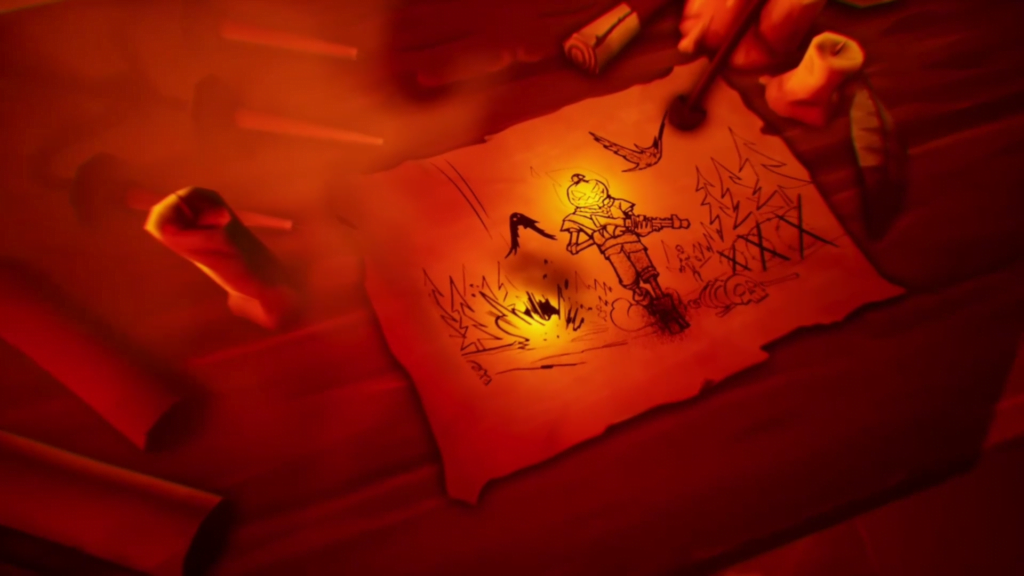 Each level culminates with a boss battle, requiring the player to avoid a series of attacks before a window of opportunity presents itself for Jack to attack. After 3 cycles, each of which adds a new threat, the boss is defeated and the story progresses. These battles are fun, simple and varied and each boss is creatively and playfully designed. 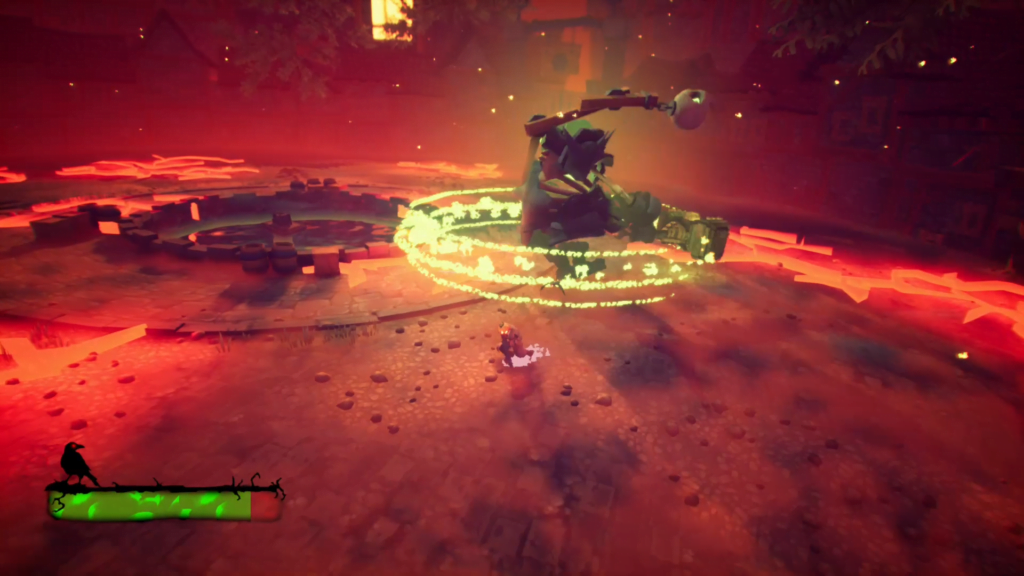 As somewhat of an anti-hero, Jack’s exploits and disposal of monsters and soldiers portray the wizard, mankind’s champion, as the villain. This is fun to see play out, particularly when Jack encounters arguably one of the greatest embodiments of all things good… Santa Claus.

Littered with self-aware humour, Pumpkin Jack is a light hearted adventure that is deviously fun. It doesn’t take itself too seriously and as a result the levity lends to a more casual and enjoyable experience that will keep a casual player busy for 3-4 hours. The gameplay itself feels reminiscent of MediEvil from the PlayStation 1 era. Undoubtedly inspired by many of the great platformers of years gone by, Pumpkin Jack feels familiar in a playful way. 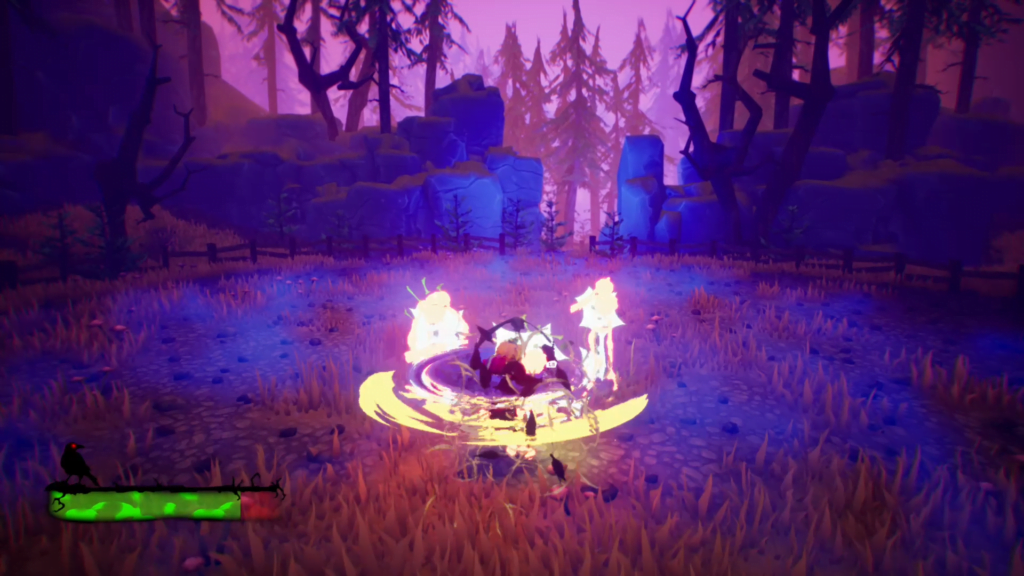 The combat is restricted to a simple button and the player is able to jump and evade. As well as the ability to send the crow to unleash a single strike on enemies before a very brief recharge, the combat is simple and works well. With progression through the story, a total of 6 weapons are unlocked that can be switched between. Each feels unique and fun to use. 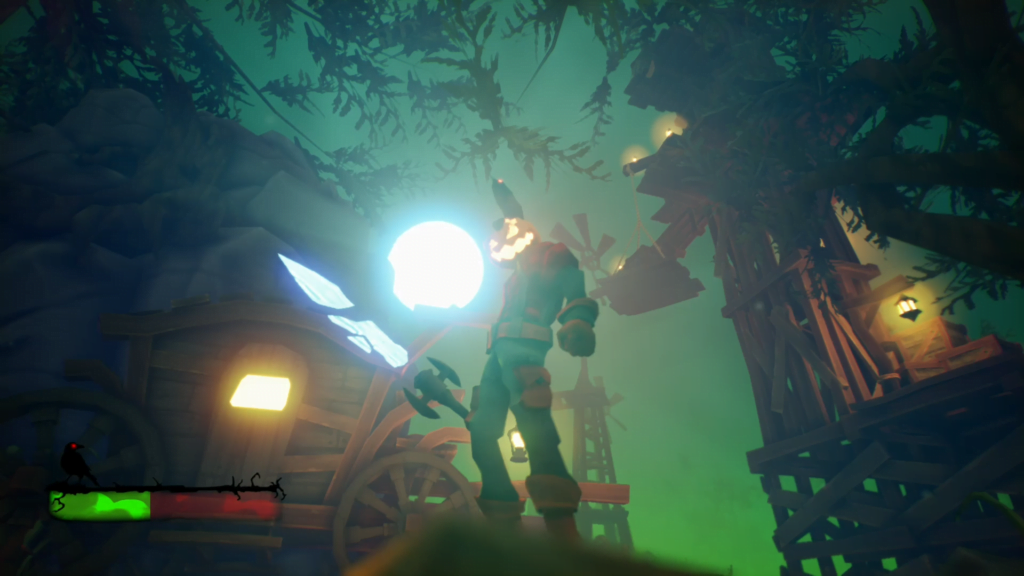 Health can be restored by defeating enemies, destroying objects in the environment such as boxes, barrels and tombstones or by drinking a green primordial stew from cauldrons that also act as the games checkpoint system. There are some pretty cool riding sections throughout the games’ 6 levels that include dangerous boat rides controlled by a grim reaper, galloping across a swamp on a supernatural horse and deadly roller-coaster style rides in a minecart. These are are such fun distractions that don’t overstay their welcome and highlight the decent size and design of each unique environment. 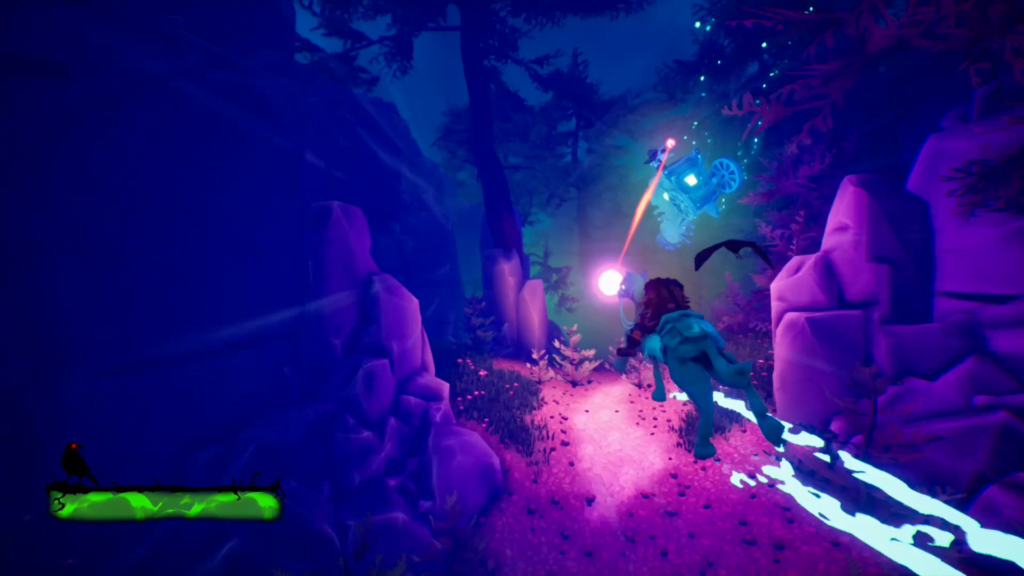 As for the platforming itself, it relies on the typical jumping and climbing for the most part and despite the overall experience feeling inspired by classic games from the genre, it feels a lot smoother and more accurate. Throw in some light puzzle sequences for good measure and Pumpkin Jack feels like a complete and genuinely good 3D platformer. At predetermined times throughout each level, Jack is able to interact with a statue that leads to him removing his head so that it can travel through it to solve some sort of puzzle. Upon completion, Jack’s head returns to his body and he is able to progress.

These segments are absolutely reminiscent of MediEvil and is a feature I personally can’t recall in a title since though so it’s inclusion is certainly welcome and works within the context of the character. 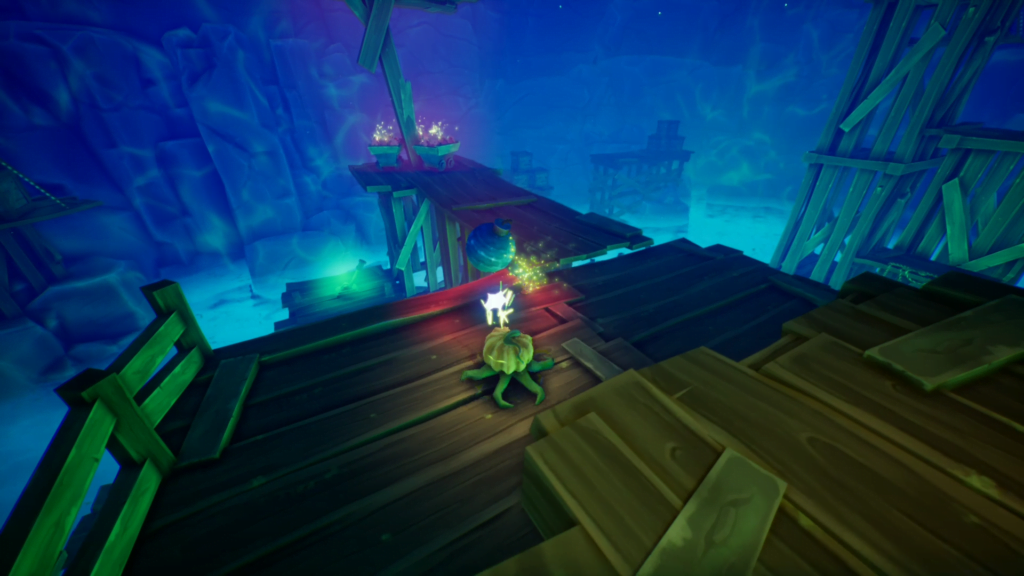 Each of the 6 levels has 20 crow skulls to find which glow red and can only be picked up outside of combat. Within each level and the main menu itself the player is able to spend these on new skins that vary in cost.

To unlock all skins every crow in every level must be collected. The roaming merchant that appears in the levels has some very amusing and self-aware dialogue exchanges with Jack that were always a joy to witness. 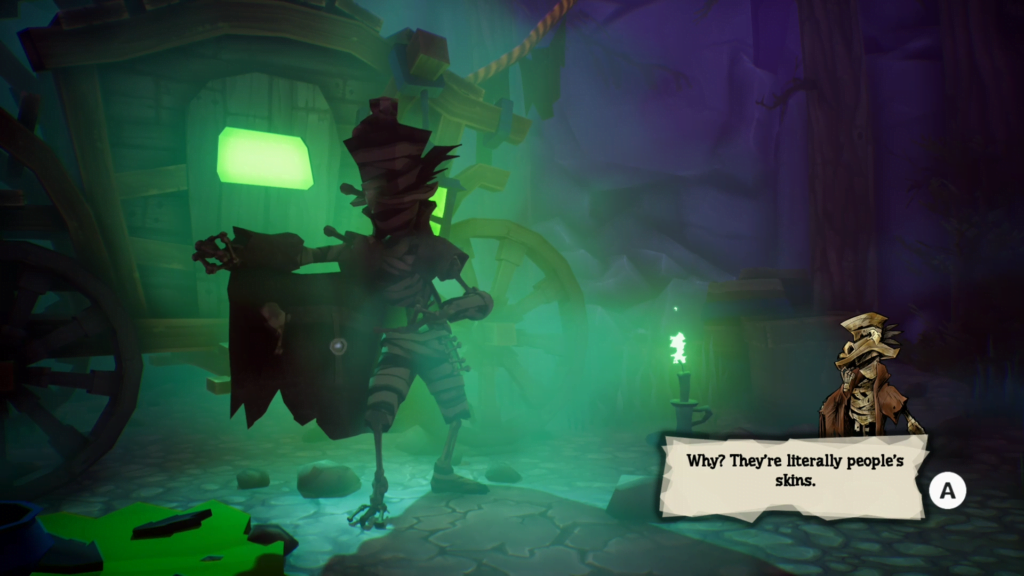 As well as the crow skulls, each level also has a hidden gramophone that serves no purpose other than to have Jack unexpectedly burst into dance. It’s so wonderfully weird and confusing as to why but that makes it all the more enjoyable.

There is a playful charm to Pumpkin Jack’s entire presentation. The art design is so enjoyably creative and each level feels unique and inspired, including its fun enemy variety. 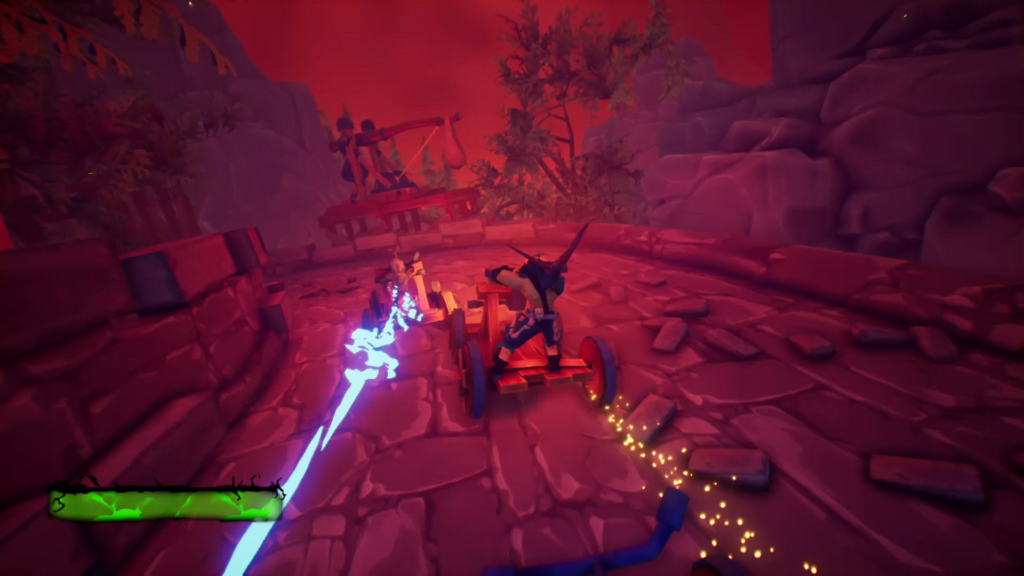 The score is so perfect for the experience too, shifting with each new location and ranging from energetic and upbeat to slow and ominous and a haunting iteration of Christmas music was a real treat.

It’s near impossible to comprehend that Pumpkin Jack was developed by solo developer Nicolas Meyssonnier. The overall presentation and mechanics are so well executed, despite not speaking a single word Jack feels like a meaningful character in a world that thrives on paying homage to classic titles while holding its own as a unique entry itself. 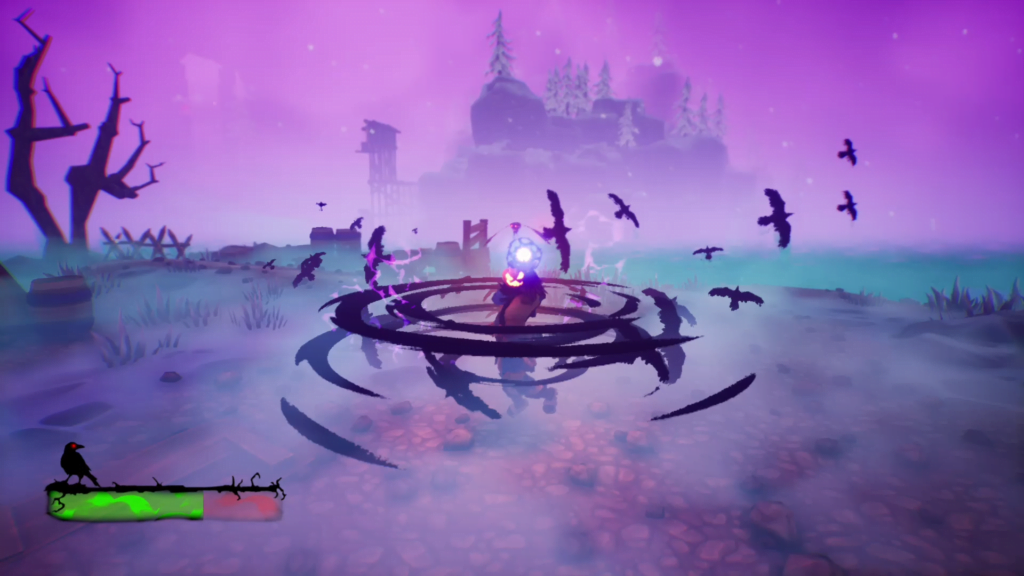 Pumpkin Jack is fun and entertaining, an experience players of all ages can enjoy. Arriving just in time for Halloween, Pumpkin Jack is no trick. It’s a genuine treat.