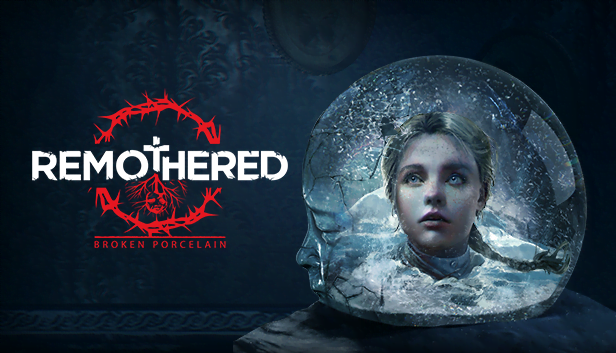 Unfortunately porcelain is the least broken part of this sequel

Remothered: Broken Porcelain is the sequel to 2018’s Remothered: Tormented Fathers. Due to its primary timeline taking place in 1973, this instalment is essentially a prequel that answers a lot of the questions from the first game while continuing the overall narrative of the series in the present day sequences.

Regrettably, this third person survival horror is broken to the point of unplayability in cases such as my own experience and has more bugs than just the moth-centric supernatural abilities explored in this title.

The legacy of a tormented father

As with Tormented Fathers, the story alternates between the present day and a previous time period. In Broken Porcelain, the narrative of the old woman introduced in Tormented Fathers, Madam Svenska, continues to unfold as she recounts a story to the unseen Mr. Manni character. 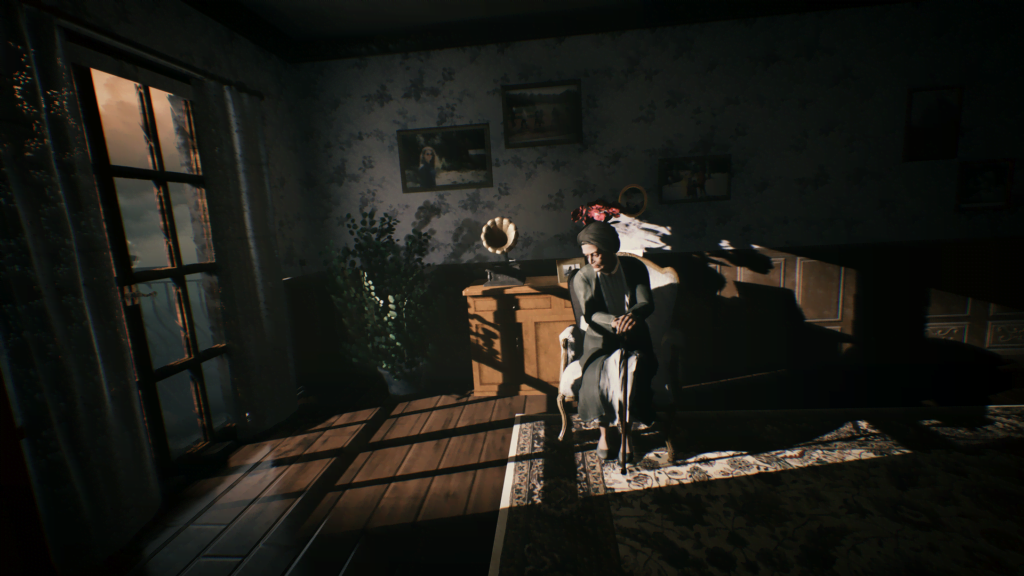 Broken Porcelain has a handful of playable characters including Rosemary Reed from Tormented Fathers while also introducing 3 others. The player primarily plays as Jennifer, daughter of Richard Felton who acted as the primary antagonist of Tormented Fathers. Jennifer’s story is played from her present in 1973 and also has playable flashbacks from when she first arrived at the Ashman Inn, the predominant setting of Broken Porcelain.

Jennifer’s interaction with fellow maid Lindsay “Linn” guide the story for the most part, allowing the player to experience the origin of their friendship and the struggles they endure due to the twisted manipulation at the hands of Stefano Ashmann, owner of the Ashmann Inn. Continuing the story first revealed in Tormented Fathers, Ashmann’s experimentation with the Phenoxyl drug and it’s mind control properties is further explored and Jennifer’s unique immunity to its power is unraveled. 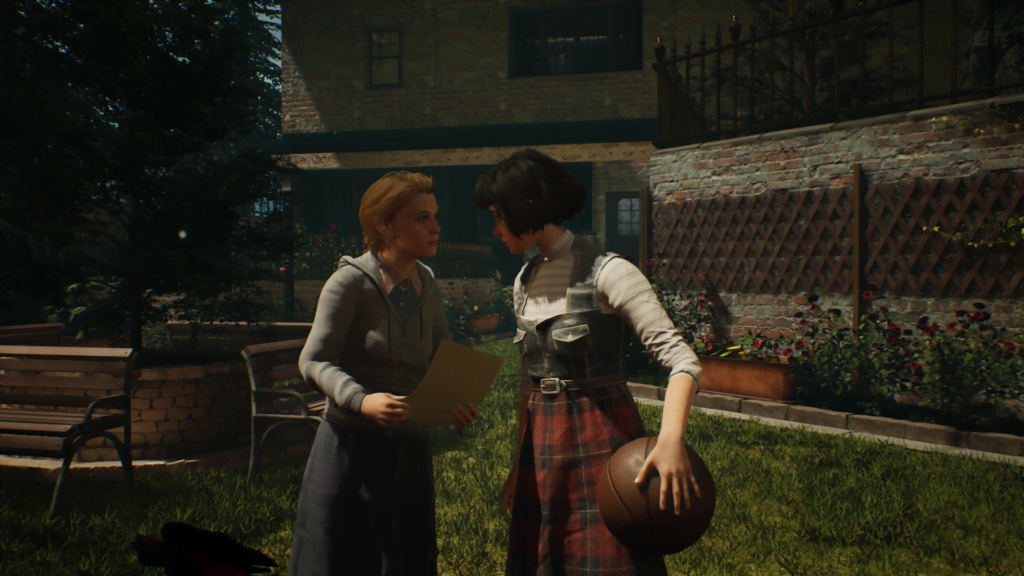 The deepest and darkest parts of Jennifer’s past and family are laid bare in a tale that is unnecessarily over complicated. The explanation of telepathic and hypnotic control of the subjects infected with Phenoxyl and the collective consciousness created as a result will likely confuse players that don’t pay absolute attention to these scenes.

Playing out alongside Jennifer’s story is Rosemary’s continued search for Celeste from Tormented Fathers who players will recall is actually Jennifer. Interwoven with Jennifer’s arc, Reed’s largely plays out in conversation with a bed-ridden Ashmann in present day, his face disfigured to the point of being unrecognisable. 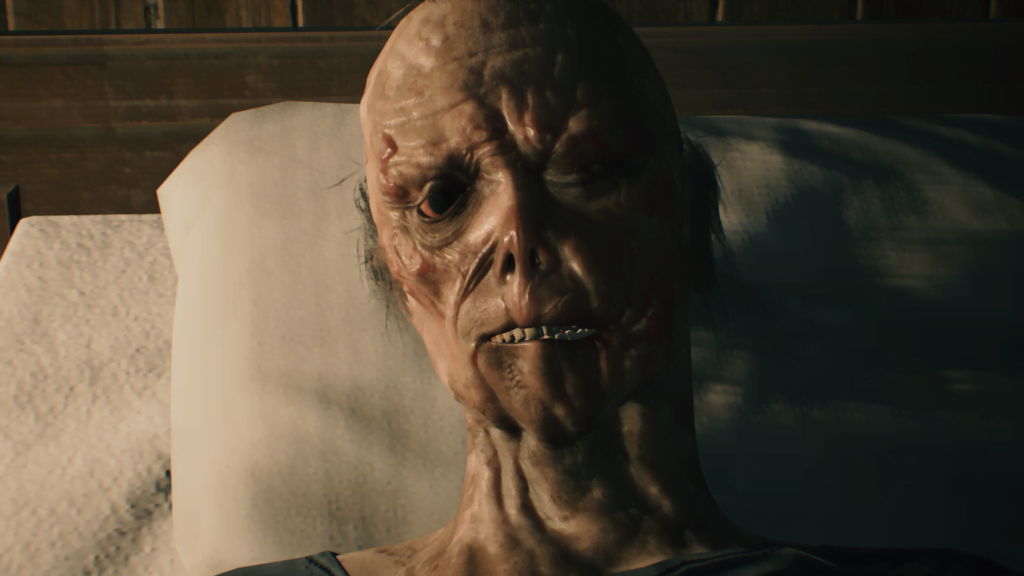 Reed’s motives are not made clear until the closing moments of the game in very predictable fashion. Her interest in finding Celeste/Jennifer is obvious to eagle eyed players within minutes of the opening of Broken Porcelain and unfortunately this predictability undermines the “big twist” at the climax.

Majority of the cutscenes end abruptly, jolting the transition between cinematic and gameplay to the point where the two segments feel disconnected. This lack of cohesion significantly kills any momentum the story may have been building up to and during the cinematic.

The gameplay remains similar to Tormented Fathers in almost every aspect. Played in the third person perspective, the player must navigate the environment using stealth so as not to alert the stalking enemy characters to their presence. Large boxes, closets and lockers can be hidden inside while they pass or used to break the line of sight of any enemies in pursuit.

If an enemy sees the player enter one of these hiding spots they will immediately rip them out from it. If a hiding spot is used while being chased but not seen doing so, a brief mini-game ensues where the right thumb stick must be kept inside a circular area to remain calm and avoid detection. 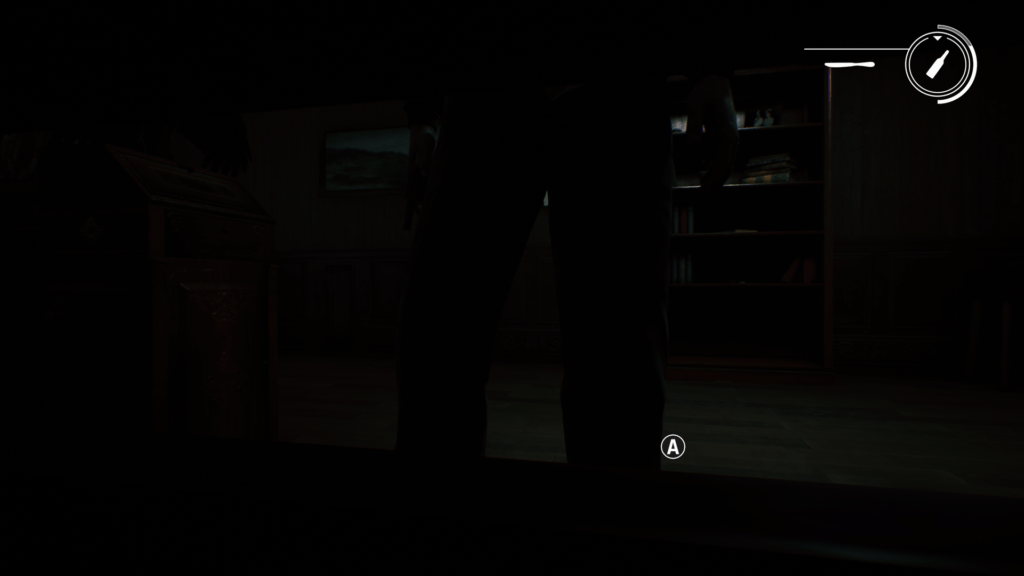 3 distraction items can be held which include the likes of bottles or teacups which can be thrown to lure enemies. A singular defensive item can also be held which can be used to break an enemies grip if caught following successful execution of on-screen prompts. 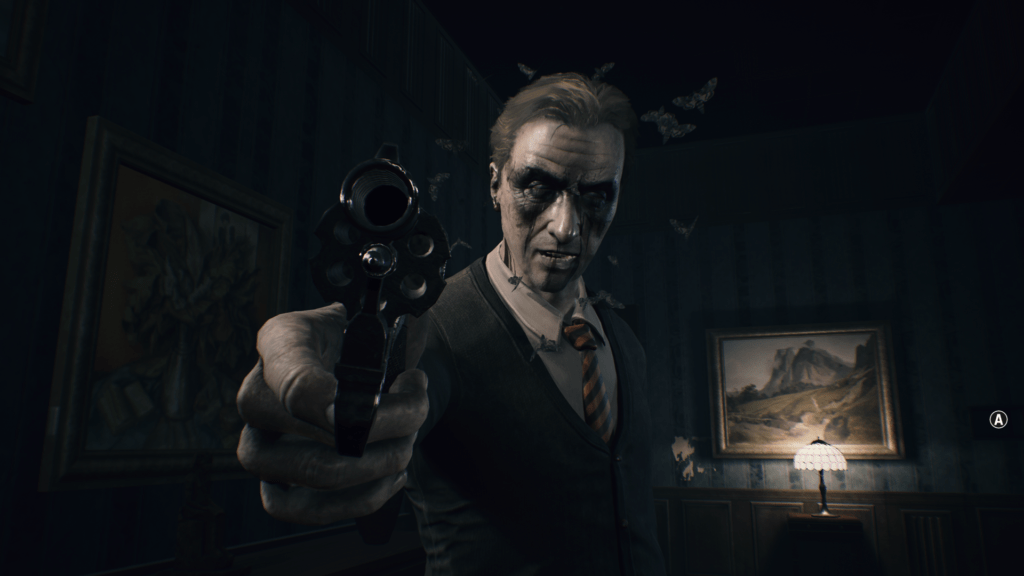 Sprinting and crouching are intended to allow the player the opportunity to approach any encounter with stealth or to make a run for it with the risk of drawing attention.

Since launch, October 13, only one update has made its way to Xbox and this unfortunately has not remedied majority of the lengthy technical issues that have haunted my experience more than any jump scare.

Sprinting vs crouching made no difference in my enemies detection of me. The ability upgrade system I can not even discuss as it has never worked despite finding dozens of the moth keys required to upgrade them at upgrade boxes. What upgrades are available and how do they enhance the experience? I don’t know as they don’t work. 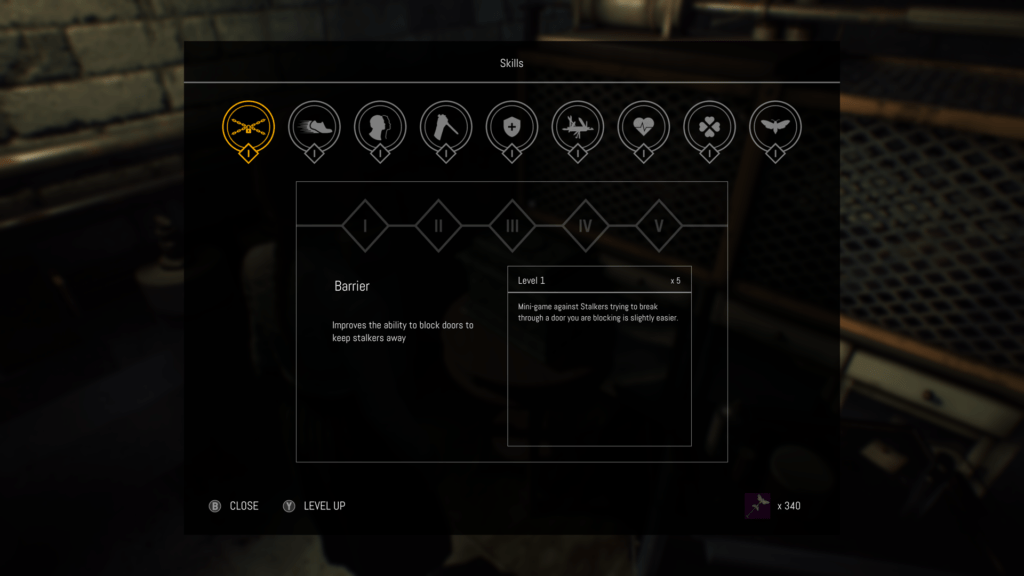 Countless interaction prompt issues prevent items from being picked up, things from being opened and enemies from being attacked. Volume drops in and out across the board whether it’s dialogue, sound effects or music with no rhyme nor reason. Audio constantly falls out of sync with the characters facial animations and sound effects can dip out mid-effect and not return.

Doors not opening and enemies hearing me from a different room, despite my crouching and know EXACTLY where I am hiding are not near as frustrating as my save file that on every occasion reverted to my very first save.

I tried 4 playthroughs across two different Xbox One’s, an X and an S, each with the same disastrous results. Reverting to that one save point, losing any and all items in my inventory, inability to upgrade and regular crashes to the dashboard made progression a nightmare.

The overall presentation is difficult to describe, compliment or put down as it is simply not consistent enough to get a feel for how much of a difference it could have made.

Visually, the lighting is very impressive but the character models and animations leave much to be desired. The environmental design of competent but regular texture pops either add or remove any detail with alarming regularity. 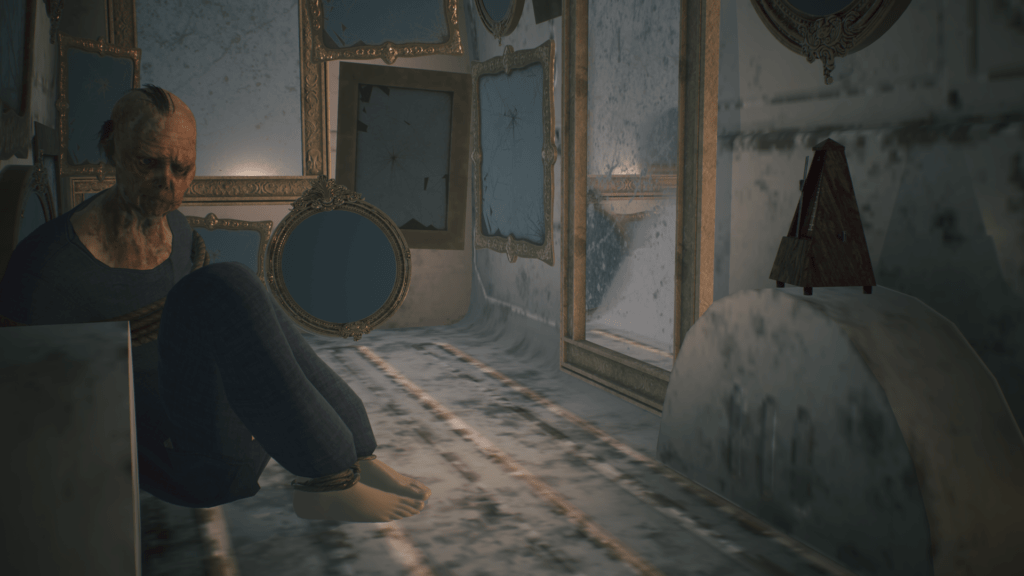 Aside from the audio issues outlined earlier, the voice acting is extremely hit and miss and the dialogue feels very forced. Constant use of profanity, especially towards teenage Jennifer that suggest regular promiscuity is overly used and feels out of place and inappropriate. I personally take no issue with offensive language in video games but when it’s used without context or so freely it loses its effect.

The story and premise is intriguing and the characters are realised through deep exploration of their backgrounds. Character depth and motivation is largely successful in Broken Porcelain, as is the gameplay concept and cool enemy design. 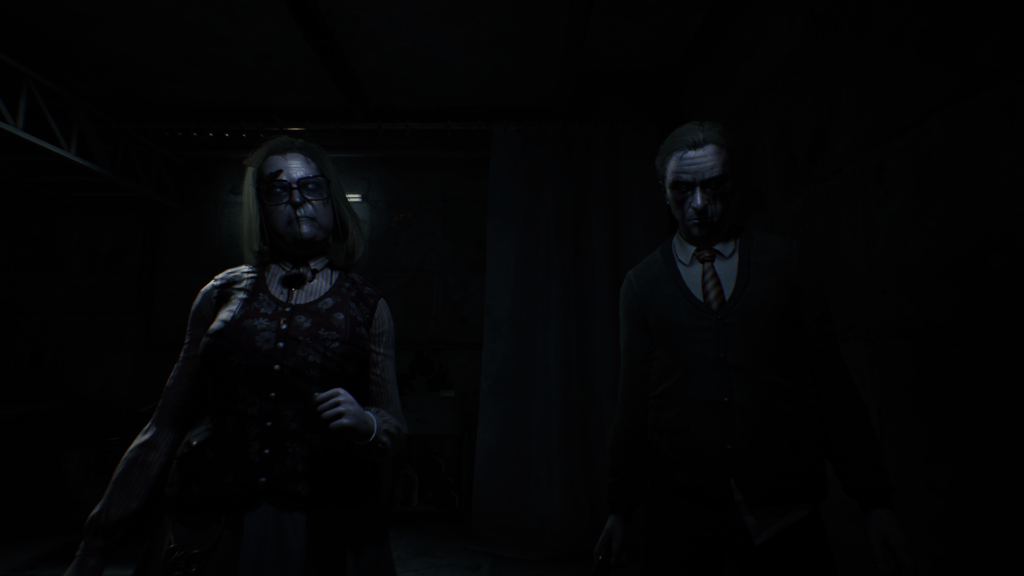 Coming into Remothered: Broken Porcelain with anticipation after enjoying Tormented Fathers, it really is a shame how broken this game is. In all my years of video games I have never experienced something so unplayably broken. 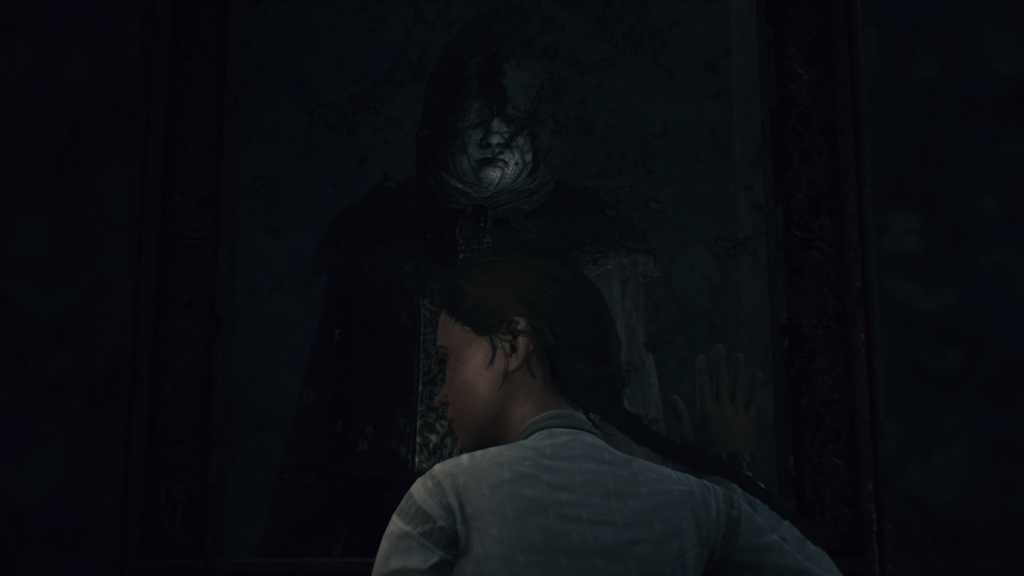 I have no doubt a number of these issues can be fixed through frequent and regular updates but until then I am unable to recommend this title. There’s a decent game in here somewhere but whether that can be rebuilt from the broken state it is in now, it’s uncertain whether it will see the light of day.

NO SCORE AT TIME OF PUBLICATION

I will return to this review if/when the game is fully playable and a verdict can fairly be assigned.