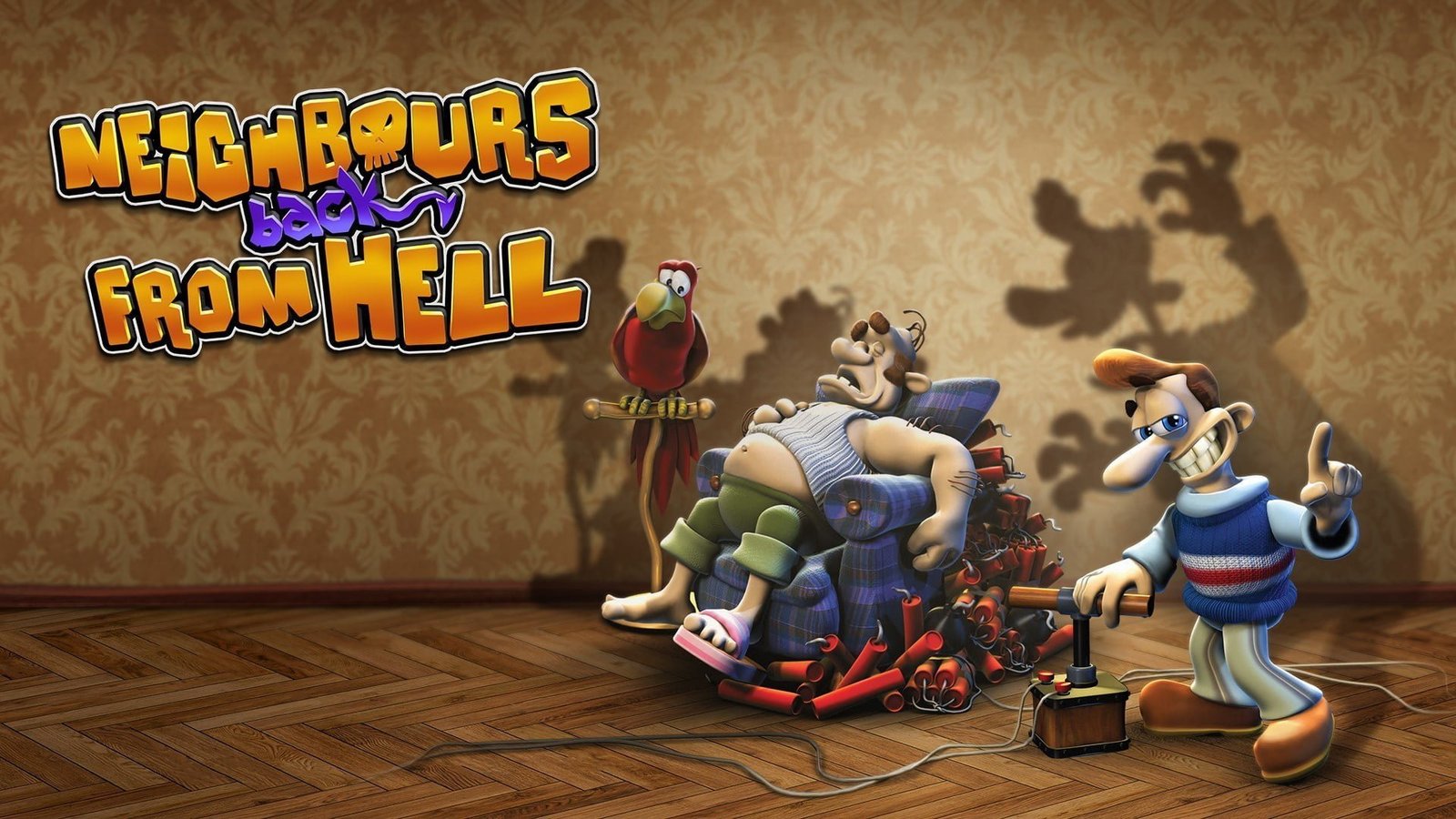 Revenge is a dish best served… on national television

Neighbours Back From Hell is a compilation of the first two Neighbours From Hell titles released back in 2003 and 2004. The premise is entertainingly silly with Woody seeking revenge on, you guessed it, the neighbour from hell, Mr Rottweiler. 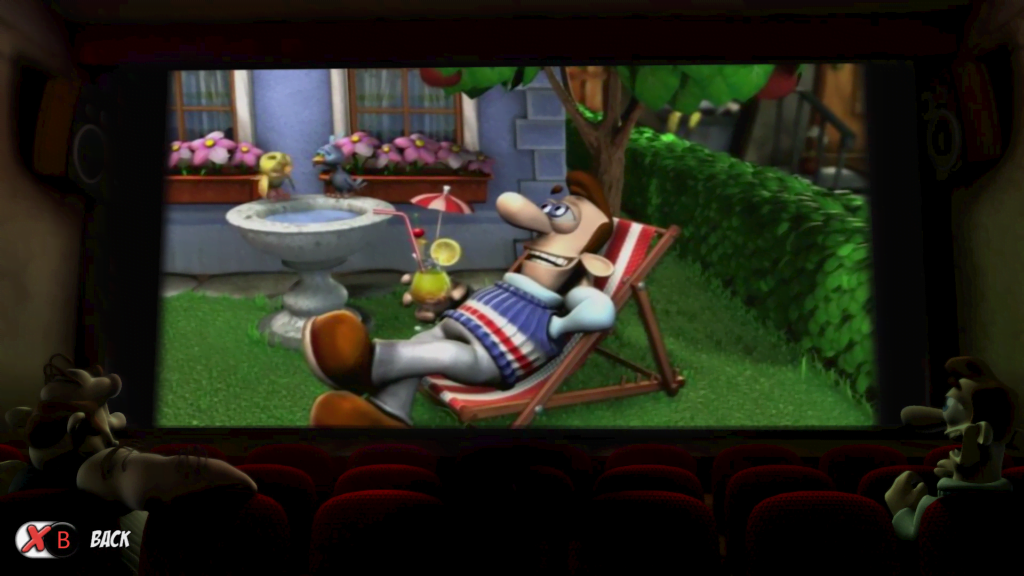 Woody calls the TV crew of the self-titled TV series to capture his quest for revenge which the player gets to enact. Essentially a combination of point and click and hide and seek, the player must observe Mr. Rottweilers pre-determined path and sabotage objects to infuriate him.

Neighbours Back From Hell is broken into 4 seasons, with each level acting as an episode of the TV show. The first two seasons, which are comprised of the episodes of the original 2003 Neighbours From Hell are set in Mr. Rottweiler’s home, with only a few rooms to play around in initially before more floors of the house open up with progression. The last two seasons take place in episodes from the 2004 sequel where Woody has followed Mr. Rottweiler and his mother on his holiday on a cruise ship and exotic destinations. As with the home based episodes, these open up with progression.

Switching the blue wire with the red wire

The players objective is to upset Mr. Rottweiler a certain number of times, as indicated by medals awarded at the top of the screen, before the exit becomes available. To do so, there are several interactable objects that can be tampered with or picked up and combined with other objects. For example, if Mr. Rottweilers path has him making a coffee, laxatives can be found and added to the brew so that the next cup of coffee will have him rushing to the toilet to… yeah. Mr. Rottweiler appears to be a creature of habit so he always does things in the same order that constantly repeats. A thought bubble above his head indicates where he’s off to next or what he might be going to do. These act as not just prompts to know when he will be leaving the room for Woody to sabotage something but also to give a clue that what he might be doing or the path he takes to get there can be tampered with. There variety of pranks Woody is able to pull on Mr. Rottweiler are amusing and it’s fun to excitement with every option available. It sounds rather simple but there can be tight windows of opportunity to set these pranks up before Mr. Rottweiler returns. As soon as the player is spotted, Mr. Rottweiler rushes over and beats the player down, kicking them into another room or floor of the location. After being caught and whooped three times, the episode must be restarted. Given that most can be completed in as little as 5-10 minutes this is not too severe of a consequence for failure.

All eyes on Woody

Initially, it’s just Mr. Rottweiler that Woody has to avoid while setting up his pranks. With progression comes pet birds or dogs that will alert the evil neighbour to Woody’s presence and the player will need to retreat and hide until Mr. Rottweiler calms down and returns to his path loop. The two later seasons have mumma Rottweiler also keeping her ears and eyes open for any mischief and she too will give Woody a good spanking if he is caught. 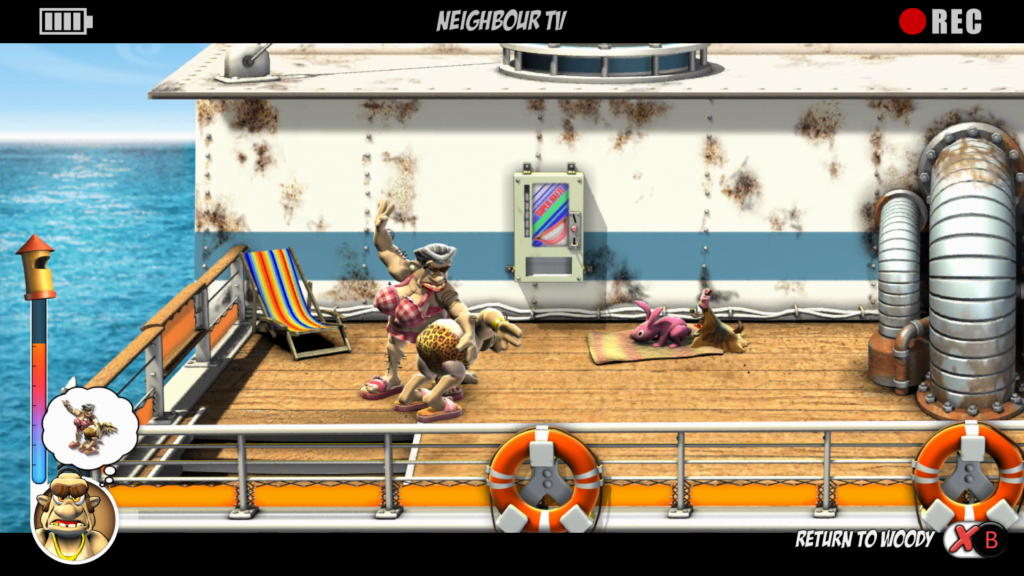 There’s not an overwhelming difficulty to the game but having to keep an eye on both potential booty kickers while utilising the tight time windows to prank either of them is just enough of a challenge to keep players on their toes. An effectively cautious player will be able to complete the game in as little 2-3 hours.

Neighbours Back From Hell has a very Wallace and Gromit-like claymation visual design that feels as playful and and fun as the mischief that comprises the gameplay. As with the overall experience, it feels light and doesn’t take itself too seriously. The canned laughter that breaks out upon Mr. Rottweiler succumbing to Woody’s pranks adds to the levity and overall entertainment of the presentation. Finding the joy in revenge

Neighbours Back From Hell is an entertaining and brief adventure at the expense of a naughty neighbour. The variety of pranks are fun and silly enough to keep the game feeling amusing with just the right amount of challenge. Players that enjoy putting their problem solving skills to use will enjoy the pattern observation and switch this with that type gameplay while even a casual player will be able to find joy in Woody’s filmed quest for revenge.

– Feels a little too short

– A difficulty option would add replayability