Crash, Coco, mystical masks and the evil Dr. Neo Cortex, the key ingredients of this fourth main entry remain the same. Bringing them all together again… it’s about time!

Crash Bandicoot first spun his way into the hearts of gamers worldwide back in 1996. Countless spin-offs have seen Crash embark on adventures and races across generations of consoles and devices and as Crash nears his 25th anniversary, his friends and evil nemesis join him in Crash Bandicoot 4: It’s About Time.

Despite being the eighth main entry title, It’s About Time is the 4th chronological entry that takes place after the events of Warped, the third entry in the recently remastered Crash Bandicoot N.Sane Trilogy. Everything players love about Crash is here and better than ever.

The clever title of Crash’s return sums up not just the hiatus Crash has seen since his last main entry release but also the story. Sent through time to retrieve 4 mystical masks with special time and space manipulating abilities, Crash and Coco explore a pirate haven in 1717, a sanctuary of worship in 1402, a grungy  bayou “a few days ago”, a prehistoric volcanic island 88 million B.C.B (Before Crash Bandicoot) and 6 other unique and creative environments.

Crossing paths with old friends and foes alike, Crash and Coco are not alone on their quest. An alternate dimension version of Tawna, Crash’s original love interest and old time foe Dingodile, the aptly named Dingo-Crocodile hybrid are also playable in specific story levels. They each have unique gameplay which makes them all the more fun to play as. 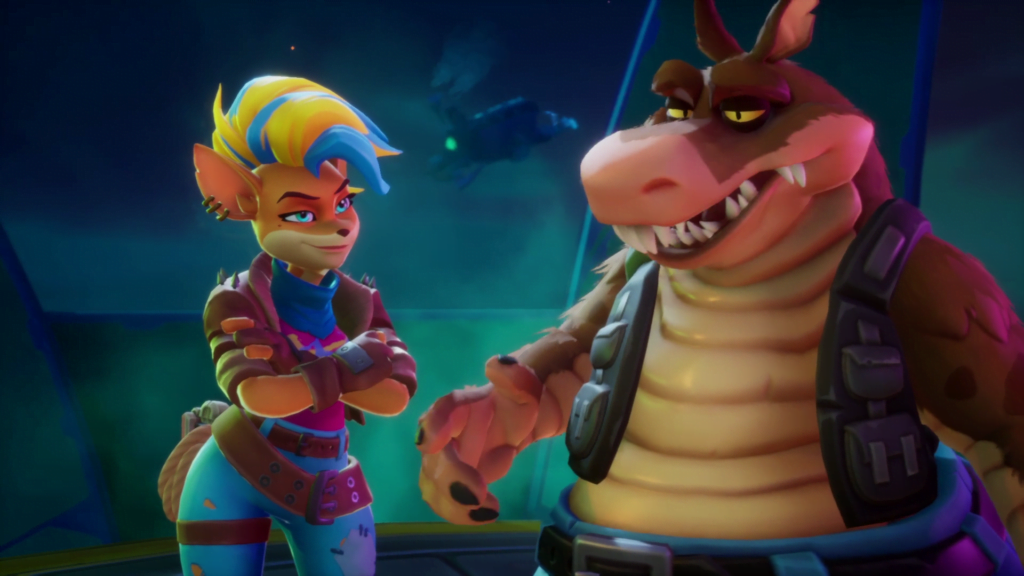 Tawna has a grappling hook which can be used to smash boxes and enemies, as well as for traversing the environment. The inclusion of wall jumping for Tawna showcase her as very agile butt-kicker with a stiff but strong style of combat. 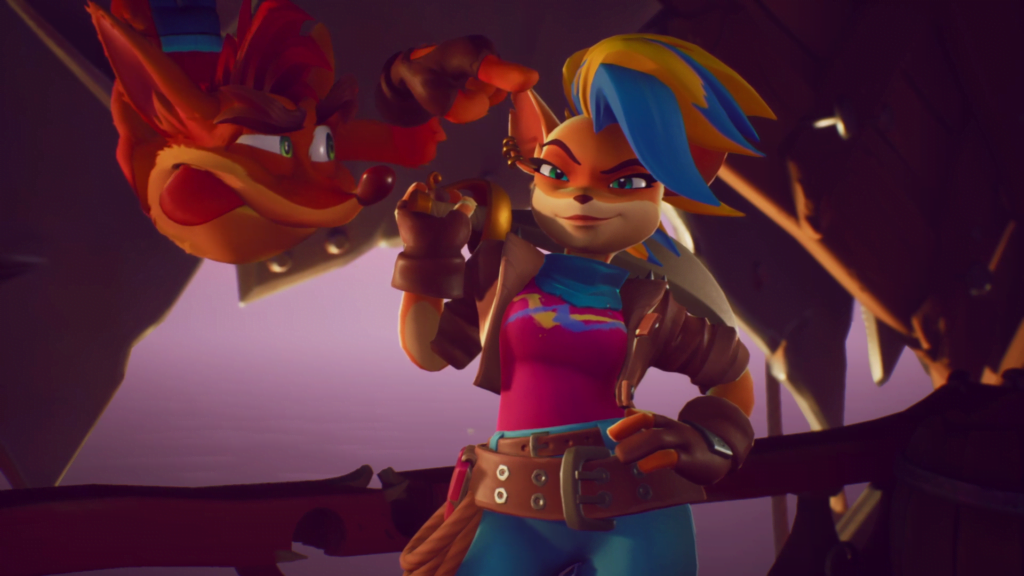 Dingodile is able to use a dodgy looking looking blower to suck boxes and fruit into it but also TNT boxes that can then be launched at enemies or environmental obstacles. Alternative use of this cannon see it blow air downwards to allow Dingodile to temporarily hover before finishing with an upwards boost to to traverse and reach higher platforms. 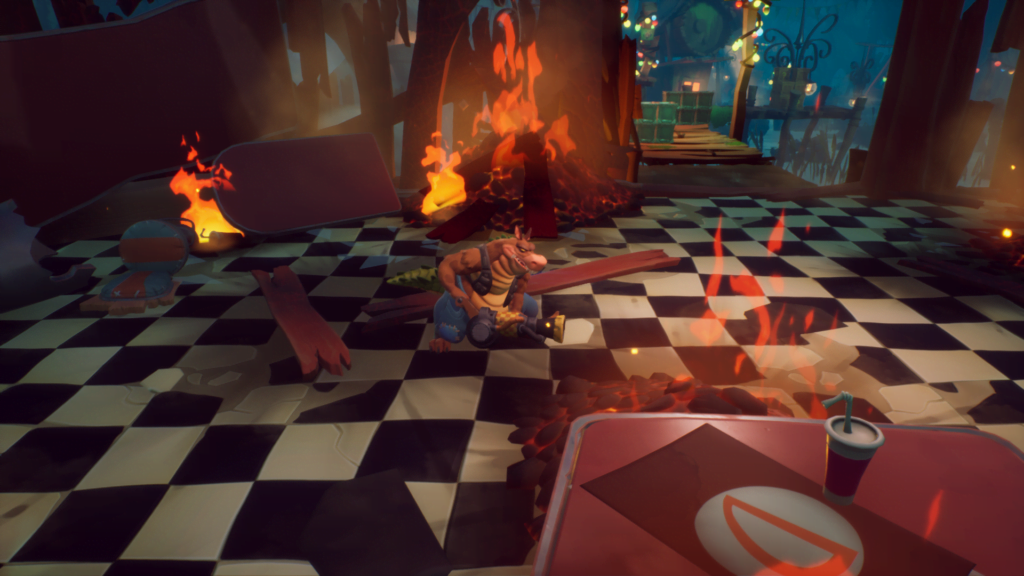 The evil Dr. Neo Cortex himself is also playable in limited story levels, using his modified ray gun to turn his enemies into solid or gelatinous platforms to allow him to navigate the levels due to his inability to double-jump. 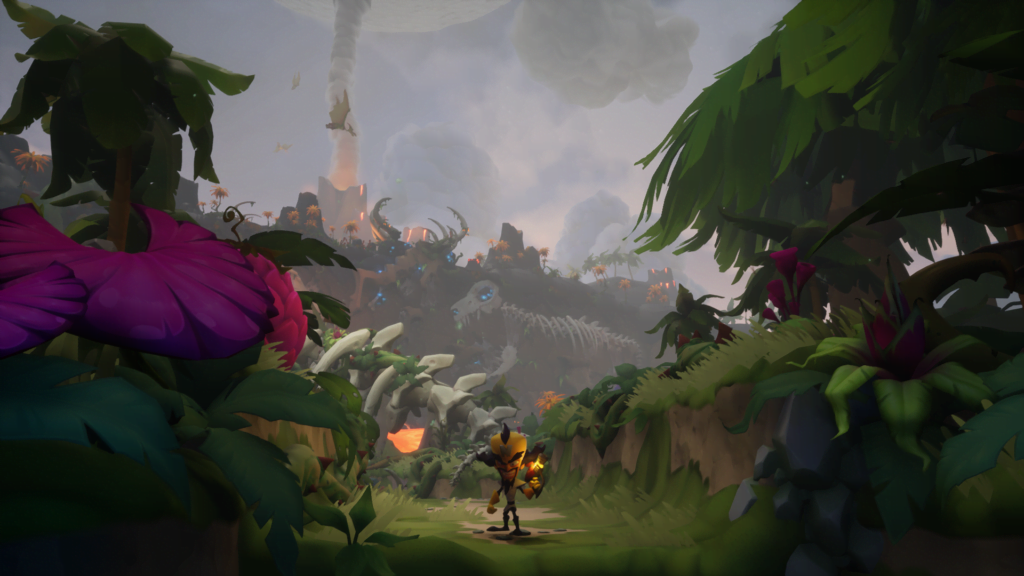 All 3 of these characters are also playable in their special Timeline levels. These levels are variations of existing ones, starting as the specific character and playing through a unique portion of the level until reaching a pre-determined point that occurs in Crash and Coco’s primary version of the level. At this point, a clever sequence plays out that explains the cause of certain events in the initial playthrough, such as a bridge being destroyed or enemies being wiped out mysteriously. These Timeline levels are completely optional but are well worth checking out in order to play as these additional characters. 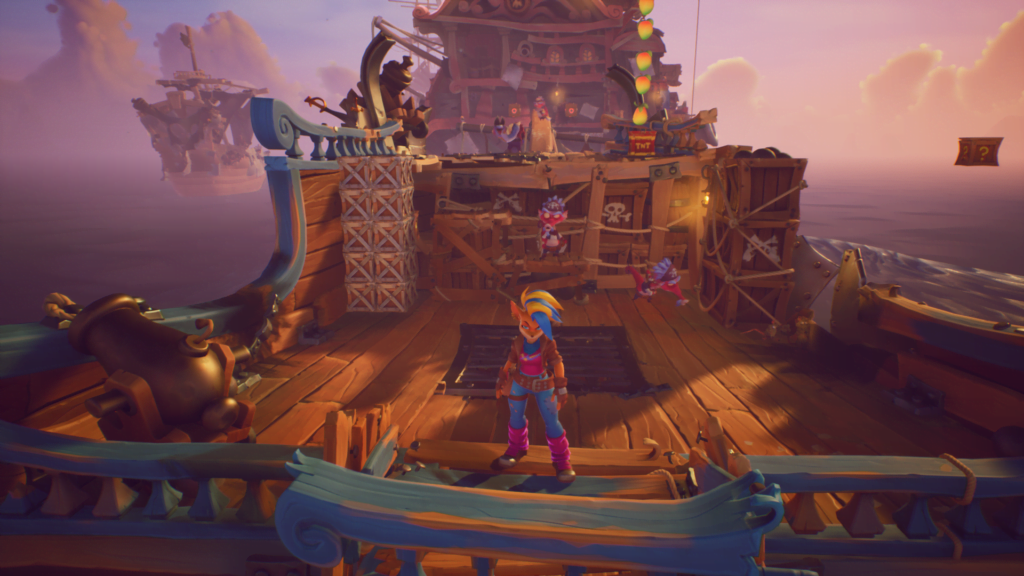 Throughout the story, the player returns to the Dimensional Map hub in between levels. Here, aside from progressing the actual story the player can replay previously completed levels, take on the optional Timeline levels, completing Flashback Tape levels are meeting the criteria to first unlock the tapes. 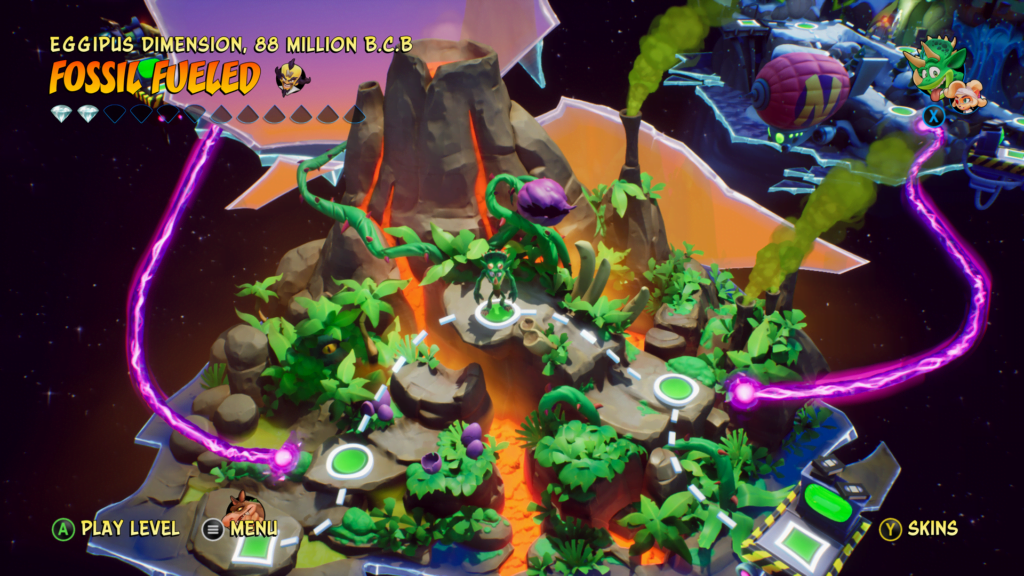 While here the player can switch characters and choose from over 25 skins for each Crash and Coco. Skins are unlocked for meeting certain criteria such a beating the game’s story or unlocking X amount of gems from specific levels. 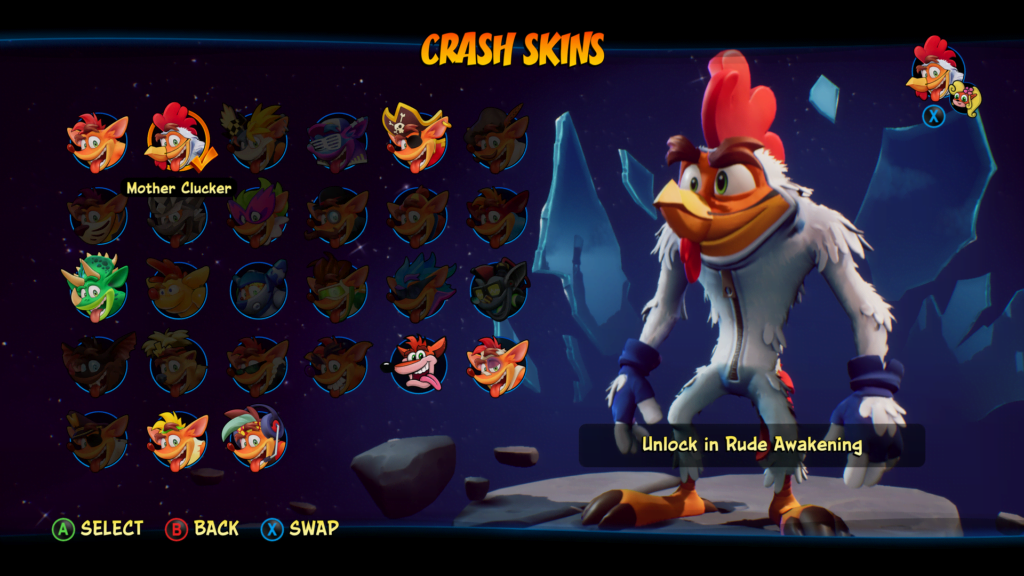 Classic chases sequences return including being chased by a Tyrannosaurus Rex while the ground crumbles and outrunning a killer Mad Max-like frankenstein of a truck. A handful of animal rides return as do brief boat sequences. The variety within the story mode is great and feels familiar yet fresh. 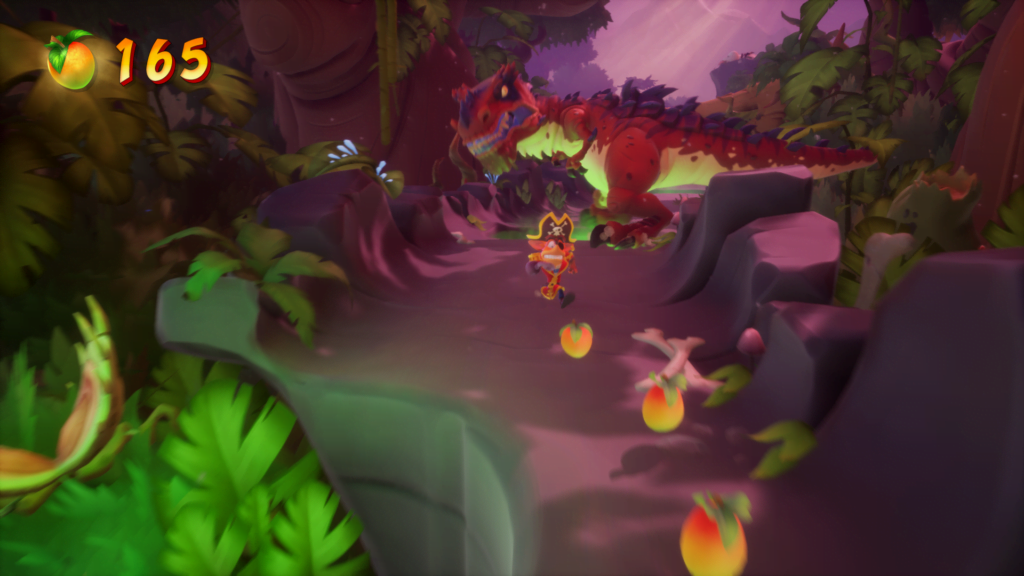 The story itself is fun, offering playful nods to Crash’s previous adventures while presenting a playfully engaging narrative full of satisfying directions and unlikely alliances. The story can take as little as 6-8 hours if just progressing through the 30+ main story Levels but this time is highly dependent on skill and whether the player is exploring every inch of each level to unlock all of the gems or experience the alternative modes on offer.

Crash Bandicoot has notoriously put players to task when it comes to completion. Beating the story is just a small taste of the experience these games offer. Throughout each Level the player is able to accumulate Wumpa fruit, acquiring 100 of which will reward the player with an additional Life. Collecting 40, 60 and 80% of the Wumpa fruit within a Level will award a clear gem for each milestone. Smashing all of the crates within a Level will award another as will completing the Level in less than 3 deaths and finding a hidden gem. This results in 6 clear gems per Level on offer… in Normal mode at least. 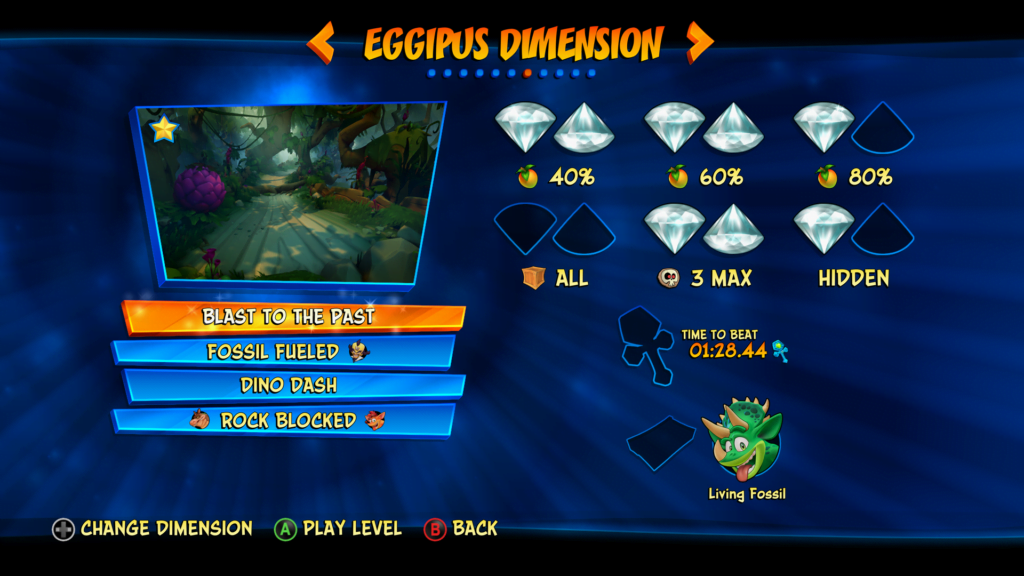 Selecting a previously completed Level will allow the player to replay it in N.Verted mode. This mode presents the Level in a wild and creative alternative format. For starters, the Level is mirrored. Instead of moving to the left to progress the player now moves to the right. The most impressive change to this mode however is the incredibly diverse and unique visual aesthetic that brings it to life. 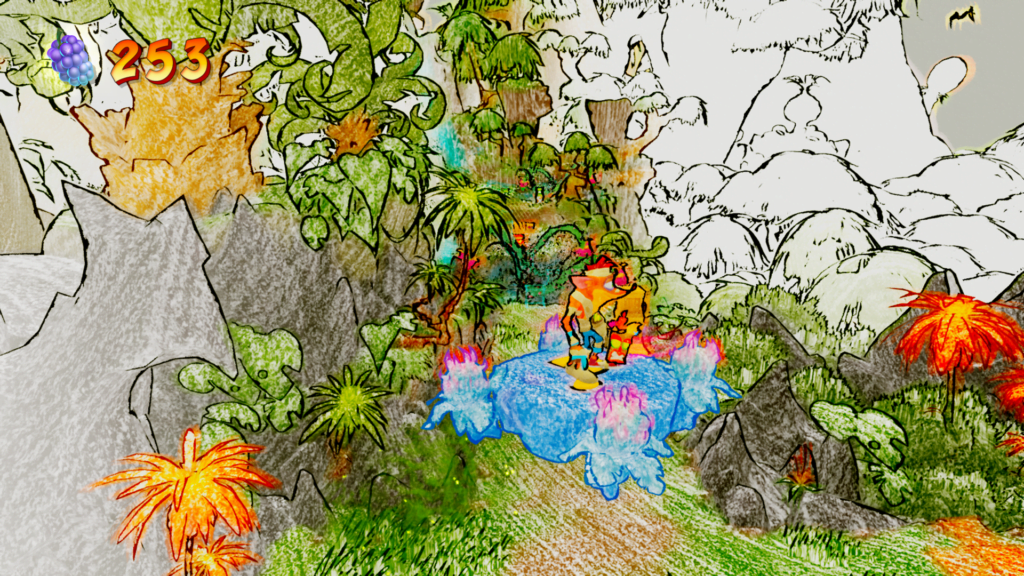 Some Levels are now black and white with the exception of characters, creatures and interactable objects. Using the spin attack fills the immediate area with a splash of colour, similar to paint being thrown at a canvas. This contrast is stunning and breathes a whole new life into every Level on offer. Alternative visuals such as appearing in negative or in the art style of hand drawn with crayons type aesthetics are an absolute joy to experience. The presentation of these modes is so fun, wild and weird in the most wonderful of ways. 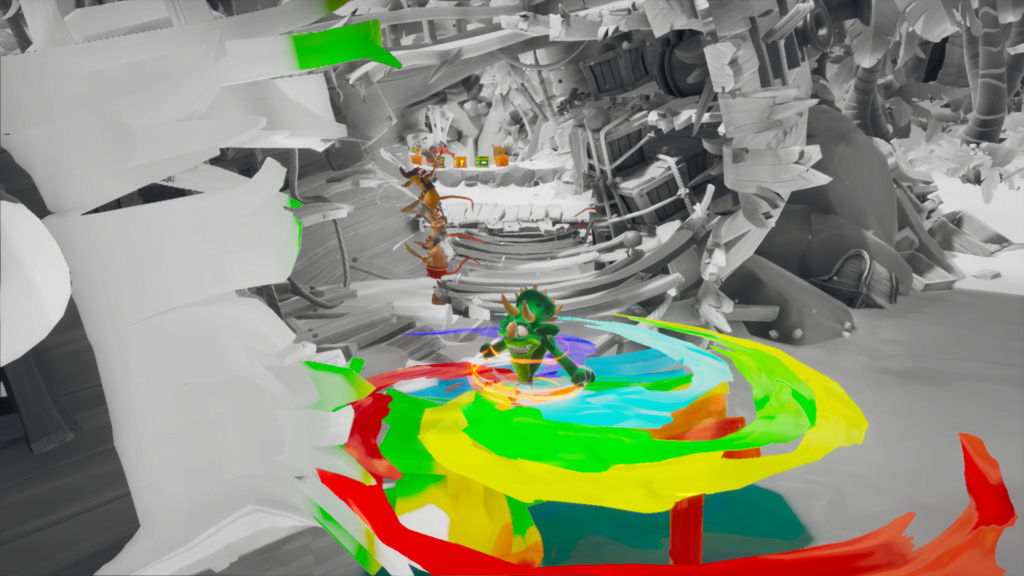 These N.Verted variants to each Level also offer 6 gems for meeting the same criteria as the Normal mode.

On top of the Normal and N.Verted versions of each Level, the classic Time Trial mode returns requiring the player to beat each Level has fast as possible that is notoriously difficult.

These platforming playgrounds offer a variety of fun and familiar elements from the series while introducing new mechanics that largely go hand in hand with the special abilities of the masks. Inverting gravity, slowing time, phasing environmental objects in and out of reality and embracing dark matter energy to create a purple whirlwind of chaos are a lot of fun to master. 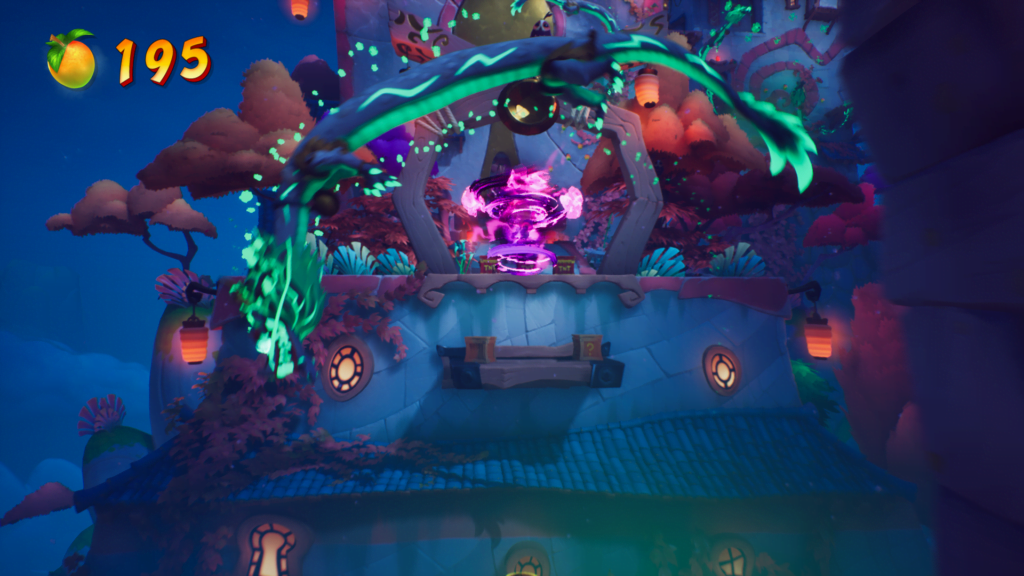 The mask abilities are triggered by picking up their respective masks at pre-determined locations within each level. These add an interesting and sometimes challenging dynamic to the gameplay and continue to push players with the practice makes perfect mentality. Trial and error is a consistent part of a Crash Bandicoot experience for most players but the difficult sequences are typically overcome as the mechanics become more familiar.

One of the greatest new mechanics introduced is a yellow ring beneath the players character that allows for better calculation of jumps and where they will land. This makes the platforming significantly easier than past titles and is one of the best additions to the classic gameplay formula that has withstood the test of time. 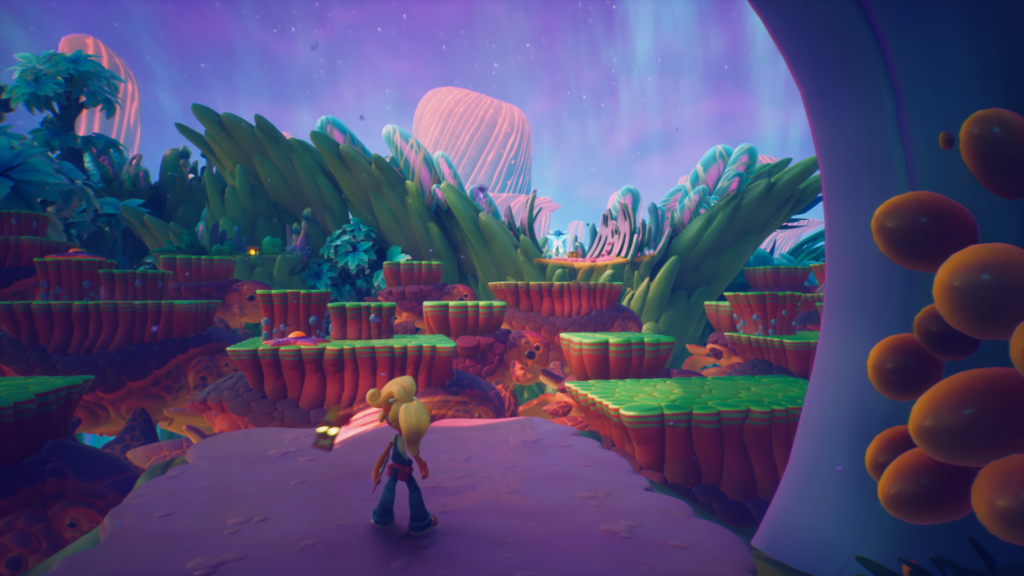 Despite this new feature, the platforming and environmental hazards are still going to test players’ abilities and their patience. Constantly engaging and requiring mastery of all mechanics at their disposal, players will still need to be smart when considering the wide variety of hazards such as electric laser beams, fire, enemies themselves and many, many more things that can and will kill our favourite spinning marsupial.

Repeated failure between checkpoints sometimes leads to a new one being dropped in. This eases frustrations for casual players in particular as some of the late game platforming can be quite challenging.

The boss battles are just as fun and creative as per previous Crash instalments. The attack patterns and windows of opportunity to strike the boss are easy to become familiar with and each encounter is completely different than the last. 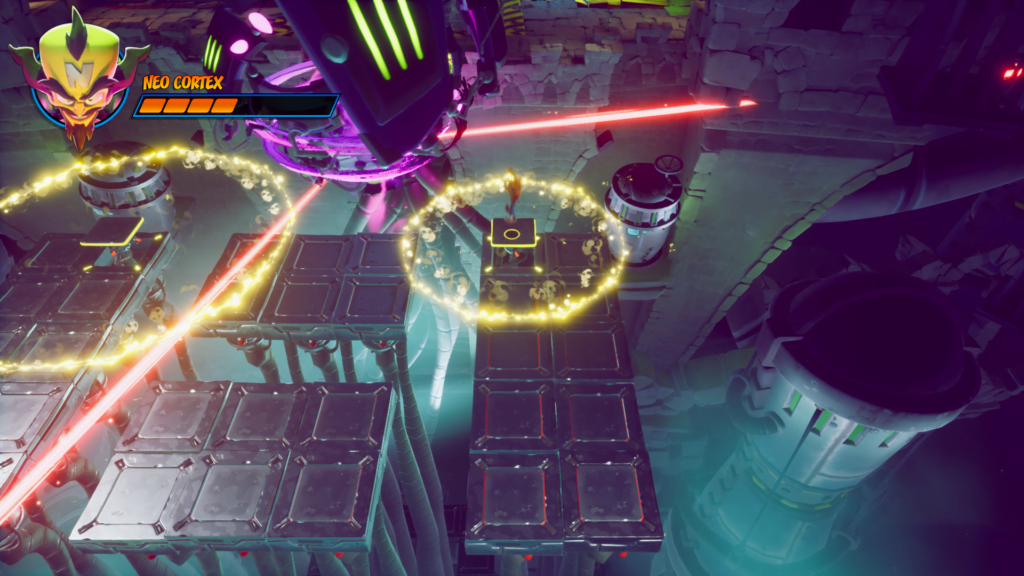 Couch co-op pleasantly makes it’s way into this latest adventure in a handful of ways. The Bandicoot Battle mode allows up to 4 players to participate in the Checkpoint Race and Crate Combo modes. 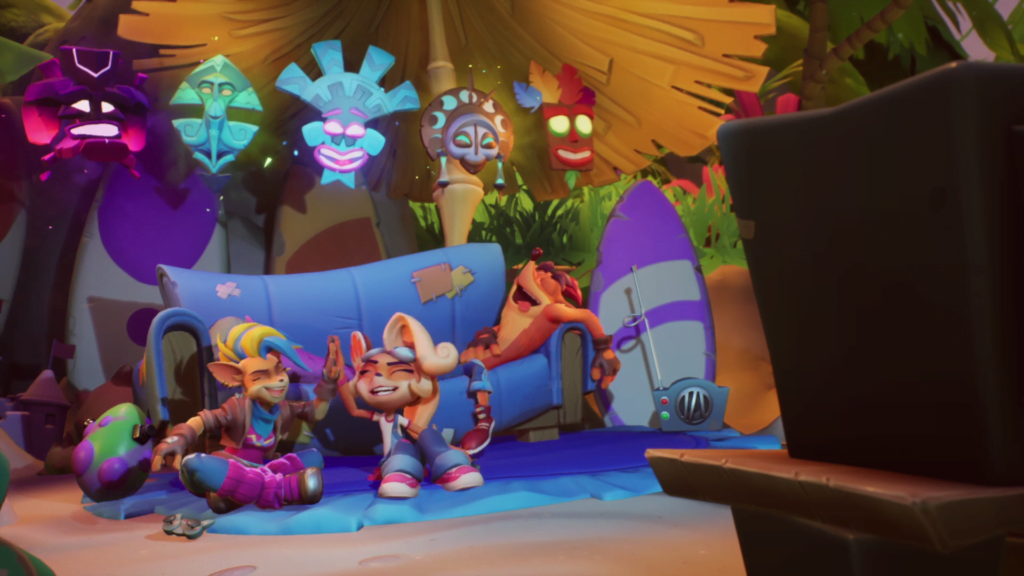 In Checkpoint Race, players take turns seeing who can get to each checkpoint the fastest before another player attempts to be faster. Whoever wins the most checkpoints by the end of the Level wins.

For Crate Combo, players must break as many crates as possible while maintaining a combo meter between checkpoints. The player with the most points at each checkpoint wins the game. 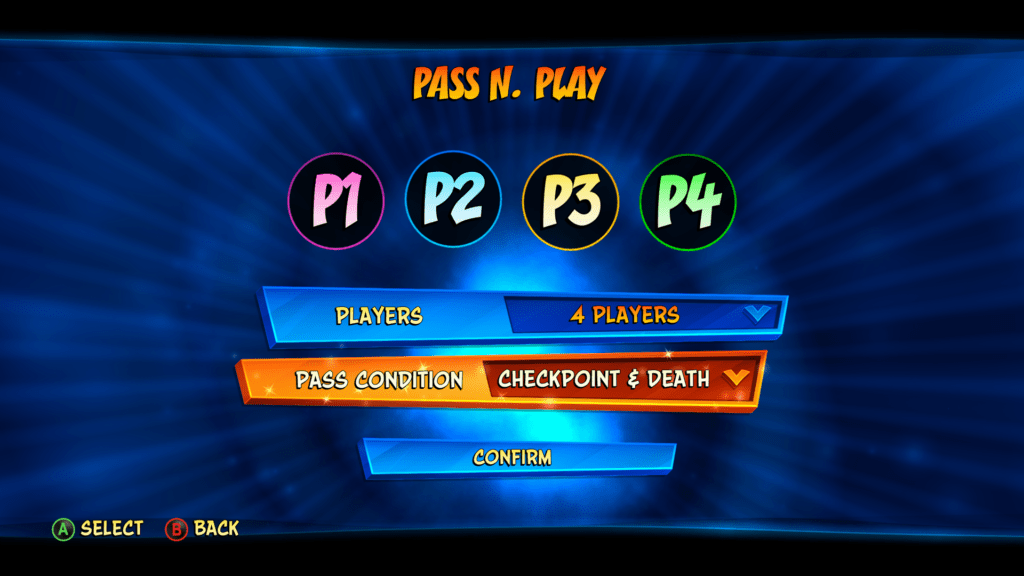 25 Levels are available to play either of these co-operative modes. As far as the story is concerned, players are able to select Pass N. Play from the menu to allow up to 4 players locally to pass the controller to the next player upon Checkpoint, Death or both. This is a fun way to include friends, family or kids to engage in some playful competition in an experience that is a delight for players of all ages, fans of Crash or newcomers alike. 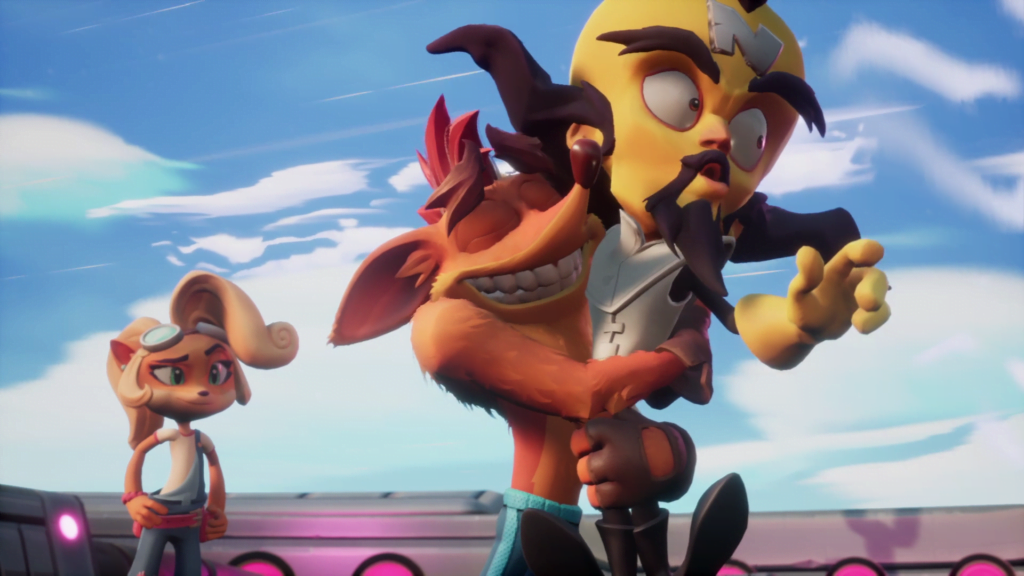 From the beautifully creative and vibrant environmental design, varied and playful enemy designs and an incredible package of N.Verted modes, Crash and the worlds and dimensions he explores have never looked better. Charming in its visual aesthetic and its addictive gameplay elements, an incredibly fun score accompanies the presentation that brings a variety of fast and slow paced melodies to reflect the dimensional changes and the playable environments and the sound effects are just as enchanting. 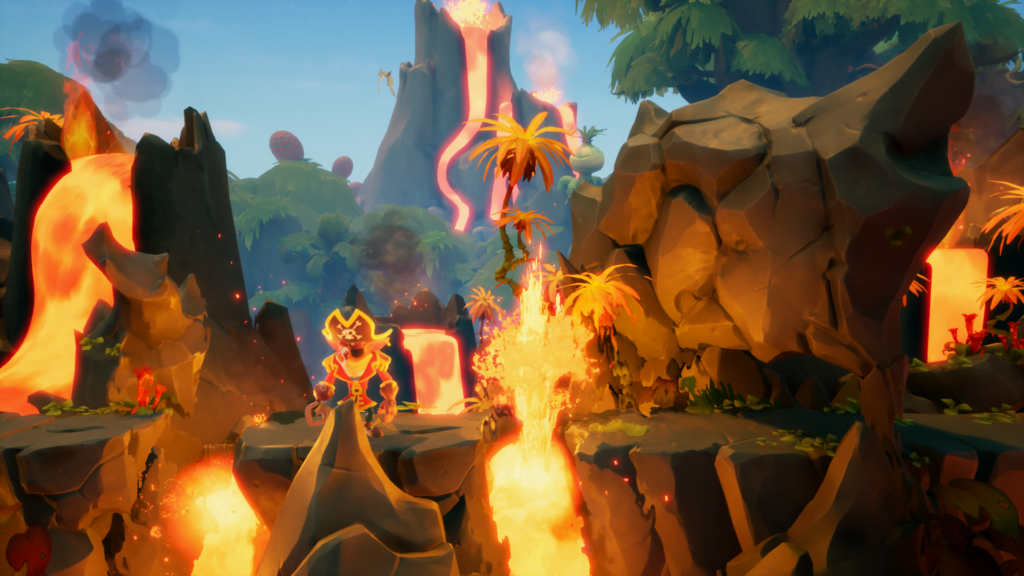 Crash Bandicoot 4: It’s About Time is the complete package in terms of the overall presentation. A classic formula that has been modernised to near perfection with a visual charm that is inescapably mesmerising, Crash’s latest adventure is arguably his best. By taking the very best from over 2 decades worth of Crash Bandicoot titles and making everything even better, this is a definitive Crash Bandicoot experience that is a must play for players of all ages or levels of familiarity with this lovable orange mascot. Crash has helped define a genre and generations of players and this latest instalment suggests Crash has a lot left in the tank, both as a character and an enjoyable and engaging franchise. 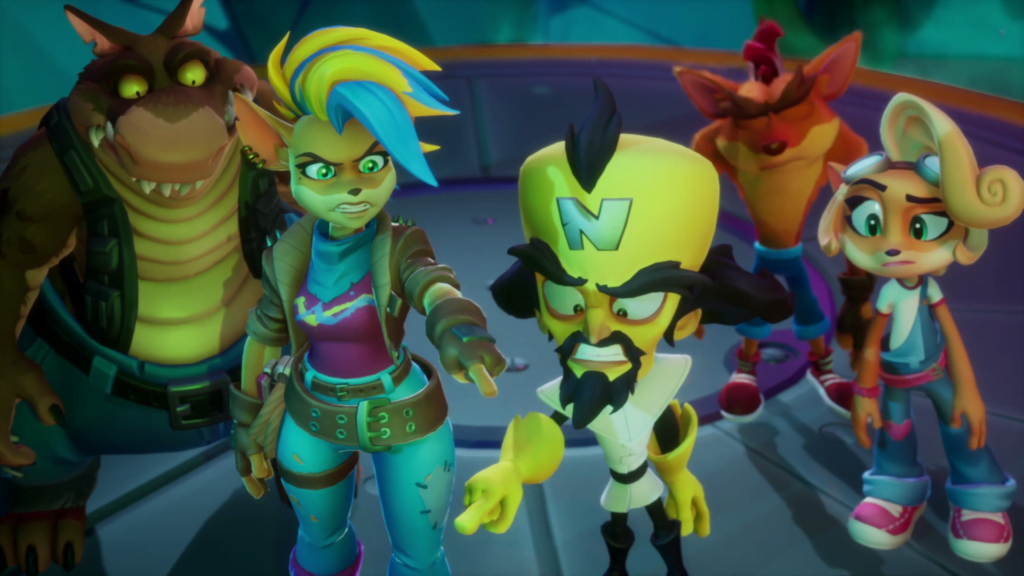 + Variety of Level types and skins

– Late game platforming can be challenging for casual players

Developed by: Toys For Bob

Platforms: Xbox One and PlayStation 4