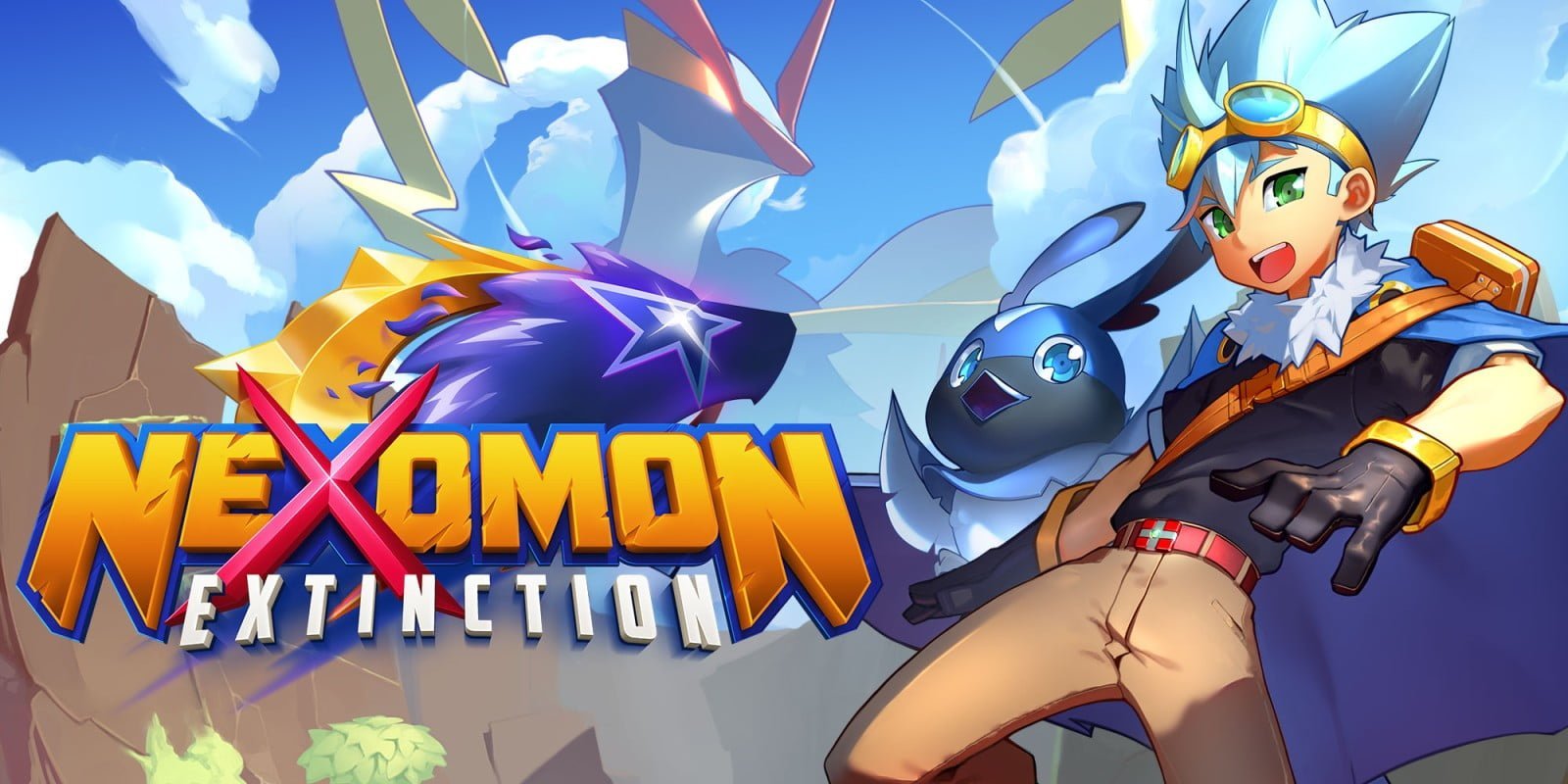 Nexomon: Extinction feels familiar but it’s the originality of its story that is surprisingly full of heart that truly sets it apart from the competition.

This monster catching adventure is a turn-based RPG and uses a formula extremely similar to the wildly popular Pokémon franchise. While the core concept is the same, Nexomon: Extinction paves its own way with some unique concepts and a narrative that surprisingly excels to heights the genre hasn’t seen before.

Written in the stars

A dramatic prologue opens Nexomon: Extinction that depicts the downfall of the merciless Omnicron, the tyrannical King of Monsters to all Nexomon. Declaring war on mankind, the humans took a stand and tamed the Nexomon, turning them against Omnicron and ultimately defeating him. With Omnicron defeated, Nexomon and humans co-existed in prosperity… until now.

The player starts out by selecting their appearance and name, both of which are customisable at any time throughout the game within the menu. Within moments the player is introduced to Tyrants, wild and unruly Nexomon that are the alphas of their kind. This encounter sets up the players selection of their starting Nexomon, with 9 to choose from across an array of different elemental types, officially becoming a Tamer in the process. The conclusion of this epic first battle sets in motion the adventure our hero must embark on to discover the nature of this attack. 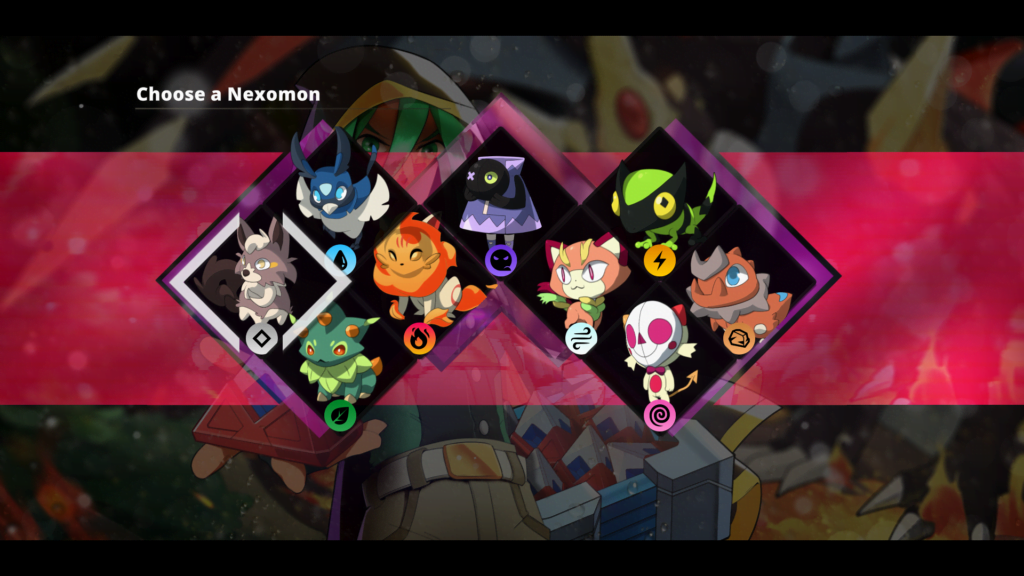 On the surface, the story seems fairly predictable. The player, now a Tamer, registers with the Tamers Guild and must ascend through the ranks by completing quests and earning reputation points. The narrative that unfolds alongside this is unlike any found within other monster catching series.

An abundance of optional side quests and trade opportunities can be found throughout the land that can be completed during and after the main story. The quest variety is a little generic, largely consisting of fetch quests or obtaining certain Nexomon or items for trading but their rewards are well worth the effort. 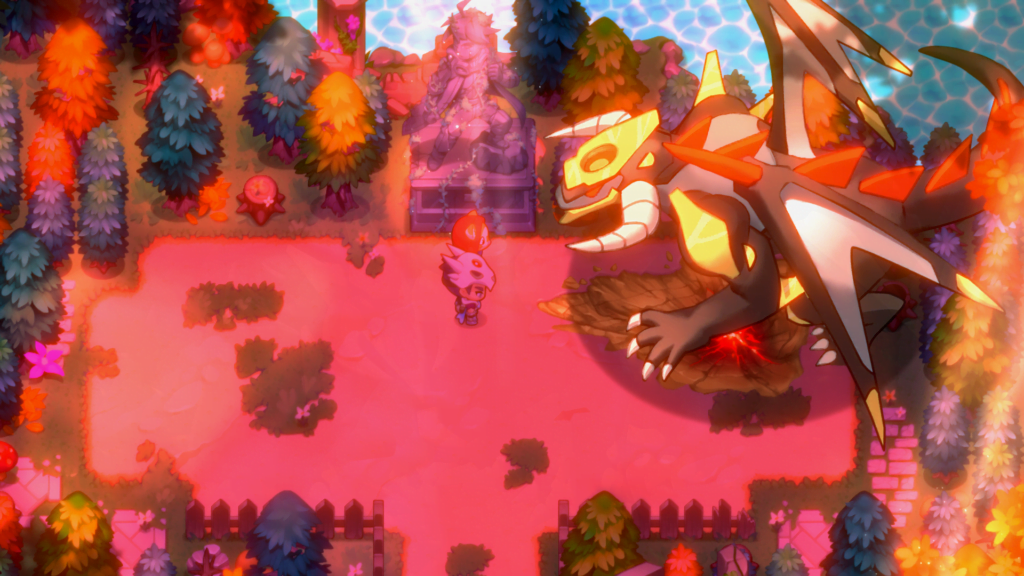 The player character does not speak but their backstory is wonderfully brought to life through the dialogue of others from both within and outside the walls of the orphanage they have grown up in. Their journey is not as simple as defeating other Tamers for notoriety.

An incredibly deep, well crafted and surprisingly layered journey of self discovery is at the heart of Nexomon: Extinction. The player is no ordinary Tamer but rather a Tamer with extraordinary responsibility and a destiny that reveals itself gradually throughout the roughly 20 hour story.

Backtracking is necessary with regularity and is made easier by the use of Warpstones locates at each major region. Simply interact with one and the player can be transported to any other they have activated, which is as simple as pressing a single button upon discovery. 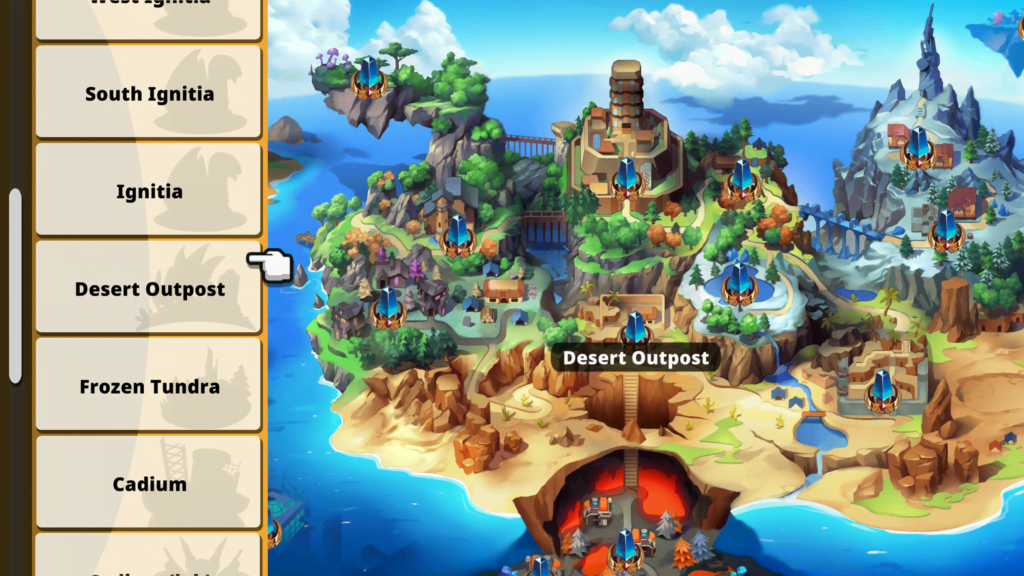 Nexomon: Extinction tells a powerful story of purpose and responsibility. Weaved seamlessly throughout are the themes of tragedy, triumph and even comedy. The comic relief comes primarily from an anthropomorphic cat named Cocoa, not to be confused as a Nexomon. Cocoa is a sarcastic, wise cracking companion that is very self aware. Cocoa knows this is a video game and hilariously points out classic tropes throughout their adventure. The comic relief is welcome, especially considering the weight the story can sometimes thrust upon the player with its powerful revelations. 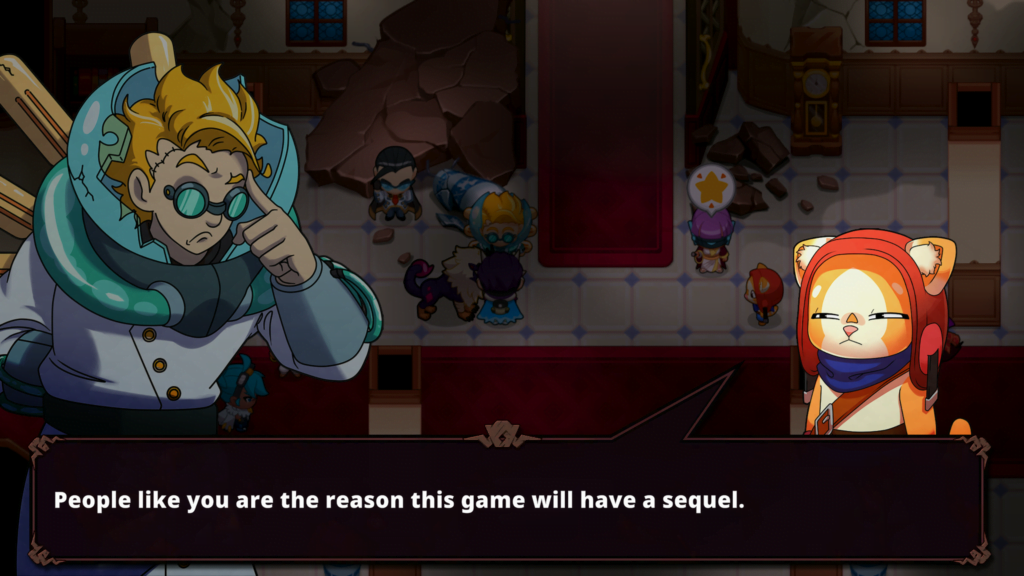 If there was a singular word to describe the story and journey of the silent protagonist hero, it’s heart. Heart in the story and heart in the characters. The journey is masterfully paced in terms of story progression and revelations. Playing out similar to a visual novel when it comes to character interactions, the overall story is far more animated than other titles in the genre and contains its fair share of cinematic-lite sequences which add to the overall immersion of the experience. 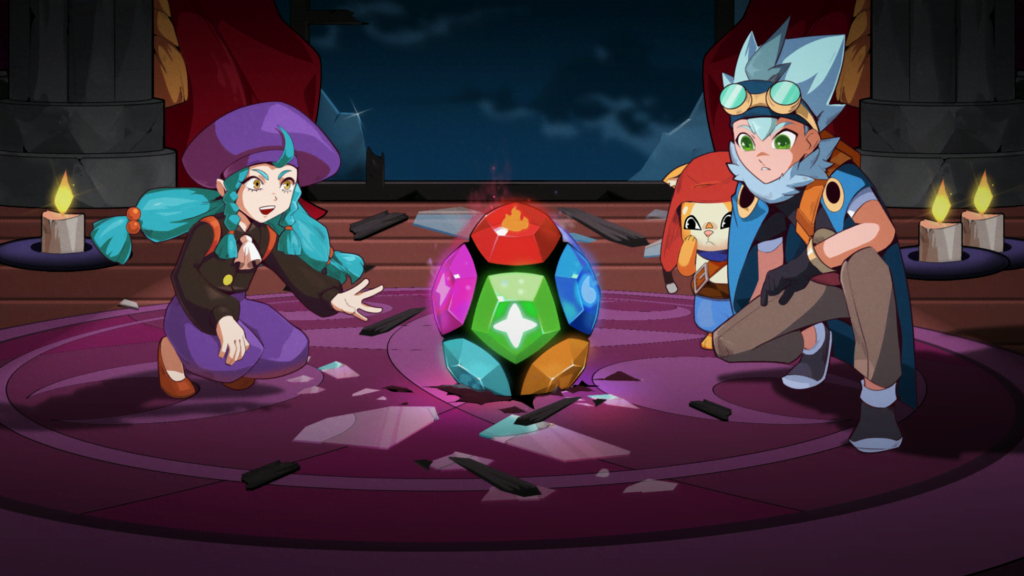 It’s easy to point out the similarities starting with the core concept of attempting to catch all 381 Nexomon and battle them against other Tamers to level them up and evolve them into new, more powerful variants. The designs of the Nexomon are unique and creative, due in part to the grand scope of the story. With the sheer amount of them available, it can be forgiven that there are a number of them that fail to feel a little more exciting. 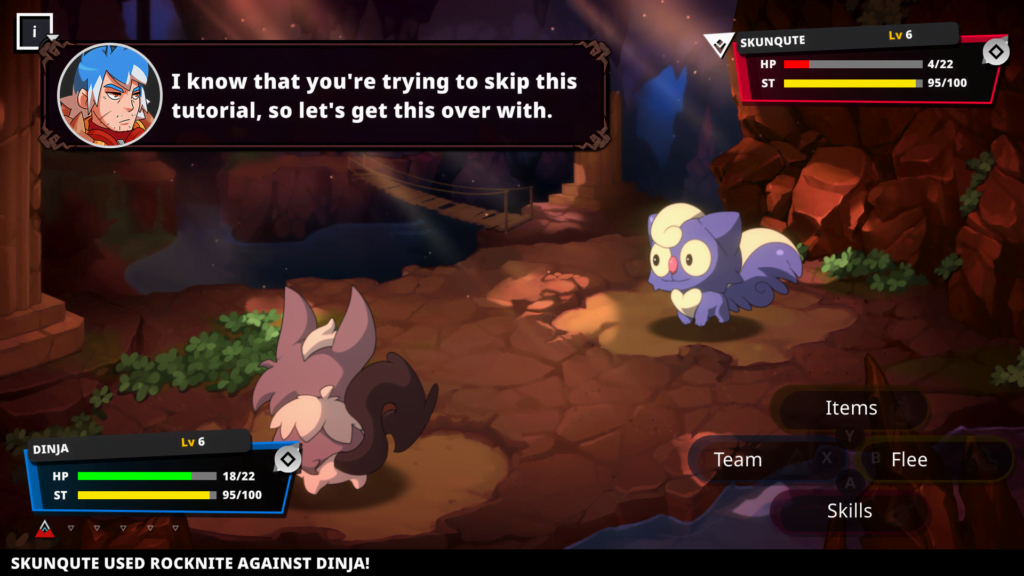 Considering the number on offer, it’s amazing to see how often Nexomon: Extinction gets it right with the appearances of its most critical component; the monsters. The nine starter Nexomon and their subsequent evolutions ultimately feel rather uninspired compared to what else is on offer.

The legendary variations of Nexomon come in the form of Tyrants, larger than life monsters that are the true powerhouses of the elements and the Greater Drakes, a variety of special Dragons. Majority of the Tyrants and Drakes play a role throughout the story but don’t become available to catch until after the credits have rolled, providing ample reasons to continue deep into the endgame.

Some of these legendary beasts are roaming the environment while others are locked behind an objective or two to complete before the encounter. 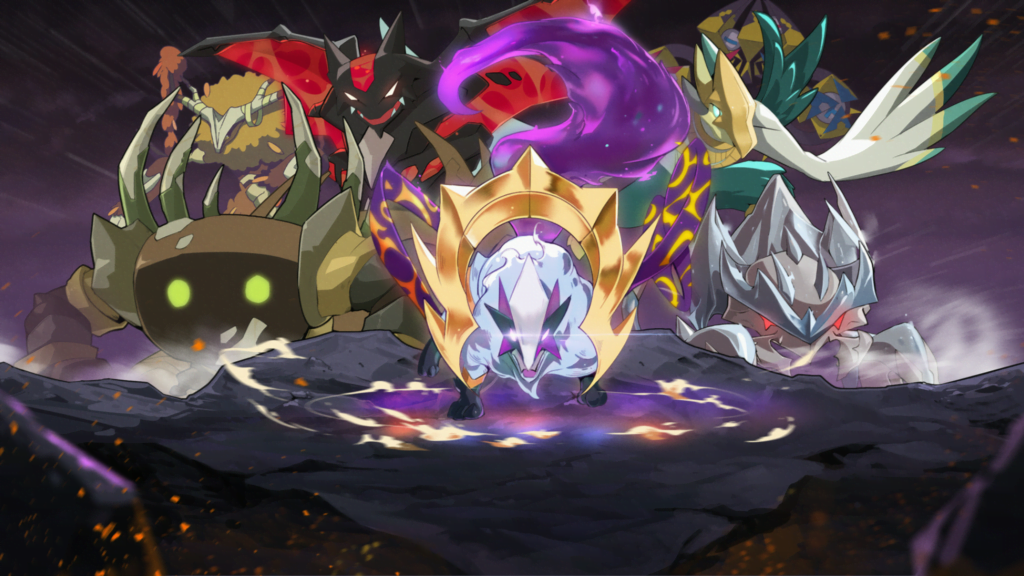 A fun addition is the ability to select a follower/companion Nexomon to accompany the player. This feature though doesn’t extend to any Nexomon the player has actually captured, instead offering 30 specific Nexomon to choose from, found in chests throughout the world or in the 9 hidden vaults that require special keys to be obtained to open. They can be changed at any time are a visual companion more-so than an actual, usable Nexomon.

There’s also no mistaking the familiarity of the turn-based combat system itself, with each Nexomon having up to 4 abilities that can be used in battle to weaken and defeat the enemies. New abilities can be learned as the Nexomon levels up by gaining experience from battle. They can also be taught by a character in each of the unique regions in exchange for money.

These abilities can either deal direct damage or rebuffs to an enemy or provide buffs and other advantages to the Nexomon using it. Use of each ability comes at the cost of Stamina. Each ability will consume the Nexomon’s stamina bar, with more powerful moves consuming more. This requires the player to be more strategic with each battle.

Instead of having X amount of uses per move, the Stamina bar is less forgiving and while it prevents spamming of singular moves, it does limit the variety of attacks if not managed carefully. Stamina, as with Health, can be restored by items the player finds, earns or purchases from stores and merchants. 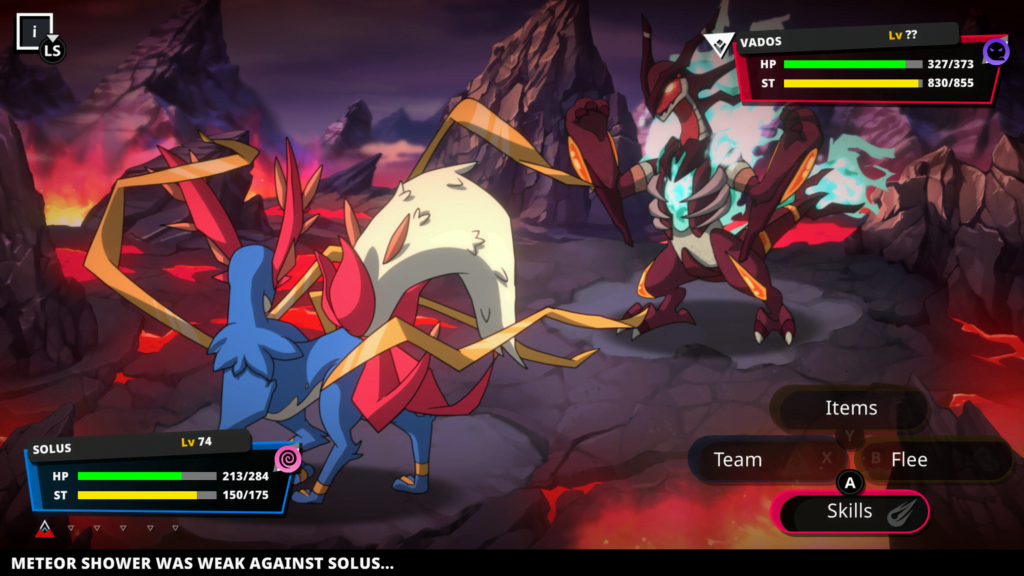 Attacks each have an assigned element, as do the Nexomon themselves. Understanding the strengths and weaknesses of these different elements is critical to efficient combat and success. Fire is strong against the Plant type for example but weak against Water types. Using the wrong attack can cause less damage than a type accurate attack. 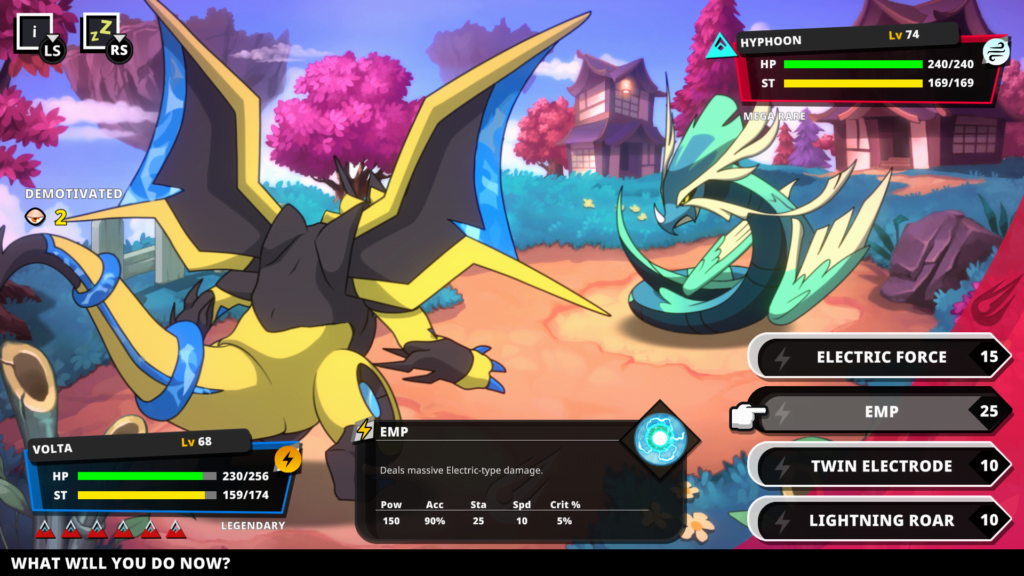 Cores exist in the context of equippable mods, with any one Nexomon able to have 4 equipped at any one time. These can be attack or defence increases, additional health boosts or increased rate of XP or money gained from battles. These can all be stacked, meaning you could have 4 of the same Core equipped to a single Nexomon.

Easily the two best are increases to XP or an XP share type Core that awards XP to a Nexomon even if it doesn’t participate in the battle. This exponentially increases the speed at which the player can level up their team while favouring only one or two. 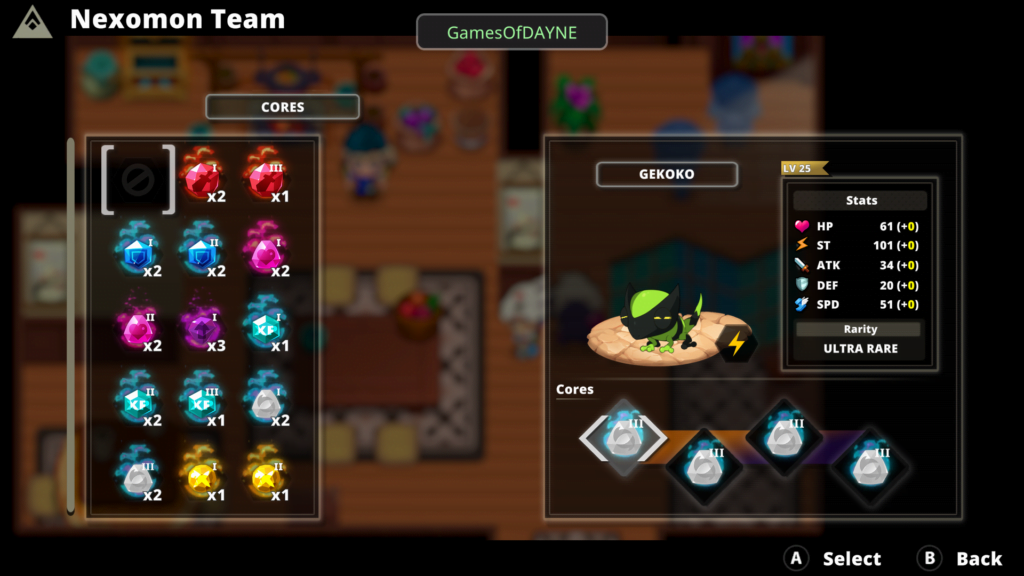 The combat itself is rather easy, very easy in fact even at the highest of levels. Aside from the final boss battle, I never once had my entire team wiped or even lose more than my two primary Nexomon. By paying attention to the different types, Nexomon: Extinction is a much easier combat experience than its rival Pokémon franchise.

The animations of the Nexomon and their attacks are cool and more dynamic than similar titles. The environments also feel more creative and varied as they stage these battles across a stunning variety of locales.

All about the triangles

The process of capturing a Nexomon is pleasantly creative. A combination of methods can be used to increase the possibility of catching a wild Nexomon. Weakening them through combat is the easiest solution but this can also work in conjunction with alternative features.

Food items can be found and purchased that may or may not appeal to any Nexomon the player wants to catch. Any food item will increase the odds of successful capture but if the Nexomon enjoys it, those odds increase even further.

Any ailments the wild Nexomon may also be suffering such as paralysis, burning or sleeping for example will also increase the players chances. Perhaps the most important aspect is which Nexotrap to use. 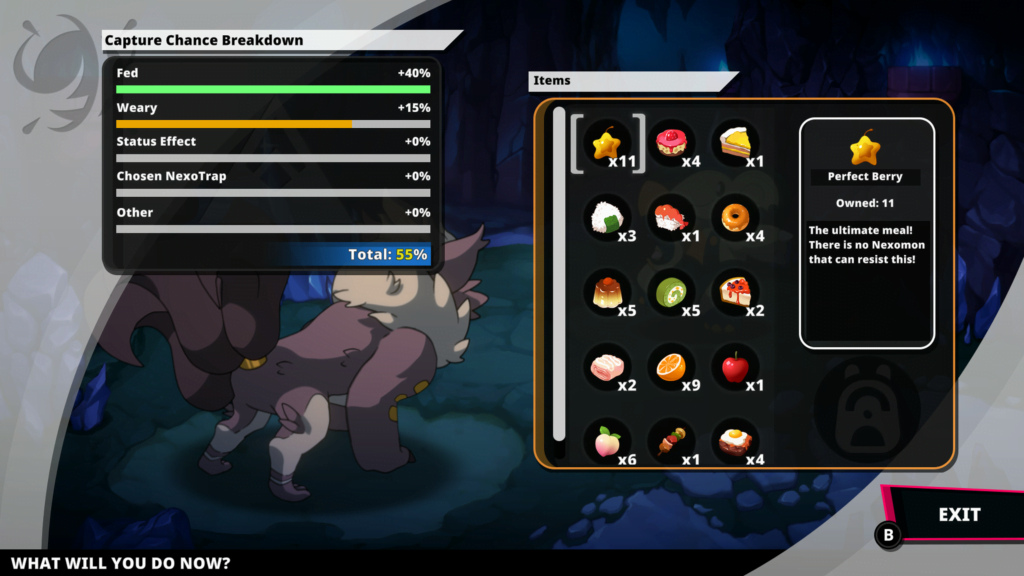 All of these factors are displayed on a stat screen when the player opts to attempt to catch or tame a Nexomon. The visualisation of the likelihood of success is an excellent feature that relies more on strategy than simply hoping for the best.

Once a Nexotrap has been thrown, the player has 6 seconds to enter a series of button prompts presented like a wheel. This is the final opportunity to improve the success rate of capture. When finally captured, the Nexomon can either be added to the players team of up to 6 or can be transferred to a storage box, accessible from any Healing Centre. 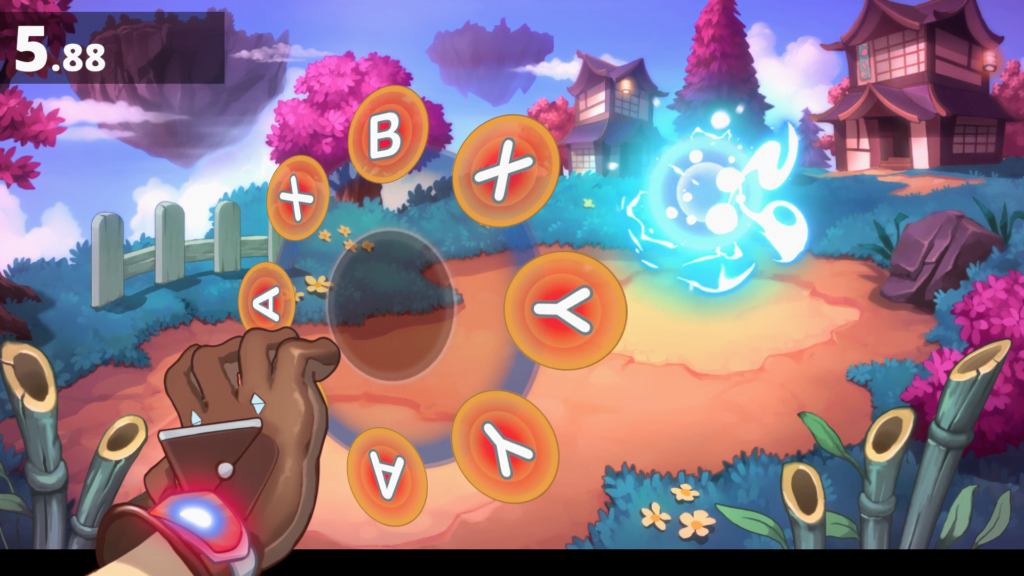 Currency in Nexomon: Extinction exists as money and elemental shards. Scattered throughout the world are boulders constraining elemental shards that can be smashed with a single button from the beginning of the story. These shards can be used to craft Cores and elemental Nexotraps or exchange for items or as pre-requisites for endgame quests. Just a tip, you might want to hold onto 25 of each shard when you hit the endgame. Trust me. It will be worth it.

Don’t just see it… experience it

The visuals are safe, not raising the bar for the genre but also not cutting corners. The explorable landscapes are gorgeous, the character design is excellent and the animations are fun. The bright and vibrant environments are a pleasure in every instance.

A playful charm is ever present both visually and through an excellent score that can raise tension and calm for the dramatic story beats. There are even scenes that play out with hauntingly beautiful melodies. Accompanied by joyful sound effects, the presentation fluctuates between competent and all consuming. The monster catching genre has been dominated for nearly 25 years by a singular franchise, eclipsing dozens upon dozens that have failed to escape the shadow of Pokémon’s powerhouse formula. Nexomon: Extinction however proves itself a legitimate contender. 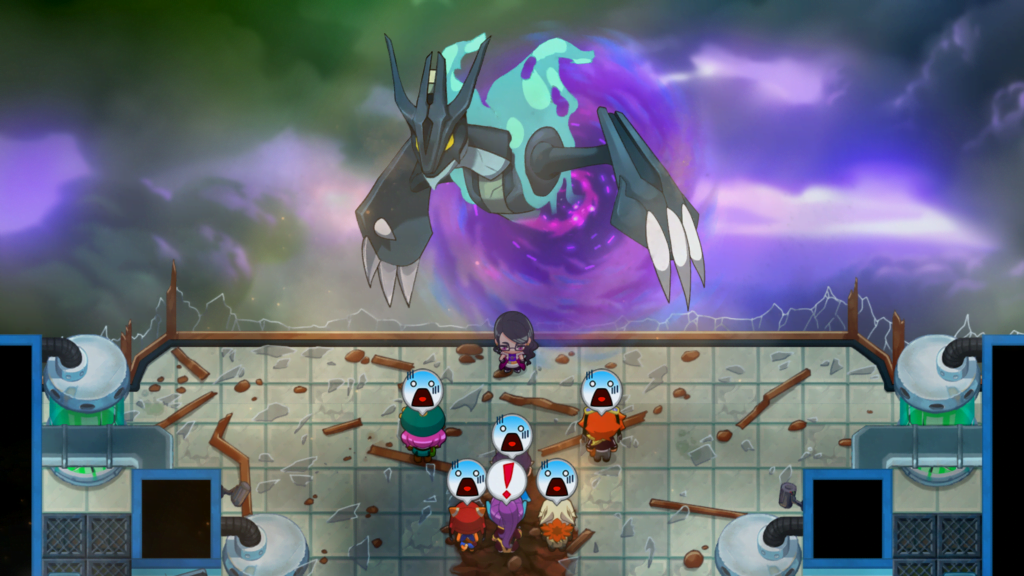 The heights the narrative reaches with its deep and thought out mythology exceeded my every expectation. An abundance of optional side quests, keys to vaults full of treasure and significant items to discover all contribute to a more rewarding, engaging and interactive experience with purpose.

Nexomon: Extinction might be the new kid on the block but it manages to leave a lasting impression long after the credits. At the time of this review I have put in over 50 hours and captured just over 300 of the Nexomon. An absolute joy to play, Nexomon: Extinction treads familiar territory unashamedly but doesn’t hesitate to veer off into its own world of wonder. The world and story told within it are so unique that I personally believe it to be the very best the genre has ever seen.

– Endgame is finite – not enough quests

– Combat is far too easy, even at the highest of levels