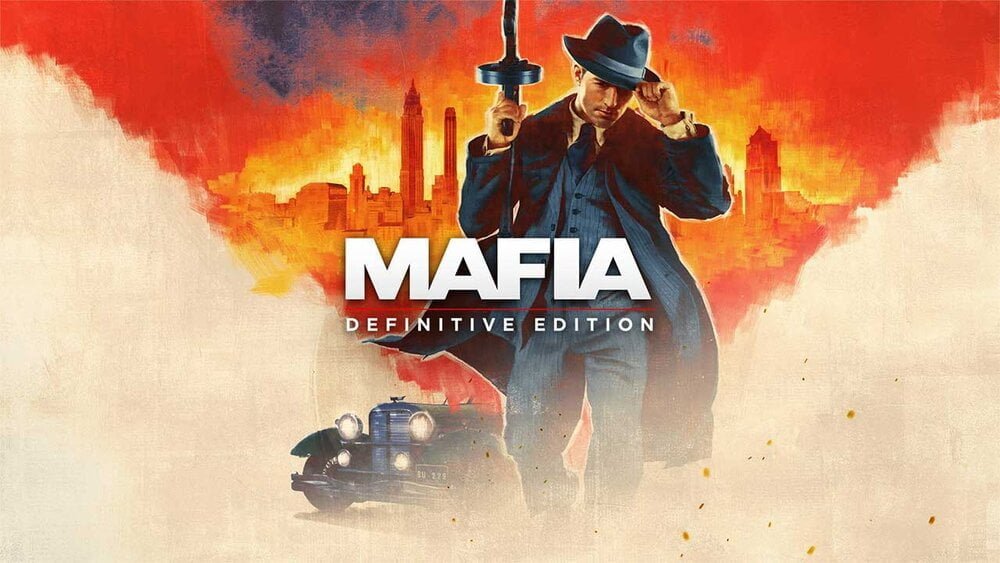 Remade from the ground up and released 18 years after the OG experience, Mafia: Definitive Edition takes a great game and makes it better!

Mobster stories are interesting on a number of fronts, excuse the pun. From the cunning and typically illegal business models such as racketeering, protection, and trafficking of weapons and narcotics to the reputations certain mobs achieve in their territories, the lives led by these criminals are wrought with danger at every turn.

A high risk, high reward lifestyle full of bullets, blood and corruption adapt perfectly into the video game medium, as demonstrated in 2002 when Mafia was first released. Nearly 20 years and two sequels later, the original gangster of gangster video games, Mafia, has returned, completely remade in the form of Mafia: Definitive Edition. With a fresh coat of paint and a brand new game engine, mechanics and various other technical improvements, this remake has a lot to live up to and a very loyal fan base to deliver this experience to.

Welcome to the Family

The player is introduced to Tommy Angelo in the opening cinematic as he meets with a detective in a quiet bar in 1938. In exchange for protection for his wife and daughter, Tommy opens up about his role in the Salieri family mob and how he, an honest cab driver, became one of the most notorious gangsters of the fictional Lost Heaven. 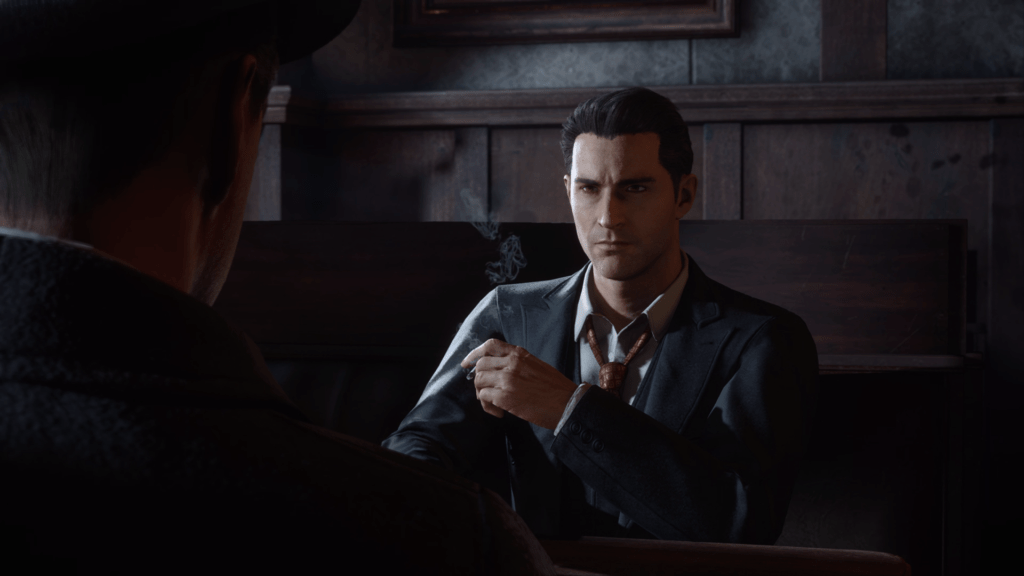 Players assume the role of Tommy throughout the entire single player experience. Beginning with Tommy’s first encounter with members of Salieri’s mob, the player is thrust into his shoes as a simple quest for revenge leads to a career change. Leaving behind cab driving in exchange for a blood money driven life as a respected member of the Salieri family.

Tommy’s ascension through the ranks to ultimately becoming one of the most trusted men in Don Salieri’s inner circle is interesting, engaging and full of twists and turns. His relationship with Sarah, daughter of one of Salieri’s oldest friends, plays a huge part in the overall narrative that drives his decisions at key moments. Sam and Paulie guide Tommy through the learning process of life in the mob and typically accompany him through a fairly linear story with a fun mission variety. 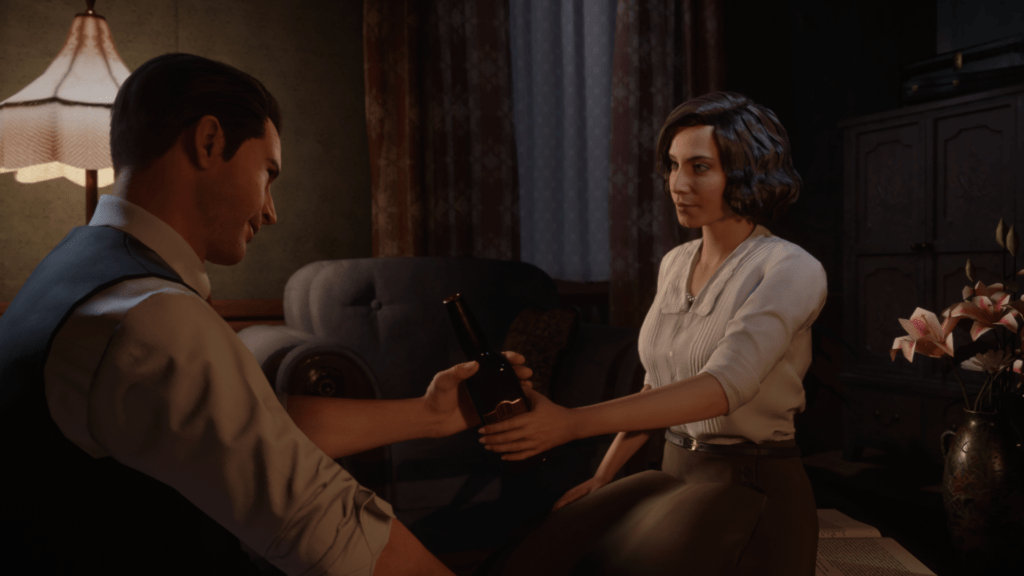 The story has more heart than may be expected, especially considering Tommy is essentially an anti-hero, a criminal embedded in a war between the Salieri and Morello families. Drama, action, thriller, the narrative crosses over into all territories resulting in an exhilarating story that managers to maintain its pace and intensity over its 8-10 hour duration.

The supporting characters are all pretty fleshed out and feel justified for their inclusion in the narrative. With the exception of one or two that seem to only exist to help Tommy and the gang with things they need for their missions, backstories and their roles in the family are explained competently. 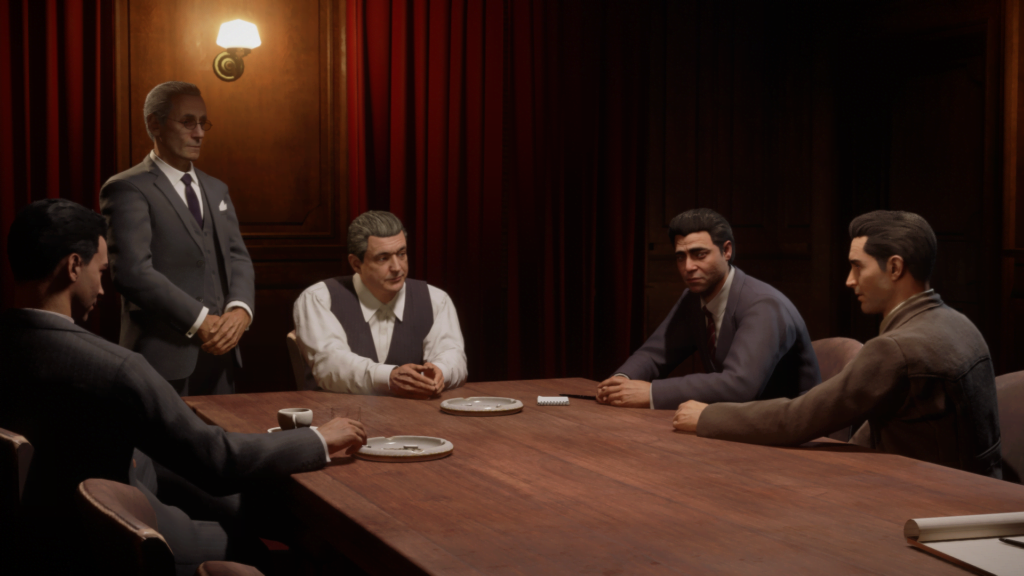 At the conclusion of the story, the world remains explorable via the “Free Ride” option in the main menu. This mode allows the player to fully explore the open-world but unfortunately, with the story out of the way, there’s little to do. There are dozens of collectibles to find in the form of magazines and cigarette cards, as well as cars to bring back to the garage to increase the variety of vehicles to explore the world. There are no sub-missions or optional quests to complete. This mode suffers as a result, likely only of interest to completionists looking to find everything despite no reward outside of Achievements/Trophies.

Considering the story as business, the gameplay is the pleasure. This third person action-adventure blends melee combat with gunplay, both of which are satisfying in their own regard. 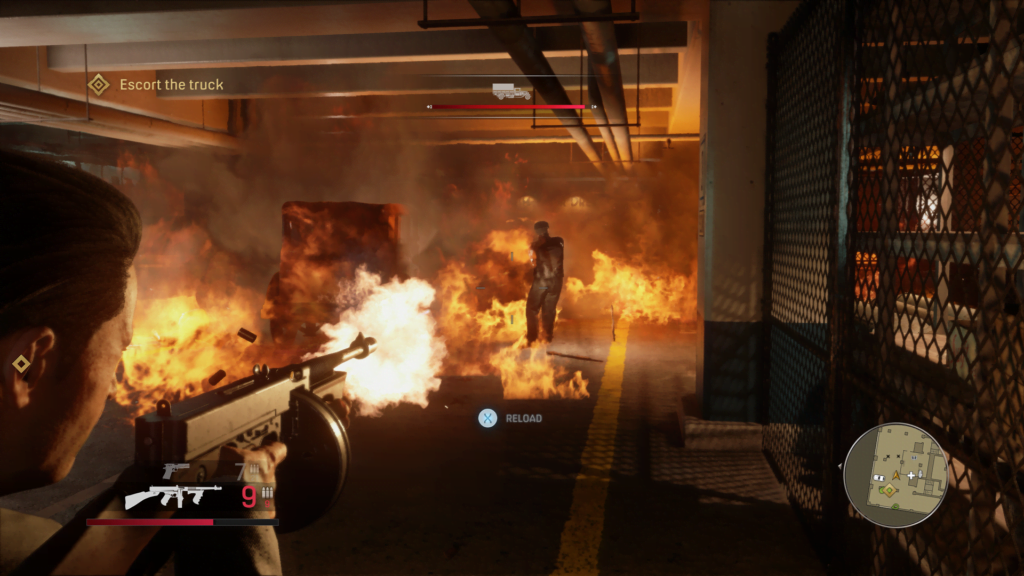 The gunplay is fun, allowing the player to carry up to two firearms at a time, switching with those dropped by slain enemies for variety. Variations of pistols, shotguns, rifles and machine guns make for fun experimentation and all handle and feel good. Ammunition can be picked up from enemies or in ammo boxes scattered throughout the missions, as can grenades and molotov cocktails. 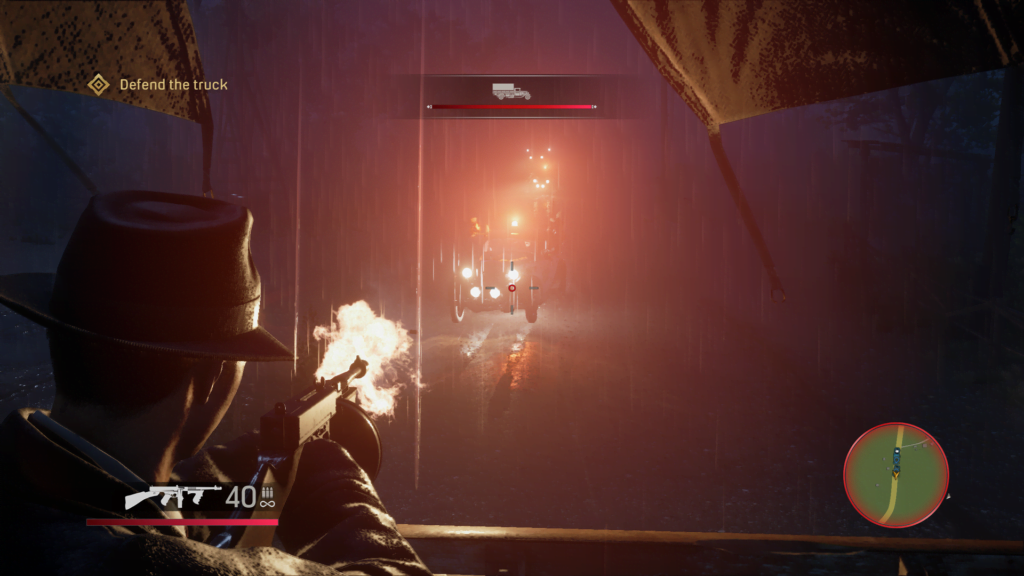 Throwing hands with an enemy when close enough is a quick way to dispose of a threat while reserving ammo. A single button is used for melee combat that throws punches and when thrown in succession, a takedown/execution plays out that varies based on which weapon is equipped at the time. Melee weapons such as a baseball bat or knives can also be found and used which also have their own takedowns. 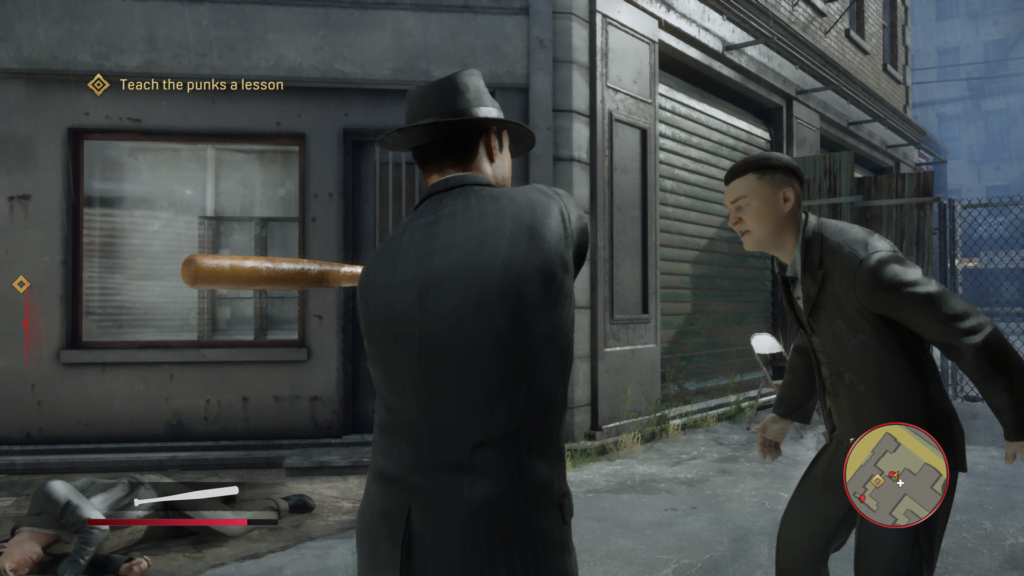 In combat encounters, the player is able to utilise sprint and crouch to reach and hide behind cover. Some surfaces such as barricades, low fences and crates can also be vaulted over. The overall gameplay is fun and simple enough, providing the option of running and gunning while also affording the player to take a more tactical cover-based approach.

Considering Tommy was a cab driver at the start of the game, it’s a little disappointing that the driving doesn’t feel better throughout the story. Luckily, driving doesn’t contribute to the bulk of the gameplay experience and the option to skip the drive from the A to B type objectives is even more applaudable.

It’s the 1930’s, there’s no supercars or sports cars and the driving reflects that with how the cars and motorcycles available handle. Everything feels heavier, slower and turning is a nightmare. Each car has different stats but none handle particularly well whether at speed or not. 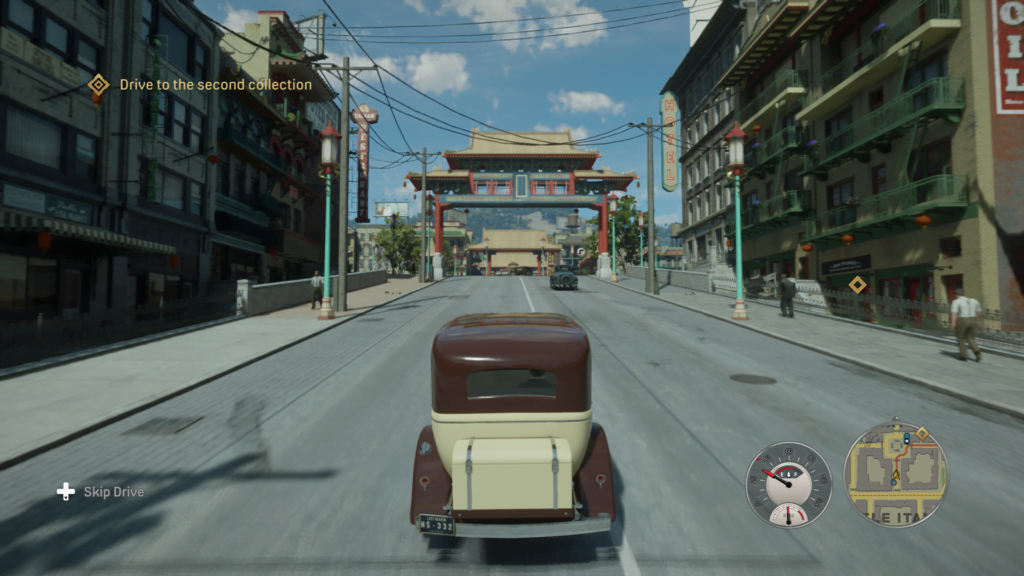 From the overall gameplay perspective, driving is the weakest link but as mentioned, this is not a significant portion of the core gameplay throughout the story and the ability to skip the drive between objectives feels all the more welcoming.

Erratic driving and unnecessary violence against the public will attract the police. Speeding, crashing into things and gunning down the masses are frowned upon and depending on the extent of the carnage and the targets, the police will pursue the player. Utilising a 5 star wanted style system, the more stars the player has the harder the police will hit. 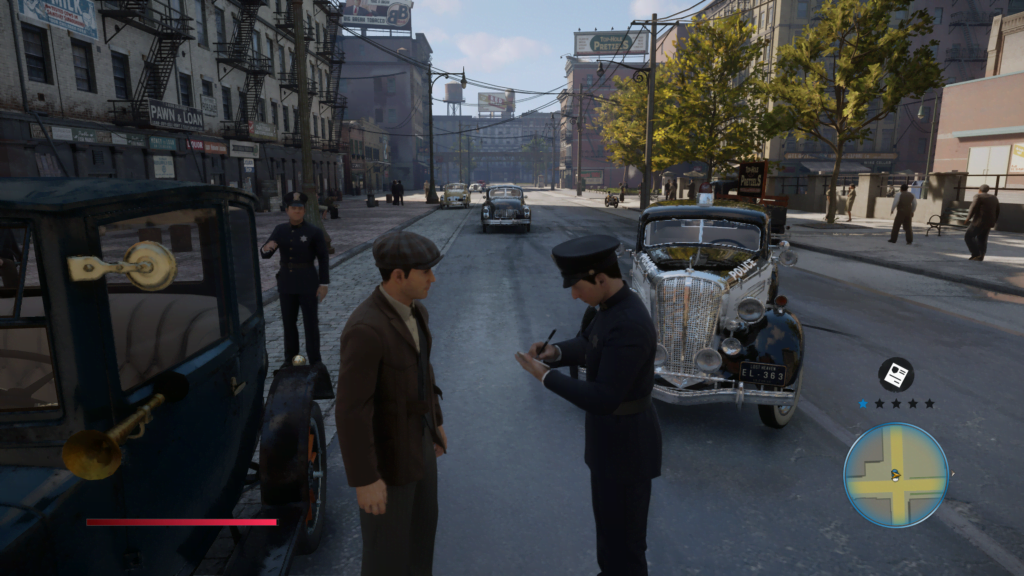 A one star crime spree will result in Tommy receiving a fine while a two star crime spree will have the police attempt to arrest Tommy if they catch him on foot or rip him from his vehicle. The player can co-operate with the arrest by doing nothing, letting the law enforcement officers handcuff and arrest him. There is a fun alternative though and that is to press a button when prompted to break the handcuff attempt and in turn cause the officers to shoot while the player makes a break for it.

By changing certain settings to simulation in the menu, the player is able to toggle whether or not speeding and running red lights for example will trigger a police presence. The alternative option will only draw police when crimes of violence have been committed. It’s fun to have a choice and to treat the in-game road as we would in real life.

The visuals in Mafia: Definitive Edition are stunning. The facial animations, water and lighting in particular are excellent. All of the character models move more authentically and feel more alive than other titles that lend to a more genuine experience. The reflections in puddles and the splashing of water when walked or driven through are such subtle details that add so much to the authenticity of the world. 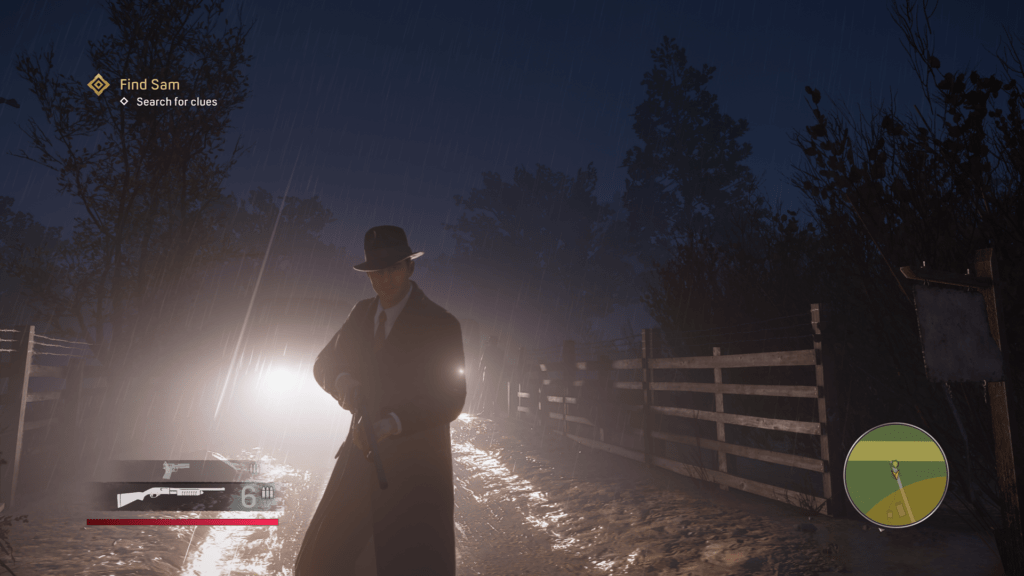 The sound design is solid with sharp sound effects and an excellently appropriate 1930’s score compliment the visual presentation. Hand in hand, the audio/visual experience of Mafia: Definitive Edition is beautiful. 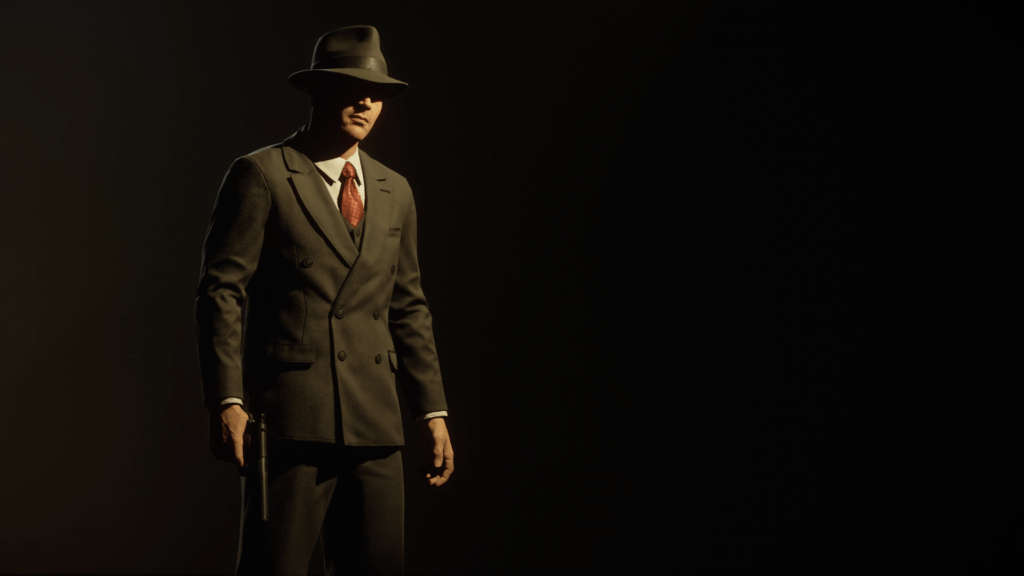 Is it worth joining the Salieri Family?

Mafia: Definitive Edition is an excellent remake of a classic title. Nearly 20 years and this series has never been more relevant. With Mafia II and Mafia III receiving the remaster treatment and Mafia: Definitive Edition being a complete remake, all 3 titles are available individually or as a part of the Mafia Trilogy collection. If the quality of this title is anything to go by, there is definitely room for more instalments in the Mafia franchise.