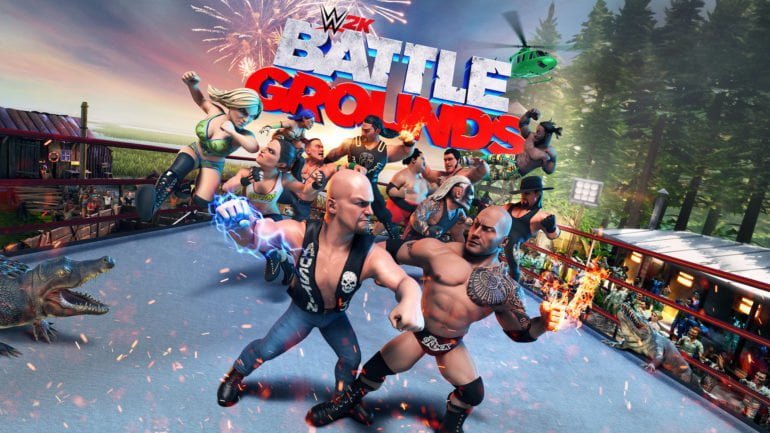 Rumble in the jungle… and swamp… and everywhere else you can think of! WWE 2K Battlegrounds shakes things up!

Similar to 2011’s WWE All Stars, WWE 2K Battlegrounds brings it’s superstars together for some outlandish and over the top arcade style brawling. Replacing the more in-depth combat system present in 2K’s near-decade run of WWE titles with a simplified arcade concept certainly doesn’t compromise the fun to be had. The ridiculousness of the moves, locations and cartoonish art style of the extensive roster of Superstars comes together for a fun, wacky and entertaining brawler.

The WWE Superstars have been brought to life with a wild and cartoonish flavour, appearing almost as caricatures of themselves in a playful and endearing fashion. Each sits within a class that has its own strengths and weaknesses. The Powerhouse class for example is a little slower but their attacks hit with more impact while an High Flyer is faster but hits with less impact. Understanding the advantages and disadvantages of the players selected Superstar as well as that of their opponent will help players be more efficient with their play style. 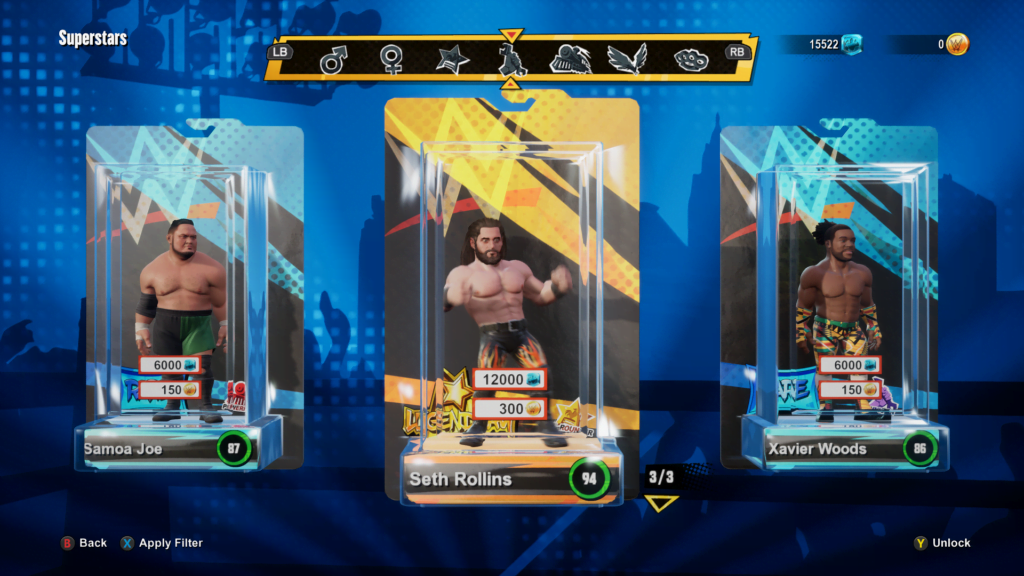 Boasting a roster of over 70 current and Legend WWE Superstars to be unlocked, with over 60 more to come post-launch, players can select wrestlers from essentially every era to compete with. Hulk Hogan, The Rock, Roman Reigns, Randy Orton, Shawn Michaels, Jeff Hardy, Finn Balor, Bray Wyatt… you name them, they’re here! Though, majority of the Superstars have to be unlocked by spending either in-game currency or micro-transaction currency. They vary in price according to their rarity, ranging from common up to legendary but every single one of them can be unlocked with the in-game currency, none are locked behind an actual paywall which is a relief. Each superstar also has 2 alternate attires to unlock. Continuing the fun of the presentation, each Superstar and their alternate attires are inside what looks like a figurine case, pounding at the plastic packaging to be set free. When purchased, they kick through the plastic and are ready to be used.

Packed with a bunch of modes that can be played solo vs the CPU or with friends either locally or online, a Campaign mode is present that contains an original story featuring 7 budding Superstars created exclusively for WWE 2K Battlegrounds. The premise sees Paul Heyman enlist the aid of WWE Hall of Famer “Stone Cold” Steve Austin to find new talent. 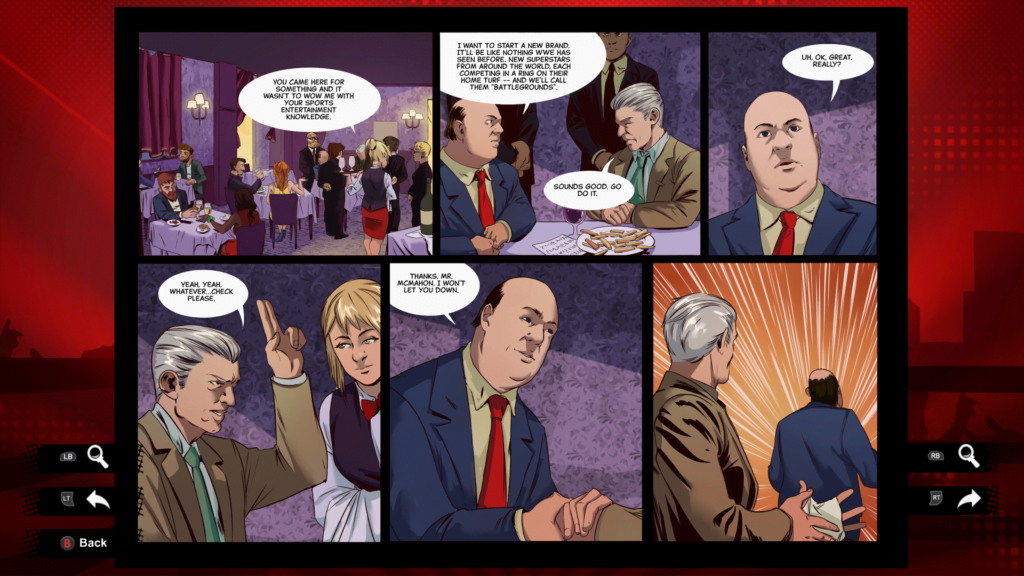 The story is told through comic book illustrations which fits perfectly well with the overall approach of the in-game animation and quirky action. Each potential Superstar discovered has a set of compulsory and optional matches to complete against WWE Superstars and Legends to push the story forward. Rewards for these matches include new Power-ups, cosmetic items, Superstars and Arenas. Each of the 7 original Superstars have unique gimmicks/personas and move sets. While some players may be initially upset to not be able to play as actual WWE Superstars, these characters are fun and diverse enough to remain engaging throughout the approximately 6-8 hour story. This playtime can easily blow out by the wealth of optional matches to complete with additional rewards to earn.

Stepping into the squared circle

Before we get to the other modes, we need to talk about the gameplay. Unlike 2K’s previous instalments with their WWE 2K series, the gameplay has been built from the ground up by Saber Interactive for a more accessible arcade type experience. Each strike and grapple move is ridiculously over the top and it works. Uppercuts that launch opponents high into the air or grapples that see both Superstars take to the skies before crashing to the mat with comic-like impact is fun and unique. 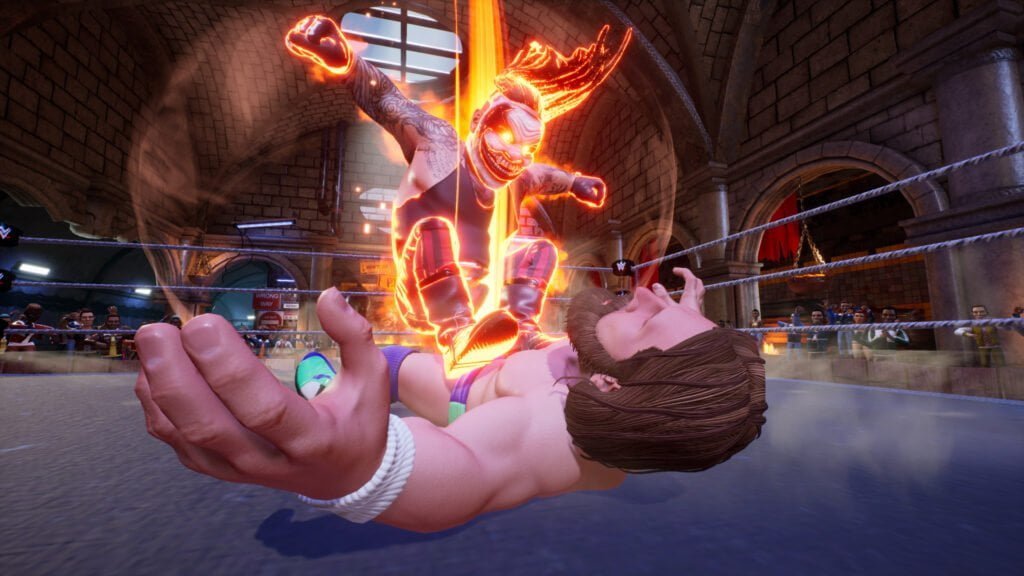 Each Superstar has a health, stamina and power-up bar, as well as a Heat Bar beneath the character. Attacking the opponent in any fashion be it with Melee strikes, grapple moves or weapons and other environmental advantages inflicts damage and reduces the health bar. When the health bar turns red, the Superstar is more at risk of succumbing to a pin-fall or submission as the button mashing mini-game associated with each becomes more difficult to escape.

Stamina is consumed by signature attacks and finishing moves as well as countering moves from the opponent. It refills gradually over time but needs to be used conservatively to ensure there’s enough in the tank to counter an opponents move. 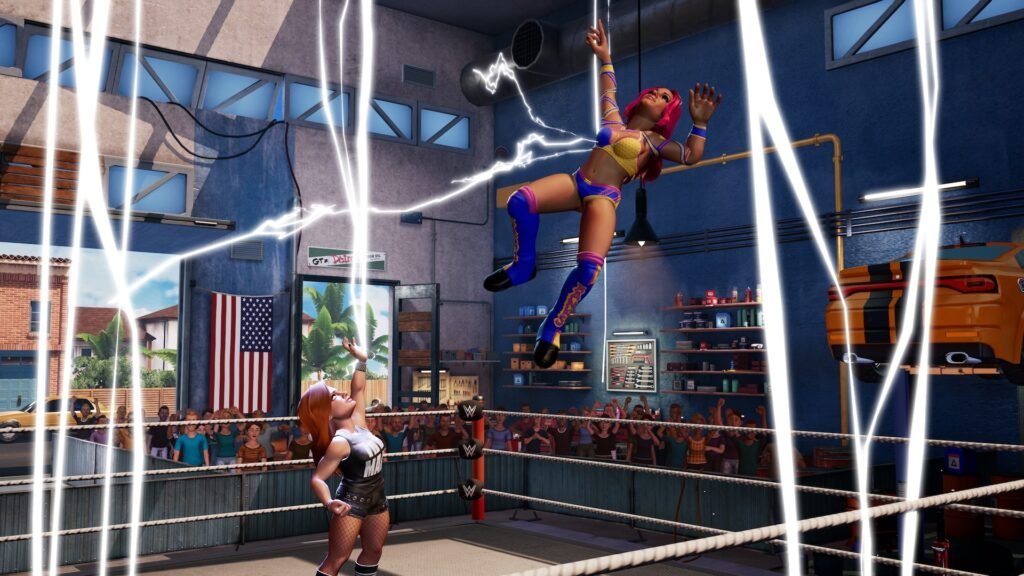 The Power-up feature is easily the most fun and interesting additions to the gameplay mechanics. Each Superstar can si as health regeneration or absorbing all nearby opponents Heat Bar and finally Tier 3 has abilities like unblockable damage or summoning thunder. There are several to unlock and all are fun to experiment with and offer even greater variety within each match. Power-ups can also be upgraded to be more powerful by spending Bucks which are earned by completing matches. The Power-ups are not single use as the bar will continue to replenish throughout the entire match.

The Heat Bar is filled by inflicting as well as receiving damage. When it is full, the player is able to activate their Superstar’s finishing move, dealing incredible damage in a manner as wild and wacky as possible. Taking the actual finishing moves used by the WWE Superstars and accentuating their impact and style is incredibly fun to see for WWE fans in particular.

Anything can happen in WWE!

The environment can be as much of a weapon as a steel chair or kendo stick found from under the ring. Fighting in the swamp arena has alligators leaning over the barricade at ringside to chomp on nearby Superstars or to catch those unlucky enough to be thrown into them. Have you ever wanted to use a remote control to control a goat to chase down and head-butt your opponent? WWE 2K Battlegrounds have got what you need. It’s these outlandish moments that shine amidst the already enjoyable arcade style combat, reminding players that just like the actual WWE product itself, anything can happen at a WWE event. 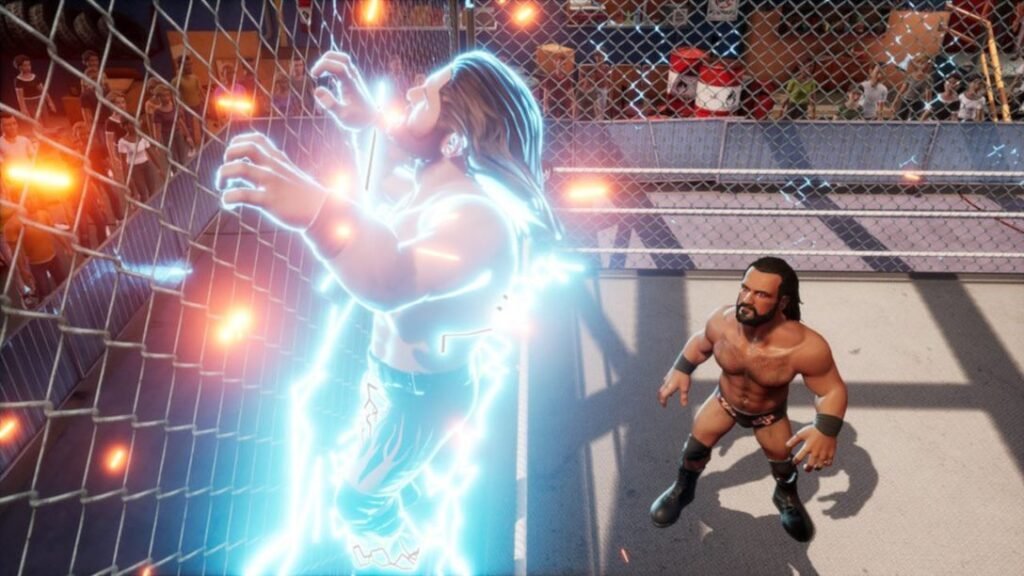 As for weapons, I was certainly not expecting to see a motorcycle used to beat my opponents down but I was pleasantly surprised to see it unfold. Traditional weapons such as steel chairs, guitars and kendo sticks are also present as well as an assortment of other unexpected objects that are all fun to utilise.

For all the things present that aren’t expected, one thing I personally didn’t expect was an invisible referee. Instead of a physical ref, the counts of a pin-fall and count-outs when outside the ring are represented by a number on the screen and vocalised. It may be a minor nitpick but having a visible referee would have gone a long way in adding to the immersion of the experience and by no means ruins it, instead it leaves it feeling just a touch incomplete.

Outside of the Campaign, there are separate Men and Women Exhibition modes featuring classic match types such as singles, triple threats and fatal four ways, Royal Rumble, Gauntlet, tag team and the most electrifying Steel Cage match to ever grace a WWE video game in both single and tag team variations. These can be played alone against the CPU or with up to three other players either locally or online. King of the Battleground mode makes up to 4 players survive a gauntlet as long as possible. Once a Superstar has been eliminated by being forced from the ring, another will enter. Various scores and stats are recorded for the online leaderboards. This mode supports optional cross-play with other platforms.

Battleground Challenge requires a custom character to be created and used. This is presented similar to a battle pass but requires no cost to play. There is an extensive tree full of challenges that offers rewards upon completion. Playing this mode will allow for the created characters attributes to be upgraded via an impressive skill tree that covers Offense, Defence and Charisma.

Tournament mode is an online variant putting players against each other players in a 7 match competition. Men’s, Women’s and Steel Cage Tournaments are present as well as one that is “coming soon”. Some Tournaments require an entry fee of 1,000 Bucks, the in-game currency earned by participating in any match type or mode or 25 Golden Bucks, the micro-transaction currency of WWE 2K Battlegrounds.

Character and Battleground creation are present, allowing players the opportunity to create their very own Superstars with a fun and varied assortment of cosmetics. Additional cosmetics can be unlocked or purchased with premium currency to create some pretty fun Superstars. 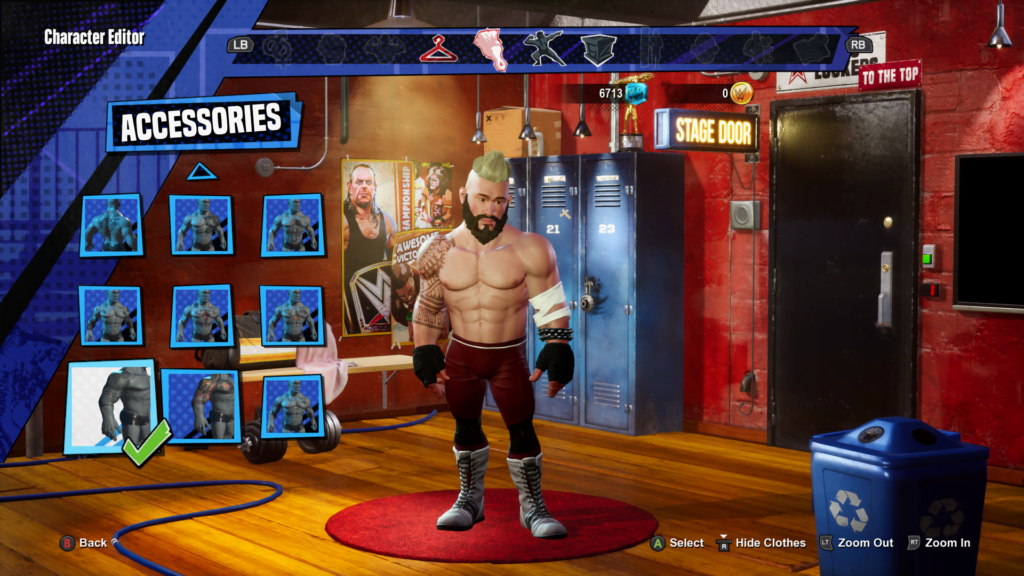 The Battleground Creator suite lets players choose all aspects of the venue, from the ring design, exterior, entrance ramp and lighting, crowd appearance, what weapons are under the ring and much more. There are several of each to choose from and many more that can be unlocked with either Bucks or the premium Golden Bucks currency. 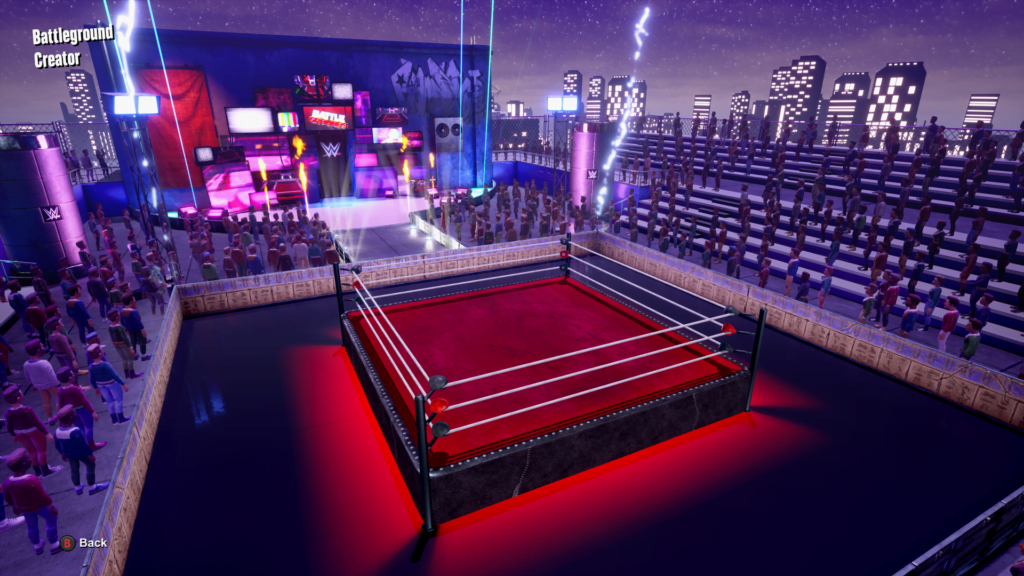 There’s a daily challenge system that refreshes each of the three challenges that have been completed. These regard the player with Bucks and contribute towards a leveling bar, similar to a battle pass that awards Bucks at regular intervals and a cosmetic item at the 20th and final level.

Complimenting the play by play commentary from WWE Hall of Famer Jerry “The King” Lawler and fan-favourite Mauro Renallo throughout each match is a pretty kickass soundtrack, adding an additional sense of pace to each match. The fast paced gameplay accompanied by a fast paced soundtrack adds to the energy and atmosphere of these Battleground brawls. Commentary repetition does bring the matches down slighty.

The cartoonish art design absolutely works and removes the seriousness of more photo-realistic visuals in exchange for a lighter, more comical tone that suits the nature of the gameplay mechanics and experience overall.

WWE 2K Battlegrounds pulls no punches when it comes to presenting an alternative to the typical WWE video games we’ve grown accustomed to. It’s out there, it’s over the top, it’s downright unbelievable but in the best of ways. In comparison, this is what WWE’s live product has always been about. Entertaining it’s fan base by giving them something though don’t expect, for better or worse. 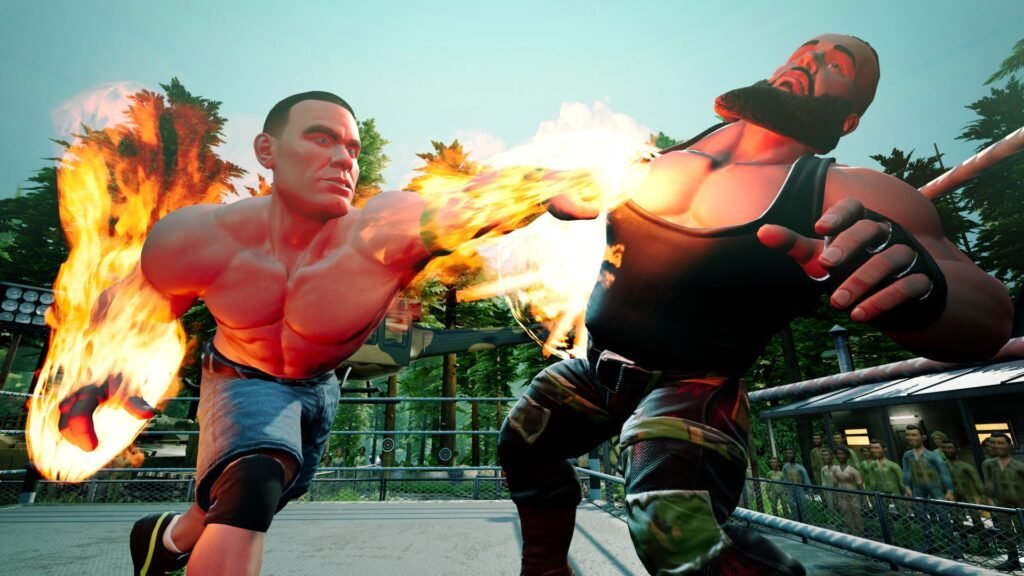 In the case of WWE 2K Battlegrounds, the shakeup to the formula is much needed and culminates in an incredibly fun and dynamic arcade brawling experience that is engaging. With plenty of modes, challenges to complete and Superstars, Power-ups and cosmetics to unlock there is plenty to keep players returning for more, especially when new content arrives post-launch.

+ Over the top action

+ The Power-ups are awesome