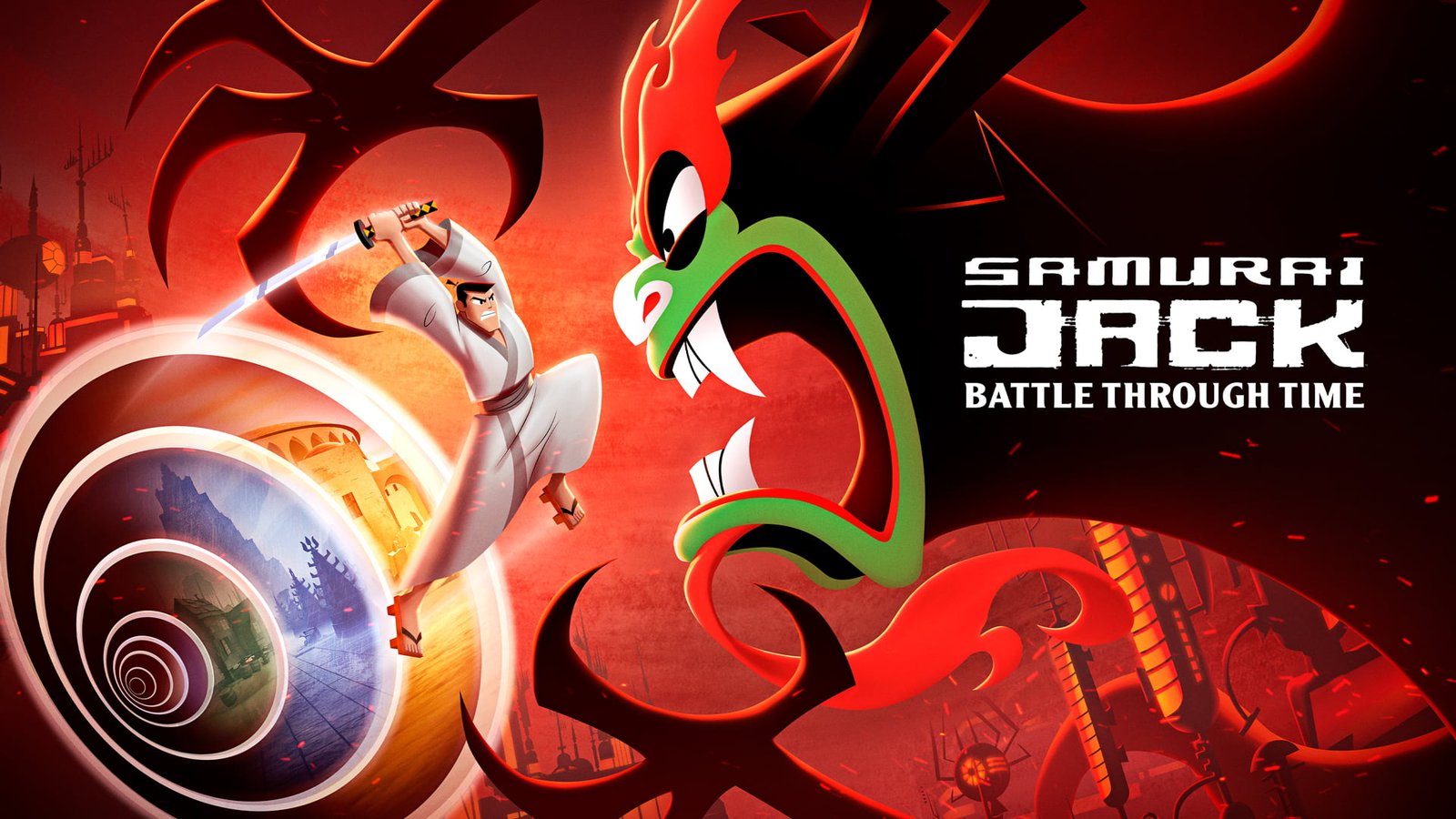 A faithful adaptation of a beloved franchise into a fun and engaging action platformer that will please fans and newcomers alike.

Marking only the third video game entry in Samurai Jack’s long history after two pretty average at best outings, this one has been a long time coming. Fans of the animated series may recall series protagonist Jack and his evil nemesis’ Aku’s daughter Ashi jumping through a portal in the final episode of the classic cartoon. What occurs in this portal was not revealed until now in this untold adventure. It’s a pretty cool premise for fans, getting to see a brand new adventure unfold that makes sense in the context of the series finale. As this adventure is considered canon, the moments that preceded the epic finale are available to experience in Samurai Jack: Battle Through Time.

Featuring the original voice cast to help bring this brand new tale to life, Samurai Jack fans will likely be wary of any hype towards developer Soleil’s take on this fan favourite. The 3D action platformer brilliantly brings Jack into the players hands with a faithful playable representation of everyone’s favourite animated samurai and his magic katana. Hacking and slashing with said katana is not the only way players are able to defeat the wave based enemies. Packing in clubs, bamboo poles and other swords to name a few, players can customise their loadout how they see fit with four slots in the menu, switching between them on the fly using the D-Pad in the heat of battle. A bow and arrow, throwing knives and stars and even guns give you an idea of the ranged weapon variety. Kiai fire orbs can be collected from the environment or fallen foes and contribute to a flaming icon above the players health bar. When full, the player is able to activate it and unleash a devastating attack that differs based on the weapon currently being wielded. Experimentation with this diverse arsenal of weapons and abilities is fun as the melee weapons have their own combos that can be unlocked via a fairly extensive skill tree. 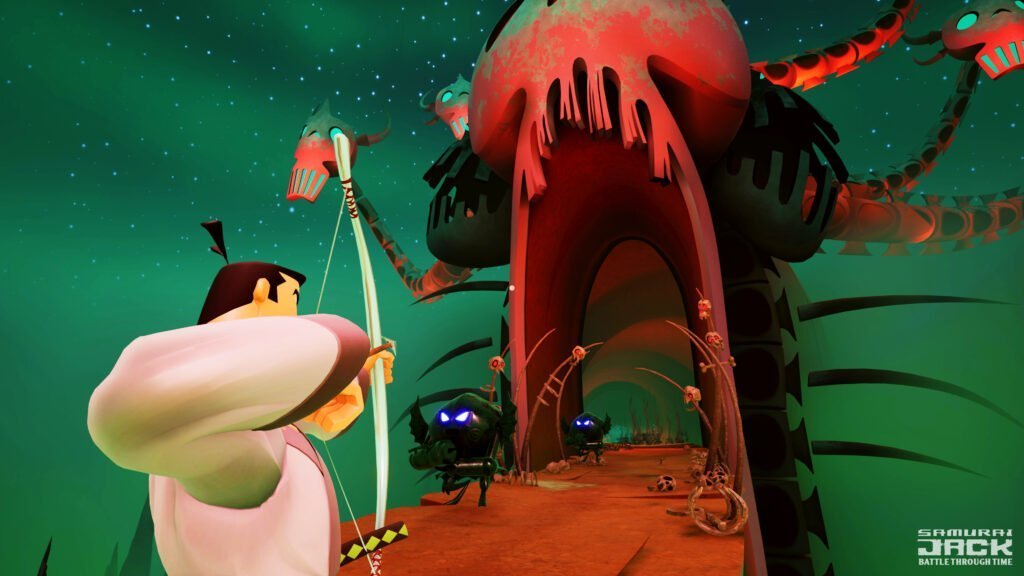 Skills can be unlocked at any time by accessing the skills section of the menu screen. Skills are unlocked by spending Skill Points, Bushido Spirit Points and various rare stones such as diamonds and rubies, earned by defeating enemies or found within the environment. Combat, Physical and Spiritual trees each have a large number of unlockable skills that increase damage dealt, reduce incoming damage, teach double jump, increase enemy reward drop rates and so much more. A healthy balance of skills from each of the three categories is recommended for a more balanced experience. 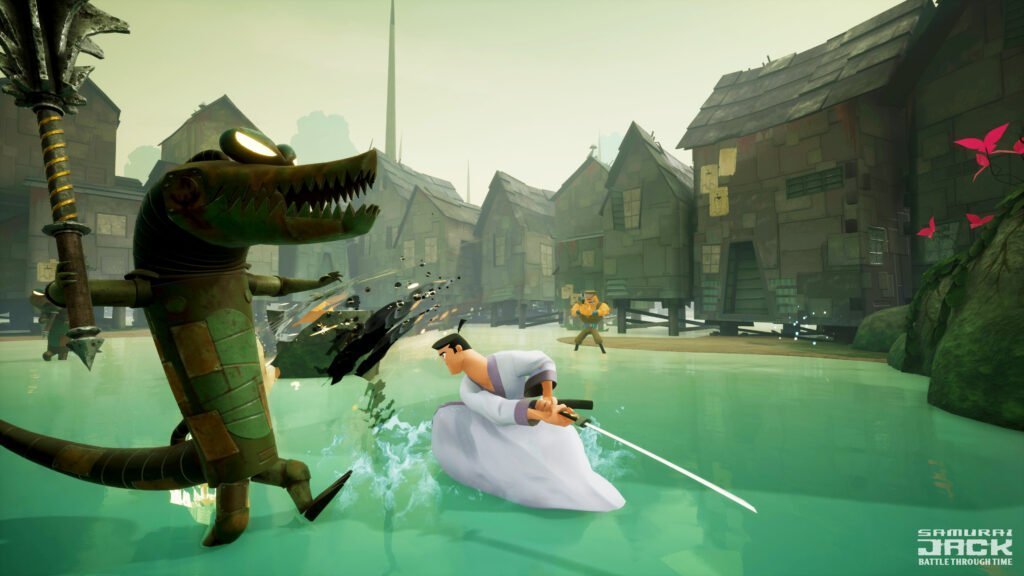 The platforming aspect of this title simply consists of jumping between platforms, utilising dash and dive rolls to avoid environmental hazards such as spikes and fireballs for example. Accessible enough to allow the focus to primarily be on the combat rather than the players patience and precision typically required in a platforming title. Oddly, climbing ladders or scale-able surfaces is really slow with Jack taking each rung at a time. While jumping can be done to reach greater heights at a time, it slows the momentum and pacing of the platforming. 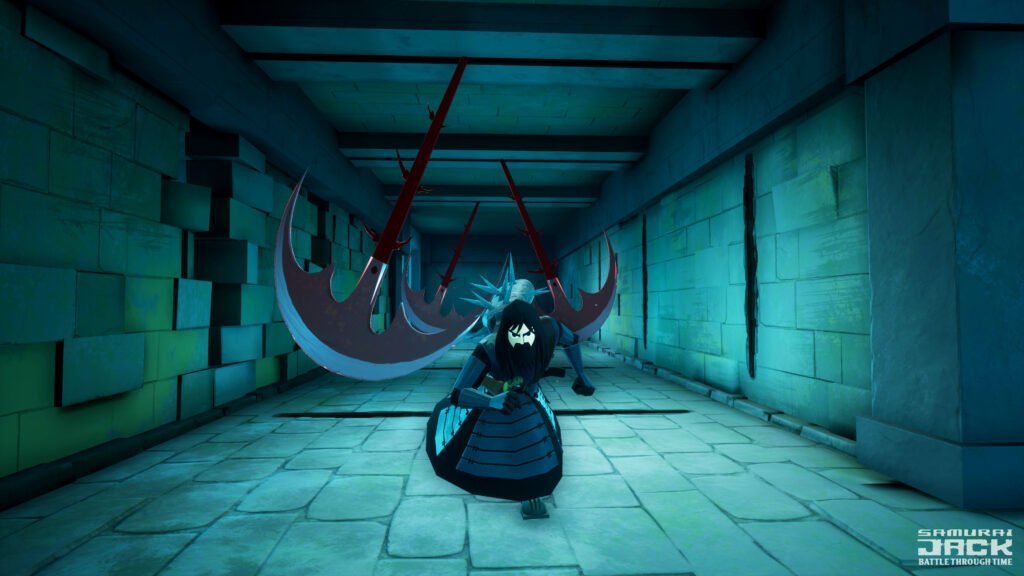 The enemy variety is fun, offering a decent number of unique and interesting enemy types that vary in melee and ranged combat. Enemies attack the player in groups, typically in wave based scenarios that prevent progression until all have been slain. Playing as Jack with such a fun arsenal of weapons and attack combos keeps these encounters fun and manageable without being too difficult. Playing on the hardest Master of Masters difficulty, which is only unlocked after the game has been beaten, offers a true challenge and enemies are a lot more relentless and health pick ups are few and far between. During combat, damage taken by Jack is visually represented by his gi (robe) ripping and eventually his hair falls loose, covering his shoulders in rugged, war torn glory. Healing restores his appearance to default but it is cool to see damage alter his visual aesthetic. Samurai Jack: Battle Through Time would not be complete without some larger than life boss enemies as seen in the animated series. These battles are engaging and offer enough of a challenge to keep players on their toes. 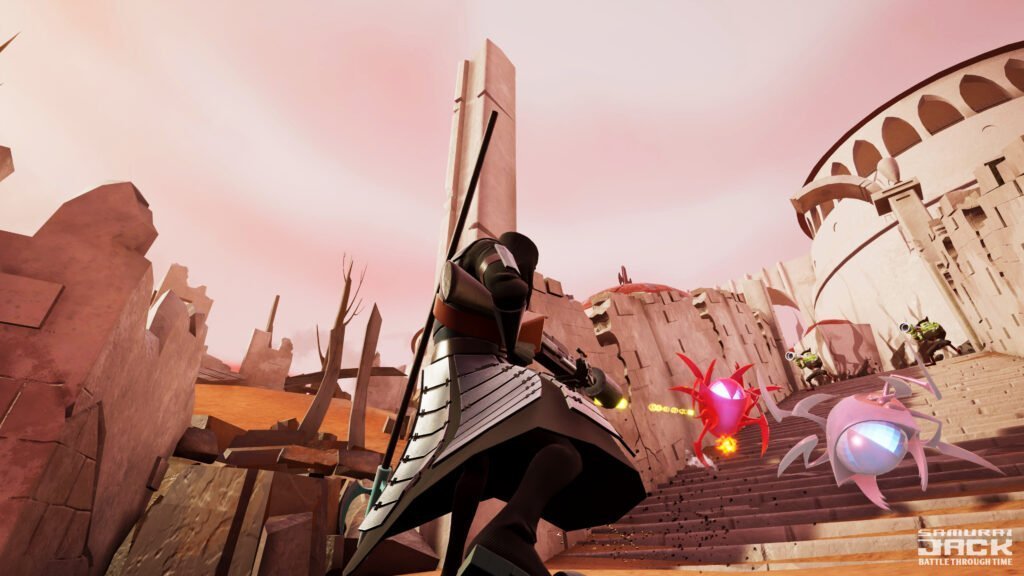 Populating the array of playable locations across the 9 missions are an assortment of characters from the animated series. Without being familiar to the source material, newcomers may not appreciate the randomness of their appearances or their relationships with Jack but remain interesting nonetheless. Interactions with these characters typically award Jack with random items to use on his adventure such as healing items, weapons, ammo or currency for instance. 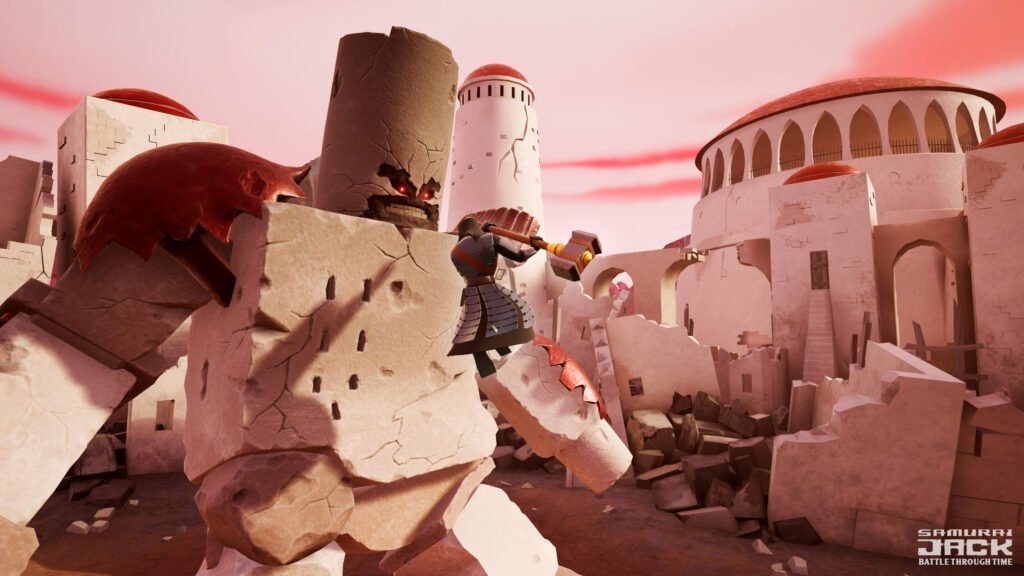 The simple yet stylish art design works, presenting Samurai Jack’s adventure in an accurate 3D realisation of the 2D series. Lack of overall detail in the character models is not a negative as this direction is consistent with the simplistic source material. Environmental designs are cool including locales such as serene mountains, a creepy graveyard, lava filled caverns and a dystopian metropolis for example. The sound design is fun, feeling epic, ominous and upbeat at all the right times, in all the right places and the sound effects feel authentic to show, adding to the immersion of the Samurai Jack experience. The overall presentation is stylistically consistent to the excellent animated series while also establishing itself as worthy companion content. By making the story canonically relevant and utilising a surprising story beat from the series finale to trigger it, fans of the series have a lot to love while newcomers may simply just see Samurai Jack: Battle Through Time as a fun action platformer with references and characters that don’t seem to have much context. The nostalgic feel to the gameplay in unison with the faithful adaptation of the source material come together in a well rounded action platformer that compliments the series finale of the animated show in satisfying fashion.

– Not a whole lot to do between encounters

– Climbing is far too slow