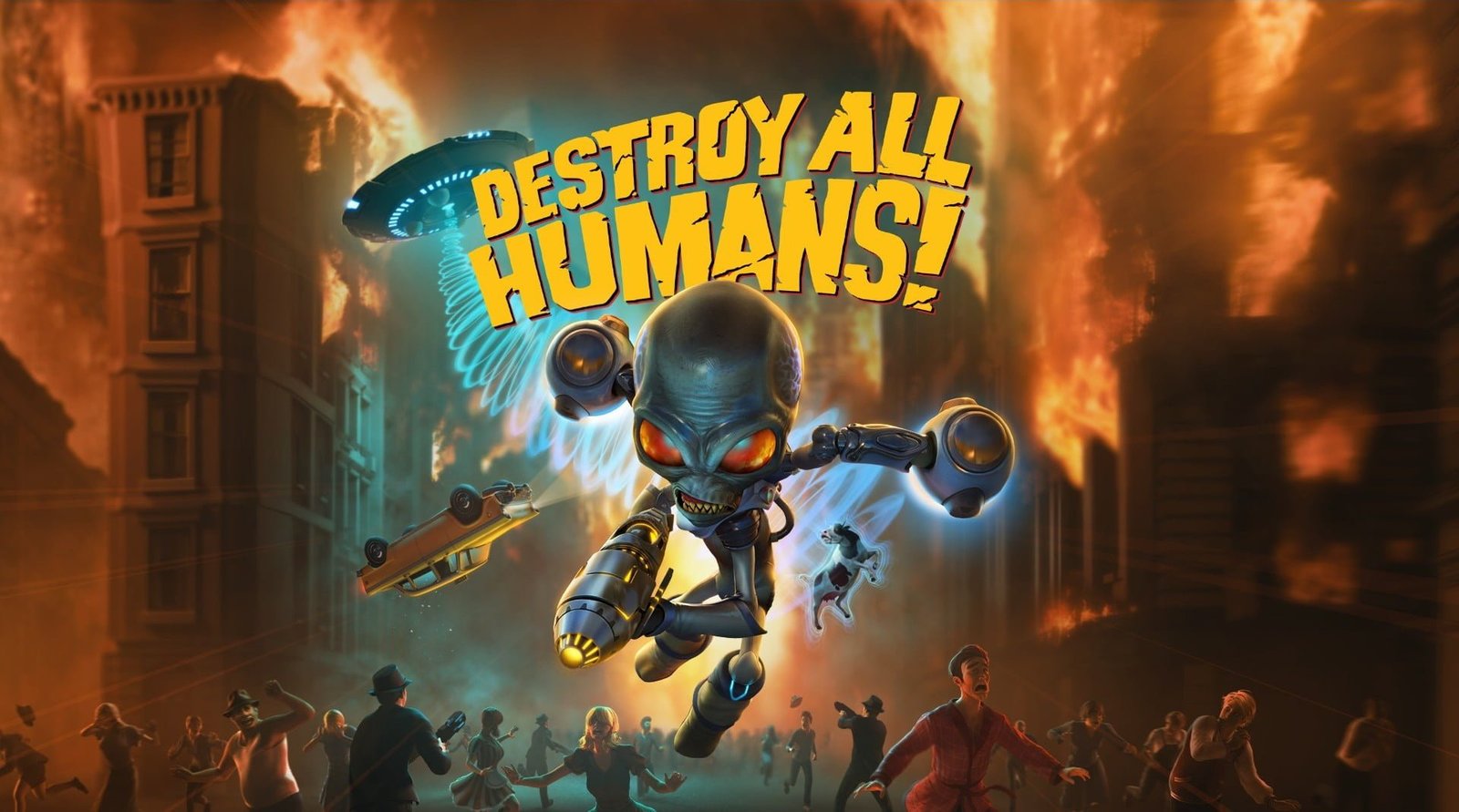 It’s hard to believe that it has been 15 long years since the original Destroy All Humans! first graced our PlayStation 2 and original Xbox consoles. This 2020 instalment blurs the lines between remake and remaster but delivers Furon clone Crypto 137’s first adventure in all of his over the top glory. By putting the player in the shoes of an alien with an arsenal of high tech weaponry and flying saucer, it has never been more fun to destroy all humans!

This third person action-adventure takes place in 1950’s America and events kick off with player character Crypto being sent to find out what happened to his fellow clone Crypto-136 after he crash landed on Earth. Having to protect his alien identity from not just the public, Crypto must deal with the military and a secret organisation knows as Majestic, similar to what we know as the Men in Black. The premise is kind of silly and so too is the gameplay but that’s what makes Destroy All Humans! so much fun to play if the player is looking for a casual experience that definitely does not take itself too seriously. 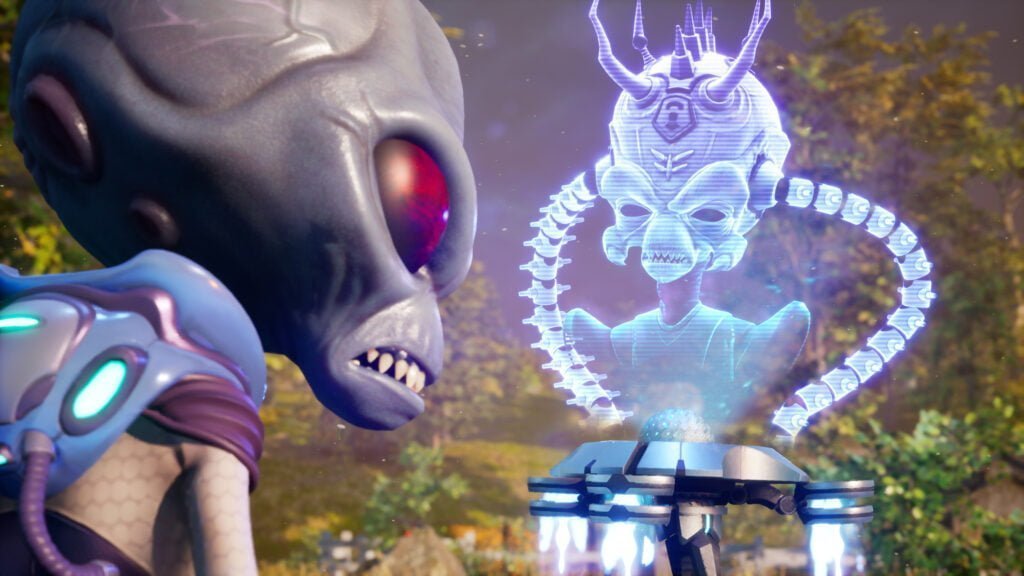 Crypto has an array of abilities at his his disposal, such as the Cortex Scan, which is needed to read civilians minds for humorous dialogues or clues to progress one of the 22 missions. Command, that can be used in specific scenarios to implant an idea in an unsuspecting humans mind to lead Crypto towards an objective. Telekinesis used to lift and throw humans and objects. And the ability to explode peoples brains, which grants DNA to spend on upgrades for Crypto or his saucer in between missions. These are only a few of the ways the player can inflict mayhem upon the “monkey” humans as he calls them. His weaponry is just as diverse and fun to experiment with, including the Zap-O-Matic laser that zaps enemies and can explode objects and also the Disintegration Ray, which vaporises anything in its path in a fiery blaze. Speaking of experimenting, and aliens for that matter, one of the most amusing weapons is the infamously feared Anal Probe. Shooting this will send a green probe from the gun straight up the rear end of an enemy and killing them after they run around in a panic with both hands clenching their violated butt. This silly strand of mayhem certainly lacks complexity but more than makes up for it with some cheap laughs and entertainment. 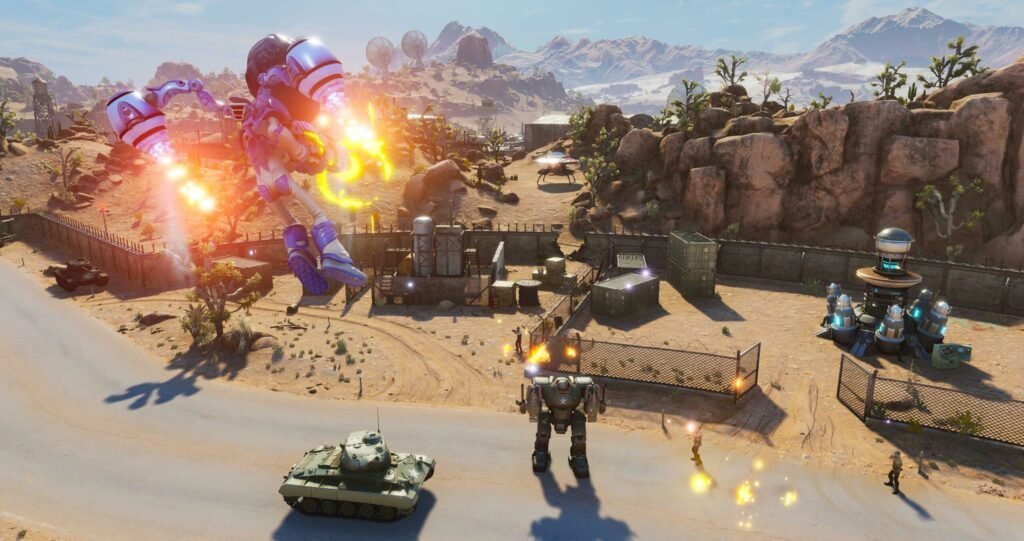 Equipped with a jet-pack and the ability to slider around with propulsion energy that simulates skating, manoeuvrability as Crypto is fun, simple and adds a layer of verticality to the combat to provide tactical advantages from above. The jet-pack requires a brief cool down after it overheats but the player is able to get just over five seconds of airtime before this occurs. It may seem brief but in the heat of battle Crypto needs to be constantly on the move and a brief boost up to rooftop may be all that is needed to regather composure before diving back into the fray. The boost function on the ground allows Crypto to slide around quickly when not in the air, serving to move to cover in combat or circle enemies or to get from A to B quicker than running.

The gameplay does not solely rely on over the top action but in some parts in also requires stealth and this largely occurs via the HOLOBOB system. Crypto is able to scan any human and assume their form. In order to sustain this façade, Crypto must regularly scan the minds of the humans to restore the amount of time he can maintain his human appearance. While in disguise, Crypto is unable to use any of his abilities or attacks. Doing so will break the HOLOBOB and expose Crypto as the Furon war–bringer that he truly is. Majestic have also set up scanners around each of the six explorable locations in the game that will rapidly deplete the HOLOBOB when within close proximity. 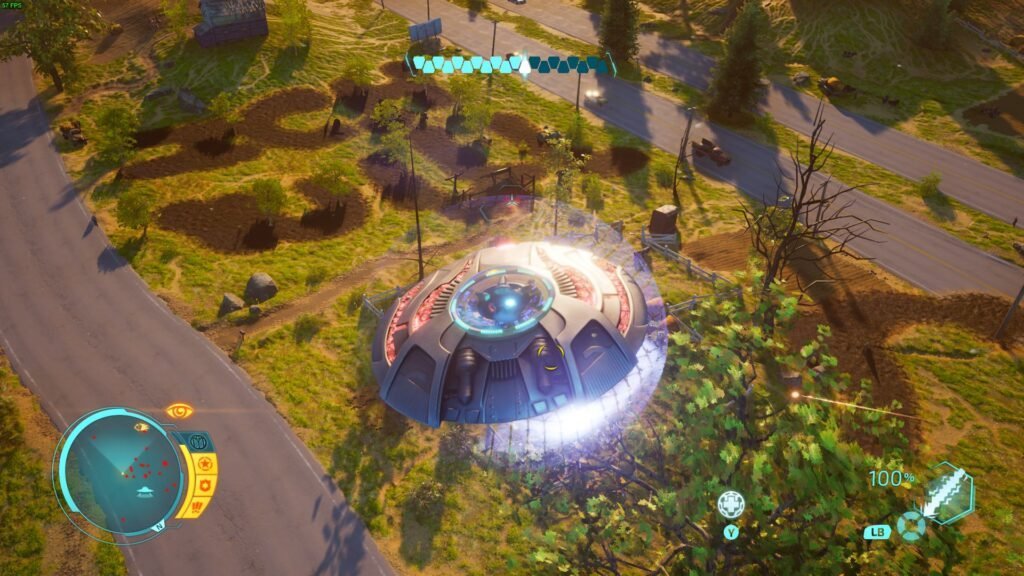 Sprinkled throughout the story are sections where player get to take the helm of Crypto’s saucer which is appropriately armed with a Death Ray, Pulse shots and the ability to abduct people, vehicles and even cows. While abducting something it can be harvested for health or ammo which is nice to see, a practical reason for doing something that is otherwise just mindless fun.

Each mission has between one and three optional objectives, such as completing a section undetected or to drown X amount of enemies. Taking the extra time to complete these will contribute to unlocking a small handful of alternate costumes for Crypto to use. Once a mission has been completed, its location can be returned to for completionists to hunt out the hidden droids or to complete a series of challenges as Crypto as well as some saucer exclusive ones. For instance, Armageddon requires X amount of dollars in damage to be caused while Abduction asks the player to launch as many of the specified target, such as cows, into the saucers abduction beam within a time limit. Each challenge has three stars to achieve and the more stars earned equals a higher DNA reward to be spent on customisation. 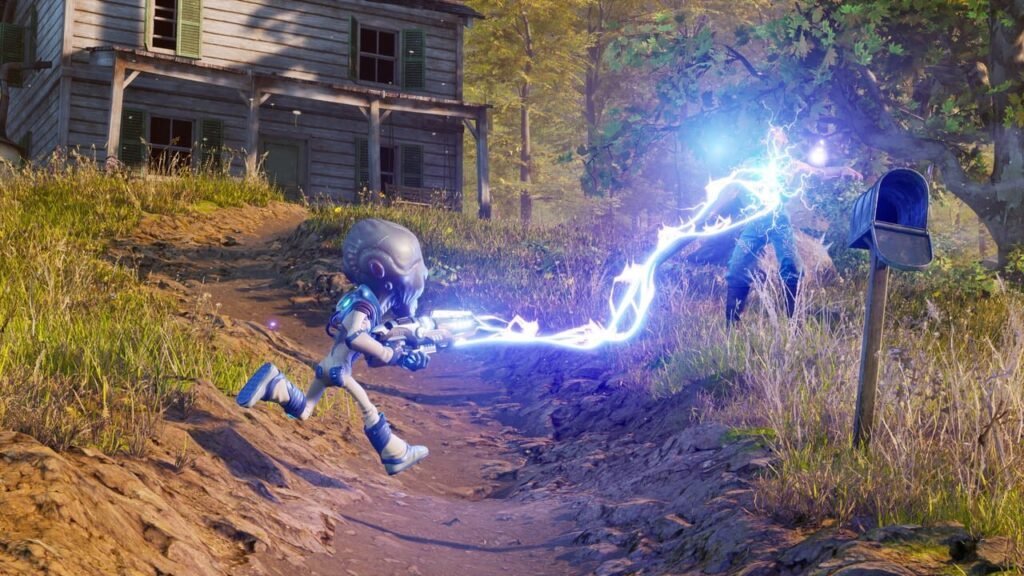 Visually, Destroy All Humans! looks great with this updated coat of paint however it is still a little outdated and shows its age. The character designs are fun and the environments look authentically 50’s inspired. The sound design is on point and the satisfying alien noises that come from Crypto’s arsenal and saucer are a case of smaller details that increase the overall presentation. 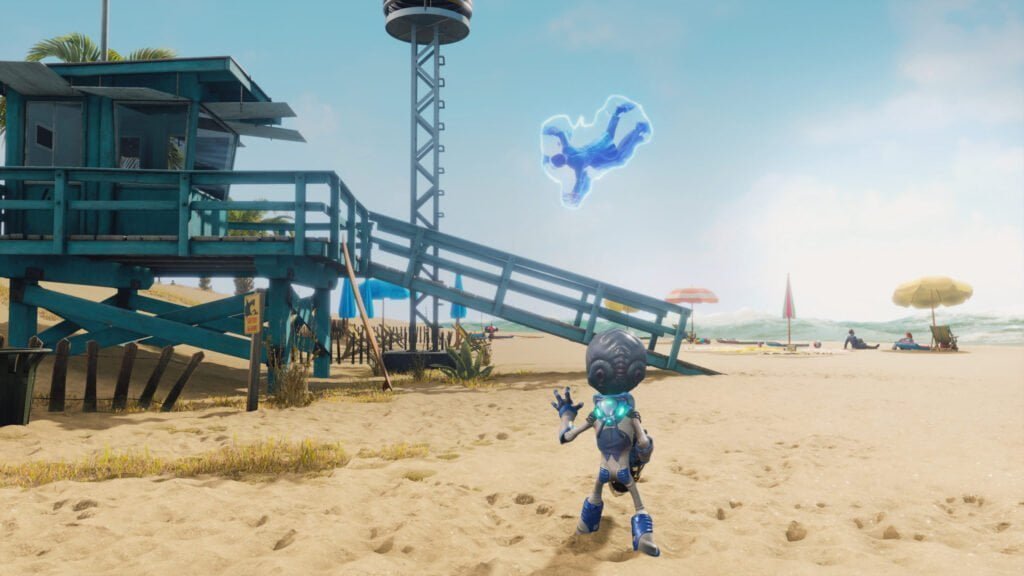 The gameplay and overall presentation isn’t raising any bars but rather does what Destroy All Humans! does best. It entertains. Black Forest Games have delivered a faithful experience for those of us who grew up with the original and one that is sure to captivate new players to the franchise. It’s fun, it’s humorous, and its 8-10 hour run time prevents Crypto from overstaying his welcome.

+ Doesn’t take itself too seriously