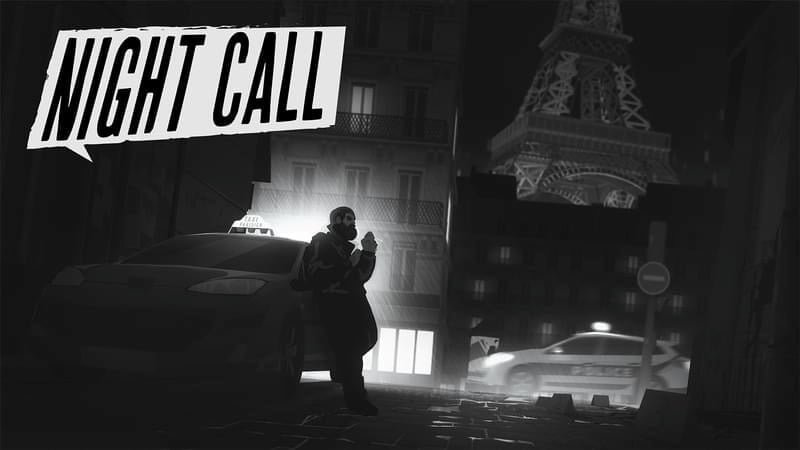 Taxi drivers are more than just a mode of transport to get from A to B. They are people too and some of them love a good chat if for no reason other than to make the trip feel quicker. They’re available day and night, rain or shine. Like a bartender, taxi drivers meet dozens upon dozens of new people every single day and have an unrivalled opportunity to converse with these different people from all walks of life. Night Call puts the player in the role of a taxi driver amidst the cold nights of Paris in an interactive, choice based and text driven narrative with minimal animation. Waking from a coma after surviving an encounter with a serial killer, the player is propositioned by a detective, known only as Busset, to help the investigation to identify them and make an arrest by keeping an ear out and uncovering information from the Parisian passengers he provides his service to.

Night Call has 3 investigations which can be selected at the start of a new game and can be completed on one of three difficulties which really only differ on time reduction and money. Every action in Night Call whether it’s a taxi fare, reading a newspaper, listening to the radio or driving to a location for clues costs time from their shift and when it reaches 4am the shift is over. The other cost to the player is fuel. Fuel can be replenished at a gas station which costs money, no different to real life. The player earns money by completing taxi fares and receiving tips, the latter is based on how the player chooses to engage and interact with the passenger. 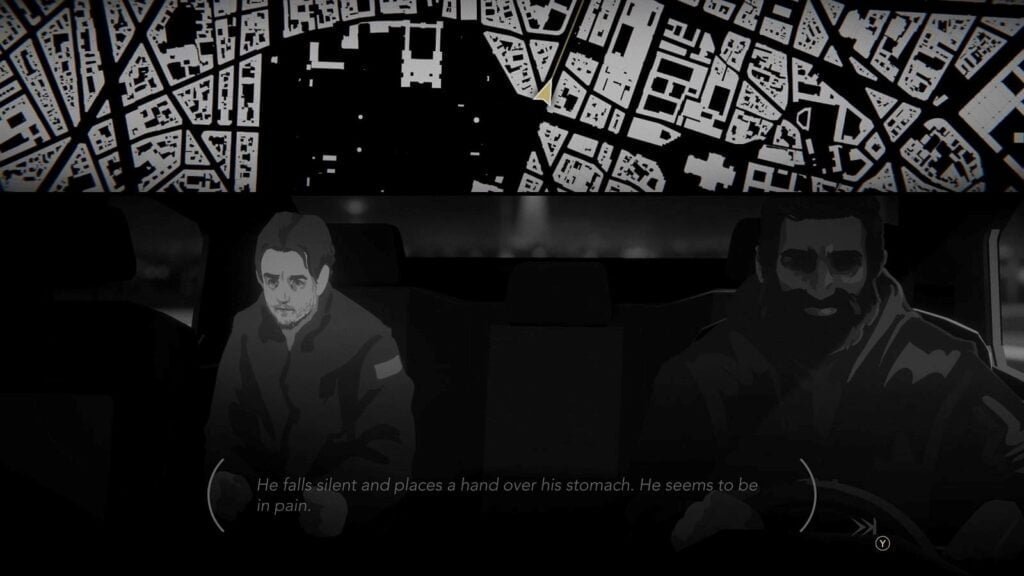 Stylised as a noir, black and white interactive experience, the animation feels like a slightly animated comic book scene. The characters heads move around, the city passes by through the windows and a minimal amount of animation from characters arms and accessories they may be using prevent it from feeling static. The decision to have every single piece of dialogue be presented as text instead of having voice overs definitely prevents Night Call from maintaining any sense of pace and holds back the full range of emotion that is quite cleverly depicted by the player characters observations of their body language, tone of voice and imagination. Each conversation is surprisingly deep whether it’s rooted in an emotional decision or event the passenger is going through, relationship issues or just someone having a difficult go at life. The conversations often veer into meaningless in regards to pushing the narrative forward and unlocking clues to help the investigation but they are thoughtful and often authentic human conversations that are interesting. That’s not to say things don’t get a little weird as masked vigilantes, passengers that ask to be hit on, ghosts and even a black cat that seemingly nods and shakes it’s head as though it understands what is being said to it and leaves a tip help keep things a little different and unexpected. Throughout every conversation the player has a series of dialogue choices to make while the rest is played out automatically. These choices can change the mood of the conversation and can either influence or ruin possible information of the serial killer for passengers that may have any to share. 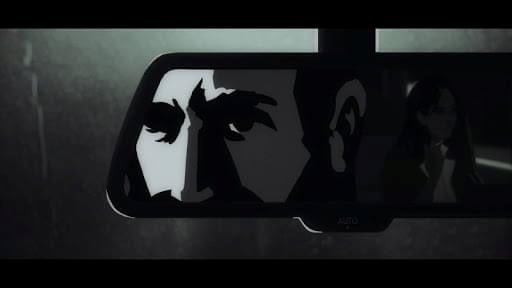 At the end of the night the player is taken automatically to their apartment to interact with an investigation board. Photos of five suspects are pinned to it and have clues and details attached by string that indicates their connections. There are files, reports and  clues to investigate below the board which consume time before the player is forced to sleep. When no more investigating can be done at the board, the player can hold B to end the night so that the next shift can begin. 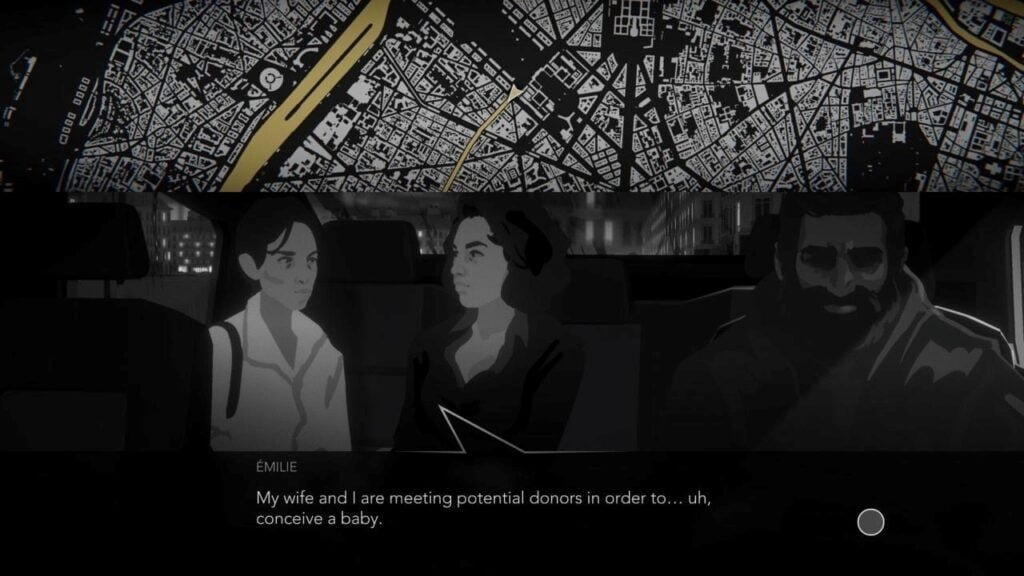 The map is littered with passengers to pick up, gas stations and locations that might yield clues. Each passenger when driven to will reveal their name, the distance of the trip and the fare that will be paid. The player is able to accept or refuse any fare though each trip made will consume time and fuel regardless. At predetermined intervals the player will travel to a fare but will instead have Detective Busset enter the car to discuss the case. On the sixth night after returning to the investigation board in their apartment the player will be called by Busset to pick a suspect for them to move in on. If selected correctly, the player will be told their intel was good and they must collect the suspect and deliver them to a trap led by Busset and the police. These fares are the most tense as inevitably the killer clues on to what is happening and the players choices will shape the outcome whether it’s an arrest or death. Luckily, failure returns the player to the main menu where they can resume their game from the point they are asked to identify the killer. Some trial and error with the trip to get the killer to confess while also avoiding death is fun to see play out and the minimal time lost if unsuccessful doesn’t burden the experience. Each investigation takes between 2-3 hours only so all 3 can comfortably be done in less than 10. 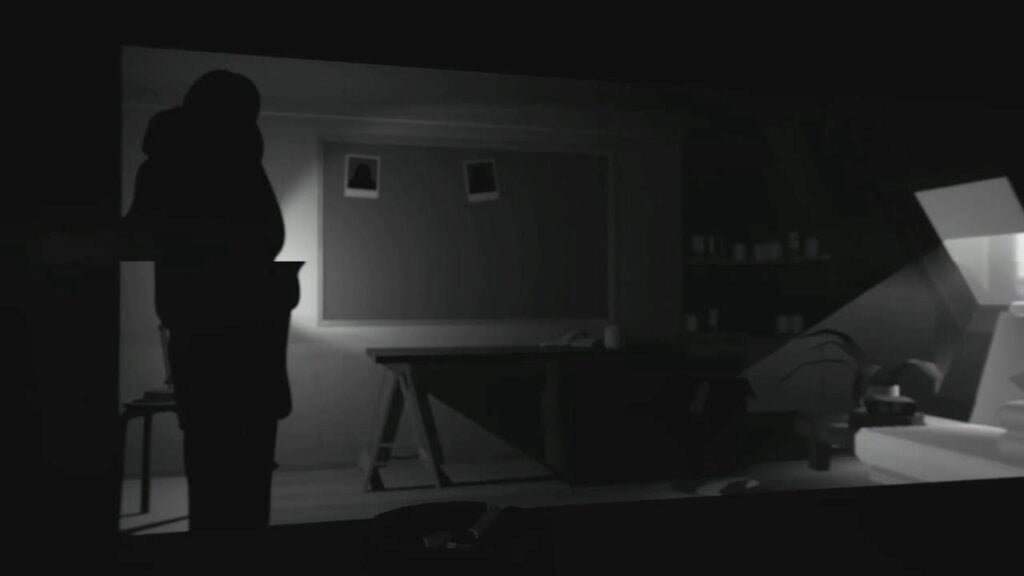 Tonally Night Call is very bleak. The black and white artistic design, the text driven dialogue and elevator style music keep the overall experience from really coming together in a tidy package. The conversations are interesting but more often than not unrewarding in regards to the investigation.

The Monkey Moon and BlackMuffin Studio developed Night Call is a unique interactive experience that is both interesting and lacking in meaningful story progression. The brevity of each case works in its favour as the game never manages to develop a pace outside of that of a slow, trickled murder mystery that fails to really pay off. It’s nice that each investigation has its own set of passengers though some are present across all three, this subtle variety allows for each investigation to feel at least a little different than the others.

– Most fares serve no purpose