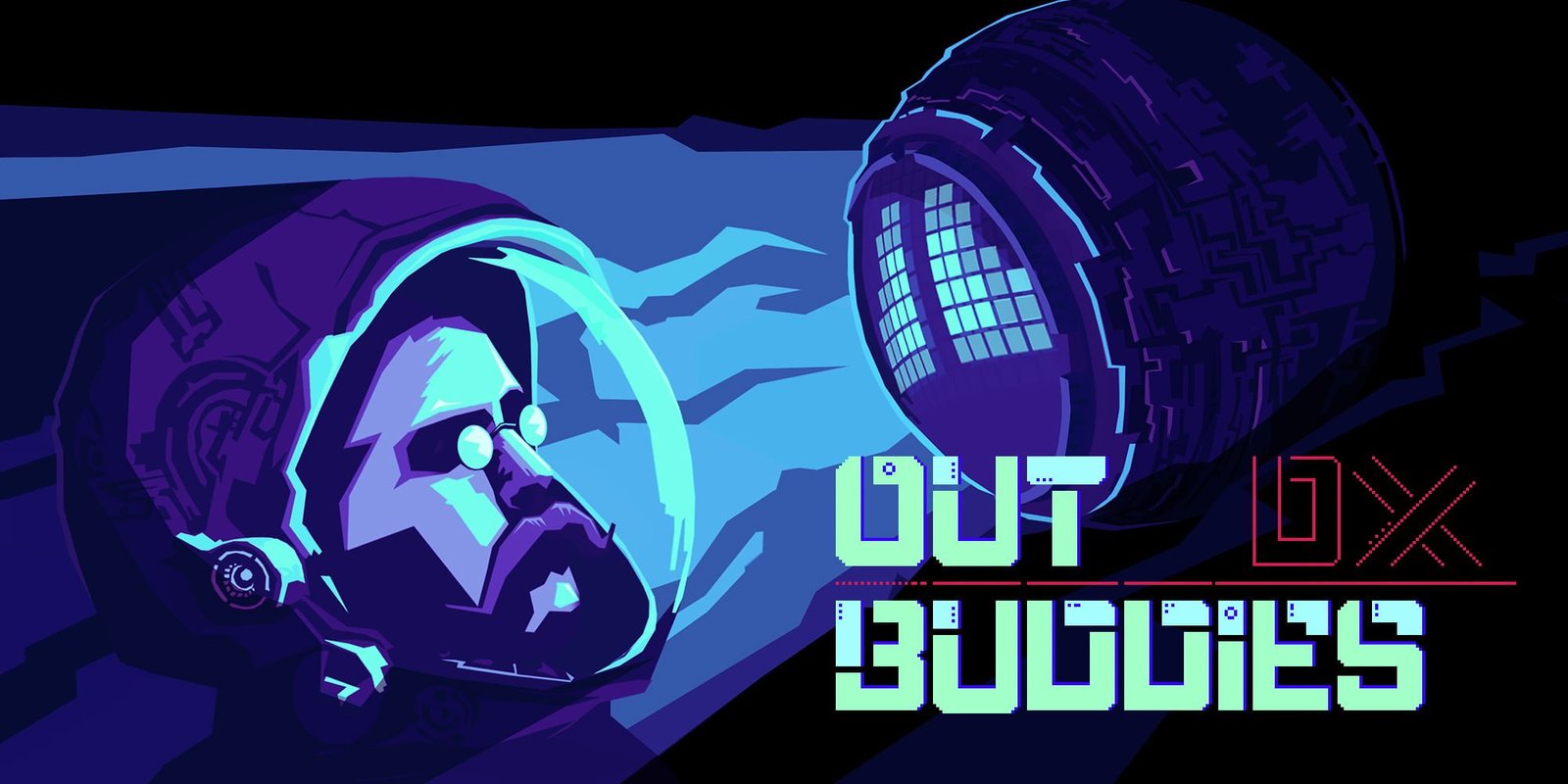 Outbuddies DX is a pixel art metroidvania game that thrusts the player into the role of marine archaeologist Nikolay Bernstein after he encounters an epic storm that drags him 36,000 feet below the surface. He wakes amidst ancient ruins of the forgotten city of Bahlam, home to a lost civilisation known as Wozan that have unwillingingly served the Old Gods for the last 5 000 years. With the premise established, exploration of this labyrinth relies on platforming and discovery of weapons to activate gates to travel further into the mysterious sub-oceanic dungeons.

Developed by a single man in Julian Laufer, Outbuddies DX pairs the player with a drone named Buddy to play through and uncover the mysteries surrounding the Old Gods and the Wozan enslaved by them. The player’s character wears a suit that is powered by steam with evasion techniques such as a dive roll that uses steam similar to energy, requiring a brief cool down before re-use. This dive roll can be used to evade enemy attacks that when used correctly will negate damage. Armed with a single gun at the beginning, the player’s arsenal expands with exploration, discovering new weapons and alternative fire upgrades that can be used on enemies to varying levels of effect. There are an assortment of enemies that inhabit this lost world; they range from piranha like fish that will swarm the player, flying fanged oddities that swoop if the player gets to close and a mixture of other ground based and wall climbing threats. The enemy designs are unique yet so abstract that is difficult to identify what they actually are. 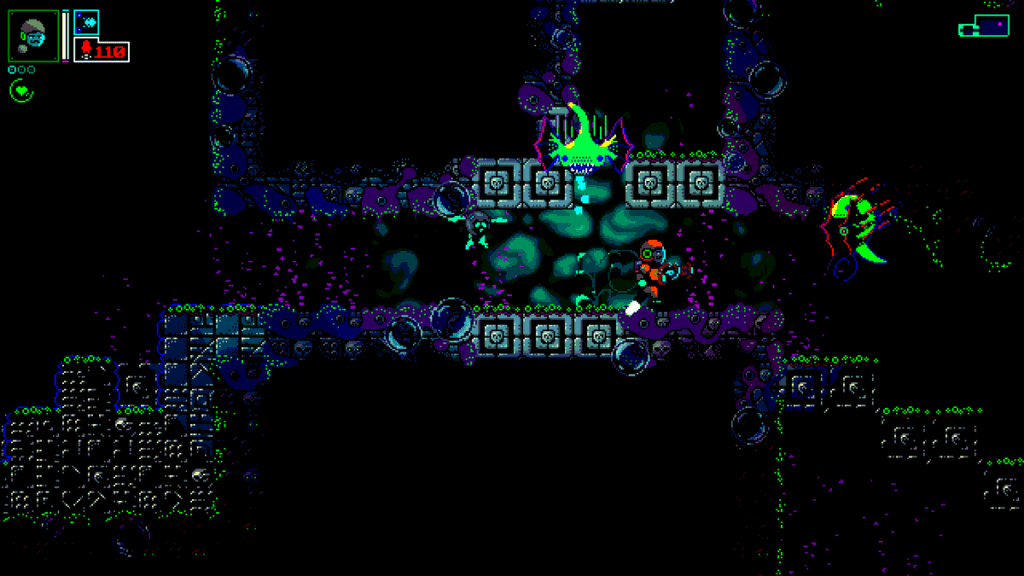 Enemies are just as deadly to the player as environmental hazards that decorate the labyrinthine ancient city. Strategically placed spikes regularly present themselves underneath platforming situations such as raised platforms and rocks. The platforming itself can require precision execution and traps like spikes as a consequence for a mistimed jump become frustrating fast. Leaping to a wall and spring-boarding off of it is a mechanic that sounds so simple yet it wastes no time in becoming just of one of several trial and error mechanics that can aid a players to descent to madness.

The drone that accompanies the player, Buddy, can be switched to control in order to assist with platforming and navigation. Buddy can be used in typical drone fashion to survey the area ahead, be it above, below or to the side and allow the player to see what threats may lay ahead. Alternatively, Buddy can move rocks with a telekinesis like ability to position it for the player to jump on and further progress through the room. This is a simple mechanic that feels like a missed opportunity as moving a rock seems very limited compared to the potential Buddy could otherwise serve such as further puzzle elements or even distracting or engaging nearby enemies. 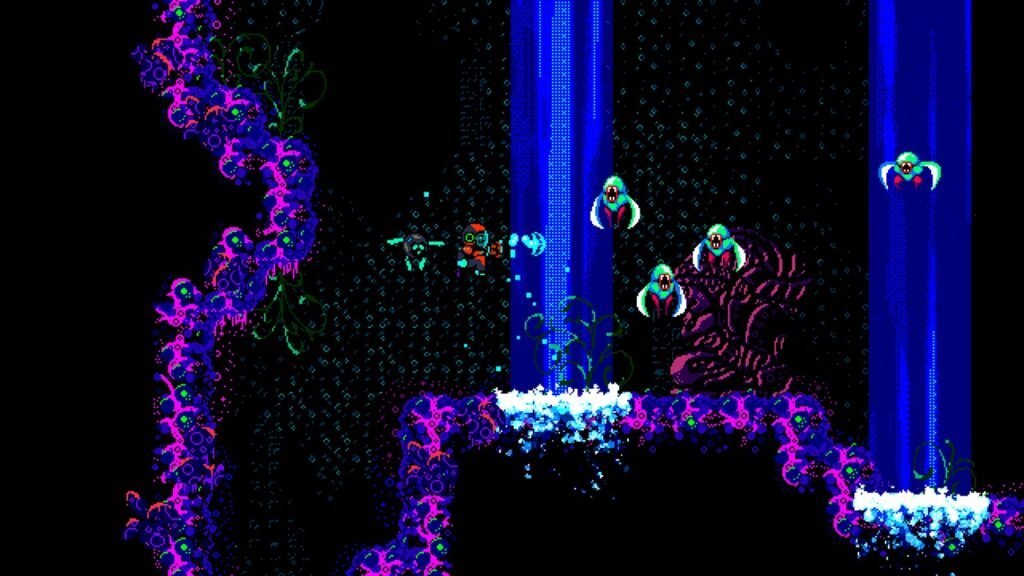 Exploration will reward the player with new weapons and equipment such as the very useful Steam boots, allowing the player to jump higher, similar to a jet pack until the steam gauge depletes. The steam gauge is recharged quickly by maintaining contact with the ground. The player has access to a map that is more daunting than helpful. Areas that have been explored are illuminated and decorated with various symbols to identify things that can be found or interacted with, some of which can only be done by backtracking with new equipment.

This game is massive in terms of these dungeon-like areas to explore; they themselves are not overly large or open though their verticality adds depth and frustrating platforming. It’s the sheer number of these that are overwhelming as there would easily be over 100 areas to explore and a good number of which unlockable only when specific weapons have been unlocked, which are needed to open the gates that react to the specific ammo. Luckily there are a handful of teleportation portals that can be activated to allow the player to transport to a corresponding portal across the map, that at least somewhat eases the tedium of backtracking. 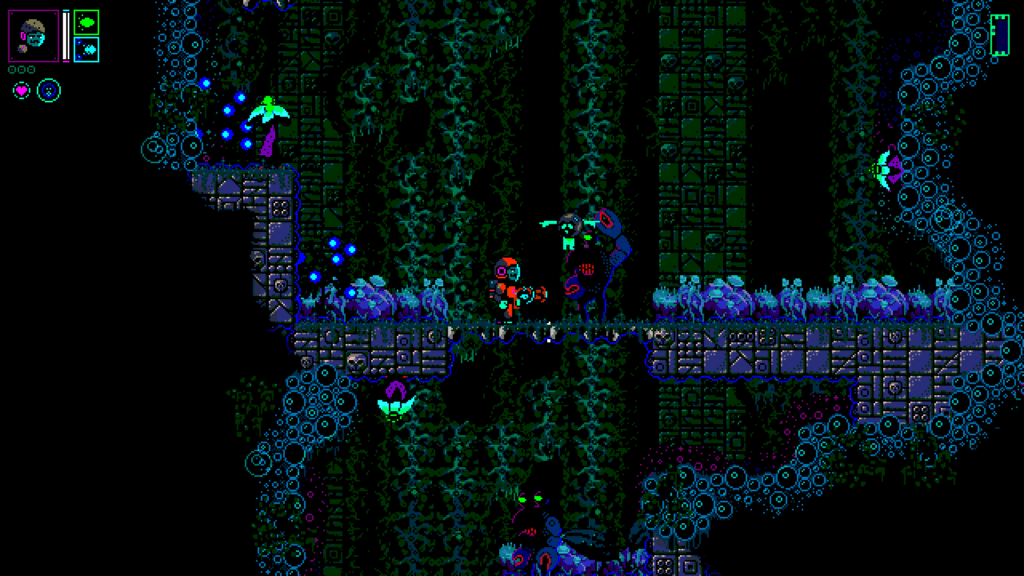 Hidden among the lost city are a handful of pretty epic boss encounters. These pit the player against large monsters that are almost Lovecraftian in their aesthetic. They look exciting and their assault is dynamic enough and varied from each encounter to present the player with a genuine challenge. Some of these are crushingly difficult and one in particular kept me trying for over an hour to work out how to defeat them before dying myself.

The pixel art design is always something that catches my attention, there is something playful about this design approach that manages to remind me of titles from older console generations dating back to the Sega Mega Drive for instance. The wealth of dungeons all feel very similar though with the exception of some key locations where the mythology shines such as statue laden areas and those that Wozan populate, these feel grand and provide a sense of marvel that the otherwise safe and repetitive cave-like areas fail to capture. A modern take in the genre that remains faithful to those that came before it, Outbuddies DX feels like its controls are as dated as its visuals which inescapably frustrates but feels very rewarding when difficult obstacles are overcome. The sound design is playful and appropriately retro inspired with the weapons and enemies providing nostalgic sounds that feel familiar. The text-based dialogue contains profanity from the opening line so this alone shifts the intended audience to a mature age bracket. The game can be paused at any time and due to the difficulty of a number of sections, the player will likely take a breather and reassess their plan for tackling the situation at hand will likely use this feature often.

Outbuddies DX is fun though frustrating and tedious but also rewarding with success. The retro approach provides a false sense of security in that given that it has released in 2020, its finicky controls and precision platforming feels like a title 20 years old. For metroidvania fans that enjoy a challenge and are perhaps more experienced with this type of gameplay and timing, Outbuddies DX will appeal and provide a unique and interesting story to boot. For more casual gamers and platforming fans, the difficulty thtat causes frustration may strip away some of the enjoyment. I personally enjoy being challenged by a video game and have enjoyed metroidvania games for nearly two decades and the often brutal experience over the 20 odd hours it takes to complete pushed me to my limits. This is not a casual experience but for veterans if the genre there is a lot to love.

– Too many areas feeling similar