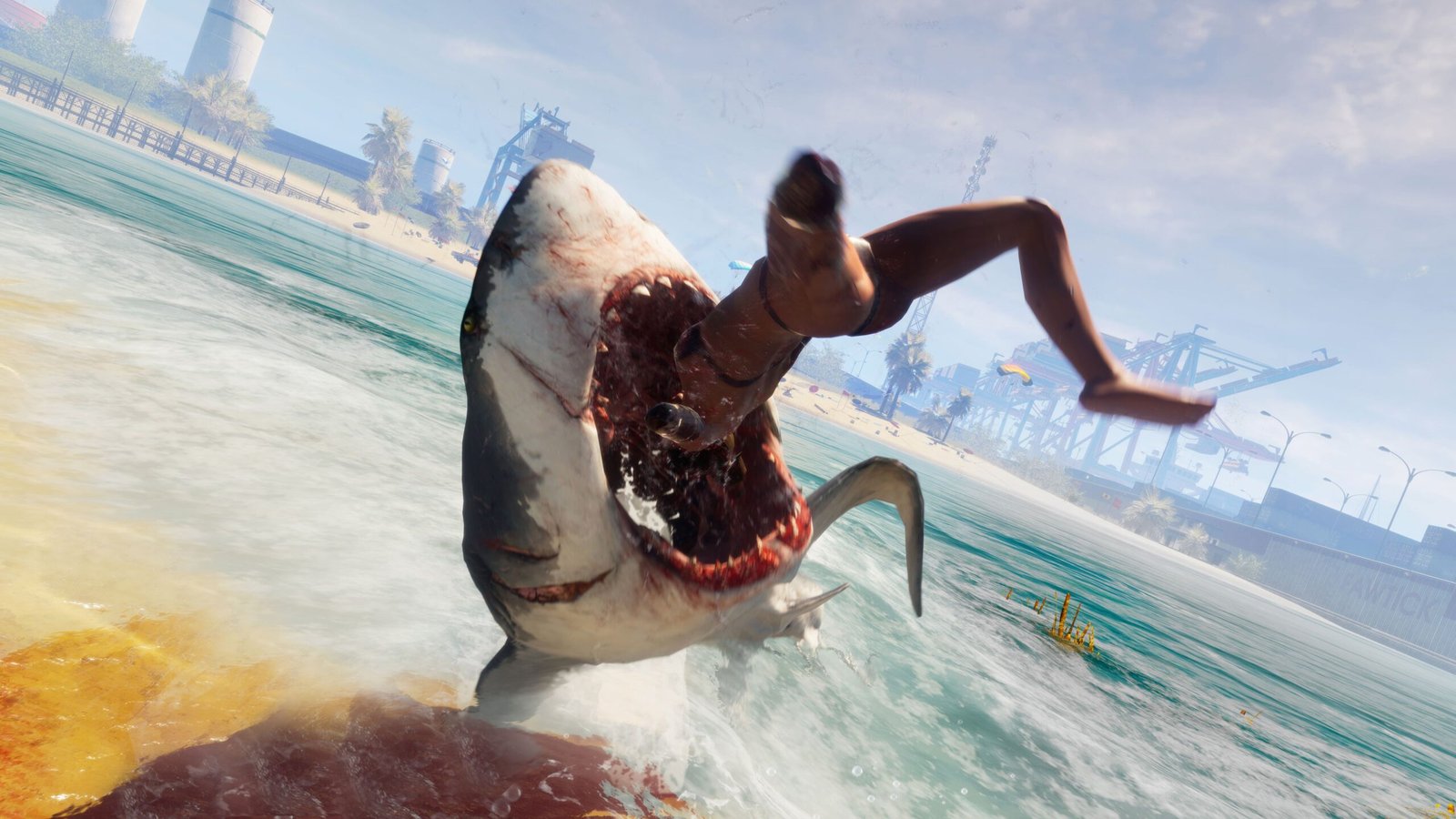 Fear of sharks is not unreasonable and many share it. The thought of swimming peacefully at a beach and being ripped away by a vicious shark does not seem like a lot of fun. However, from the shark’s point of view it sounds like a great source of amusement and this is where Maneater comes into the picture, placing the player in the role of a bullshark to rip, tear and eat everything that crosses its path, while also destroying boats and hunter patrols in this third person shaRkPG. If you have ever wondered what it would be like to swim fearlessly through the ocean, Maneater is for you.

The prologue sees the player put through a brief but efficient tutorial, teaching the essentials of lunging, evading, knifing (which refers to swimming near the surface with only the fin protruding), using the tail–whip attack to knock back threats and of course, how to bite and mercilessly thrash some of the larger predators to deal significantly more damage. Following this, the player’s shark is captured and killed by shark hunter Scaly Pete. Realising his latest conquest had a pup ready to emerge, he marks the pup’s back with a cut and releases it into the wild, with his reasoning being that he knows he will come across this pup in the future and it won’t be so lucky. Scaly Pete’s cut-scenes are presented as a reality TV show, complete with comical narration from Chris Parnell, known from TV series such as Saturday Night Live, 30 Rock and Rick and Morty. These sequences are littered throughout the roughly 8 to 10 hour experience and serve as the only cinematic narrative. The narration humorously appears throughout the general gameplay and for the most part positively impacts the experience but repetition of lines soon becomes stale. 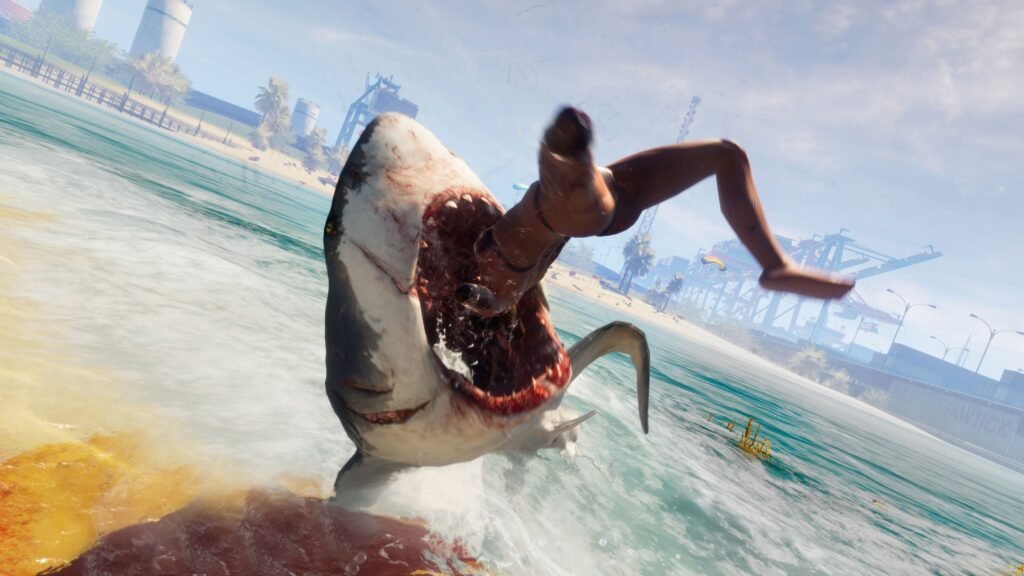 As the player assumes the role of the pup destined to meet Scaly Pete again, they are placed into the first of 7 sizeable regions, with each of these regions introducing new types of aquatic wildlife to eat and predators to be eaten by, which include alligators, hammerhead sharks, orca whales and swordfish. These regions are diverse, ranging from a gritty bayou to posh beach resorts and offer a string of primary and secondary objectives to complete, such as killing certain amounts of a type of fish or humans, slaying stronger threats and defeating the regions apex predator, a powerful variant of the common threats found in the region. The mission variety is soon revealed to be shallow, offering up essentially the same combination in each new region. Completing a certain amount of region activities will activate a Scaly Pete cut-scene and open up a new region for exploration. Scattered throughout these regions are an assortment of collectibles to find, such as licence plates and landmark signs to destroy, many of which serve as clever easter eggs or references to pop culture that I will not spoil. 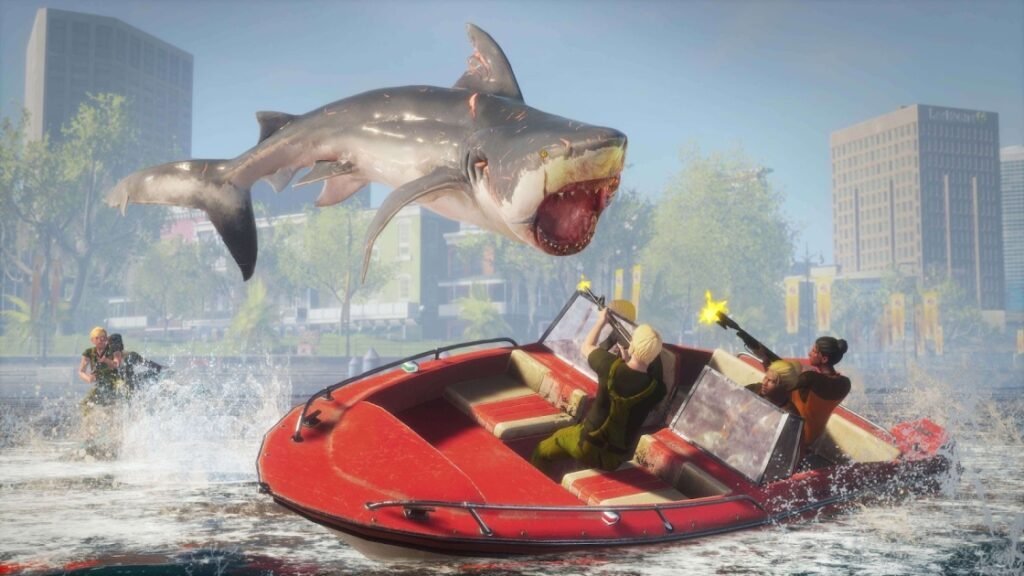 Perhaps the most prized possessions of the sea are nutrient chests to be found and destroyed, rewarding the player with nutrients used to upgrade the shark’s evolutions. These evolutions are similar to mods that can be equipped such as bone armour or bio-electric enhancements for the shark’s head, fins, jaw, body and tail. These have their own passive and/or action specific stat increases that can provide an edge for each scenario, whether it’s destroying boats or dealing area of effect damage upon contact. These can be mixed and matched, with each additional body part equipped with the same type the shark receives a small and unique stat buff and increases with more parts of the set equipped. Organs can also have an assortment of abilities applied that can also be upgraded, such as the ability to spend greater lengths of time out of the water before dehydration sets in, the amount of health and nutrients gained from eating prey and wider range of detection when using the sonar ability. The sonar is helpful for identifying collectibles, predators and prey to hunt.

The shark can only be upgraded or kitted out with evolutions inside each regions sole grotto, serving as a safe haven from danger. With each new grotto discovered, as long as the player is in no immediate danger they are able to fast travel between them, making it easier to backtrack to complete any outstanding objectives or collectibles. 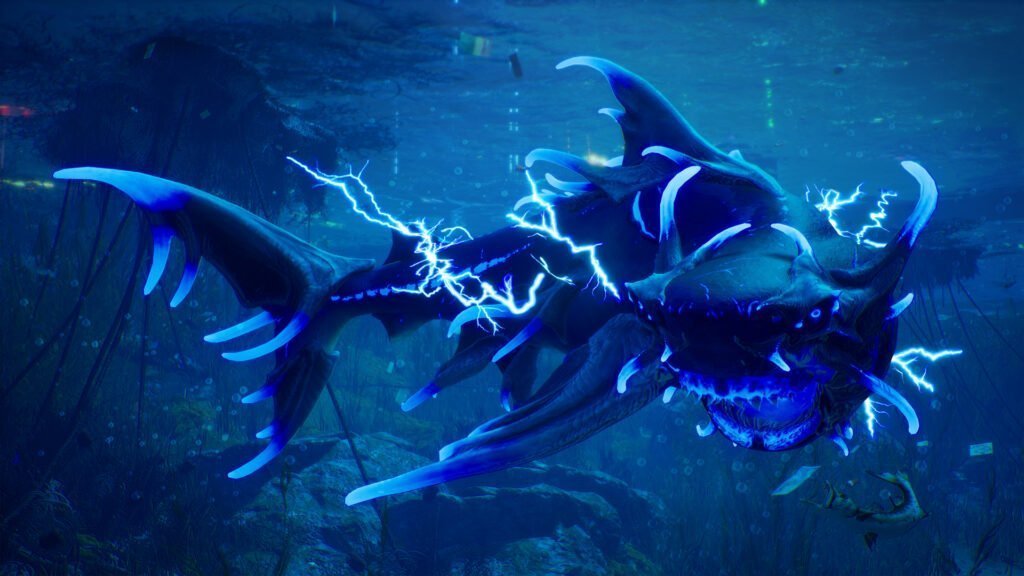 As a pup, the player is both the hunter and the hunted but as the player gains experience, the pup grows into a teen, adult, elder and ultimately mega shark. Each growth increases core stats and makes the shark physically larger but also stronger and more resilient, able to easily conquer those that proved difficult as a pup. Alligators for instance are best avoided as a pup but as a teen shark they soon become just another meal. Innocent humans can be attacked while they are swimming or snatched from land in hit and run style attacks, the shark has an oxygen meter that slowly depletes while it is outside of the water and can only afford brief windows to jump on land and lay waste to any unsuspecting bystander in sight.

As the human body count builds, a threat level increases and upon filling it waves of hunters will arrive to kill the shark. Destroying the hunter’s boats raises the sharks infamy level, a circular meter on the top right of the screen that when filled will trigger the arrival of a bounty hunter boss to defeat. Doing so will reward the player with a new evolutionary enhancement to equip. These bounty hunters will only relent if line of sight is broken for long enough, and as the player’s infamy level rises and the more bounty hunter bosses are defeated, the difficulty and damage they dish out increases. When the player has reached the later levels of the shark’s growth these begin to become less dangerous. 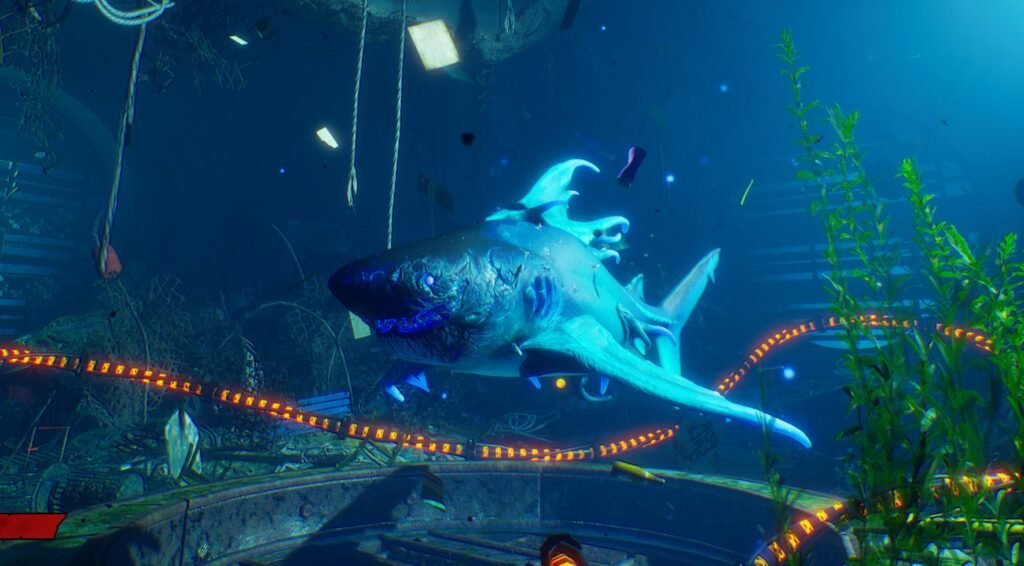 Progression in the early part of the game is rewarding, as with each growth a predator becomes a prey and a new threat takes its place as the difficult enemy to be avoided. By the time the shark has become a mega, there is no mistaking who assumes the role of the apex predator. If the player has been exploring diligently, completing optional missions and conquering all those who dare attack it, the player will find themselves overpowered with little fear of defeat or difficulty that includes the final boss battle against an enraged Scaly Pete.

The character models are impressive, with the shark, Scaly Pete and the bounty hunter bosses receiving the largest attention to detail when compared to the likes of the regular bounty hunters or human entrees. The aquatic wildlife is equally impressive and adds to the immersion of the menacing aquatic biomes. The animations are all smooth and believable; the attacks are violently satisfying and gloriously paint the sea red with blood and guts. 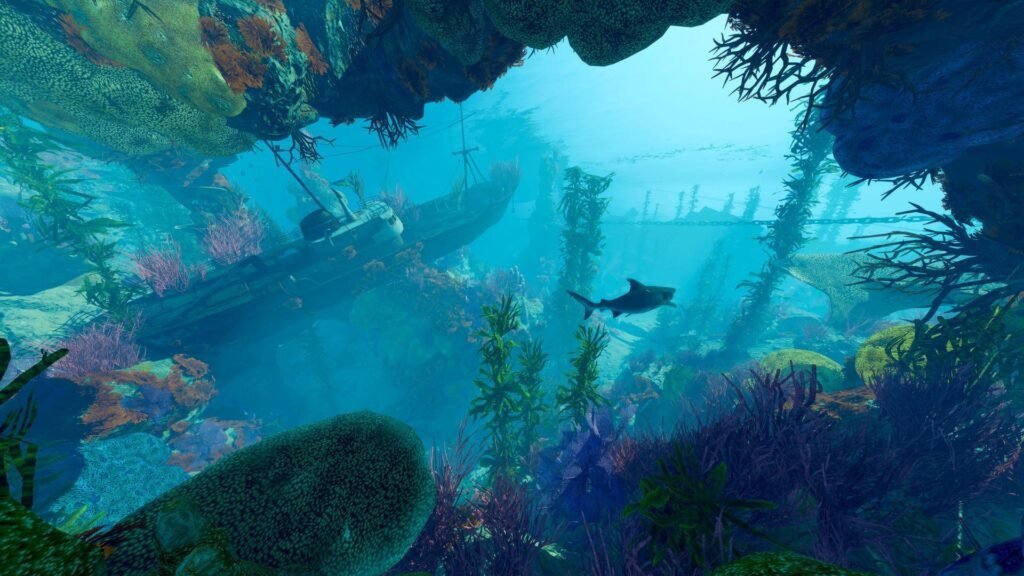 The sound design is excellent, while submerged there is that distinct underwater sound which provides wonderful contrast when swimming on the surface. The sound effects of the various wildlife are accurate and fearsome, while the satisfying crunch of their lifeless bodies rarely disappoints.

As this game has players ripping everything above and below sea level apart this is not one to be played or witnessed by younger players. The game can be paused at any time if the guilt of tearing through an entire beach full of people gets too much.

Tripwire Interactive have created a world that is fun to explore and full of both predators and prey to rip apart that ultimately leans towards repetitive and lacking in variety as the game pushes on. The simplified gameplay featuring single button prompts is easy and accessible to become familiar with, but unfortunately as the shark grows and becomes more powerful, the threat and challenge of the game diminishes which puts the player in a position of power that is not likely to be overcome. The joy and satisfaction of mindlessly wreaking havoc on innocent swimmers is one that holds on through until the end and at the reasonable launch price of $59.95, Maneater is worth sinking your teeth into.

+ Shark evolutions and upgrades are fun to experiment with