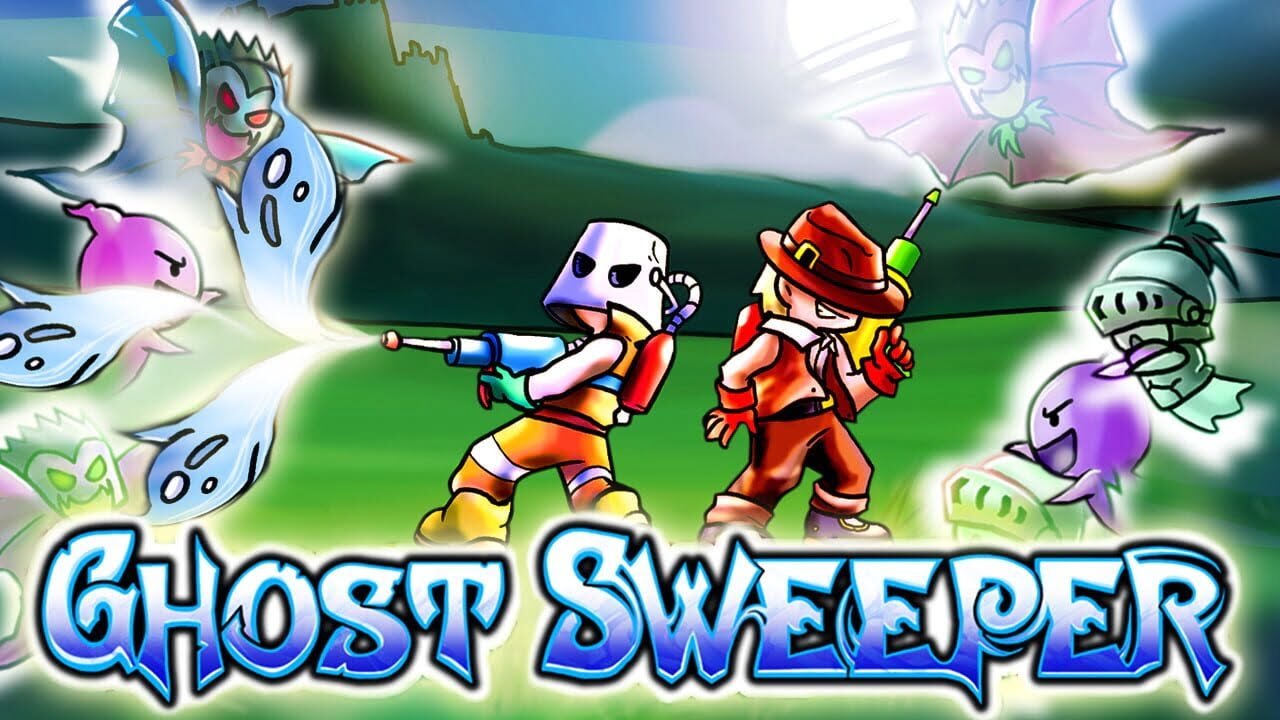 Ghost Sweeper is a single player 2D Platformer reminiscent of those that scrolled into our hearts back in the 80’s and early 90’s. Unashamedly and intentionally inspired by Solomon’s Key, a classic from the late 80’s that retro players may recall, 7 Raven Studios have delivered an authentic retro-arcade experience with a simple concept of a key that must be retrieved to unlock the door to the next stage. Getting the key isn’t as simple as that though and some fun but calculated platforming is required to do so.

Playing as either bucket-as-a-helmet wearing John or adventure fedora toting Indy, each character had a unique ability that offers a minute variety in gameplay to the other that has no impact on the ease or difficulty in completing levels. While John can suck enemies into his pack like a Ghostbuster and shoot them as ammunition, Indy can shoot a fireball. This is the only non-cosmetic difference that separates the two and alternating between them helps keep the gameplay that little bit fresher. 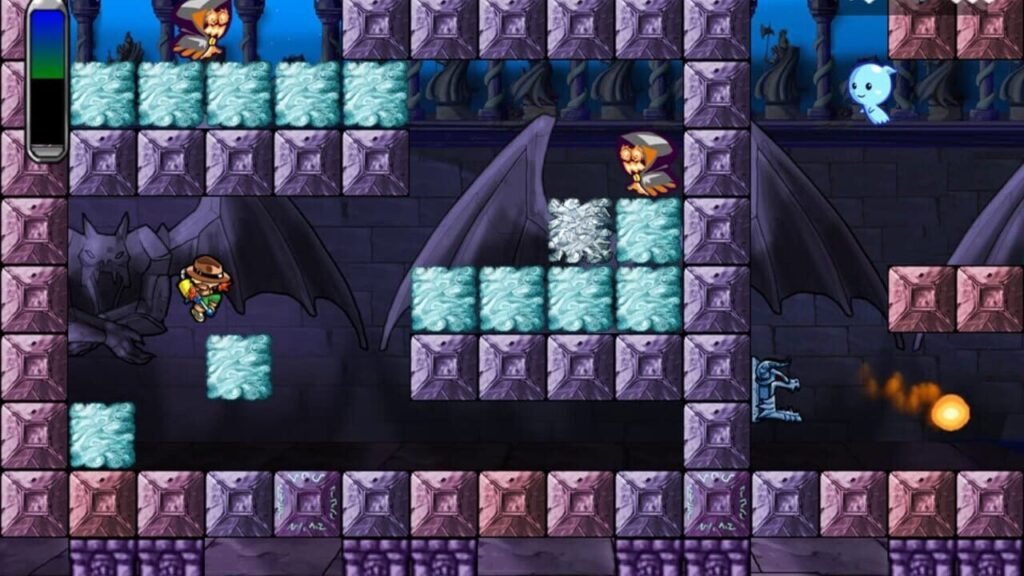 Regardless of the chosen character, the player is tasked with navigating the side scrolling screen while avoiding or eliminating enemies, collecting optional treasure in the form of coins and diamonds as well as Magic Power pickups which replenish the ability to ghostbust or shoot fireballs. The primary mechanic is the ability to create and remove bricks of ice that can be used to jump on, block projectiles or to box enemies in. Calculated removal of pre-existing blocks can also cause an enemy to plummet to their demise.

The overall gameplay concept is simple but the result itself is actually somewhat challenging, particularly in the later stages of the 10 worlds on offer, 2 of which are hidden. The addition of portals, campfires, saw blades and other dangerous obstacles, the player will endure a lot of trial and error on their quest to reach The Dark Lord’s tower and ultimately defeat him. That brief summary is as in depth as the story goes in Ghost Sweepers but this is not a narrative experience, instead it is a stylistically simplistic but challenging arcade vibe that feels legitimate to its source material. 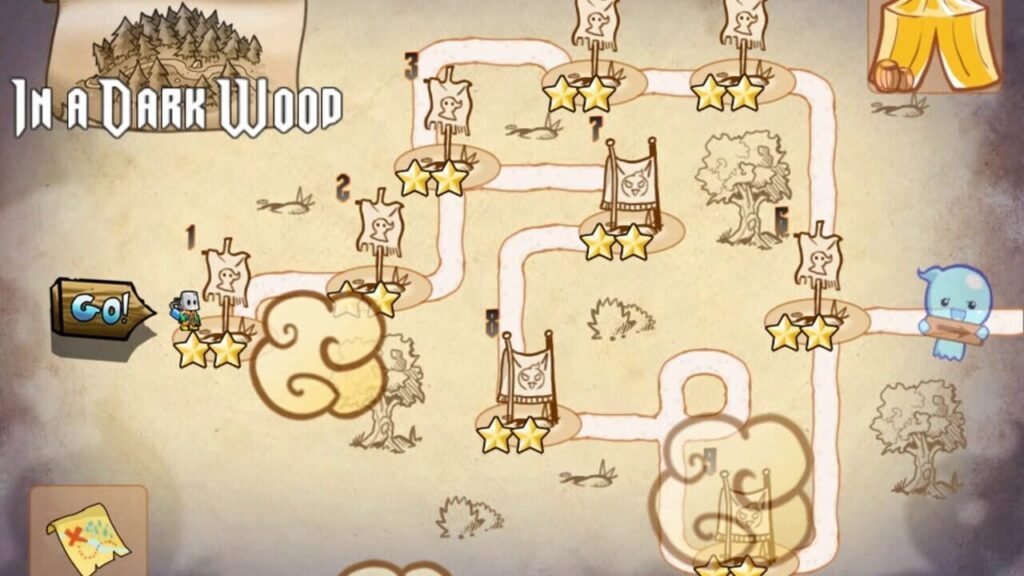 The controls are simple, asking no more than 3 buttons from the player to utilise. The platforming itself feels a little clunky, possibly by design to offer an experience as authentic as those that inspired it. While admirable to replicate that level of detail, a little more fluidity would make the game feel a little smoother. 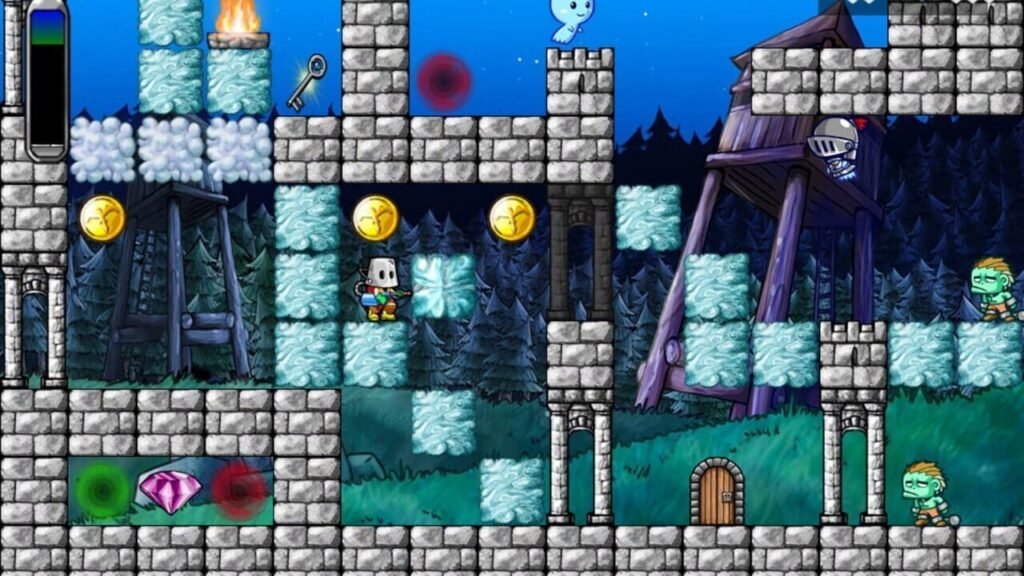 The enemy variety is a fun assortment including ghosts, skeletons, maniacal pumpkins and other weird creatures that feel right at home in this genre. The stage designs are all varied too, with each world taking on different theme.

For the completionist players there is a time limit for each stage to be completed that merely offers alternate states of completion. The game does not end of the timer expires, instead upon completion a star is awarded for completing within the time limit. A star is also obtained for simply completing the stage and another for collecting all of the treasure. 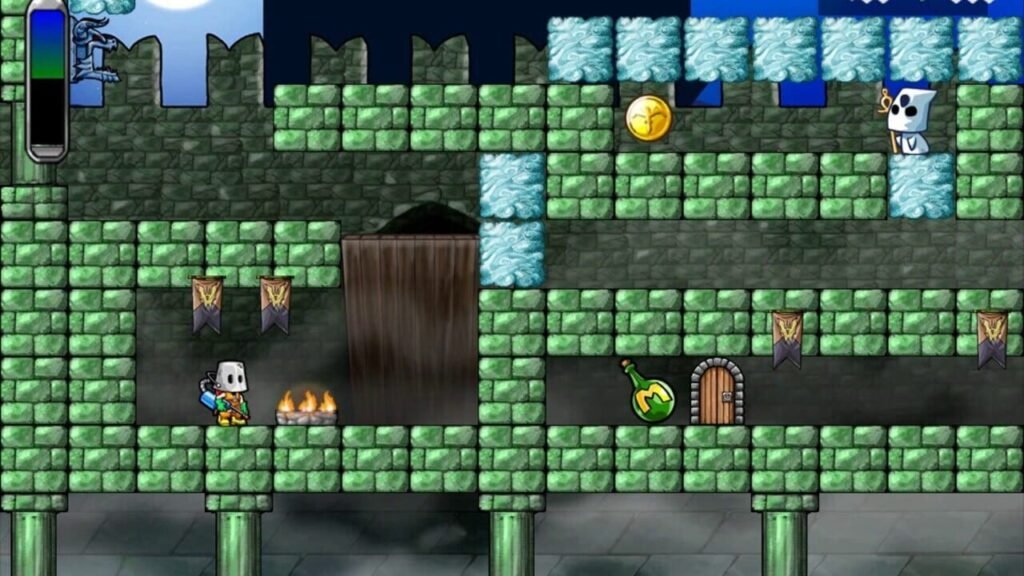 Ghost Sweeper is a fun, family friendly retro affair that can be enjoyed by players of all ages. Older players may enjoy the throwback to the classic games they grew up with while accessibility remains intact for younger players to enjoy a style that is all but forgotten with modern releases. Offering challenge amidst a simplistic style, Ghost Sweepers is a charming reminder of the types of games that a lot of us grew up with and inspired the passion we have today.

– Feels as clunky as the titles that inspired it

* A review code was provided by the Developer/Publisher for the purpose of this review. *