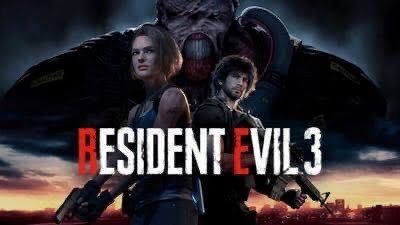 Resident Evil 3: Nemesis released over 20 years ago on PlayStation to critical acclaim. Almost in celebration of this anniversary, Resident Evil 3 was remade for current gen consoles following in the footsteps of last years Resident Evil 2 remake. Featuring stunning visuals, modernised gameplay and a refined story experience, Capcom’s remake had a lot to live up to for fans of the original and omitted features may leave them wanting but for newcomers that are playing RE3 for the first time with this release, including myself, this is an excellent way to do so.

This third person survival horror plays more like an action shooter title that pits the player as former Special Tactics And Rescue Service (S.T.A.R.S) agent Jill Valentine, a badass heroine that proves to hold her own against the zombified citizens of Racoon City. The T-Virus outbreak has spiralled into a zombie apocalypse and if that threat wasn’t enough, a genetically mutated bioweapon known as Nemesis is hell bent on murdering her and all other members of S.T.A.R.S. Nemesis is swiftly introduced into the story as he devastates Jill’s apartment building in the opening minutes. Unphased by bullets and seemingly indestructible, Nemesis hunts Jill in an action packed highly cinematic sequence that leaves her apartment building in ruins. A handful of Nemesis encounters are encountered throughout the 4-6 hour campaign and these are typically cinematic with him requiring to be damaged to a certain point before triggering the next scene in the sequence. Outside of the narrative moments, he randomly appears while Jill explores Racoon City and will pursue her until he is weakened enough. They’re not difficult situations or frequent enough to become annoying but add a layer of suspense and spontaneity that is otherwise lacking during open exploration. 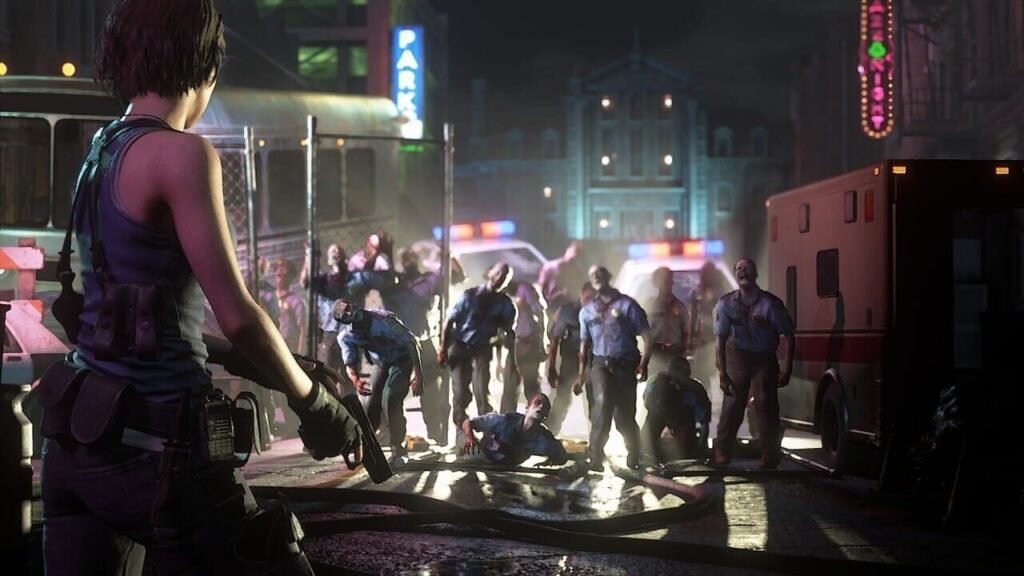 There are a few chapters where the player takes control of Umbrella Biohazard Countermeasure Service (U.B.C.S) agent Carlos Oliveira, a supporting character introduced early into the story. Carlos plays pretty much the same as Jill but it’s his sarcastic and wisecracking personality that makes him standout. There are an assortment of weapons to be found outside of the handgun such as a shotgun, grenade launcher and assault rifle for Jill to devastate Nemesis and the zombies that all require their own ammo. Ammo is found in abundance in the lower difficulties leading to a lack of need for strict resource management in the limited but expandable inventory size. There are storage boxes littered throughout the games safe areas where items can be stored for later while opening up space in the player inventory for essential items such as green herbs which heal, various grenade types and ammo. Inside these safe areas are also manual save spots though the generous checkpoint system means a missed manual save won’t set the player back very far. 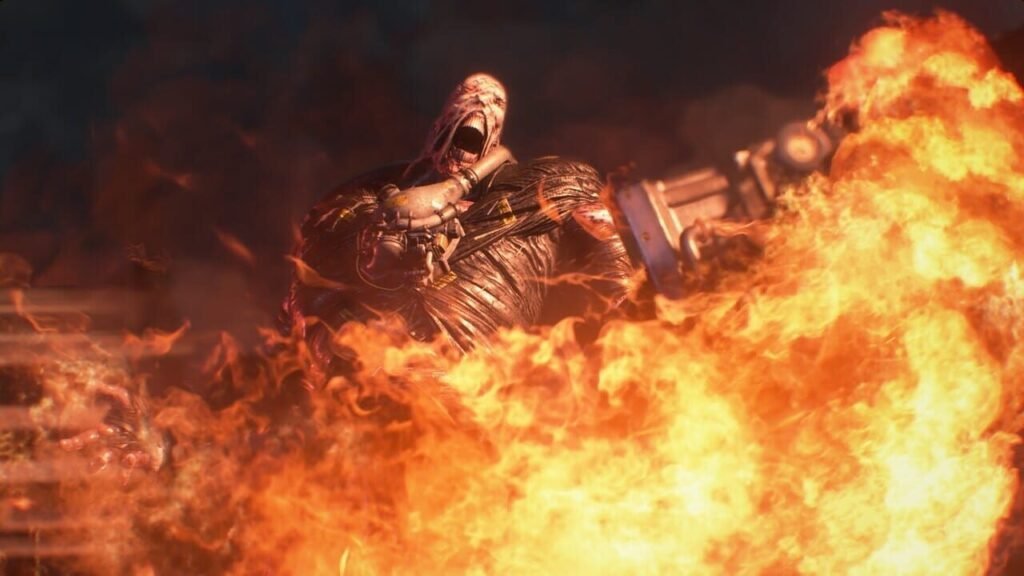 There are a small amount of puzzles to solve that either progress the story or reward the player with items, weapons or collectibles, the latter of which is plenty in the form of magazines and documents for example. These provide additional backstory to the crisis but add little to the overall experience. The puzzles are simple to solve, usually requiring nothing more than the collection of one or a handful of items to be returned to it and put in place. The lack of complexity makes this accessible for players not overly familiar and comfortable with puzzle solving mechanics. Apparently some notable puzzles are missing from the original that community feedback suggest hinder RE3 but for those who haven’t played the original, their experience has just enough puzzles to avoid becoming bothersome.

The enemy variety is limited to about a dozen types, each with varying levels of speed and damage to keep the player on their toes while exploring. Some of the larger enemies can take a fair amount of damage before their defeat but with the arsenal and ammo at Jill and Carlos’ disposal, this is rarely an issue.

The visuals in this game are incredible, the cinematic sequences are without rival. The detail of the character models for Jill, Carlos and Nemesis in particular are truly amazing while the enemy models are little lacking when compared. The lighting and fire effects are stunning and the environment overall feels legitimate, despite the darkness and decay of the apocalypse happening within it. The sound design is on point with satisfying weapon effects, enemy grunts and growls and a score that adds intensity and drama. The voice acting is impeccable too, further immersing the player in the experience and believability of the characters. 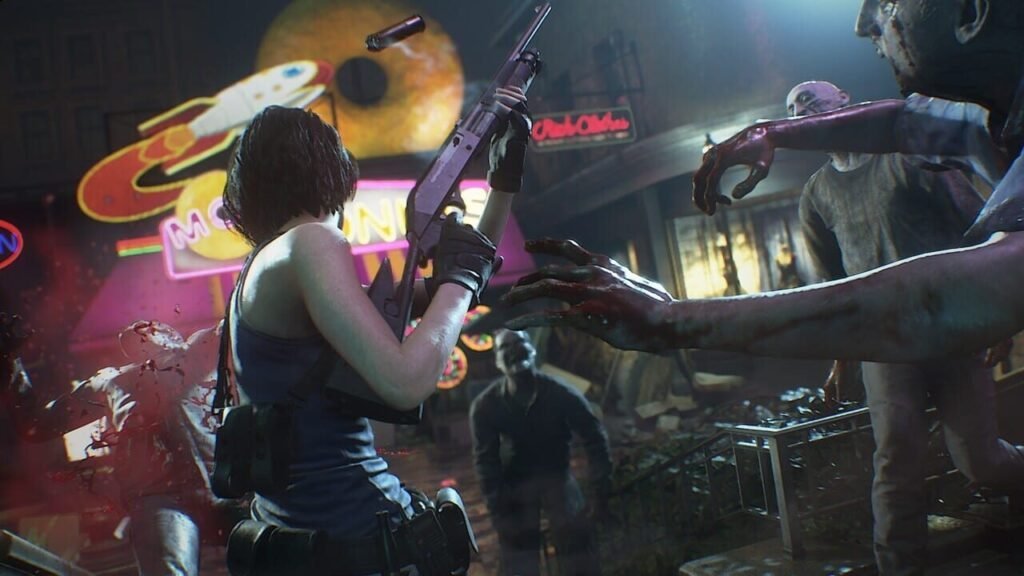 Resident Evil 3 is fun, action packed and short enough to satisfy newcomers but some fans of the franchise may be alienated by omissions from the original that made the game memorable for them when they played it over the last 20 years. Regardless of its comparison to the original, on its own it holds up as its own beast with a pace that rarely waivers, a simple but uncomplicated story and a protagonist that kicks ass.

Included with every purchase of Resident Evil 3 is Resident Evil: Resistance, an asymmetric multiplayer only title that sees players attempt to survive an escape room type experience while a Mastermind antagonist sets traps, obstructs the environment, summons enemies and on occasion takes direct control of enemy characters to kill all 4 of the survivors. As a completely separate game that just happens to be bundled with Resident Evil 3, further thoughts on Resistance will be detailed in its own review which can be found HERE.

+ Jill Valentine is a badass

– Little reason to replay other than higher difficulties