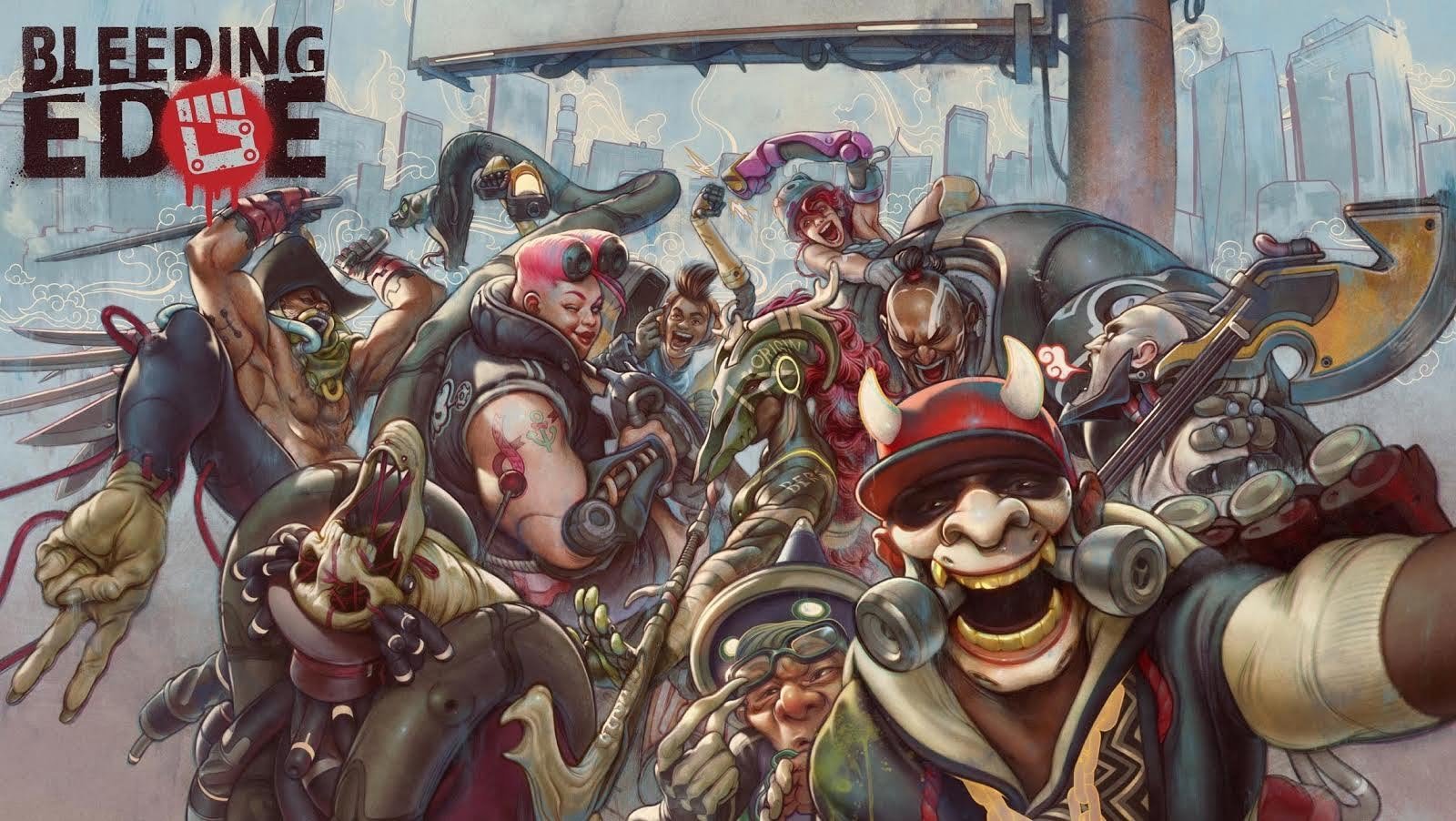 Bleeding Edge is a multiplayer only combat title developed by Ninja Theory exclusively for Xbox and Windows PC and as such it has launched on Xbox Game Pass alongside a digital and physical release. The unique blend of quirky characters and close quarters combat based mayhem compliment the Borderlands–esque cel-shaded like art style in this chaotic 4 versus 4 objective based showdown.

The game immediately launches the player into an optional tutorial that covers all of the core mechanics of the gameplay, objectives and character abilities. Once this has been completed or skipped, the player is presented with the main menu in which there are three main options of use. The “Fight” option will search for a game for the player to join, the “Training” option allows for further tutorials to be played, as well as a Dojo that can be used to practice with the different fighters and the “Workshop” where customisation of the characters appearances, mods and boards takes place. 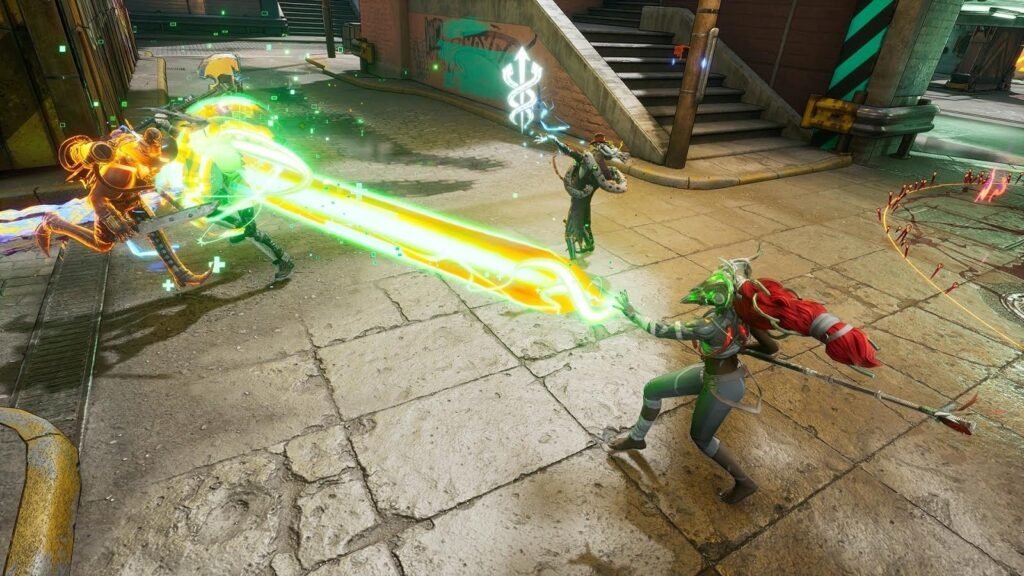 Each of the 11 characters fall into one class, either Damage, Support and Tank. Damage prioritises high damage output, Support allows the ability to heal teammates and Tank that works well to disrupt enemies. Mods can be unlocked via character progression by playing games and purchased using one of the two in-game currencies awarded from gameplay and player progression. These are boosts to the effects of abilities unique to each character and may alter stats such as duration, cool-down, damage and range for example. The Mod system is simple and accessible, well worth investing time into constructing the best builds for the players preferred play style.

A brief bio for each character can also be found in the workshop that provides some insight into their personal backgrounds. As the game lacks any kind of campaign or separate single player content this feels kind of redundant.

At launch, Bleeding Edge only has two game modes, Objective Control and Power Collection with no option to choose which one to play or inclusion of private matches. The lack of variety in game modes, inability to actually choose which of the two available modes is disappointing to say the least. When a game has been filled with two teams of four, each player must choose their character but no two of the same character can be selected on a single team. Once the teams have been assembled, a one-minute waiting period confines the teams behind a barrier where they eagerly await the clock to hit zero and the mayhem can begin. By default players spawn on their boards that makes crossing the map to the objectives a little quicker. Jumping and a dash/boost type move are the only actions that will not dismount the player from the board. Attacking or using an ability will take the player off the board where it can be remounted by holding right on the D-Pad. It really feels like a missed opportunity to have the board serve a more meaningful purpose than to just provide a slight speed boost.

As well as the Mods, Skins and Emotes can be bought and unlocked that offer purely cosmetic changes to appearance or their taunts. Easily the most interesting of the character customisations is the Boards. Each character can have their board customised with unique boards themselves, paint, stickers and trails. These, as with every other customisation item, are unlocked via progression and use of the in-game currencies earned by simply playing. This personalisation goes a long way in giving the player the opportunity to stand out on the battlefield. 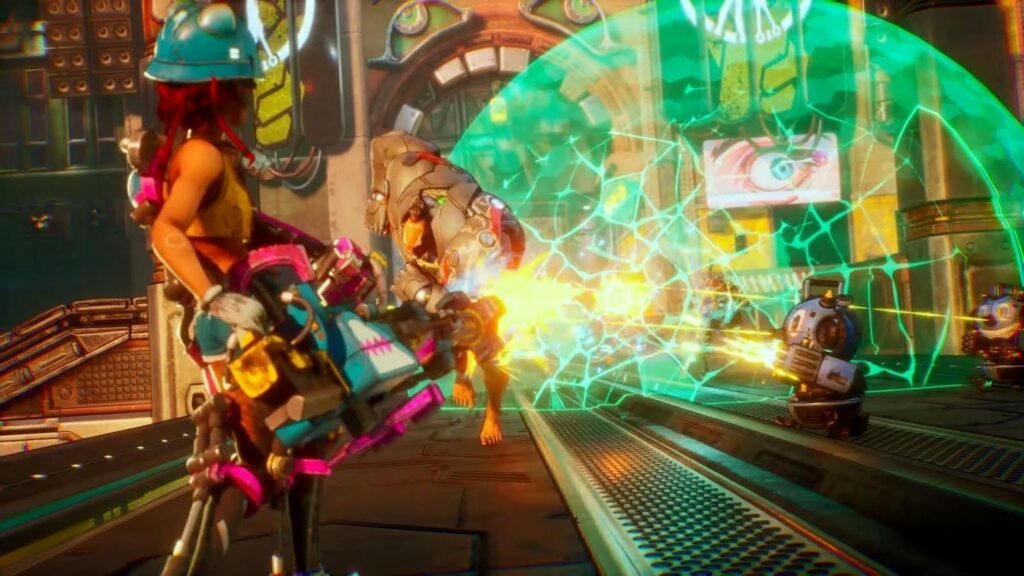 Combat is simple, the X button acts as the singular standard attack while the left trigger is used to lock on to an enemy and Right Bumper, B and Y serve as other abilities unique to each character that typically require a cool-down before they can be reused. Each character also has an ultimate ability activated with Left Bumper that charges slowly over time. Understanding each character’s abilities is critical to being able to effectively play, survive and complete the objectives. Upon death, a fifteen second wait ensues before the player respawns where they also have the opportunity to change their character to one that is not already in play on their team. There are no spawn restrictions so players will continue to respawn after death for the duration of the game.

Both of the game modes are score based. Firstly, Objective Control contains three points that must be activated by standing within a small platform for a few seconds to capture and then subsequently defend from the enemy team. Each second of control translates to 1 point, 600 of which are required to win. The control points are only active for a fixed time before deactivating and a new countdown indicates when they will reactivate as well as where on the map and how many there will be. Initially a singular control point is contested, the next time there will be two and then three, before resetting to one and repeating that cycle. With each control point held adding one point per second, up to three points per second if all are held can significantly speed up the scoring process and instil a sense of urgency.

Power Collection tasks each team with destroying canisters and collecting power cells inside during the collection phase. During this time, any player carrying power cells can be killed and have their stash stolen. This part of the game is chaos, trying to collect as many as possible while defending yourself and the rest of the team can be hectic. After the collection phase, a deposit area will be revealed that must be entered and the player has to remain perfectly still for about five seconds to deposit and add to their teams’ score. Capped at 50, these games can go pretty quickly if effective teamwork occurs. After a predetermined time, the game will return to the collection phase again and repeat the cycle. 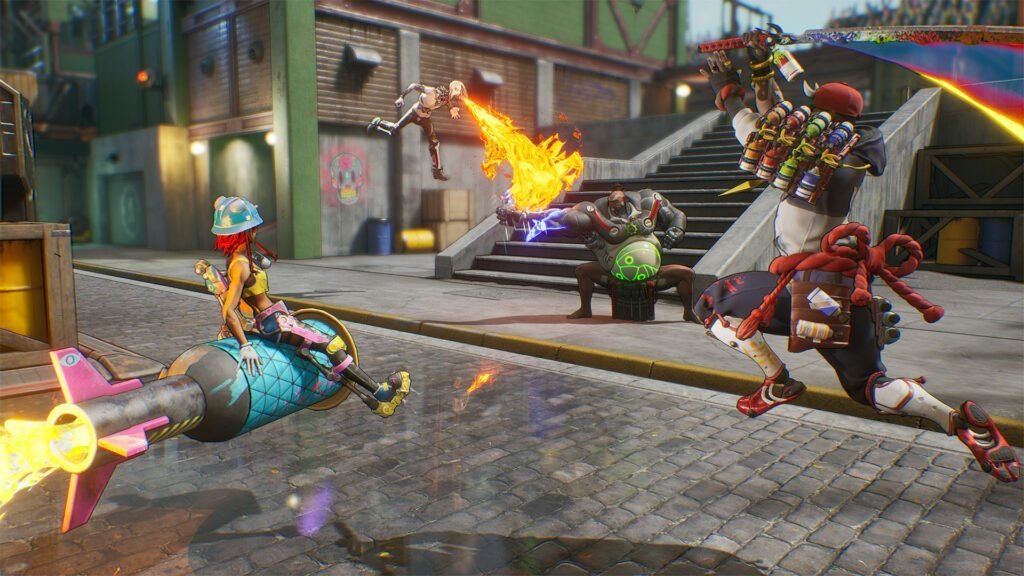 The characters and environments are stylised in a dystopian, grungy, cyberpunk like fashion that gives it a little identity. The banter the characters randomly vocalise is amusing at first but wears thin very quickly to the point of annoyance. The upbeat soundtrack compliments the mayhem well and cleverly makes the pace of the gameplay feel quicker than it actually is.

The overall feeling towards Bleeding Edge is that it is lacking in almost every department. Both of the game modes are fun and chaotic but do not tend to last much longer than approximately ten minutes and the inability to choose which one to play or to be able to play privately hurt the social replayability for those that want to play with a group of more than three friends. A sensation of emptiness fills the experience more than expected in terms of gameplay, game modes and progression. There is fun to be had with Bleeding Edge, hopefully new maps, modes and characters make an appearance down the road to inject more variety and life into an otherwise empty game.