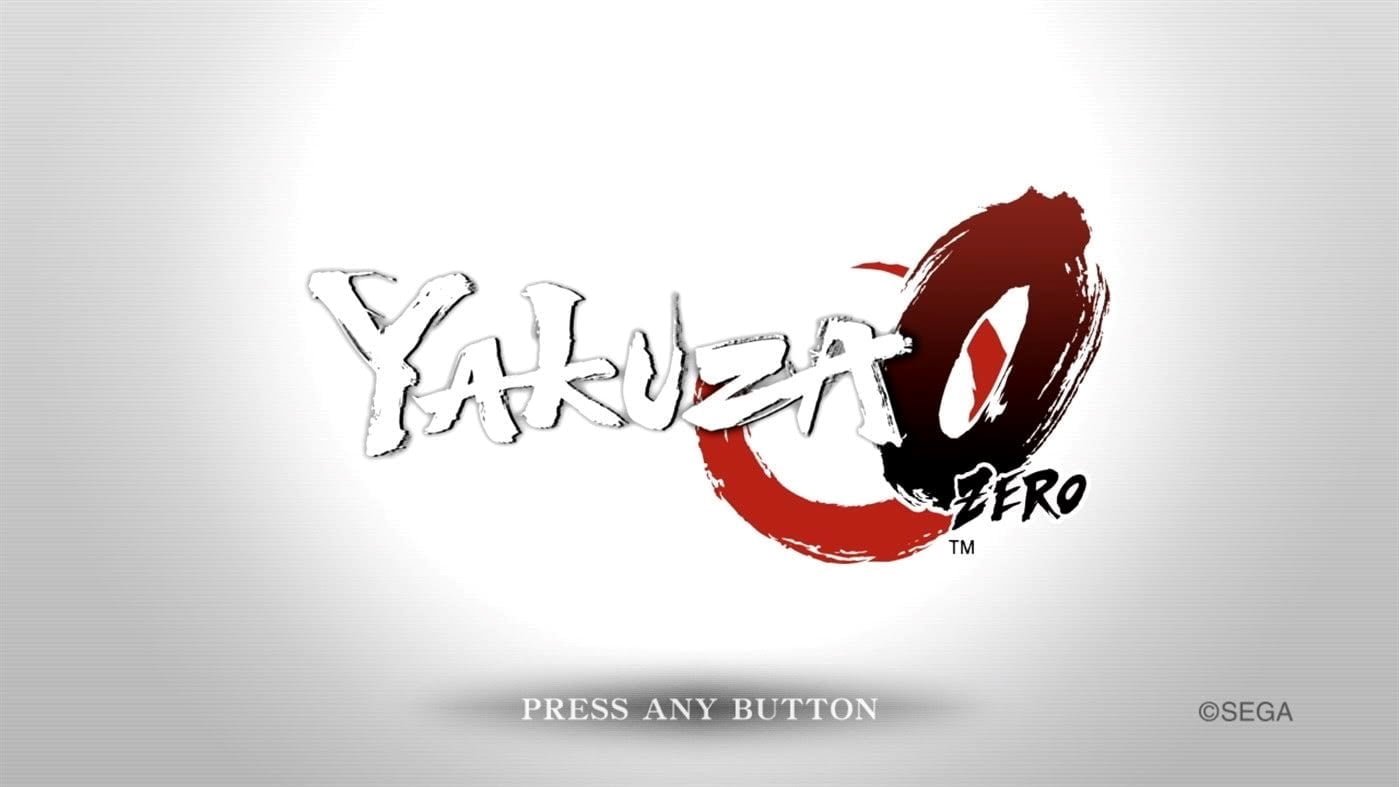 The Yakuza franchise kicked off back in 2005 and for the last 15 years the story driven action series has remained exclusive to PlayStation. Despite being the sixth main entry, Yakuza 0 is a prequel to the original and is the very first to be made available on Xbox.

Themes of betrayal, retribution and honour are the cornerstones of the 17-chapter story that alternates from the perspectives of two protagonists, Kiryu and Majima. Each character has their own story and past that inescapably haunts them but over the course of the 20+ hour story, their narrative cleverly intertwines and influences the events of the other. 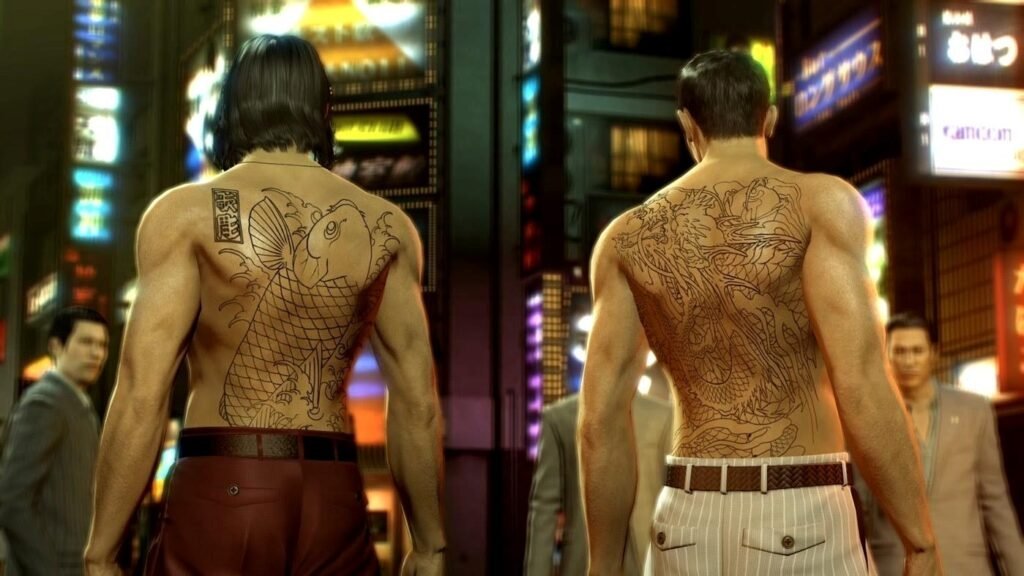 The typical cutscenes interwoven with the gameplay are fairly average, offering typically wooden and almost lifeless animation. Key moments that are sprinkled throughout the narrative are in cinematics that do not use the game engine and it’s these that are incredibly and immaculately detailed, bringing some of the most photo-realistic visuals to this generation of consoles. They are incredibly striking and just for a moment draw the player deeper into the story you would be forgiven for mistaking it for CG animated film.

Varying visual quality of the cutscenes aside, it is their length that is easily the most inconsistent. Some are as short as a minute or so, with most last around three to five minutes, however there are some that hit the ten minute mark, with the longest being over fifteen minutes. This kind of break in the gameplay is fine if justified with story driven content but a significant portion is unnecessary filler that could easily have been trimmed down, resulting in more focused, story projecting sequences. At least ten of my twenty-four hour playthrough was spent watching cinematics.

The gameplay is a blend of walking around a handful of small, semi-open environments interacting with places and characters to further the story, resulting in a large amount of “get from point A to point B” type scenarios that wears thin very quickly. Where the gameplay really steps it up is in the combat. Most encounters are story related and will follow or precede a cutscene but groups of varying enemies labelled as hooligans, delinquents and angry rich men to name a few, will also patrol the streets and chase the player down. If the player is unable to outrun them, enter a building or start a mission before they are approached, a battle will begin. 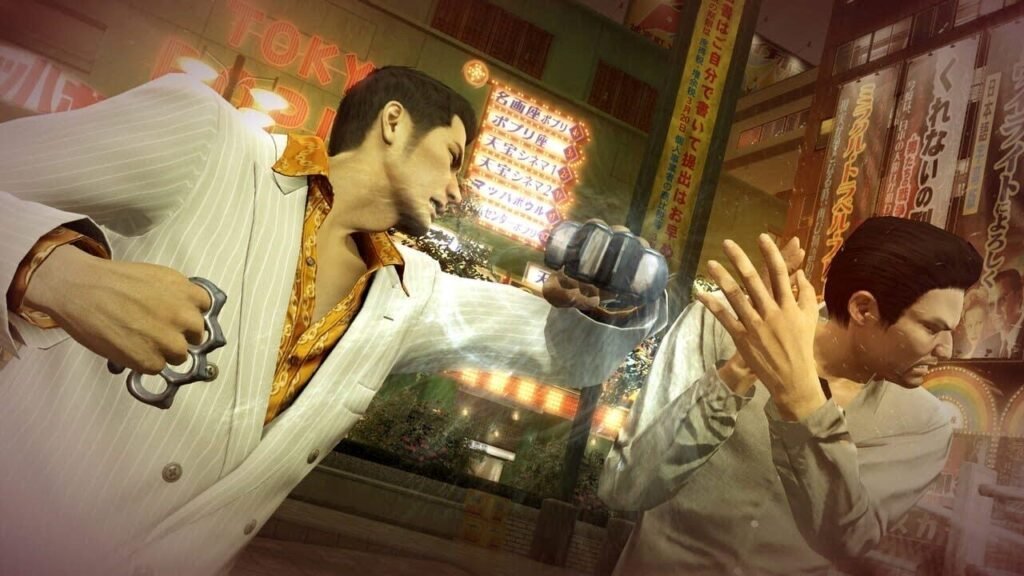 The combat is focused around three unique styles, Kiryu and Majima each have their own trio that can be easily switched via the D-Pad. Each style is visually and statistically different, favouring power, speed or weapons for instance. Combos are strung together via X and Y with the A button used to evade and B to perform a grapple. As the enemy takes damage, a Heat bar fills up to one of three levels, decreasing over time if no attack is made or if damage is taken. Depending on how many bars have been filled, special attacks can be performed that to varying levels of damage. These are stylish, brutal and violent moves that typically deal significant fatal damage. Weapons dropped by enemies or objects in the environment can also be picked up, providing a source of additional damage output that can also be used to trigger Heat moves.

When the player lands any strike on an enemy, money is sent flying, which accumulates throughout the fight and is added to the players wallet. Conditions such as taking no hits, weapon use or multiple enemies attacked at the same time provide additional bonuses. Every strike that hits the player though will result in money lost, requiring the player to be extra alert and aware of their surroundings in order to not just survive the fight but to maximise the profitability of every encounter. Boss battles are expectedly more difficult and the enemy can have several health bars to deplete. Some boss battles will have Quick Time Events (QTEs) or button mash sequences scattered throughout, adding an element of unpredictably but welcome variation to the fights. 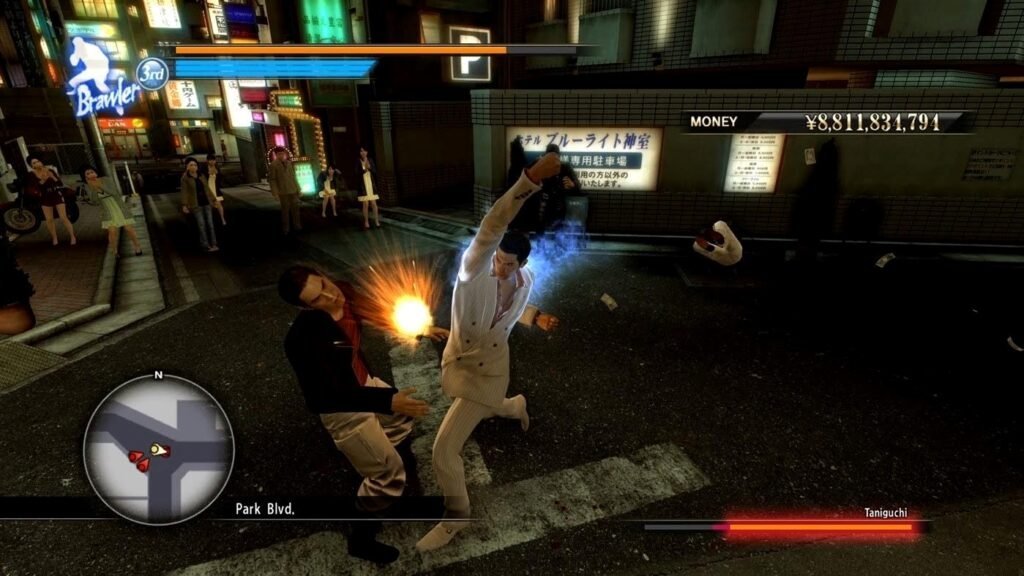 Bordered by inaccessible streets and regardless of which character is being controlled, the player is able to navigate these areas and interact with civilians offering items or an overwhelming amount of sub missions, purchase items and consumables from a variety of stores, play karaoke mini-games where a series of buttons must be pressed in rhythm in the on screen prompts and more.

The sub-missions on offer vary from fetch quests and fights to obscure scenarios, such as providing advice on how a band can adopt a more hardcore presence with their audience, pretending to be a film director attempting to please a producer or finding and beating down a series of thugs who have stolen and passed on a video game from a child. The scenarios are certainly more varied than the actual gameplay loops of the missions, which is a shame as there is certainly potential for a broader assortment of mechanics. A recurring theme in the sub-missions that was not nearly as prevalent in the story, was goofy, cheesy dialogue that oozed from almost every character. Uncharacteristically, both Kiryu and Majima would do or say things that felt completely out of character. This sudden contrast with their personalities felt like it undermined them. 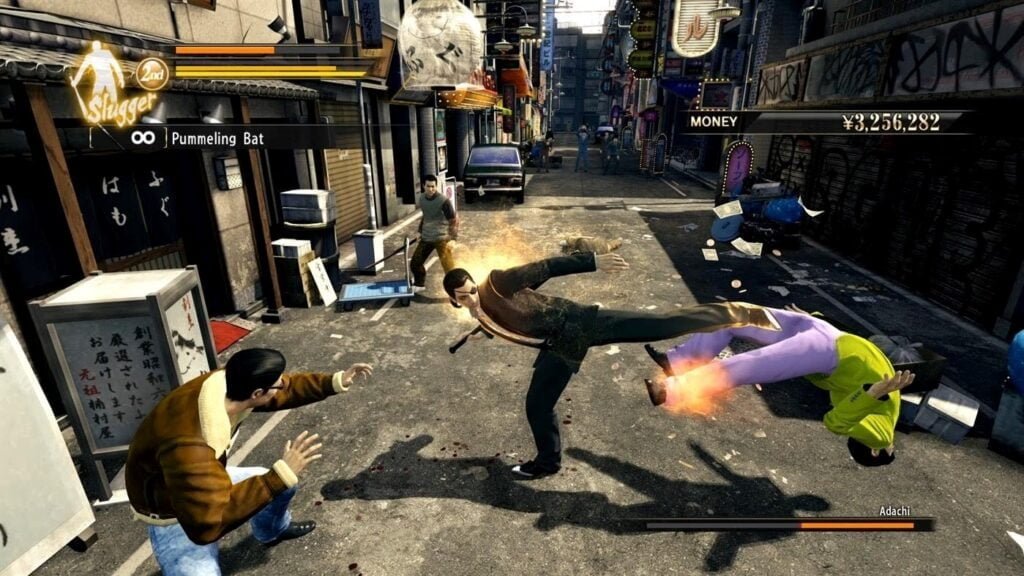 Introduced through the story is the Mr Shakedown enemy type, with each area of both characters’ story home to a few. These enemies are identifiable by a monetary value above their head. They will pursue the player and engage in combat if they are not outrun. Incredibly powerful, Mr Shakedown can wipe the player out in as little as a two or three hits early in the game. Losing to a Mr Shakedown will result in him taking all of the player’s money, but beat him and all of his money is awarded. Finding and beating him after losing to him initially will award all of the money he already had as well as what money he took from the player. When skills have been upgraded, this is hands down one of the quickest and easiest ways to make money. But until appropriately upgraded, Mr Shakedown should be avoided at all costs.

Money can be spent on a rather comprehensive skill tree for each character that can be put into each of their associated styles. For instance, Kiryu’s Beast style or Majima’s Slugger style can have new moves unlocked that can only be executed while they are active. There are also passive abilities that can be purchased such as increasing the characters maximum health that applies regardless of fighting style in combat. The further the skill tree is developed, the more the upgrades cost and the most efficient way to make money is to become proficient in combat. Money can also be spent in stores on consumable items such as health or heat restoring foods, drinks and medication or items that can be equipped on the Inventory menu like weapons or accessories. 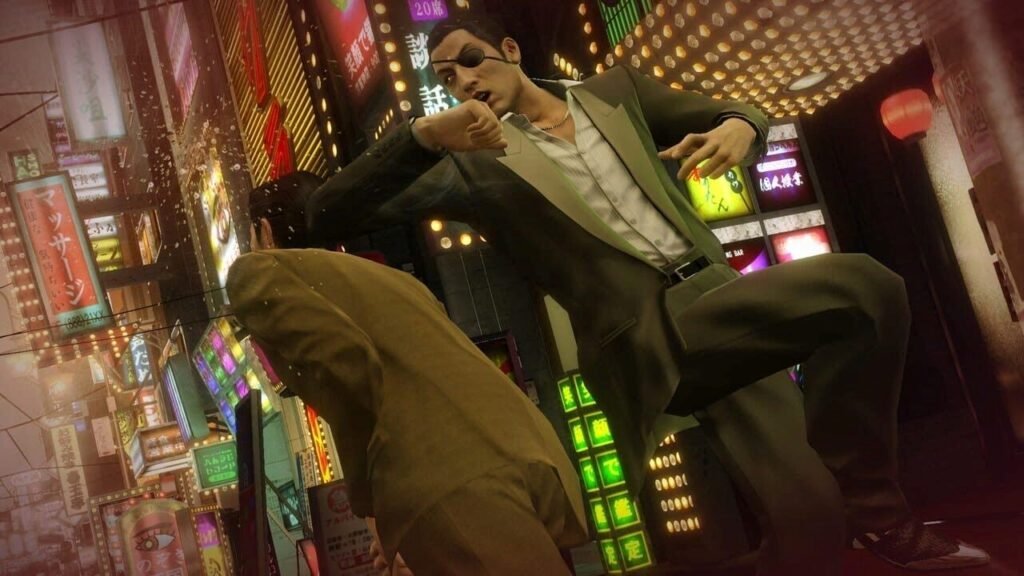 An additional source of income can be obtained through the real estate and Cabernet management systems available to Kiryu and Majima respectively. The real estate is managed by assigning staff to collections and purchasing properties for instance while the Cabernet requires hiring of hostesses to assign to tables as customers are seated. The lack of depth in these systems give a tiring, choresome feel as opposed to a rewarding break from the fist heavy gameplay. While the monetary rewards may be worth the effort, ignoring it outside of the compulsory tutorial sections did not slow progression in my experience.

Upon completion of the story the player is able to start a New Game + and carry over all of their money and upgrades. For completionists, this is excellent but for those looking for more replay value there is little need to run through it again. 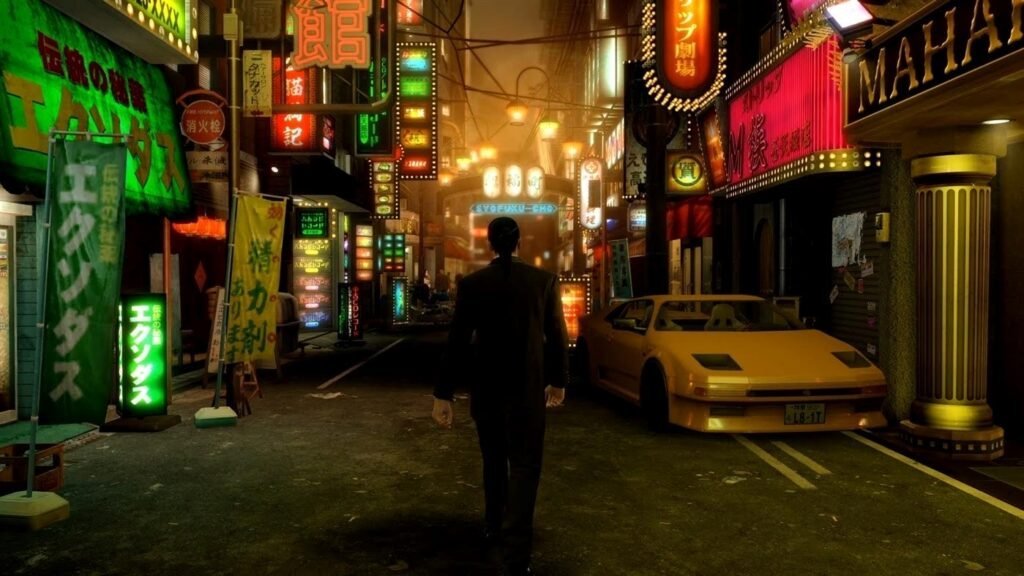 Yakuza 0 blends a fun and dynamic combat system with an emotionally driven narrative from two different perspectives. Unfortunately the secondary content within the game world is a combination of rather meaningless and unnecessary distractions. As the game takes very long to get through it watching all of the cutscenes, the idea of extrapolating that for no particular reason is one that will likely not be pursued by most. The world this title builds is one worth visiting and by being the first Yakuza to release on Xbox, it makes sense to start with the earliest chronological entry in regards to the story. Despite its flaws, this is a solid action title that is worthy of the attention it has received over on the blue brand.

– Most sub-missions out of character for protagonists