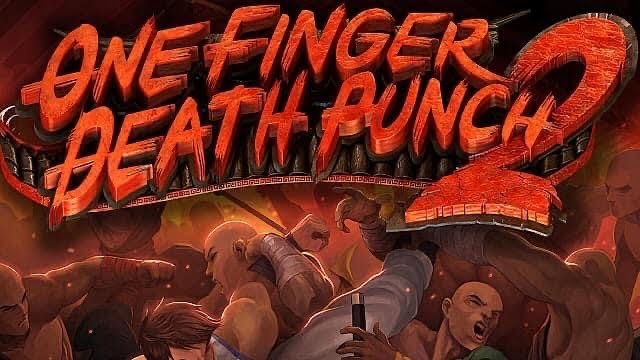 Having released on Steam exclusively last year, Silver Dollar Games’ One Finger Death Punch 2 is the follow-up to the original which released on the previous generation of consoles. Very cleverly titled, this 2D stick fighting title requires the precise timing and execution of single button attacks, either X or B, executing a… One Finger Death Punch… resulting in brutal, gory and violent ends in most cases.

The game opens with a tutorial that educates the player on the games mechanics and there is actually quite a lot to take in. The combat is simple in theory but requires precision response times and careful reading of the field. It is not just enemies that must be defeated but thrown weapons such as daggers, shurikens (ninja stars) and even bullets from pistols and rifles. Enemies or thrown weapons and projectiles coming from the left are attacked, deflected and dodged respectively with X, and with B for the right side of the screen. This is also indicated by a bar at the bottom of the screen that acts as a range meter too. Pressing a button while the threat is not within range will cause a Miss block to fill a Miss bar at the top right of the screen. Missing an attack can leave the player at risk of taking a hit and depending on the type of game mode being played, the hit/health bar can be as little as 5 or as large as 10. The tutorial drums in that this is not a button mashing game and doing so will result in quick defeat. 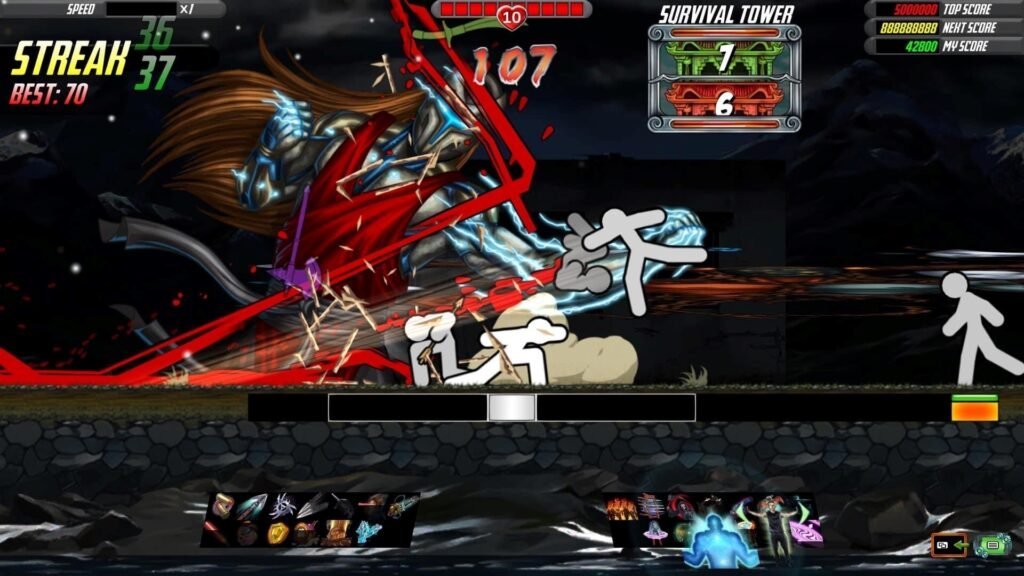 Some enemies will have a yellow block beneath their character which indicates they will switch sides after being hit and others carry weapons which may drop on the field such as swords, axes, chainsaws and power swords, which bare an alarming resemblance to a lightsaber, and may be picked up by pressing the correct button to deal devastating damage. While most enemies are one hit, one kill, some require multiple strikes to defeat as indicated by the number of blue blocks underneath their character. Boss characters require their health bars to be depleted before engaging in a rhythm-attic, almost Guitar Hero-like sequence where the correct corresponding button must be pressed before the bar hits the bottom of the screen. Getting one of these incorrect will lead to the enemy successfully getting a hit in. The gameplay mechanics are certainly layered and require a bit of practice to nail, particularly later in the game as the enemies speed increases.

Other dynamics at play include power struggles, typically with weapons involved where the player must out-button mash the enemy in a tug of war-like sequence until they have dominated the enemy. Additionally, spirit attacks which summon special animated avatars to unleash devastating cinematic attacks and auto-attack sequences where the players character automatically fends off threats from both sides for a short duration. In the middle of some rounds little mini-game rounds take place where the player all of a sudden mounts a horse and must cut down their enemies without missing or running across the screen and punching enemies down to name a few before the combat returns to its normal routine. 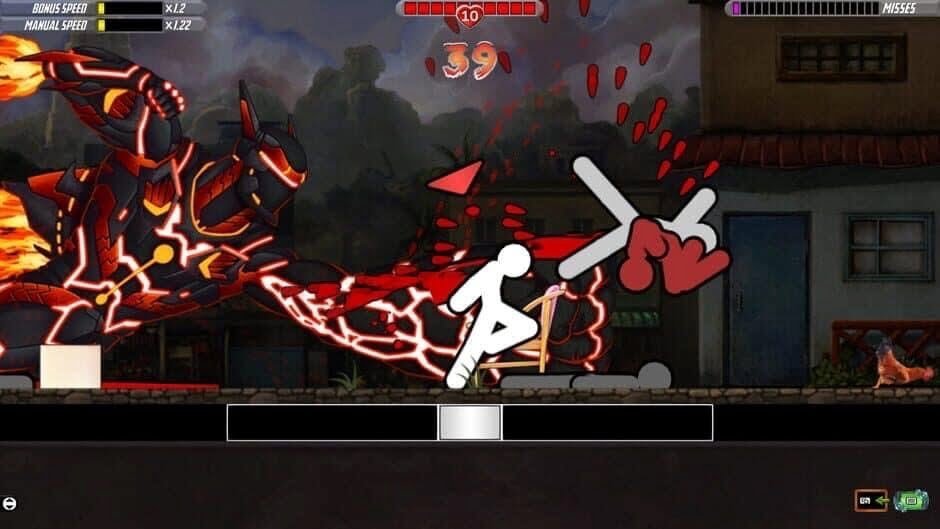 Special skills can be unlocked through a fairly comprehensive skill tree in the Levels game mode, which is the primary mode, to eliminate all enemies on either one or both sides with a single attack, summon weapons and more, filling up through successful attacks before their automatic use. These skills are unlocked in gate rounds with a pink orb icon in front of it. Revenge Tokens can also be found in certain gate rounds as depicted by a yellow token. These can be used when the player has been defeated and allows them to restart the round with a regenerating health bar, useful in the later rounds that are significantly longer and more difficult.

While there is no story mode, there are a number of others on offer to satisfy any urges of thumb flexing executions. The primary mode is called Levels, and is broken up into 8 worlds, each containing 20+ gates which act as the battles. The battles are not all the same, for instance, the most common is called Mob Round which contains a varying number of enemies to defeat. Other gates may have other special requirement rounds such as instant fail if a single attack is missed, dodging throwing weapons instead of actually fighting enemies, environmental kills only, weapons only and many more. The further the player progresses, the longer the rounds become and at times they feel like they start to drag their feet a little. 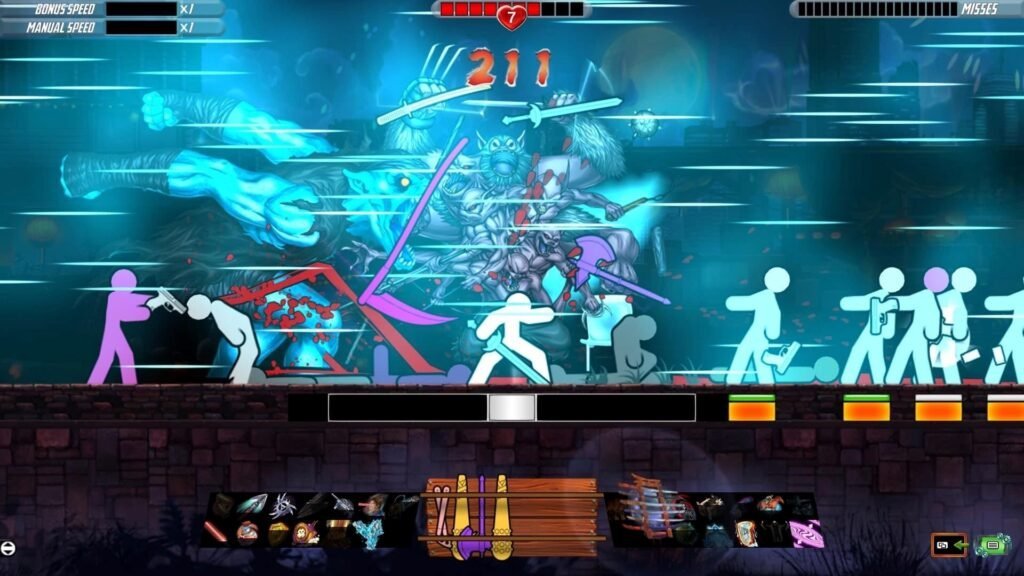 In addition to the Levels mode, there is a Survival mode which is tier based and each of the 10 tiers are very long and increasingly difficult. Failing a tier will allow you to start from the most recent instead of having to start over which is very good considering the pace and precision required. An additional Survival mode features a black cat named Luca that annoyingly but intentionally blocks a portion of the screen is a fun challenge too and a Gauntlet mode laid out like a game board with various types of rounds the player can choose to tackle. There is also a couch co-op survival mode that requires two players taking turns and essentially tagging in and out to allow the sidelined player to regenerate health.

Visually it is very simplistic while remaining detailed with its gore and over the top physics. The environments look great and the overall hand-drawn style certainly works given the stick nature of the characters. The score ranges from electro and upbeat to heavy rock type music, all of which work in the fast paced nature of the gameplay. The sound effects are great too and the weapons sound appropriately lethal. 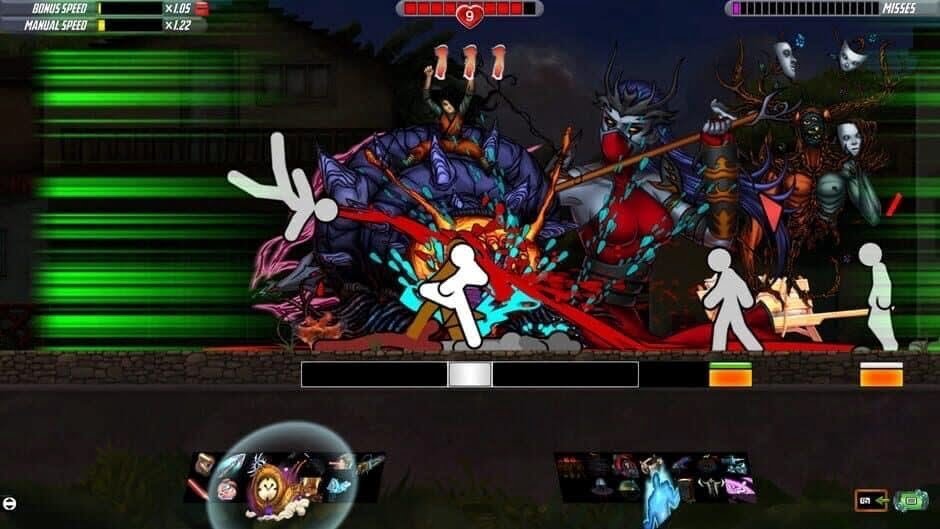 The ability to pause at any time is great and comes in handy in some of the later rounds where countless threats are approaching from both sides. The over the top violence makes this a title best played without the kids around as decapitation and screen covering blood splatter still comes across a little hardcore even on stick figures. 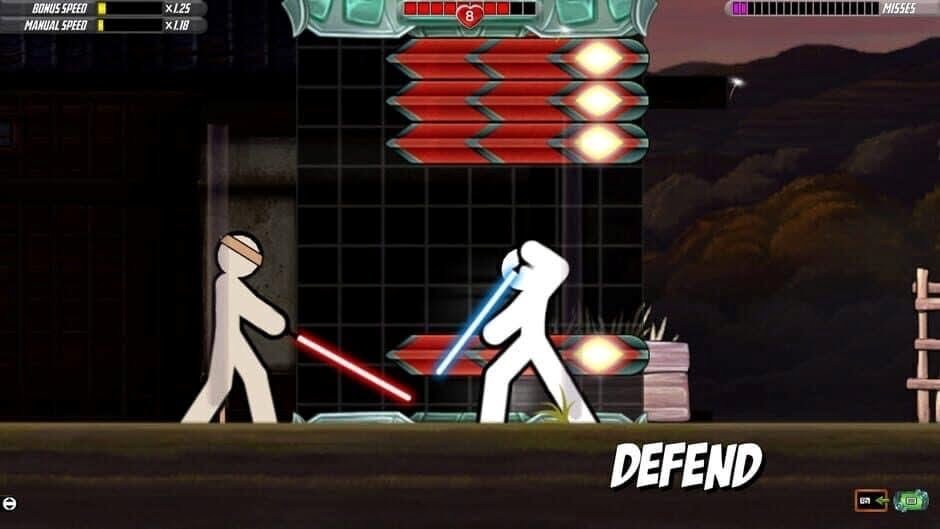 One Finger Death Punch 2 is an over the top, violent and entertaining stick fighter with a variety of modes to keep the players reflexes in top form in addictive fashion. Repetition does rear its head if played in larger sessions but tackling the game in smaller doses remains satisfying. The simplified single button attack mechanic, while accessible, does lack a little depth that may move this fighter into next level territory but with a name like One Finger Death Punch, it works. If you enjoy brutal mayhem conducted between stick fighters, there is a surprising amount of fun to be had here.

+ Layered and in depth gameplay mechanics

+ Number of modes to test your reflexes

– Repetition kicks in with progression

*A review code was provided by the Developer/Publisher for the purpose of this review.*

The Last Kids on Earth and the Staff of Doom Review