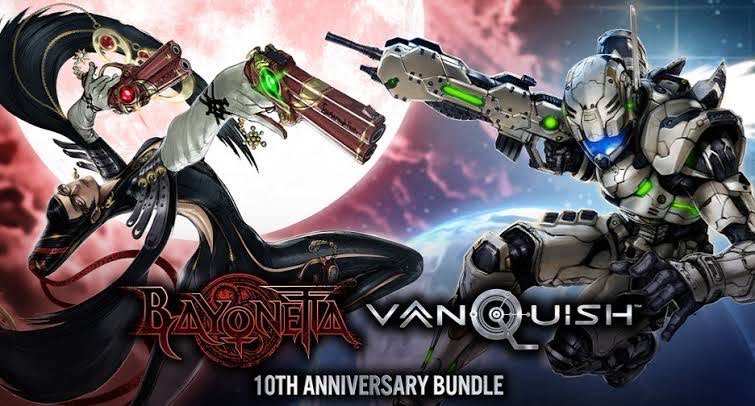 It’s been 10 long years since PlatinumGames Inc.’s Bayonetta first graced the previous generation of consoles as somewhat of a cult classic. With a fresh coat of paint and technical improvements, Bayonetta is back and better than ever.

An action-adventure hack and slash that oozes sexuality of its eponymous protagonist, Bayonetta, who is just as beautiful and stylish as she is brutal and violent. Throughout the 10-12 hour story, players can expect to defeat angelic enemies with flair, an accessible combat system and see a lot of her “assets” while doing so.

Set in Vigrid, a fictional European city, Bayonetta awakens from a 500-year slumber unaware of where, who or what she is. As the narrative and her memory unfolds, players are introduced to new combat and gameplay mechanics, ultimately controlling this shape shifting, gun toting and blade wielding Umbran witch with magical abilities. Bayonetta is pivotal to maintaining the world balance of darkness, represented by the Umbra Witches of which she is aligned and light, represented by the Lumen Sages. Bayonetta’s journey of rediscovery and restoration of divine balance after the mysterious disappearance of both factions half a millennium ago takes her and the player through both angelic and demonic realms, each artistically brought to life through excellent environmental detail and appropriately diverse enemy design. 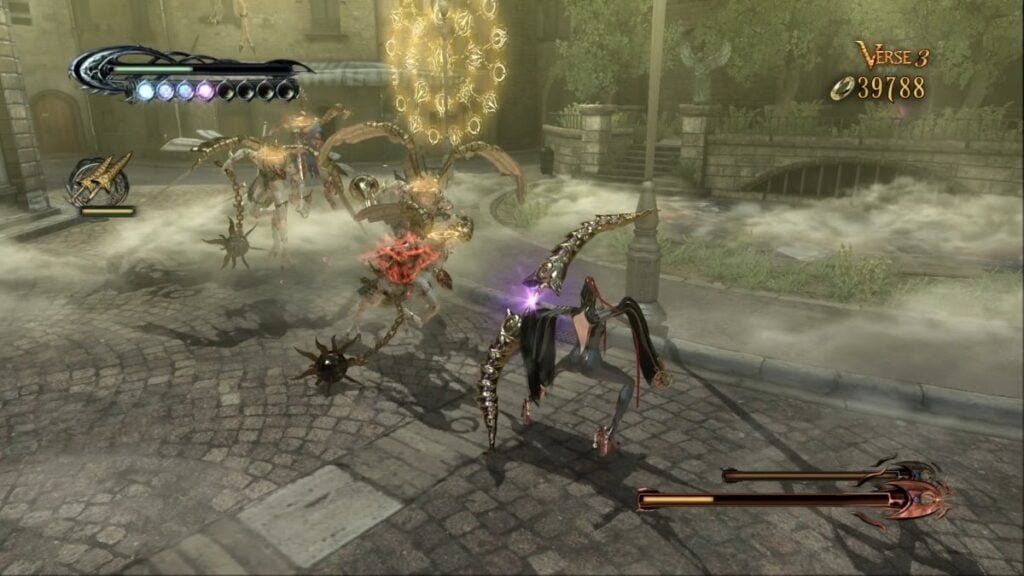 A blend of melee and shooting mechanics allow for a wide array of combos for Bayonetta to unleash. Uninterrupted combos fill a magic bar that once complete can be used to trigger Quick Time Event (QTE) sequences where the player must press certain buttons, as per on screen prompts, to deliver some satisfyingly brutal and gory torture attacks and executions. The magical abilities that can be used are, no pun intended, tied to Bayonetta’s incredibly long jet-black hair that form creatures and limbs that deal significant damage.

The combat is very artistic with its design so cleverly entwined with her body. Bayonetta is able to preserve her combo by balancing short and long range attacks, as well as precision dodging which actives Witch Time, slowing down time for a short duration allowing for massive damage output before the enemy has the chance to react. Combat is rarely one on one with the exception of some boss battles, so successful use of Witch Time is essential to clear the area of all enemies before the magical barrier can be destroyed by a kiss from Bayonetta and allowing progression to the next area. Every battle and chapter awards the player a score and medal based on time taken, items used, number of deaths and damage taken and rewards the player with Halos. 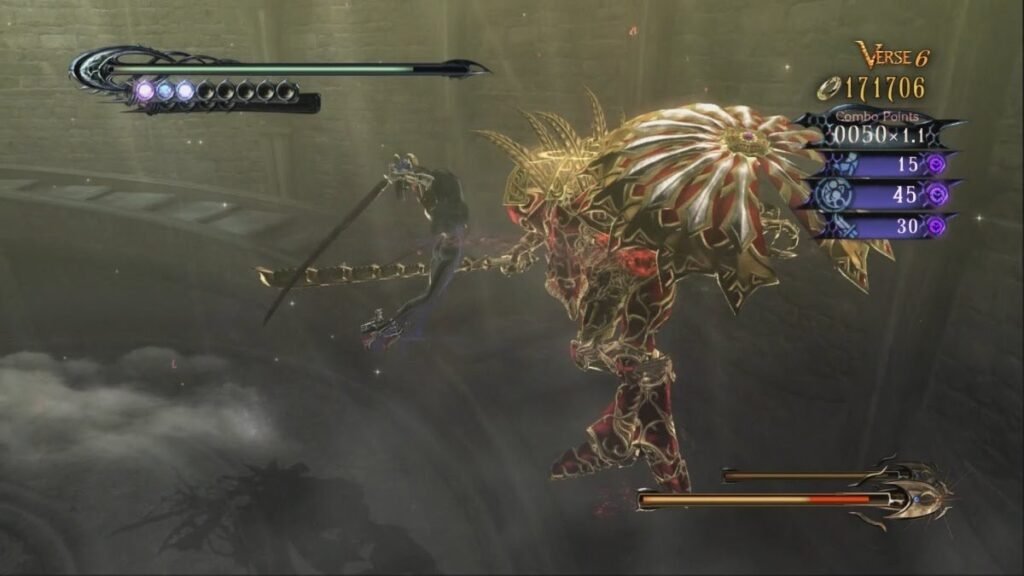 Defeating enemies rewards the player with Halos which can be spent at the in-game store, located in the Gates of Hell at various locations throughout the games 16 chapters and also accessible from the save screen between chapters. These Halos can be spent on new abilities, techniques, weapons, outfits and items for health and magic restoration as well as temporary attack and defence boosting consumables to name a few. Majority of the consumable items that can be bought here can also be crafted, or concocted as it is referred to, by collecting varying amounts of three coloured components found by smashing objects in the environment.

In moonlit sections of the game, Bayonetta is able to Witch Walk, allowing her to jump to walls that can then be traversed. This reality bending mechanic takes a little getting used to, particularly with combat where enemies either move from one wall to the next or are present on more than one at a time, especially boss battles. Yet another layer of creativity to make the gameplay more unique and challenging, this world is one that pushes boundaries in all aspects of its gameplay that consistently leads to satisfying results when mastered. 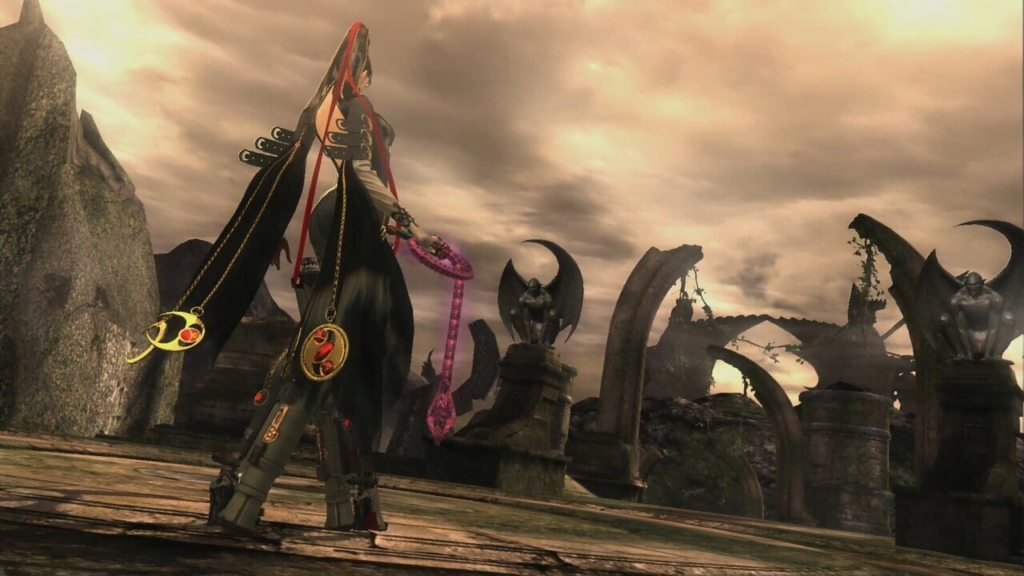 Unlocking some abilities later in the game allow for transformation into a panther, crow and bats, each opening up new traversal, combat and puzzle solving options. Featuring light puzzles throughout, usually requiring use of Witch Time to traverse, they are not overly complicated or excessively used and actually welcome a nice breath of fresh air in between the relentless and frantic combat.

Some of the boss battles can be punishing, requiring careful observation of attack patterns and environmental changes. Death through trial and error in Bayonetta is something that most players will experience a lot. Frustration soon turns to satisfaction when these encounters are completed and lend to making future battles less challenging as the lessons learned previously eliminate a lot of the trial and error aspect. Later boss battles have several health bars so inventory management will play a massive part, ensuring several health items are stored in particular to avoid having to replay the battles from where they auto-saved last. 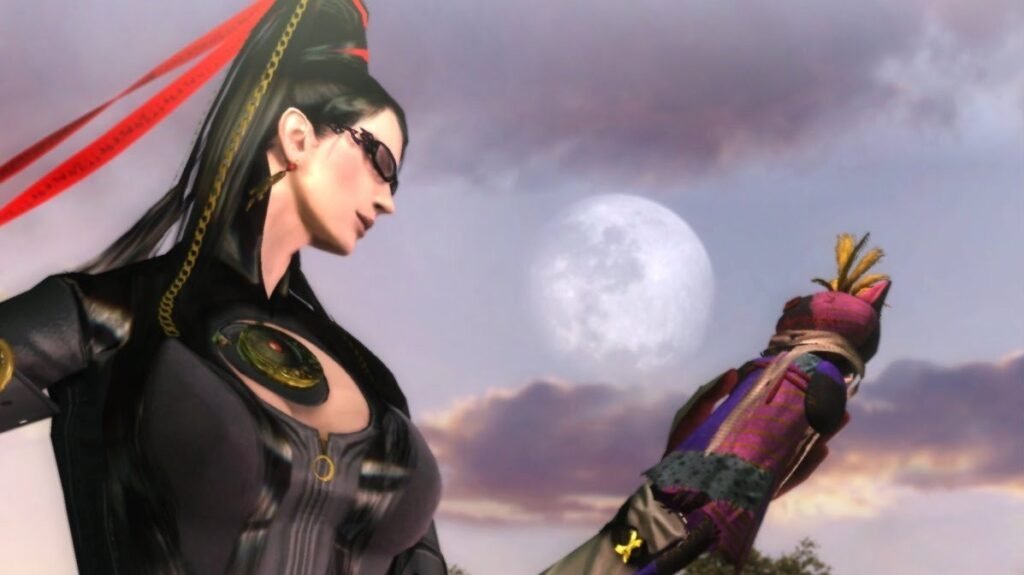 Narratively, Bayonetta asks a lot of the player in terms of paying close attention to and understanding the divine backstory that drives the present motivations of all parties. Some of the cut-scenes are fully animated while others are static but use various tracking shots to breathe life into them. It is a fairly complicated plot but one that resolves with satisfaction and is ultimately enjoyable.

Bayonetta may have released a decade ago but with its upgrade for this release it does not feel out of place among majority or current releases. With a soundtrack ranging from upbeat, to divine and hellish, style is certainly a word that sums up the game overall. There is more to Bayonetta than her appearance lets on and on several occasions all but lets out, and it is her personality and charm that carry this title and its legacy into the future as one worthy of attention.

– Story is a little complicated at times

– Difficulty is brutal, particularly on Hard