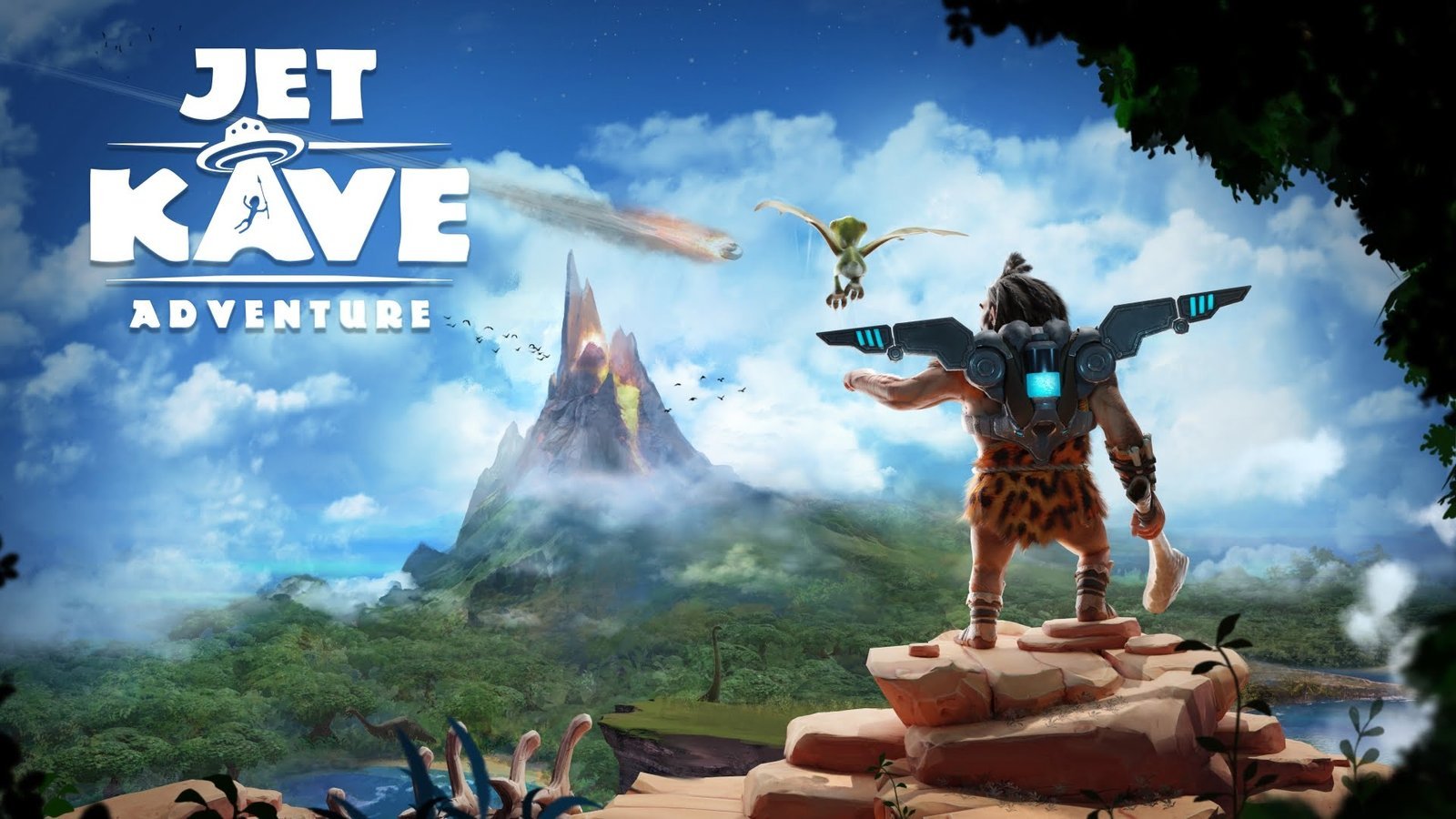 Jet Kave Adventure is a 2.5D side-scrolling platformer featuring a primitive caveman and his shiny new jetpack acquired from an alien. That’s an interesting premise but developer 7LEVELS takes it one step further, adding dinosaurs into the mix in perhaps the first title to bring aliens and dinosaurs into the era of primitive man. With charming visuals and fun gameplay, the adventure of Kave is as weird and wonderful as one would expect from this collision of history and fantasy.

Exiled by his tribe for his failures as their chief, Kave happens across a crashed spaceship and its lone inhabitant. After a brief encounter, Kave equips a fallen jetpack and sets out on an adventure to chase down the robotic alien which was en route to a volcano in the distance. This jetpack is vital to Kave’s traversal of the dangerous terrain, requiring it to not just reach higher plateaus but to avoid environmental hazards and falls as well as the abundance of dangerous wildlife. 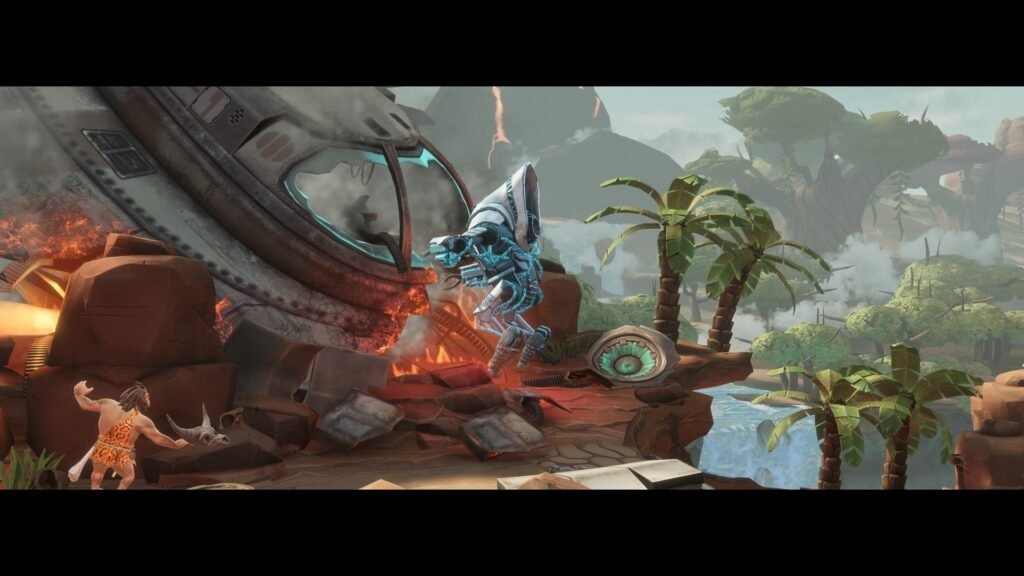 Kave is only able to use the jetpack in small bursts before a brief recharge is required, able to hover for a few seconds or expend more of that energy to dash in any direction very quickly. This dash can be used to pass through otherwise harmful obstacles such as flames, poisonous gases and even enemies for example, eliminating them as he passes through them. Each of the 36 levels contain rock walls that can only be destroyed by this dash and the latter half of the game in particular has sign-like levers that can only be activated by dashing through them, opening passages in order to progress. As well as the natural recharge of the jetpack it can also be refilled by collecting purple canisters though this is limited only to sections of the level that require continuous use of the jetpack to navigate the deadly terrain. 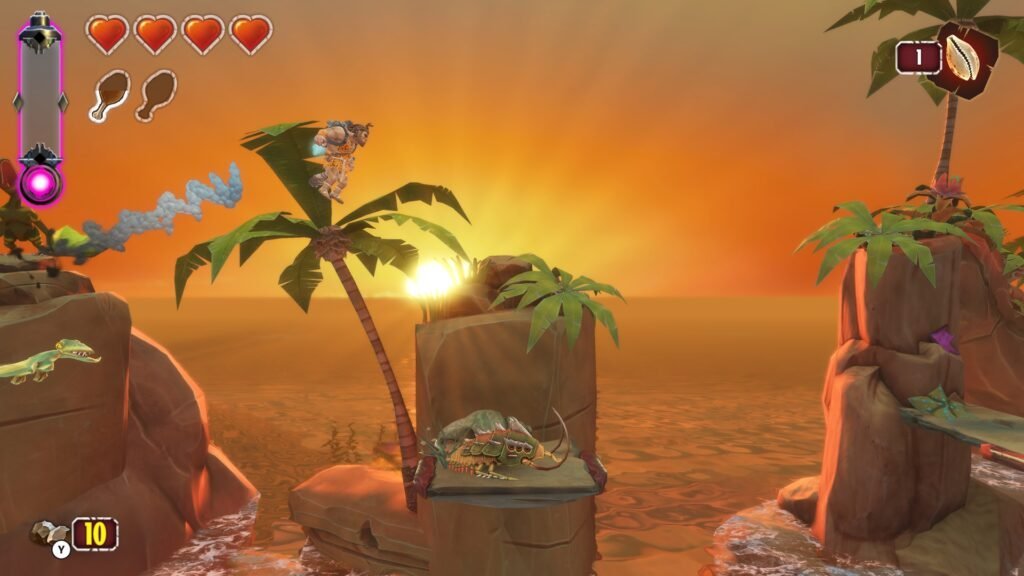 The newfound agility courtesy of this jetpack, which must undoubtedly blow Kave’s tiny mind, is complimented by simplistic combat. Armed with his trusty club and a slingshot that is acquired very early, Kave is able to club and shoot his enemies with stones. Jet Kave Adventure is broken into 4 sections with each comprised of 9 levels. These 4 sections contain some enemies that are unique to them only based on their geography while some are persistent throughout. The diverse enemy variety are all easily clubbed or shot with all but a select few succumbing to a single hit. Flying enemies will swoop at Kave while grounded enemies will spit acid and shoot spikes for instance while also damaging Kave upon physical contact. Combat itself is simple, using the pair of designated buttons for the club and slingshot but it’s the incorporation of the jetpack and the players environmental awareness that introduces what little complexity there is to the gameplay overall. 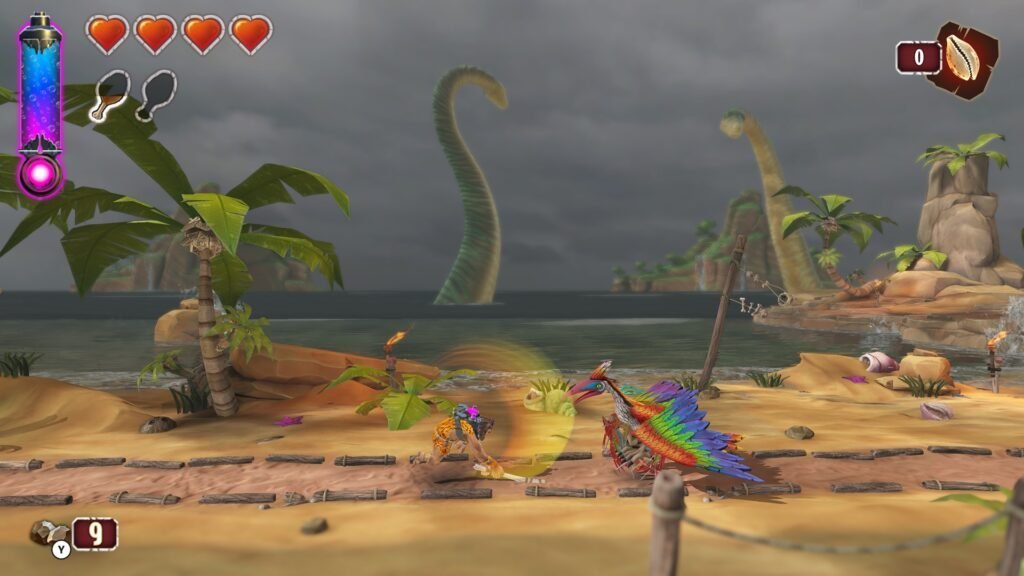 Throughout each level are Shells which can be collected and spent in Era’s shop, accessible only from the level select screen. These Shells can be spent on various upgrades for the jetpack, club, slingshot capacity, maximum health increase, food storage capacity and stones for the slingshot. These start off at 100 Shells per upgrade but increase gradually as they are leveled up. This offering is just enough to make them worthwhile though they don’t influence the gameplay dramatically and players will be able to comfortably play through without purchasing many, if any at all. 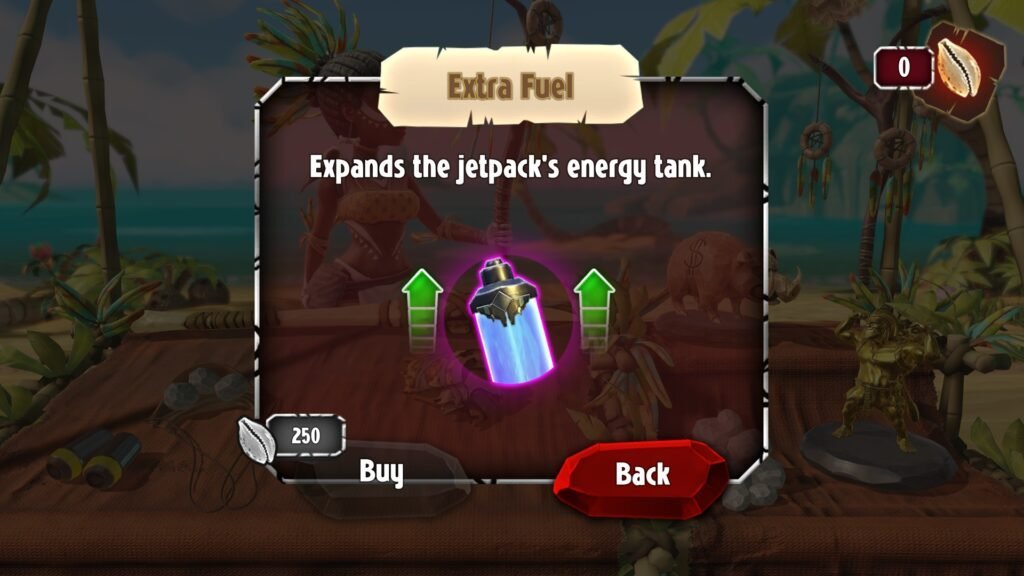 As well as the Shells, food can be found or obtained from defeated enemies that are visually identified on screen by a meat on a bone icon beneath the players life, represented by hearts. Once a player loses all of their hearts they will be returned to the most recent checkpoint. A heart is lost when Kave sustains any type of damage. The only way these hearts can be replaced is by eating the collected food to convert it into a heart. Initially there is only capacity for two food items to be converted though this can be upgraded to five. This system seems to encourage players to eliminate the enemy animals and dinosaurs instead of avoiding them by rewarding the player with an extra lifeline. 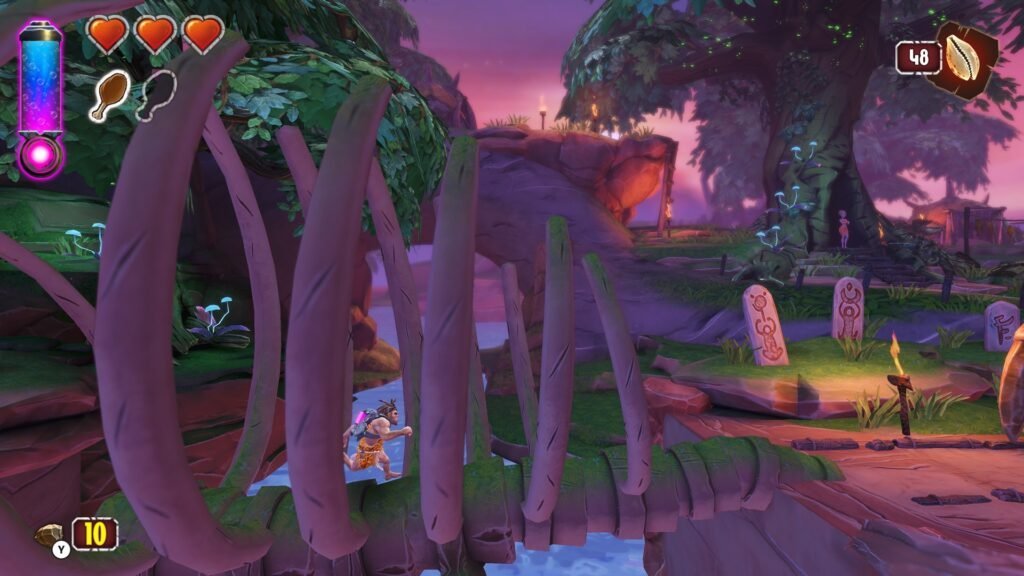 A handful of sequences are present throughout the adventure that puts Kave in a glider to simply move up and down to avoid environmental hazards while using the jetpack to apply brief boosts. Using the jetpack is the only way to fly upwards and it must be used sparingly until a purple jetpack fuel canister can be collected or else Kave will crash, resetting him with each heart lost to his immediate location and to the nearest checkpoint if all hearts are lost. These sequences are fun initially though the novelty wears thing rather quickly and I attribute this to the awkward controls. For some reason up and down is controlled by flicking the thumb stick left and right, it doesn’t feel comfortable and in turn hinders the experience. 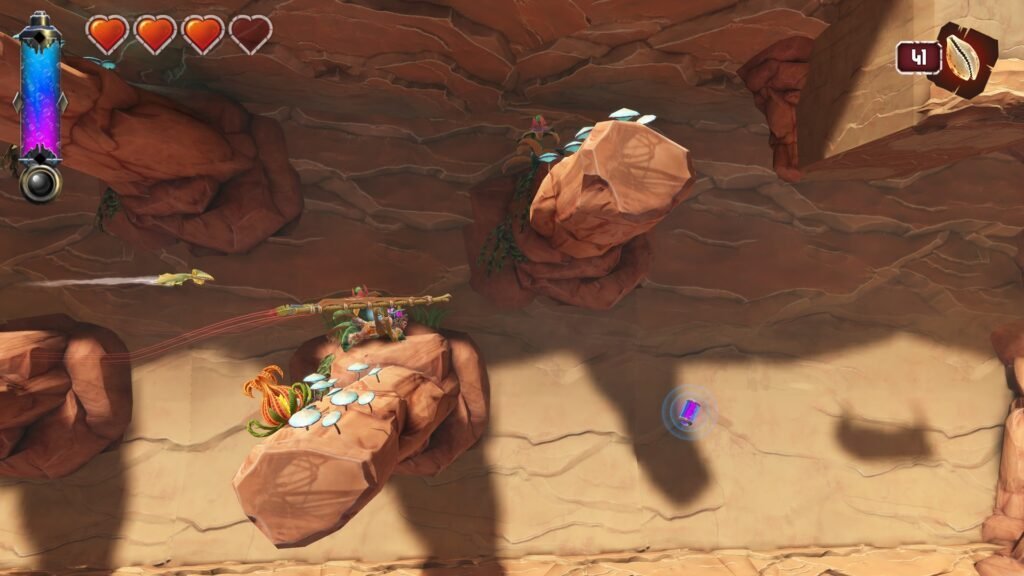 Other elements such as chase sequences keep the gameplay fresh and what I refer to as jetpack flight sequences are particularly enjoyable. In these sequences, Kave finds an orange canister that seems to afford unlimited jet fuel and requires the player to navigate vertically while avoiding enemies and hazards. These are typically fast paced and certainly enjoyable. 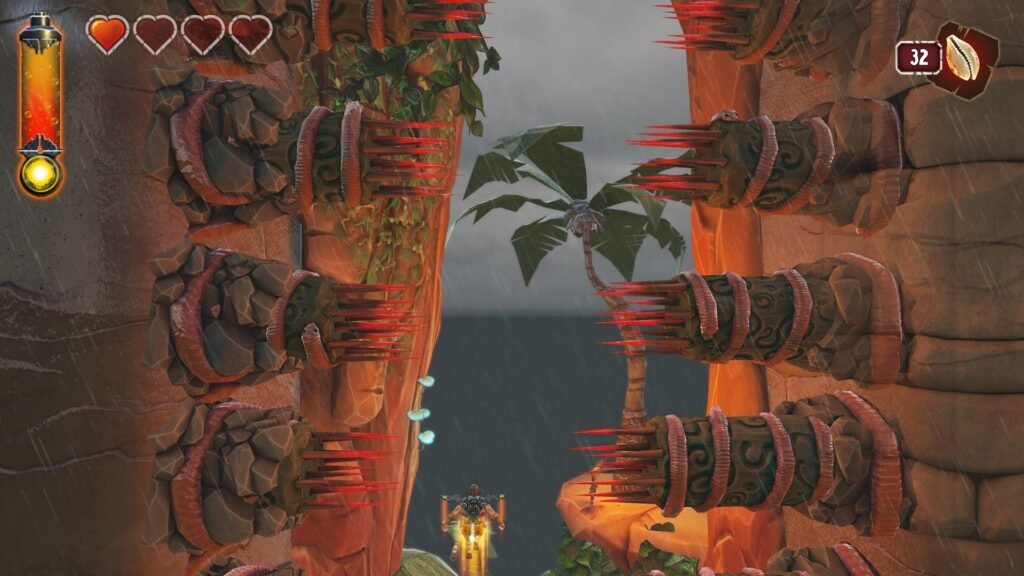 Rounding out the different gameplay elements are fun boss battles. None of these are simple situations of attack a boss to deplete their health as fast as possible but rather task the player with observing the enemy patterns and avoiding them until they leave themselves exposed for a singular attack. This sequence is repeated until each of the enemy’s health icons are depleted though the difficulty and the enemy’s movements and attacks do get more aggressive with each one lost. All of the boss battles are relatively easy and avoid becoming stale or repetitive by each being completely different in terms of strategy. 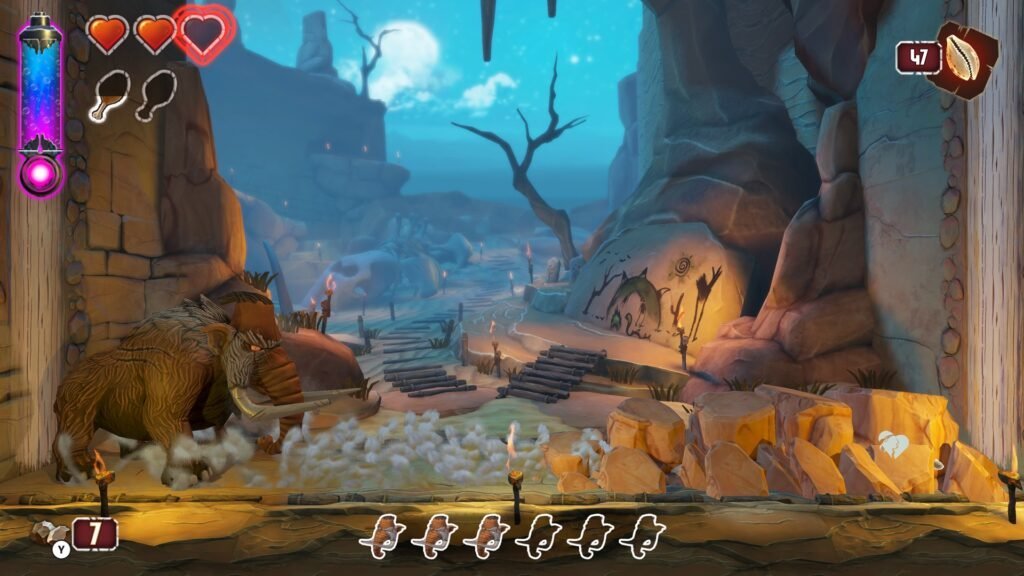 Jet Kave Adventure isn’t particularly difficult and while that does make it more accessible to younger players, there is no alternative mode immediately available for more experienced platform players that may be looking for a more challenging experience. Upon completion of the story mode and the 36 levels that comprise it, which can take as little as 3 hours, an Arcade Mode is unlocked that does cater to these players. Offering a more traditional experience by providing only a limited number of lives which can only be replenished by purchasing them between levels with collected Shells. Once all lives are lost the game is over and the player must restart. 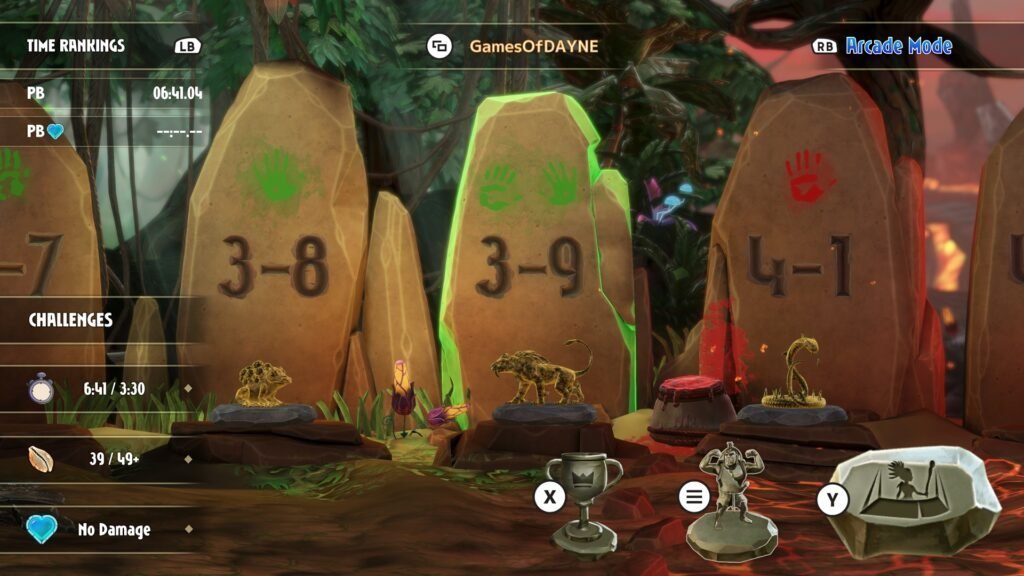 Once a level has been completed once it can be replayed, allowing the player to farm Shells for upgrades, find the single collectible trophy, complete while taking no damage or complete it within a specified time limit. For completionists and players that like to get the most out of their games this replayability is competent, especially with the added challenge of playing in Arcade Mode. Players that want more in return for the time replaying a game will be left wanting as there are no features such as leaderboards to encourage friendly competition or co-operative play or multiplayer of any type. 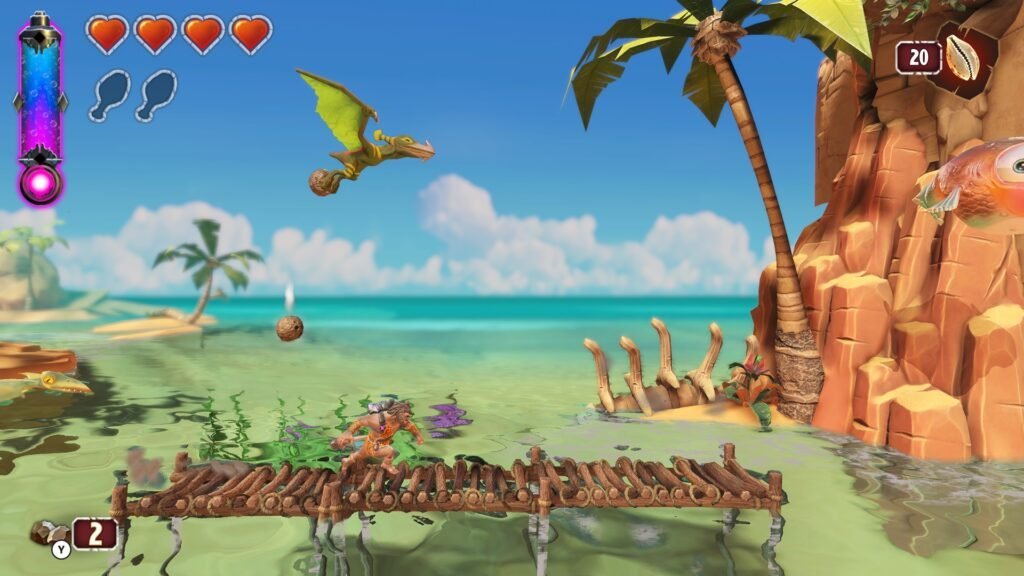 The playful art design is joyful, offering vibrant environments, fun enemy designs and a lighthearted tone and energy. Accompanied by simple sound effects and an energetic score, the overall presentation of Jet Kave Adventure is charming. 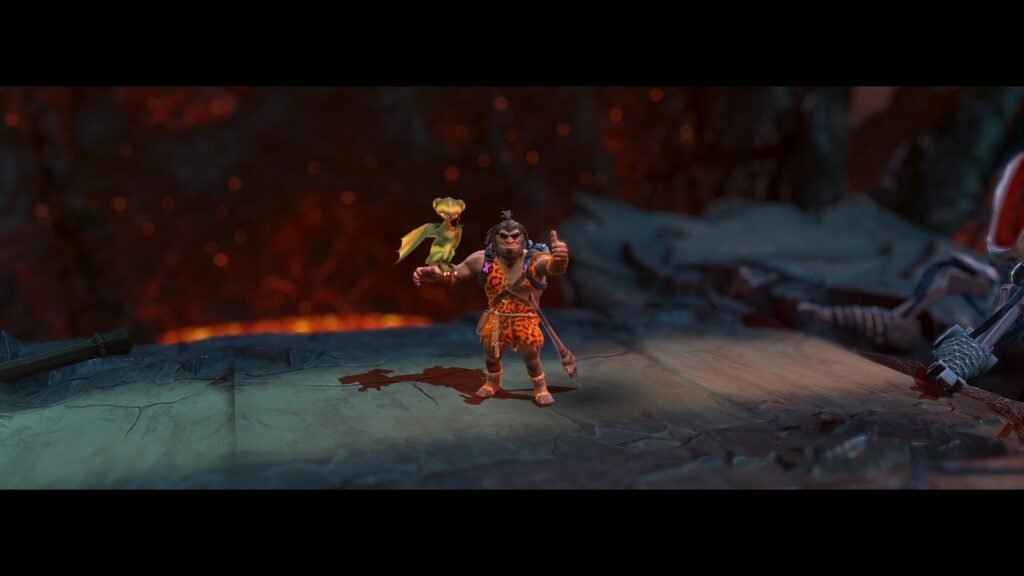 Originally launching on Nintendo Switch in September 2019, Jet Kave Adventure is an enjoyable casual experience that, despite the inclusion of the Arcade Mode post-story, lacks in the challenge department and the absence of more meaningful content to justify replaying the levels leaves little reason to return. 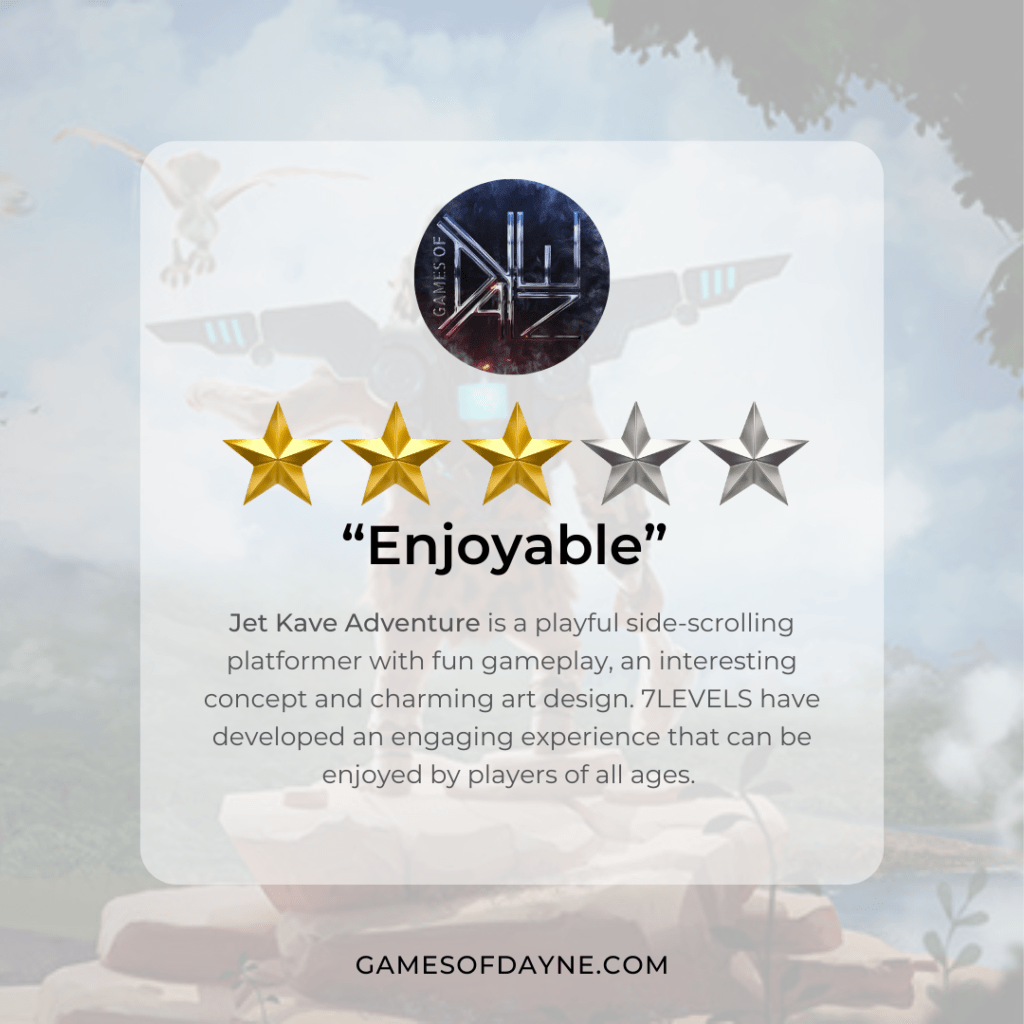 * A review code was provided by the Publisher/Developer for the purpose of this review. *

To pick up Jet Kave Adventure on the Xbox store, click HERE.