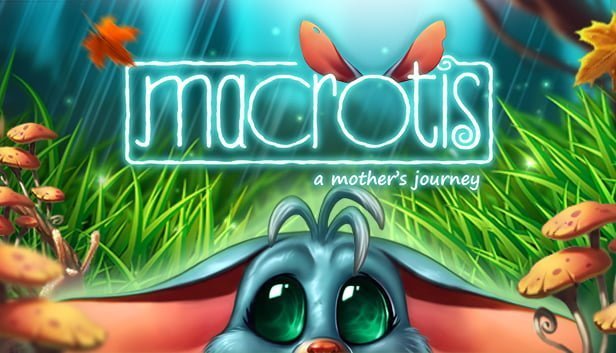 A mystical tale that highlights the lengths a mother separated from her children will go to.

A mother bilby separated from her children in the midst of a storm of biblical proportions and a wizard giving every ounce of his being to stop the rainfall are an unorthodox pairing that provide the heart of this platforming adventure. Macrotis: A Mother’s Journey tells this story with such emotion and beauty that leave you desperate to know how it ends.

Packing a decent challenge with its puzzle solving, this platformer is simply delightful, a visual treat and through charming sound design and authentic vocal performances, Macrotis: A Mother’s Journey commands the attention it so rightfully deserves.

Cinematics told through beautiful fairy tale-like illustrations and character narration guide the tale of a sudden and unrelenting rainfall that separates a mother bilby from her children, sending her crashing beneath the surface into a labyrinthian cave system. Determined to rejoin her children and ensure their safety, mother bilby must navigate the underground maze and find her way to the surface before it’s too late. 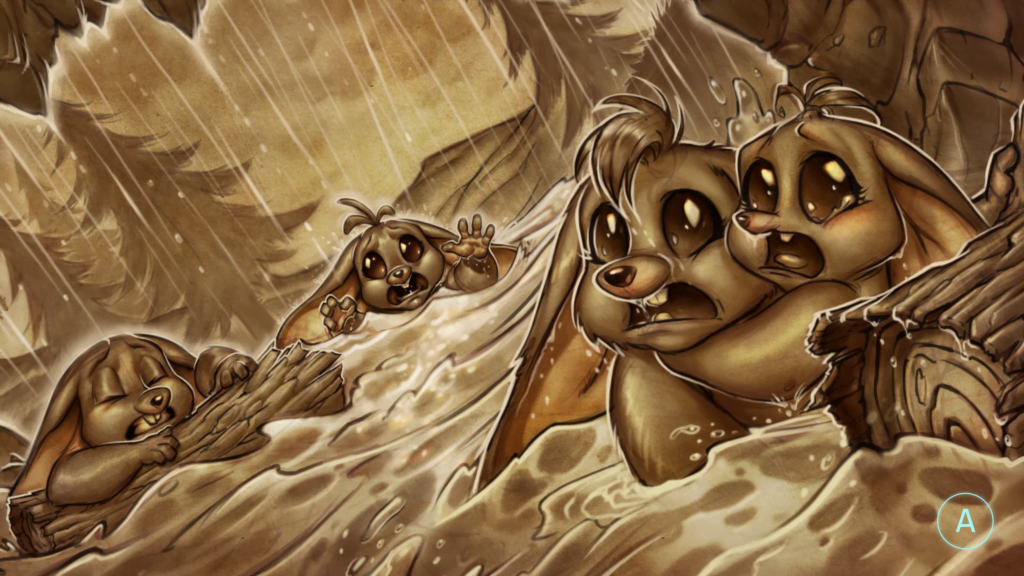 During her ascent through the underground mother bilby shatters a crystal that unknown to her was one of only two magical crystals that were being used to draw power from by a wizard, doing all he could do stop the rain. The spirit of this wizard talks to mother bilby and enter body, giving her access to a handful of his abilities to help her reach the surface and fulfil his dying efforts to stop the rain. 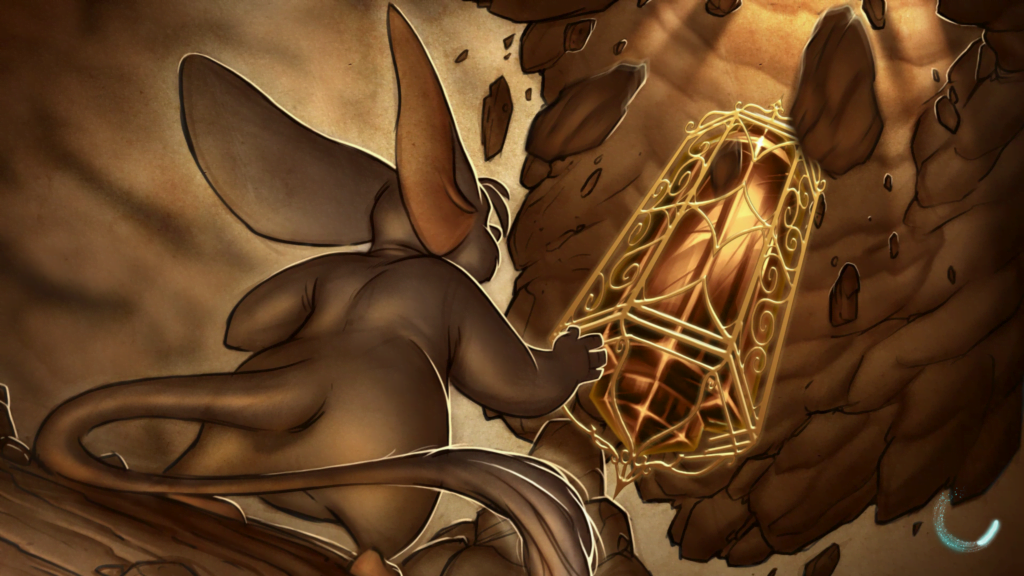 This pairing is made complete with regular dialogue of the duo exchanging stories of their lives. With each character having a family to hold onto and fight for, their combined strength allows them to overcome every obstacle in their path and come face to face with the storm that is desperate to tear their lives apart. The beautiful and emotionally moving final moments have such an impact that, on story alone, render Macrotis: A Mother’s Journey a powerful experience that plays on a mother’s love and her unwavering resolve to protect her children.

Scratch and claw to the top

Mother bilby finds herself in a labyrinthian hell, a metaphorical prison that separates her from her babies. Played in a 2.5D perspective, the player is tasked with navigating mother bilby through a series of environmental obstacles. Running and jumping from ledges and platforms, a number of environmental puzzles need solving in order to progress. Nibbling through dirt columns, moving rocks into position to ascend to higher plateaus, sliding logs around to create traversable platforms and interacting with levers to control gates in the forgotten sanctuary of an interesting race of intelligent creatures comprise the bulk of the core gameplay. 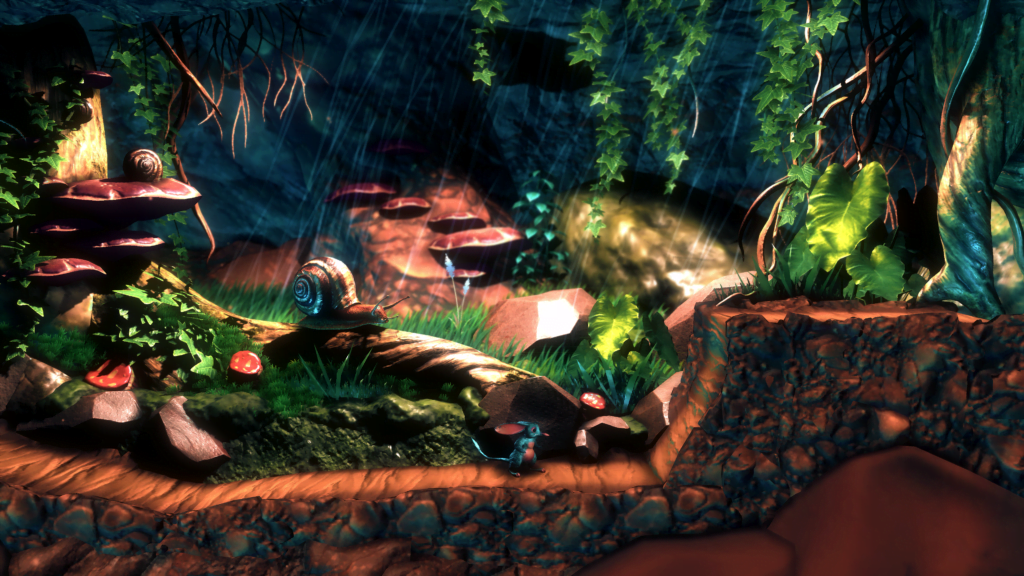 Upon the wizards spirit merging with mother bilby, the gameplay variety opens up with the introduction of magical abilities. Mother bilby is able to exit her own body in spectral form through meditation, not an unlike an out of body experience. While in this magical form, mother bilby can tap into a handful of abilities to assist with solving environmental puzzles and platforming. The ability to phase through solid surfaces such as columns or doors, breakable platforms won’t shatter due to the weightlessness and building columns to climb are at the players disposal. Access to this magic is limited however to the confines of a spherical area that shrinks with each use of magic. As the story progresses this area expands though it still closes in with use of these abilities. Precision timing and careful consideration of the correct sequence to solve puzzles can easily frustrate, particularly later in the game. The puzzles will be genuinely challenging for casual puzzle-platformer fans but those with a little experience will still endure a little trial and error.

The undeniably playful art design decorates the underground with strokes of vibrance and brilliance, capturing an enchanting emotion that is conveyed through its environmental structure. Exploring the remains of an ancient civilisation of a very intelligent species is striking while the caverns themselves feel fun and adventurous in their aesthetic. 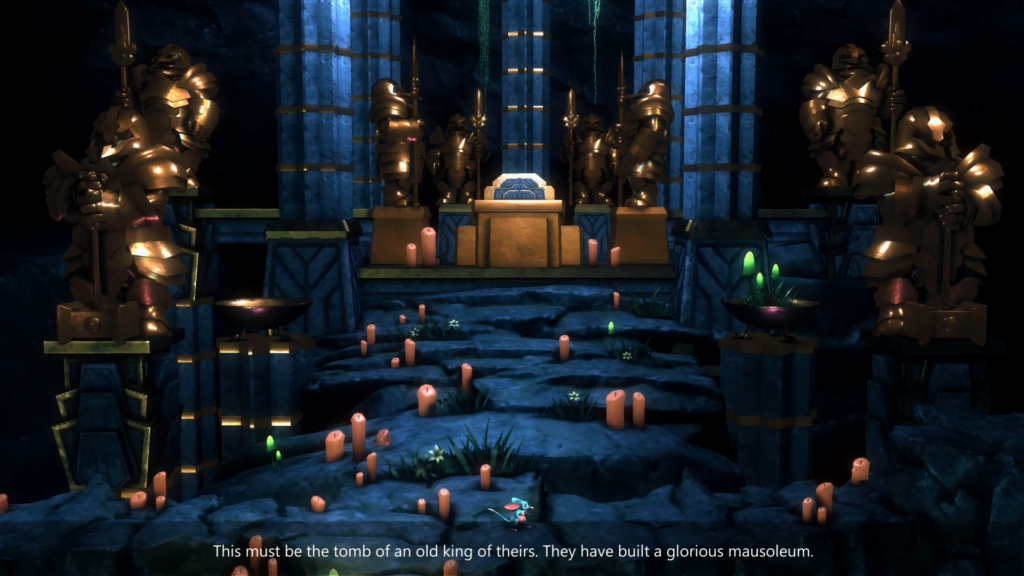 Solving the myriad of increasingly difficult puzzles and made an easier burden by the mere artistic presence. It’s inescapably charming and mother bilby herself is as cute and playful a protagonist as could be despite her emotional turmoil that is so beautifully conveyed through excellent soft spoken voice acting. The score is impeccable, a flawless companion to the pair of tormented souls as they fight for lives other than their own. Overall the entire presentation is so clean and beautiful in its execution and genuinely striking when it all comes together.

The unexpected pairing of a bilby and wizard plays out far greater than one would expect on paper. Their connection is beautiful, their purpose meaningful and their willingness to sacrifice everything, including their own lives, is truly powerful.

With varied and enjoyable gameplay that will genuinely challenge more casual players, this experience can be completed in as little as 2 hours if the players puzzle solving skills are up to scratch. Combining an interesting story, gameplay and creativity so masterfully, Macrotis: A Mother’s Journey is easily one of the best indie games I have ever had the genuine pleasure of experiencing. If there is a single word to describe this experience, it’s “beautiful”.