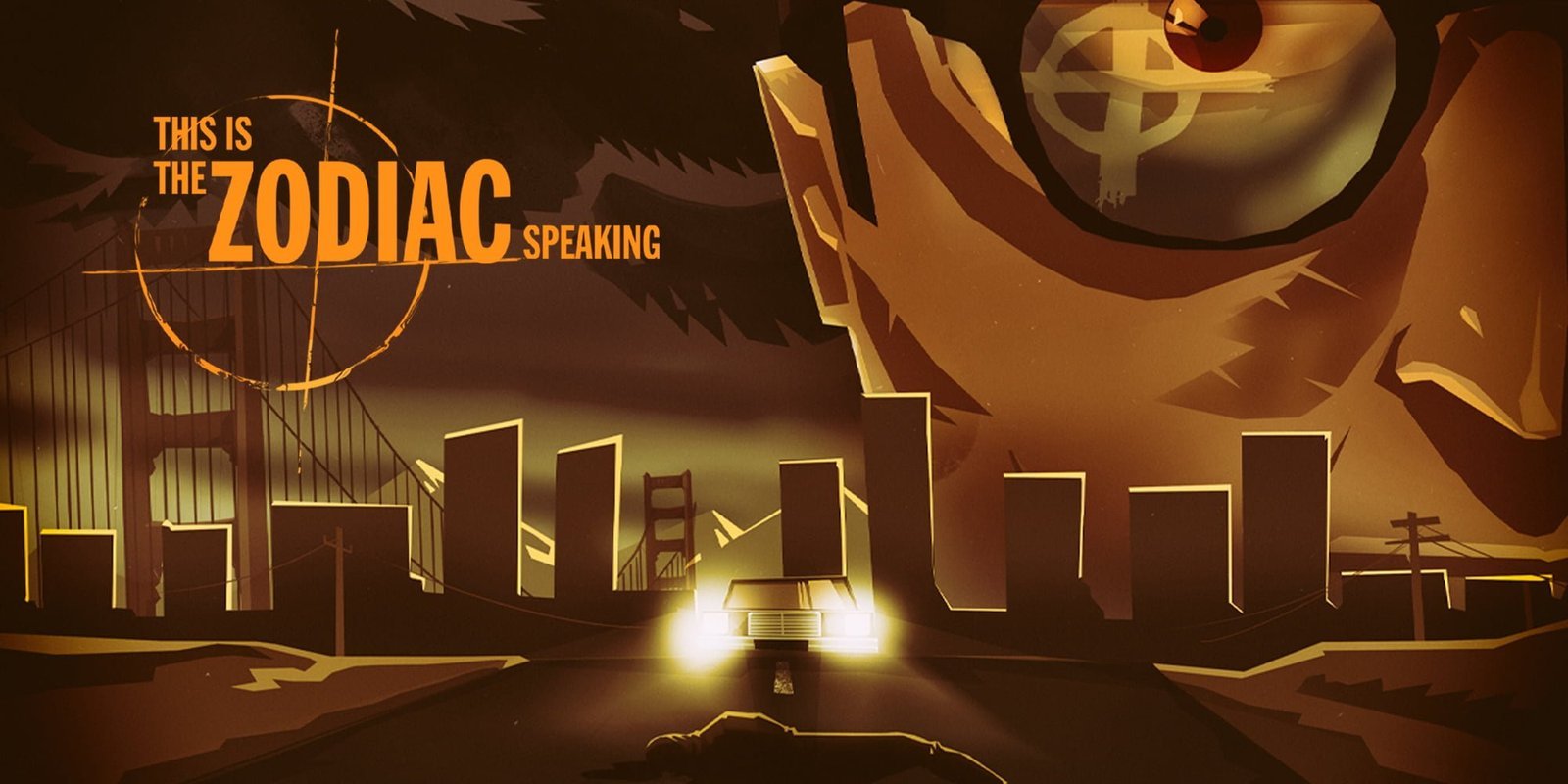 One of the most interesting yet unsolved cases in history should make for an intriguing adventure. Like the actual case itself, there are many unsolved mysteries at play in regards to the gameplay.

The unsolved case of the infamous Zodiac killer remains one of the world’s most recognisable stories, taking place in the late 60’s and early 70’s. Developer Punch Punk Games have loosely adapted the events in the form of This is the Zodiac Speaking.

Blending first person investigative gameplay and tense hide and seek encounters with Zodiac himself, the player must explore the environment and uncover clues and items of interest in order to progress while eluding the serial killer. Unfortunately, as with the actual unsolved case, there are inconsistencies within the game itself that keep it from being a complete experience.

Do I have your attention?

The story is played from the perspective of news reporter Robert Hartnell, a character inspired by one of Zodiac’s actual surviving victims. After surviving an encounter with the infamous Zodiac, Robert suffers from crippling psychological trauma and constant nightmares. Frequent therapy sessions see Robert go under the effects of “live dreaming”, a method Robert’s therapist uses to have him visit the crime scenes of Zodiac’s confirmed kills within his own mind, investigating and uncovering how Zodiac’s victims were murdered. 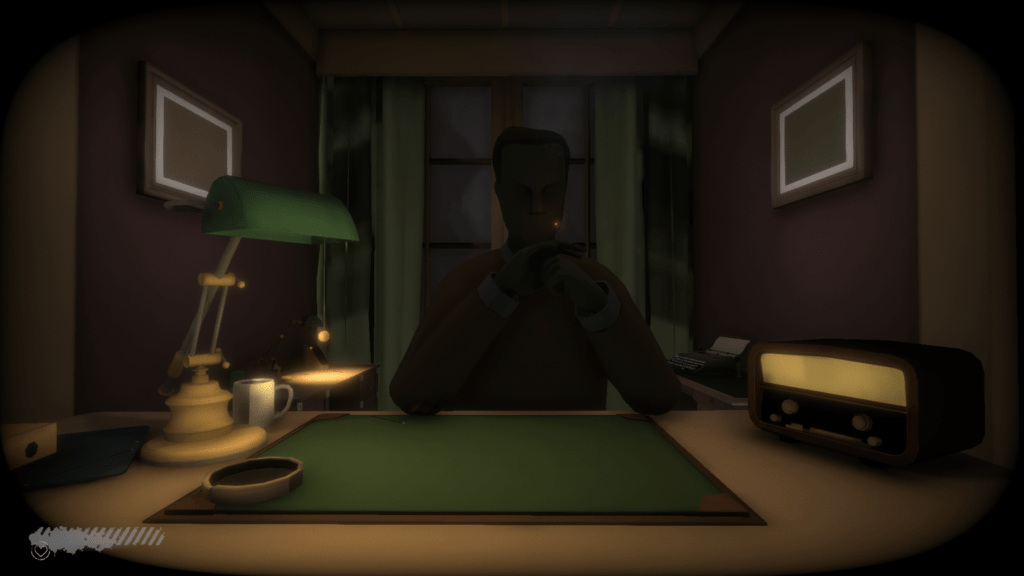 Along with this questionable therapy, Robert’s therapist also sends mannequins to his apartment to perform rituals that accompany the dream therapy. Upon completion of the dream sequences the player must then choose whether to recreate the murder or somehow “help” the victim. None of this is particularly well explained, justified or makes any sense and adds to the general confusion the player experiences throughout the disconnected story. 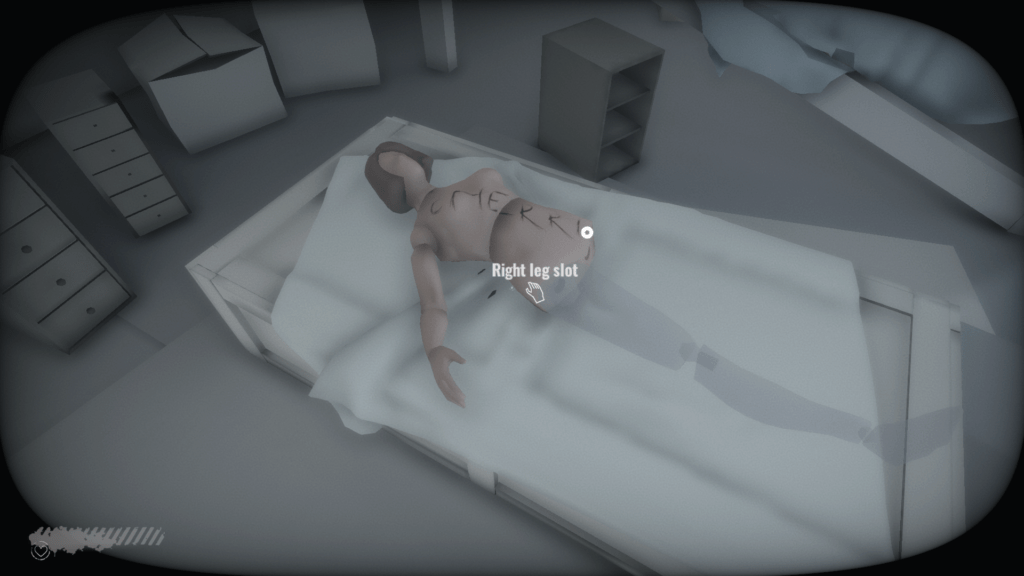 While investigating the crime scenes within these dreams, Zodiac lurks around and upon detection will chase down and kill the player. Breaking line of sight and crouching in the bushes or hiding in a room Zodiac doesn’t see is easier said than done as his field of view, in my experience, seems to be superhuman. Alongside his significantly faster movement speed, detection from Zodiac typically has only one outcome and the player must restart the chapter from scratch. An unforgiving stamina bar depletes too quickly while sprinting to salvation and takes too long to regenerate, more often than not proving a pointless feature as escaping is all but impossible. Throw in the fact that Zodiac will regularly stand in a single spot, blocking the only way forward leading the player to intentionally get themselves killed or restart the level. 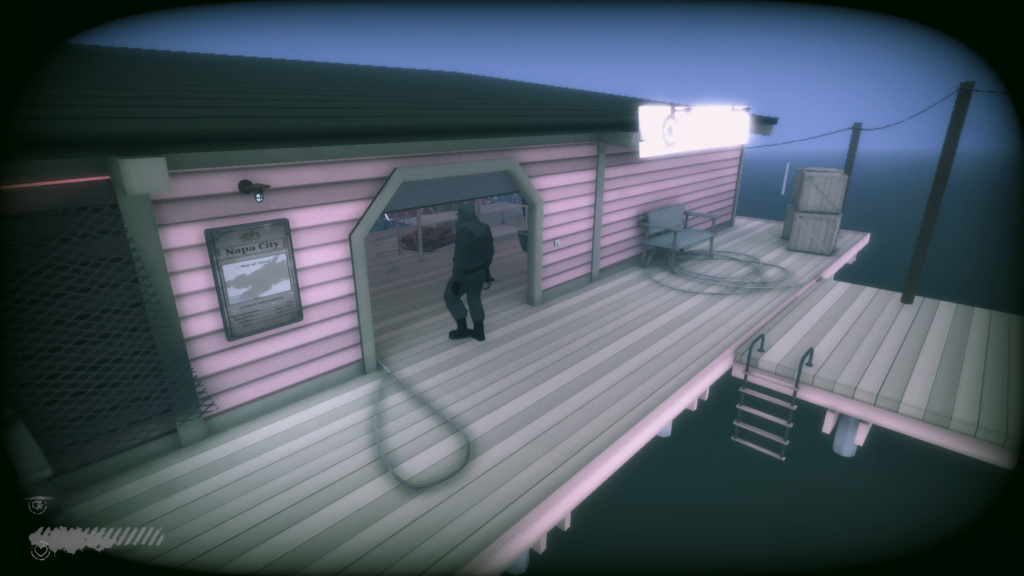 Attempting to solve these crimes with Zodiac stalking the area consists of interacting with countless items in the environment, majority of which are completely pointless. It quickly becomes apparent that inspecting everything is redundant and items of interest will never be one of the dozens of bottles or cans lying around, nor will it be the countless notes that do little to progress any narrative point with purpose or meaning. Once critical evidence is found, the player must find somewhere safe to hide and set the chronology of events that lead to the victim’s demise before using the sequence that follows to find a cryptic Zodiac message that ends the level. 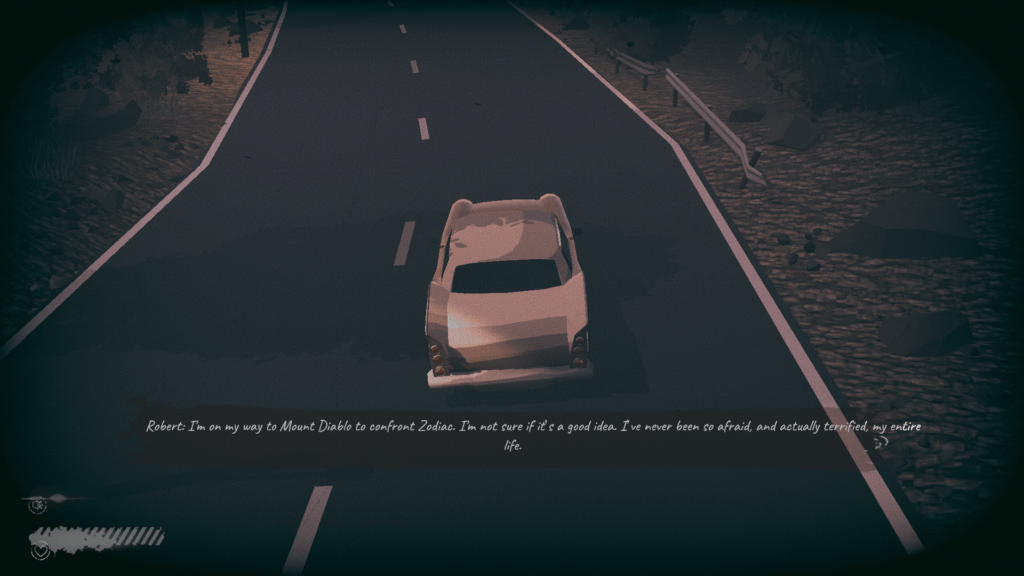 At the very beginning of the game the player is able to select a safe Story mode where Zodiac does not stalk the player. While this would make the game significantly easier, it would remove the only sense of tension or urgency and would render the overall experience pointless and, well, safe. Despite the issues with Zodiac’s prowling, he is essential in preventing This is the Zodiac Speaking from feeling like a threat-less walking simulator. 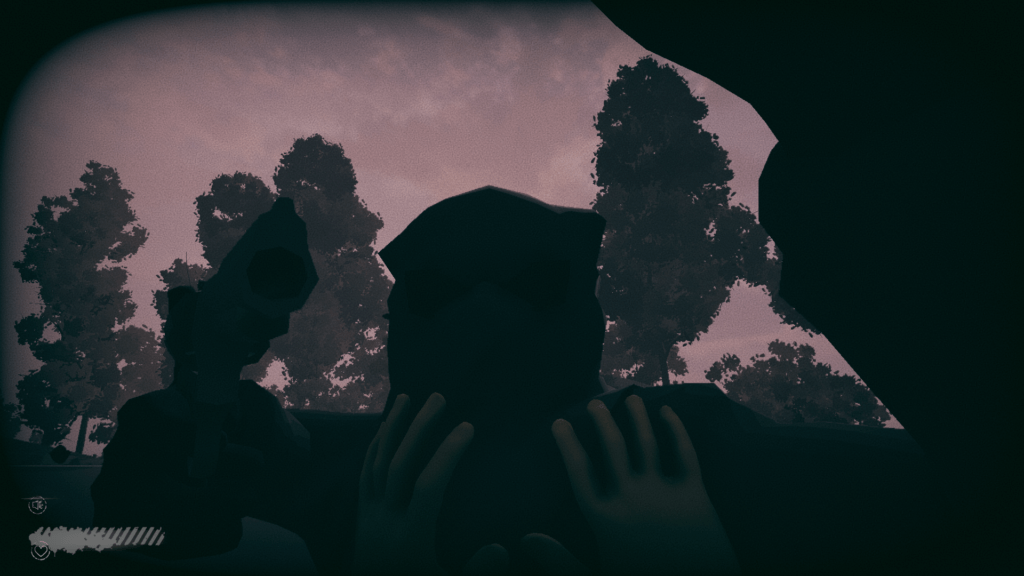 The story itself is interesting though it never has any sense of pace or purpose with mechanics and concepts that simply aren’t explained or justified to feel meaningful or worth including. An alarming number of the voiced narration does not match the text displayed, regularly breaking the immersion and in regards to the voice acting, it is incredibly wooden and inconsistent. Oddly, a text based approach would have perhaps been better.

From the odd execution of the gameplay and the unfair Zodiac chase sequences, This is the Zodiac Speaking is a mess, a mystery that its core mechanics can’t solve. Further muddying the infamous serial killer’s tale is messy art design and a lack of detail across the board. It could easily be argued that the style is artistic, a message and a character in and of itself but it comes across as broken and incomplete as the unstable framerate that accompanies it. Constant stutters, shifting the scene around with movement almost as though the world itself is moving with the player, creating a disconnect that eliminates immersion, stability and coherence.

The music is edgy and tense, with Zodiac’s presence bringing with it a unique track that alerts the player to his presence before making visual contact. While useful, it also removes additional tension that could have come from such a surprise encounter. Knowing where Zodiac is completely undermines the heinous genius of his actual historical self, remaining elusive and enigmatic are key traits of his real life importance. This unfaithful representation of the genuine terror that would accompany an actual encounter with Zodiac removes the player from feeling legitimate tension and unease.

Not all legends live forever

This is the Zodiac Speaking has a genuinely intriguing premise based on one of history’s greatest mysteries. The man behind the mask will likely never be identified and there is such a poetry to that which a video game could explore and convey. The concept is sound but unlike Zodiac’s crimes of atrocity, the execution is incredibly sloppy, messy and wreaks of inconsistencies that nullify any suspension of disbelief. 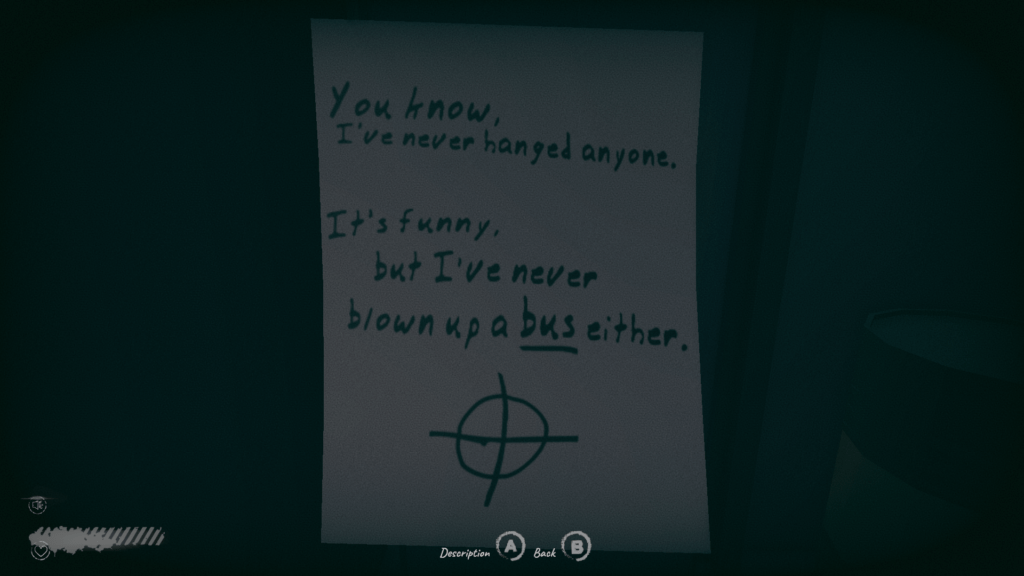 Zodiac admittedly does feel like a threat but that’s not due to his portrayal or character development but rather due to unbalanced AI issues and a stamina system that just does not work. His presence given away by music and his broken programming remove Zodiac’s potential to feel more ominous. The overall result is a broken and inconsistent experience that fail to deliver a meaningful thrill ride the premise suggests which is more of a crime than the disconnected blend of gameplay and narrative.

– Zodiac’s broken programming and presence given away