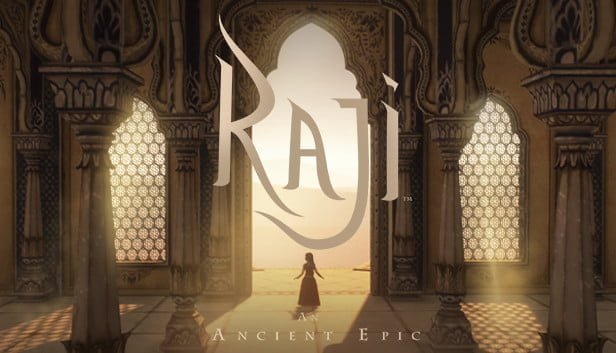 A beautiful blend of shadowplay and a stunningly realised world depicting Indian mythology set the stage for Raji: An Ancient Epic. Separated by demonic forces, Raji embarks on a mystical quest to save her brother. Unknowingly, Raji inserts herself into a divine war that sees her wield weapons of the gods as she comes face to face with legendary foes. Raji’s action platforming adventure truly is an ancient epic.

Raji’s life as a street performer forever changes when demons crash the Raksha Bandhan festival. Slaughtering all in attendance except for the children,  the demons abduct them, including her brother Golu. Attempting to save her brother, Raji is struck down and left for dead. With a single prayer to Durga, goddess of war, Raji is bestowed a sacred weapon and is tasked with saving not just her brother and the children but saving the world itself. 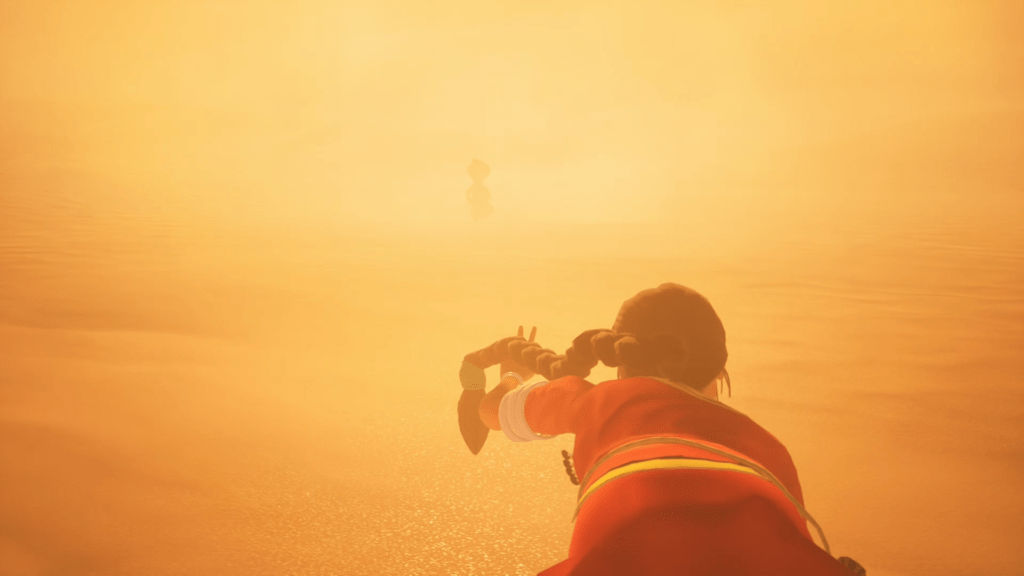 Raji’s journey is constantly narrated by Durga and Vishnu, the god of preservation. Their dialogue with each other is not heard by Raji but their words typically guide the player as if it were so.

Along her journey, Raji is able to interact with murals that are also narrates by Durga and Vishnu. These provide interesting insight into a variety of gods and mythological monsters that each play a part in the ancient war that Raji has unknowingly found herself a part of. 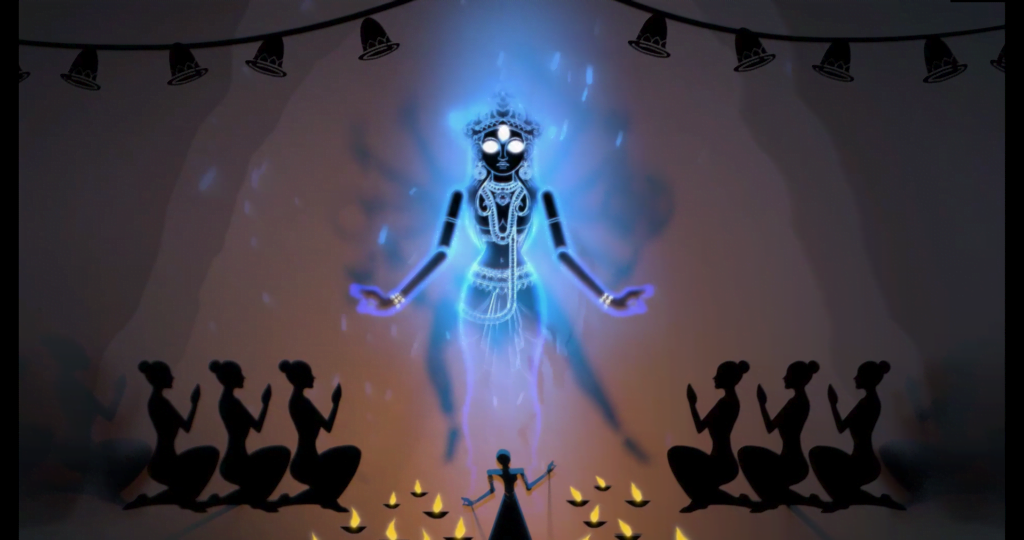 Raji’s evolution and self-discovery is fascinating to experience. Playing through Raji’s experience as she accepts her role in this divine tale and the strength she finds within herself and her beliefs is powerful and fascinating throughout. 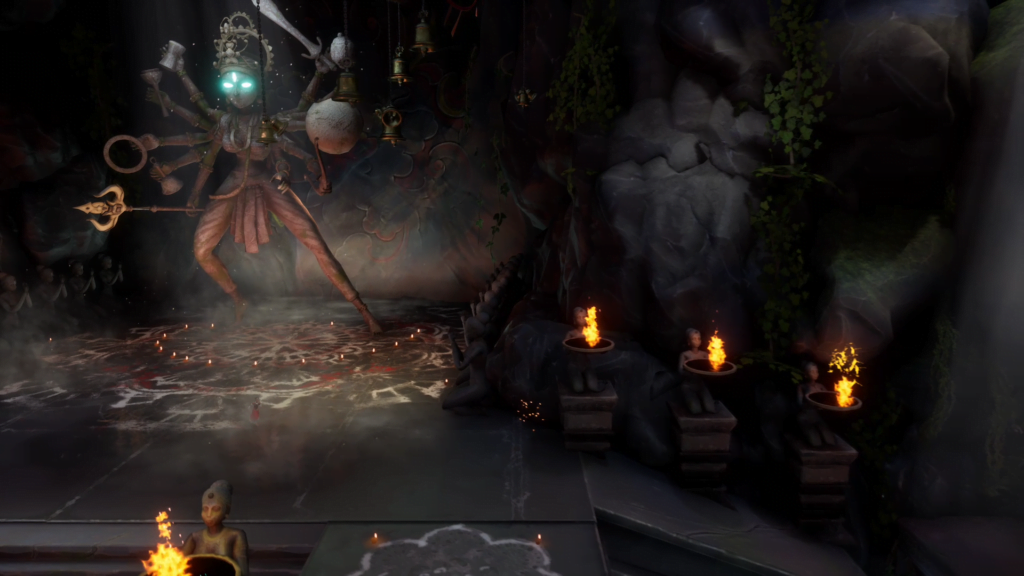 Coming in at around 5 hours, the story is interesting throughout with solid pacing as Raji explores a handful of enchanting environments while defeating the otherworldly demonic forces that stand in her way. Unfortunately the climax of the narrative ultimately underwhelms and fails to provide a meaningful conclusion to what Raji has been through in her efforts to find her brother. Instead of shutting the door on the story it is left wide open, with more questions than answers as it feels more like a prelude to another tale for Raji and Golu rather than a definitive ending.

Weapons of the gods

After receiving her first weapon in the prologue, the three chapters that follow each introduce a new one that comes with it a new dynamic to the rather simple but accessible combat. Each of the four weapons handle differently and as a collective embrace a melee and ranged attack variety and can be switched on the fly with the D-Pad.

Throughout the story, Raji is able to collect favour orbs that are hidden throughout each level that allow the player to upgrade a trio of elemental attacks attributed to 3 different gods. Each god represents a different element, ultimately offering Raji the ability to fuse electricity, fire and ice with her attacks. Each of these gods have 3 different abilities that can be upgraded to increase the chain damage for example that passes from one enemy to the next or stuns the enemy after contact. Which god/element is attributed to Raji’s weapons can simply be switched from the menu at any time as can collected favour orbs to reallocate them to other abilities to suit. 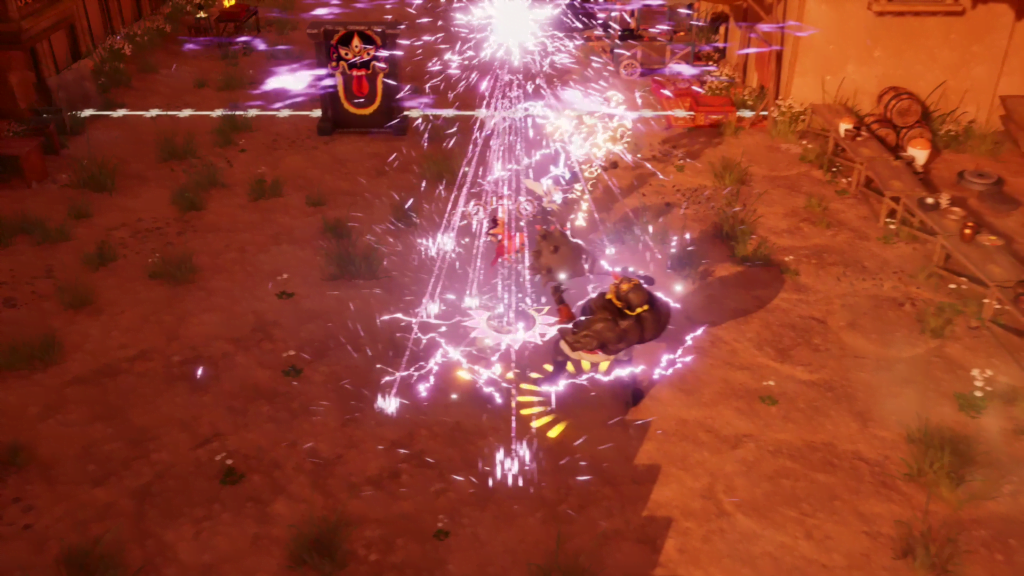 As for the combat itself, success will largely coincide with effective dodging and mobility. The variety of enemies gradually introduced throughout the different locations vary from melee, ranged and both. All enemies are relatively simple to defeat as long as the player stays on the move. The ability to use a pillar or a wall to springboard off and unleash an effective area of effect move can stun several enemies at once, making it easy to immobilise a group and target individual enemies until the stun wears off. When enemies have been damaged to a certain leave they can be executed with a cool finishing move that varies depending on what weapon is equipped. The combat isn’t particularly deep or engaging but its simplicity should appeal to even the most casual of gamers. 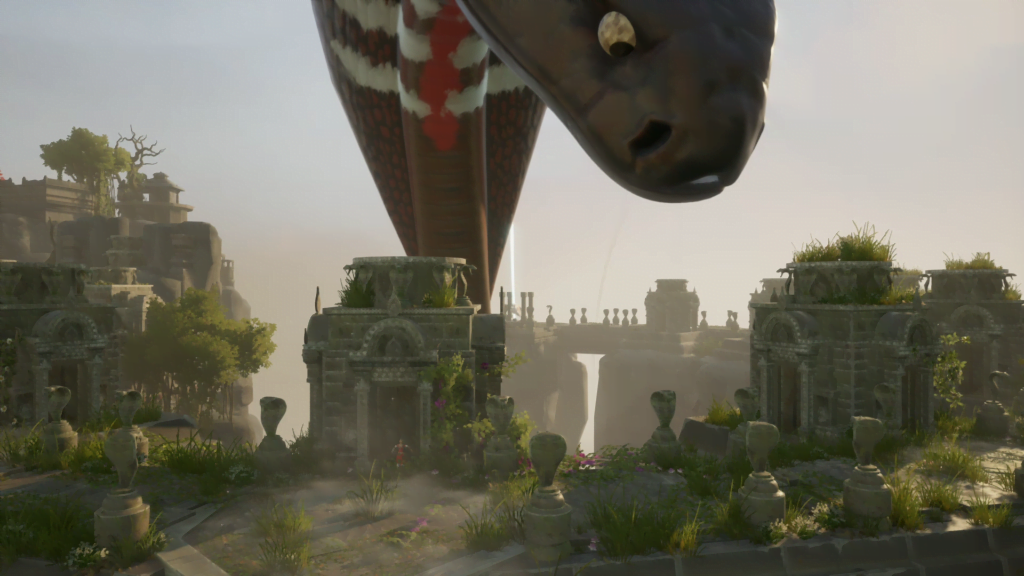 A boss battle against giant mythological foes takes place at the end of each level that requires the player to observe their attack patterns in order to effectively evade and attack when the opportunity presents itself. These larger than life encounters are easily the highlight of the combat overall and present just enough of a challenge to keep the player thinking strategically while again remaining rather simple.

The lay of the land

The explorable environments in Raji: An Ancient Epic are breathtaking when you consider this is an indie title. Nodding Heads Games have spared no expense when it comes to providing an incredibly detailed and wonder filled world rooted in Indian mythology. By cleverly utilising a distanced third person perspective the world of Raji has a larger than life feel with a scope of grandeur and marvel. Every piece of mythological architecture, every set piece feels otherworldly and Raji just a tiny spec in a sea of wonder. 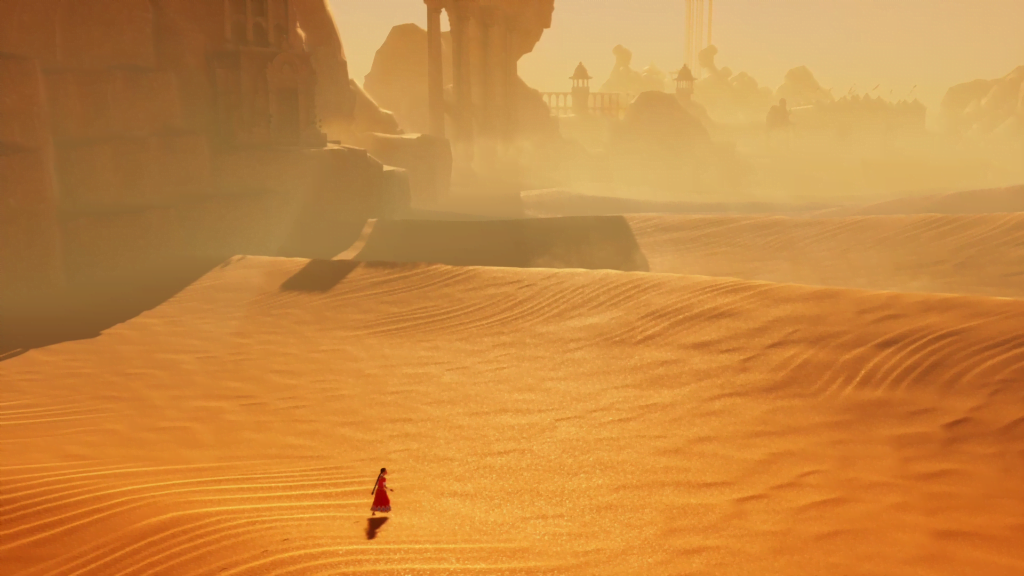 Vibrant colours paint the world and breathe life into the land once walked by the gods who now decorate its walls and palaces. The world is a genuine beauty that feels inhibited only by the inability to freely move the camera to fully immerse yourself within it, a real shame given the visual fidelity of the entire journey. 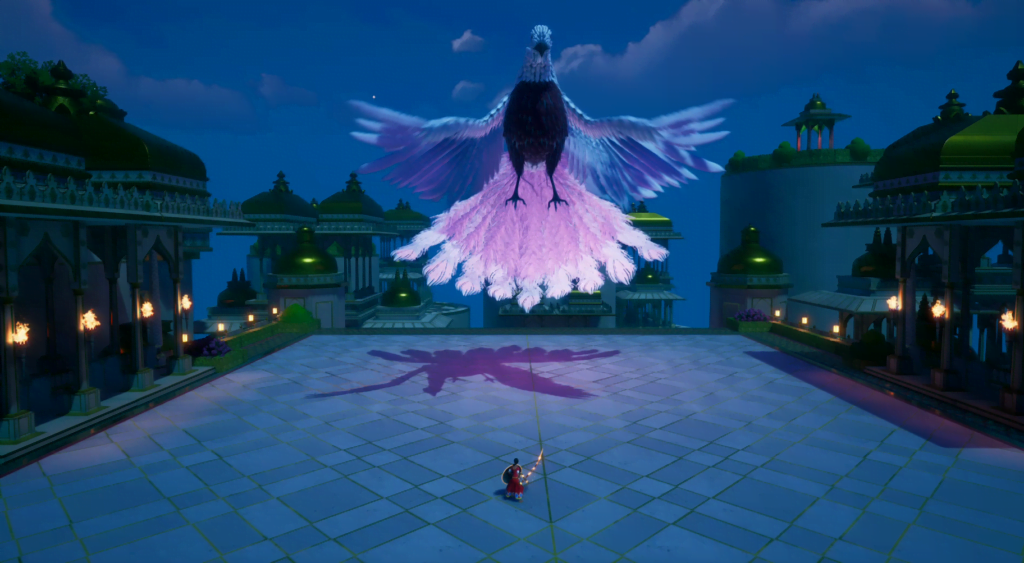 The platforming itself is simple and tasks the player with jumping, wall-running and climbing to traverse these grand environments. The restricted camera luckily does not hinder the ease of platforming and short of jumping to one’s death it is pretty difficult to actually miss the intended platform. Platforming plays more of a role in the overall gameplay than combat so it should be lauded for its accessibility in this aspect. The climbing in particular does allow for the camera to pan back and truly showcase the beautiful world that Raji inhabits. 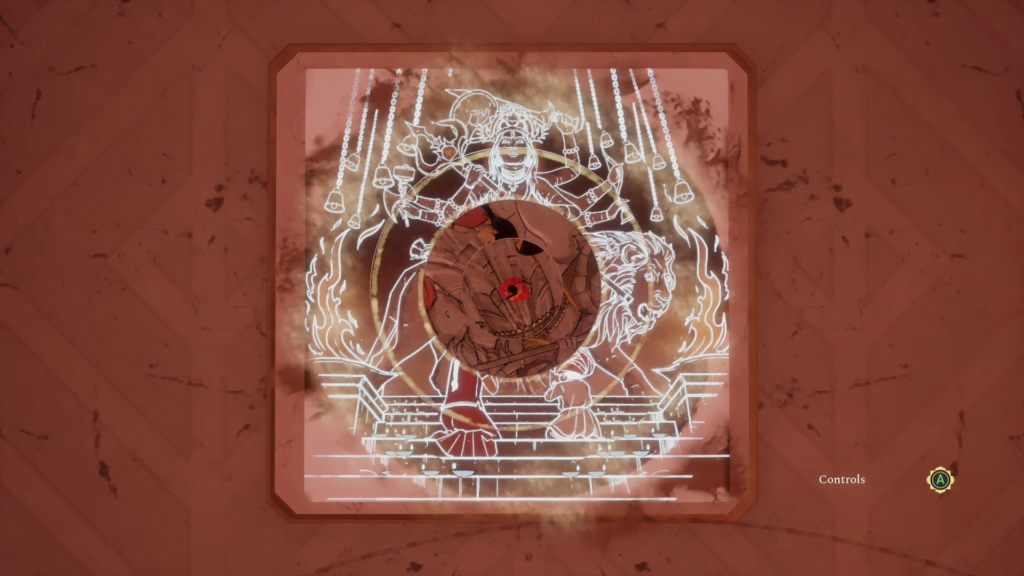 Light puzzle solving is present in the form of mandalas and demon trees. Mandalas need the picture arranged correctly by rotating a series of rings, the complete picture reveals a moment from Raji’s past that has a moment of relevance to her current adventure. Demon trees are the other puzzle element, solved simply by rotating 3 layers to create a whole and complete image. 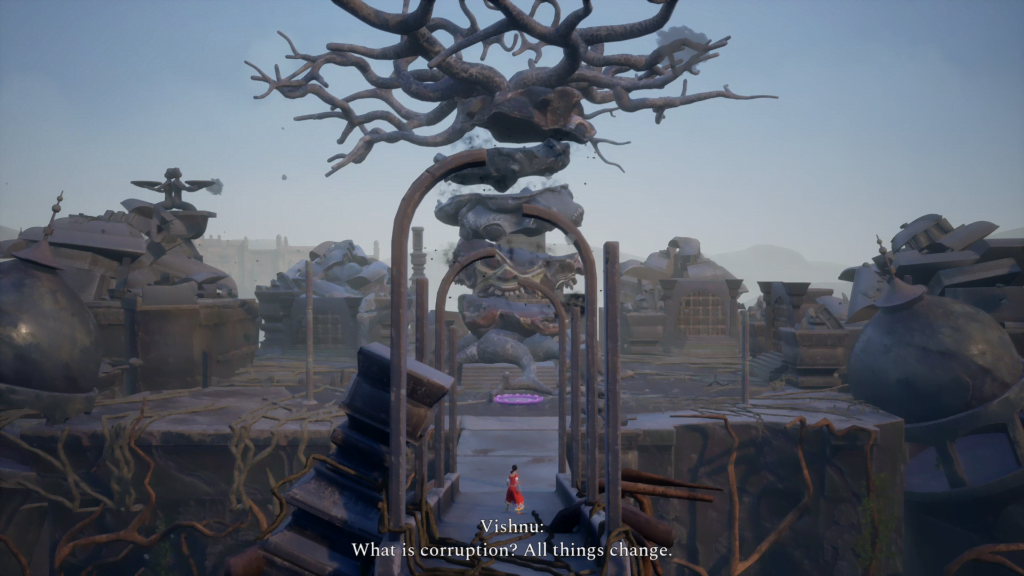 Despite the wonderful world building and stunning environmental designs, the gameplay itself feels dated and its simplicity works against it in terms of providing a deep and layered experience. The visuals are simply incredible, particularly for an indie title. Raji: An Ancient Epic is a huge step in the right direction for Nodding Heads Games and the stage has easily been set for what could become a franchise. 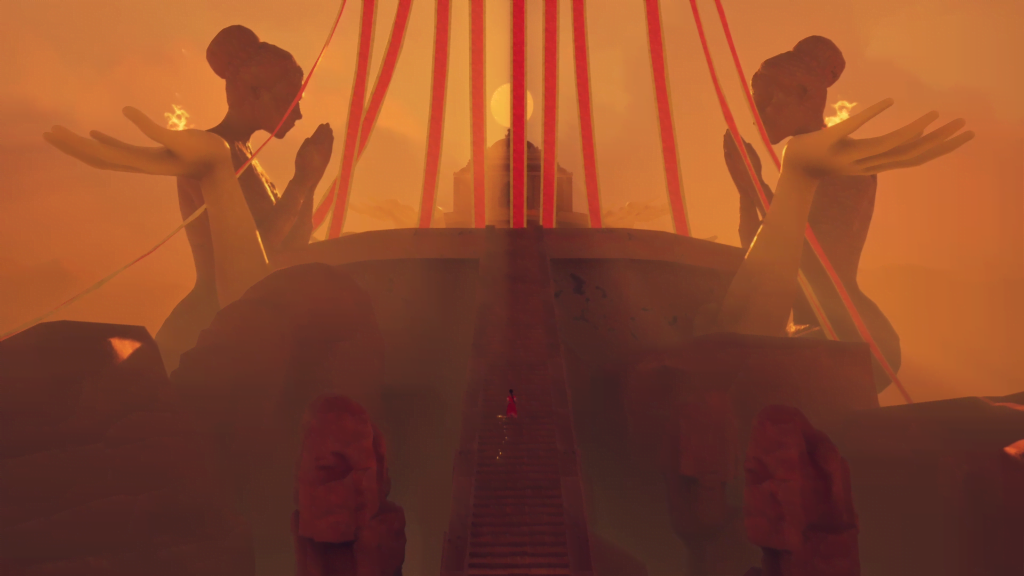 The lack of a chapter select or alternate difficulties eliminate replayability which is a real shame as this world of wonder craves attention and deservedly so. Ultimately feeling like a gameplay experience a decade too late, the overall presentation and its beautiful melodies are dripping charm that competently stands out as one of this years and this generations most enchanting experiences.