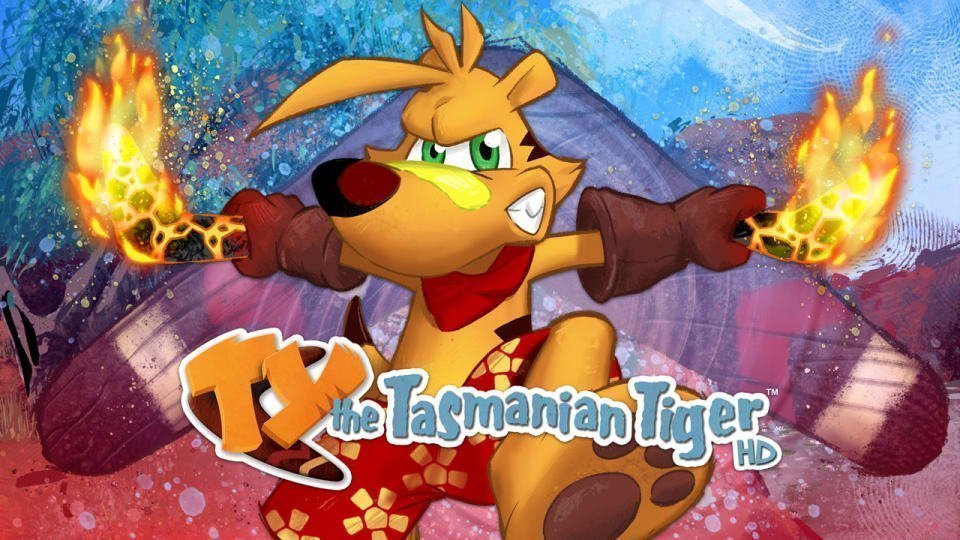 This Tasmanian Tiger is far from extinct, Ty’s first bloody ripper of an adventure has received the HD upgrade and made its current gen debut!

A 3D platformer that first threw a boomerang on the scene back in 2002, Ty the Tasmanian Tiger sees its titular protagonist explore a fictional Australian Island. Ty is out to collect Thunder Eggs to power a machine that locates 5 magical talismans required to free his family from an alternate realm known as “the dreaming”. This intriguing premise remains untouched in Ty the Tasmanian Tiger HD 18 years later. Despite a few visual improvements, the gameplay unfortunately shows its age.

Ty’s adventure to find the talismans spans three trilogies of levels followed by a boss battle and two additional levels, 14 in all for the main story. Spanning locations such as jungles, the outback, snow capped mountains and beaches, this adventure sees Ty encounter several interesting and very Australian characters. His dingo love interest Shazza, a quirky scientist koala named Julius and Ken the Tasmanian Devil park ranger are just a few but they are all extremely Australian in character, personality and dialogue. 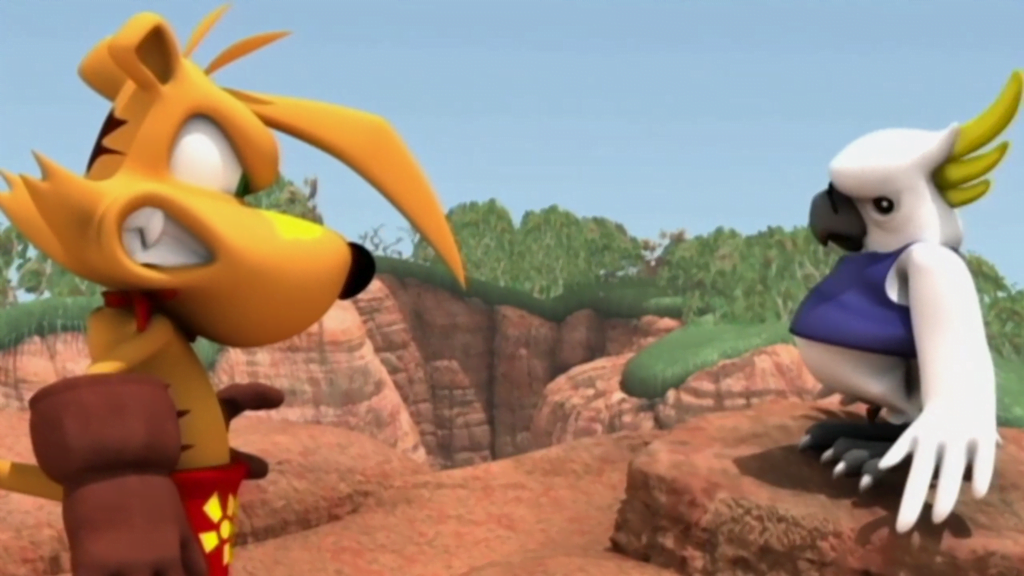 As a New Zealander who has lived in Australia for nearly thirteen years, I can admit I couldn’t understand some of the lingo back in 2002 but luckily just over a decade here has made me familiar with it now. The exaggerated accent and slang such as “bloody ripper”, “cobber”, “too right” may feel particularly foreign to players outside of Australia and will likely alienate as it is certainly an acquired taste.

The story is decent, not particularly memorable but is told with often amusing cinematics featuring the evil Boss Cass, a cassowary, and his moronic lizard goons. 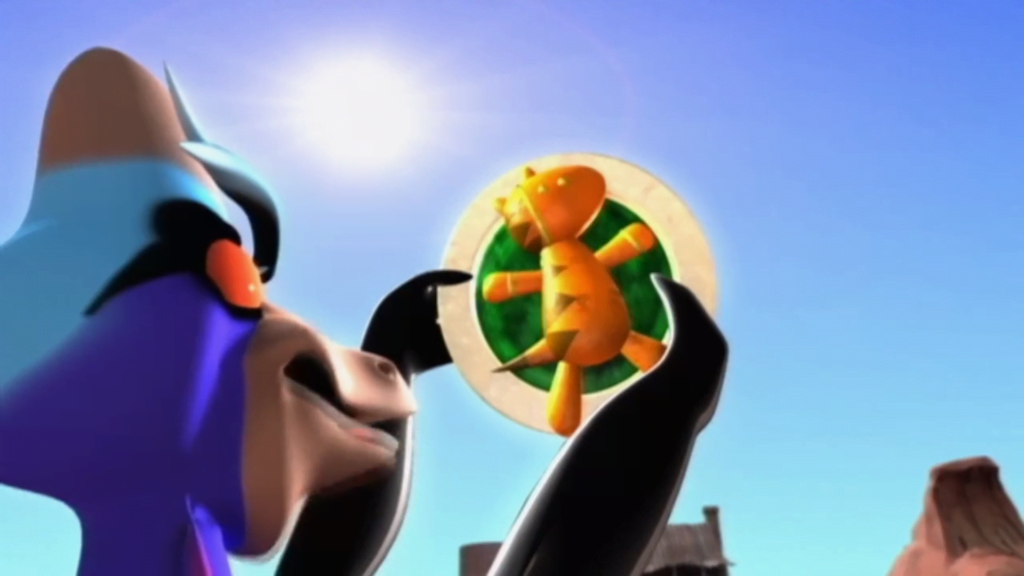 Ty is a bi-pedal Tasmanian Tiger, running around on two legs instead of four as per the actual extinct Tasmanian Tiger. Dressed in shorts, a scarf and gloves, or a handful of alternative outfits immediately accessible from the menu, Ty defeats his foes one of two ways. The Bite attack and a pair of boomerangs referred to as ‘rangs. 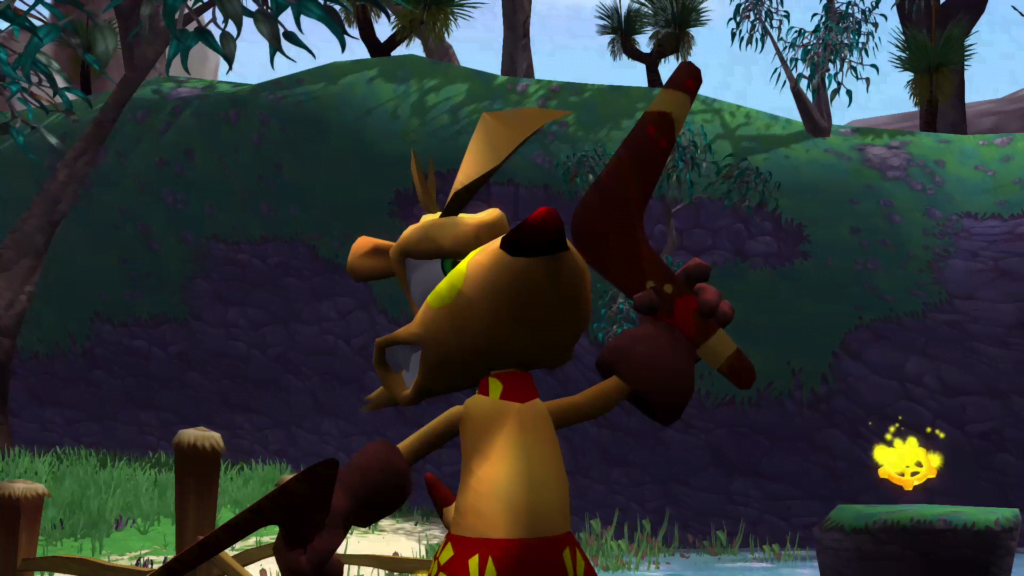 The variety of boomerangs on offer include the fiery Flamerang which can be used to melt ice mounds and the electrifying Zappyrang that can electrocute enemies. The boomerangs can be quick thrown or by an aim down sights style system.

Enemy variety is fun with a handful of different lizards, kangaroos and even robots to defeat. They are all simple enough to defeat and pose no real threat to a careful player. 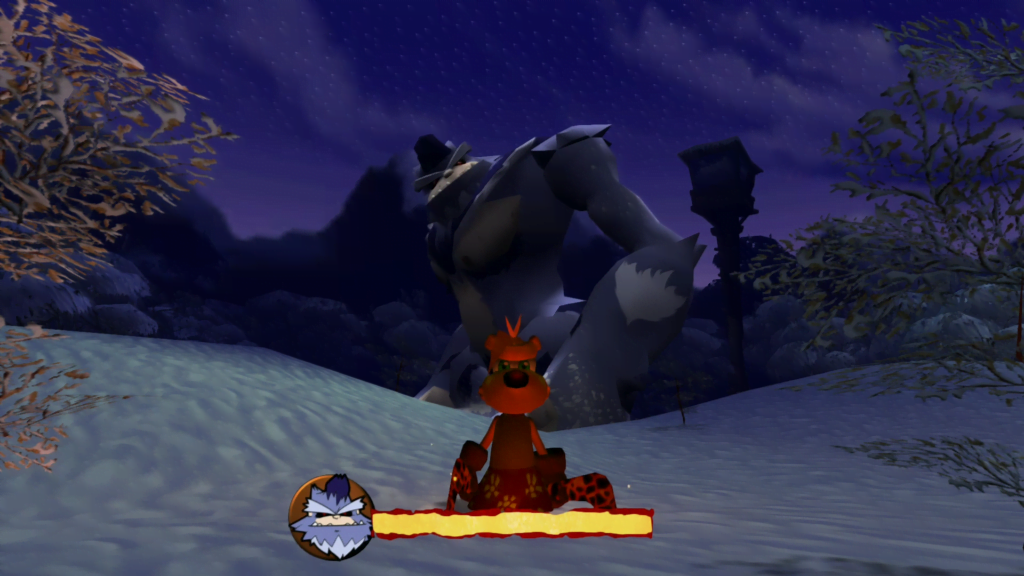 The platforming largely consists of Ty navigating areas full of environmental hazards. Jumping, swimming, diving and gliding will all be required for Ty to navigate his surroundings, all of which are learned fairly early into the game. Some sloppy tutorials may prompt a player to want to play with subtitles as how to do certain things is told via dialogue only and mention of a button to press despite no on-screen visualisation. This makes the basics difficult to learn if not playing with sound or full attention is not paid to these spoken instructions.

Side stuff to keep a Tassie Tiger bloke busy

There are several objectives within each level and while most are optional, serving only to provide completion it’s with an alternate ending and a pair of bonus levels, the player requires 17 Thunder Eggs for each zone to progress to the boss fight and new zone that follows. Thunder Eggs are obtained in a few ways. There are 8 per level and can be found lying around somewhere typically accessible and visible, some are awarded for completing tasks for secondary characters. These vary from the likes of finding missing children or a missing friend, protecting a couple from a Kraken like octopus while they steal hidden treasure or catching some very fast animals that have absconded with a Thunder Egg. 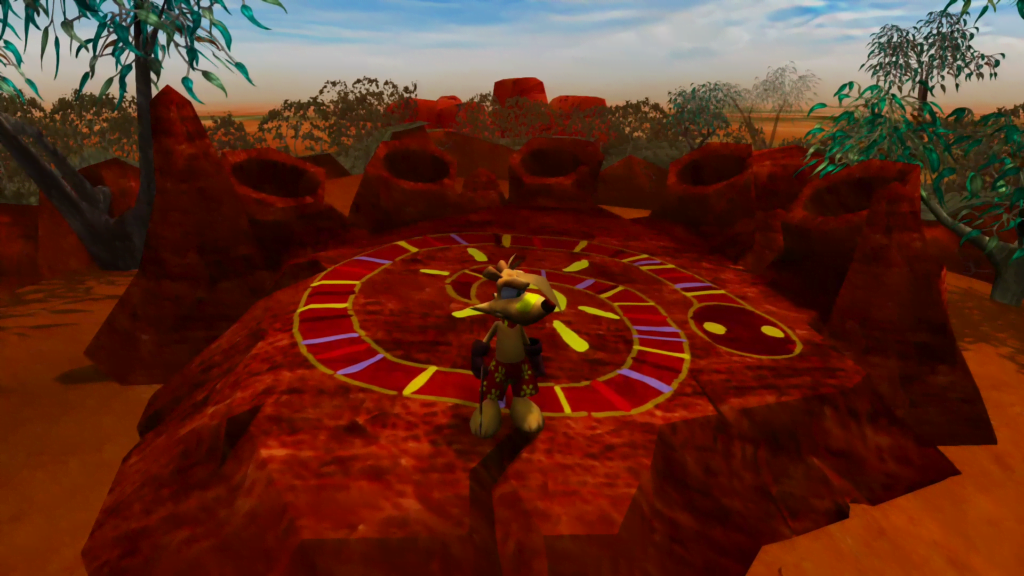 Additionally, each level has 5 billbies that have been trapped in cages to be rescued. By following their “coo-ie” call outs to locate them, upon rescuing the fifth a Thunder Egg will be awarded. Once a level has been completed, a Time Attack challenge becomes available, requiring the player to complete a short checkpoint based race that awards a Thunder Egg. 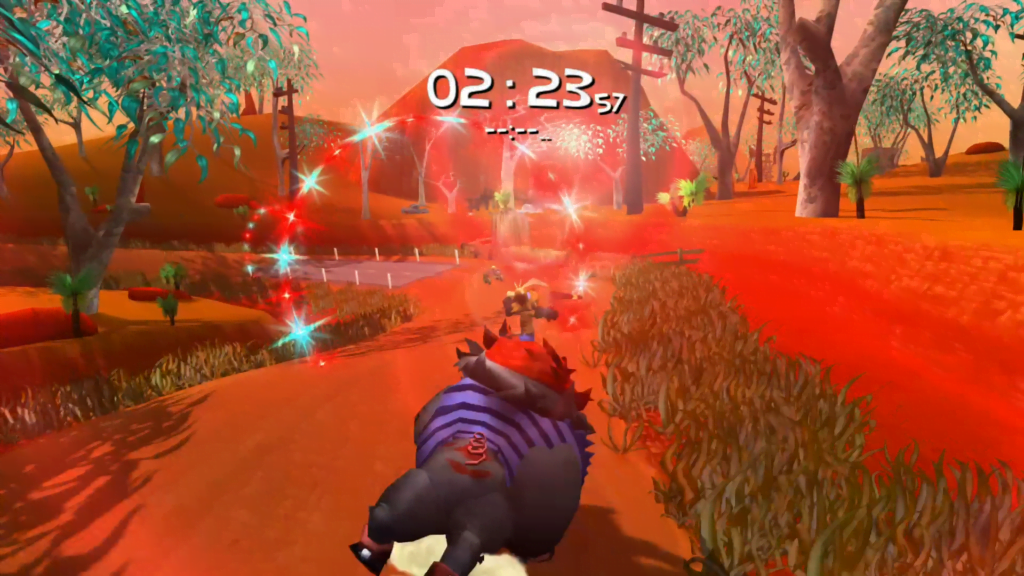 Outside of Thunder Eggs, there are a 10 golden cogs to find in each level and a varying number of picture frames to find. These cogs and picture frames are not required for story progression and are only required if the player wants to collect everything in order to unlock the 100% ending and bonus levels that follow.

Stuck in its own charm

Ty the Tasmanian Tiger HD has had a little visual boost for sure, grass for instance is a lot more plentiful and three dimensional but overall it looks like a 2002 game. Stuck in its own charm from nearly two decades ago, Ty’s maiden voyage into the platforming genre looks and plays much like it did upon its original release. This will likely divide players, those who played the originals may admire the fact that it is more of a port than a full blown remaster while newcomers to the series might struggle to find the gameplay of the early 2000’s enjoyably accessible. 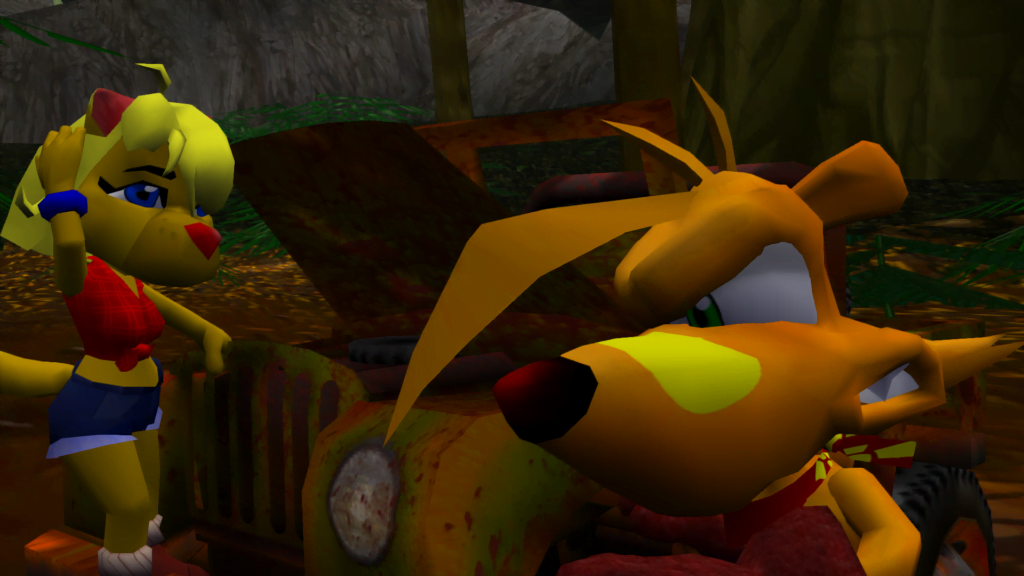 You beauty! (for its time)

Ty the Tasmanian Tiger HD is a faithful port of a classic platformer more-so than a remaster. It is essentially the same game that I enjoyed before I was even a teenager, so being able to play it again slightly touched up on the verge of 30 is a nostalgic blast. Newcomers may find it difficult to pick up this classic in its relatively untouched glory but it’s worth a visit. 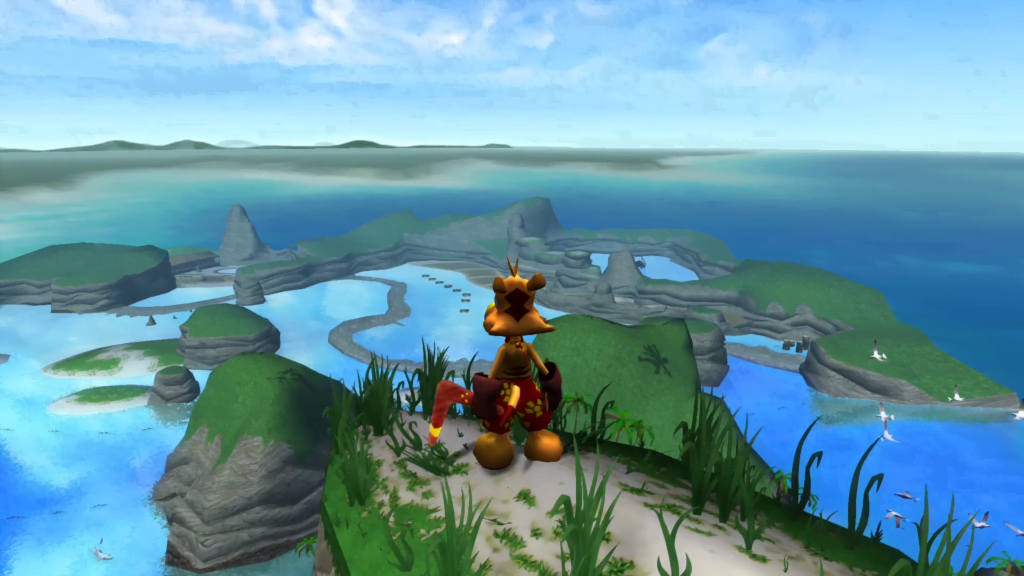 It’s rather short, leaning towards 3-4 hours for the story for a platforming regular while it’s easily double that for a more casual gamer. Take on the challenge of chasing that 100% and the playtime can easily reach double digits. Ty the Tasmanian Tiger HD shows its age but there’s a charm to that which can be admired. Nonetheless it’s a fun adventure for those who enjoy the likes of Crash Bandicoot in particular with an Aussie flair that puts a distinct exclamation point next to the overall experience.

+ Plenty to do within each level

+ Characters are quirky and unashamedly Australian