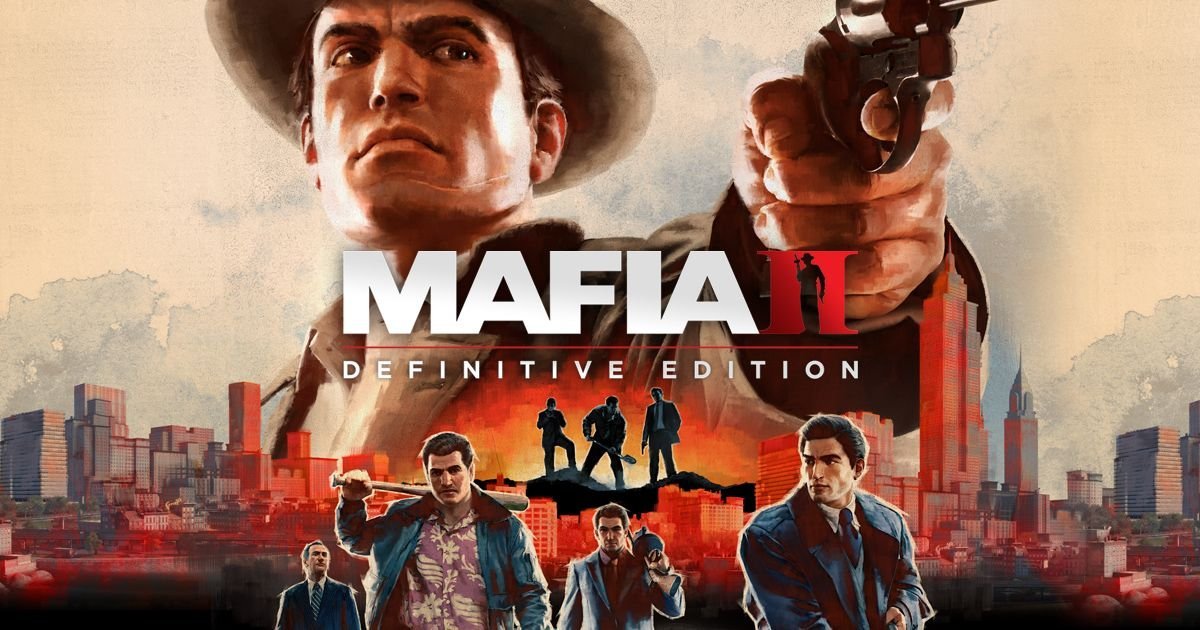 Life in the mob is tough and so too is following up on the excellent original Mafia that preceded Mafia II.

The tale of Vito Scaletta is no gangsters paradise, casting aside what worked in the original Mafia for a less charismatic lead and a story that lacks purpose. Originally released in 2010, Mafia II has received some technical enhancements as well as all three of the DLC to come together in Mafia II: Definitive Edition. Struggling to reach the heights of the first Mafia, even this remasters bells and whistles hold it back.

It’s all about family

The opening cinematic has protagonist Vito Scaletta recounting his childhood, derailing his family’s move from the Italian town of Sicily to Empire Bay in America. Vito’s life has never been easy and the adoption of a life of crime with best friend Joe Barbaro sees him arrested in 1943. Dodging a prison sentence in exchange for enlisting with the US Army during World War II, Vito’s service is short lived as he returns home 2 years later on leave after taking a bullet. 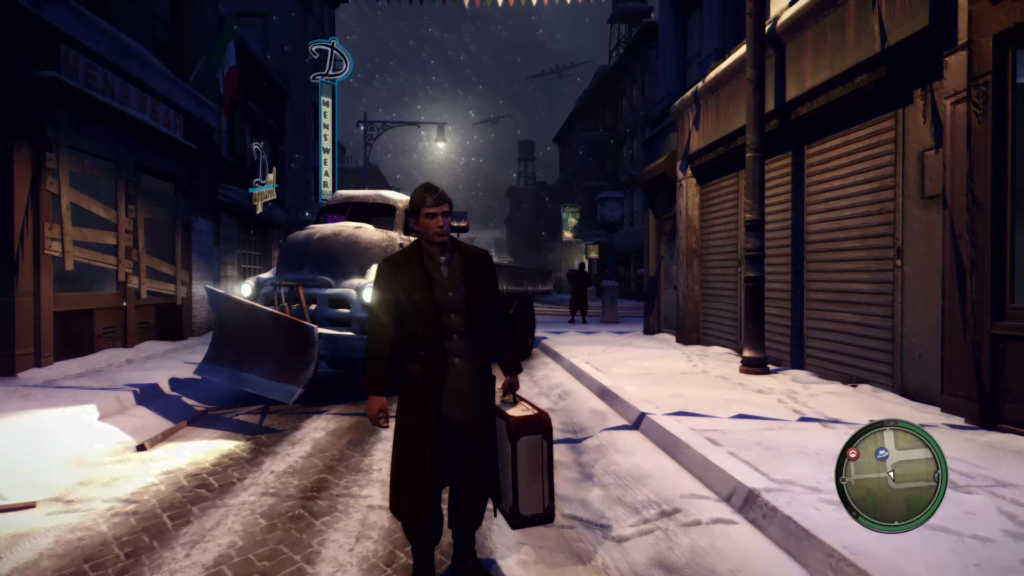 Joe wastes little time upon his friends return to arrange for counterfeit discharge papers so that Vito can stay home permanently. Learning of his late fathers debt to a loan shark, Vito needs to work to secure the livelihood of his mother and sister to avoid any further interest or harassment from the loan sharks goons. At the recommendation of his mother, Vito briefly works for his fathers former employer Derek Papalardo who then recommends him to a prominent figure in the Clementi family.

This tale of Vito sprawls out rather quickly, serving time again in prison before becoming a made man in Don Carlo Falcone’s family alongside Joe. As the pair rise through the ranks, betrayal, power struggles and questionable business decisions send the story in a variety of directions with consequences that continue to push the story forward. A transition from the 1940’s to the 1950’s during Vito’s prison sentence is wonderfully conveyed in its aesthetic. The way people are dressed, the types of cars driving around and the music changes with it, giving legitimacy to the time jump which is overall executed well. 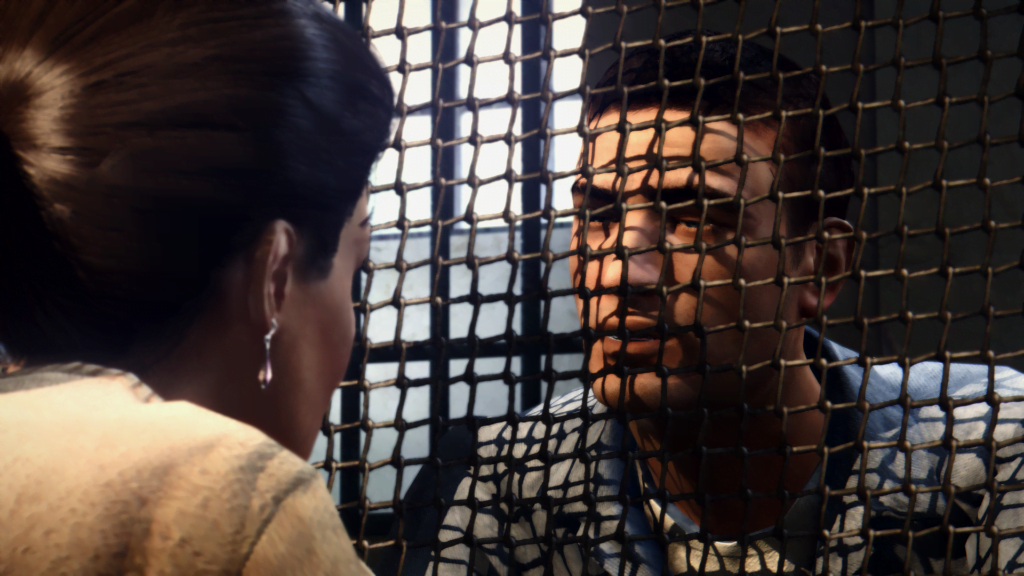 Vito’s motivations are initially to protect and look after his family as he and Joe become accustomed to life as made men in a prominent crime syndicate. Their greed gets the better of them and compromises the balance amongst the other two crime families in the process, starting a war they can’t finish without crossing lines and significant bloodshed.

Full of drama, action and thrilling story beats, perhaps the most crippling element of the narrative is Vito’s lack of personality or player investment. He’ll flip in the same scene from accepting a gun from Joe without hesitation to questioning why Joe himself is carrying one. Vito as a character is inconsistent and while his intentions and directions are at times clear, his journey overall is not tethered to any grounded plan. 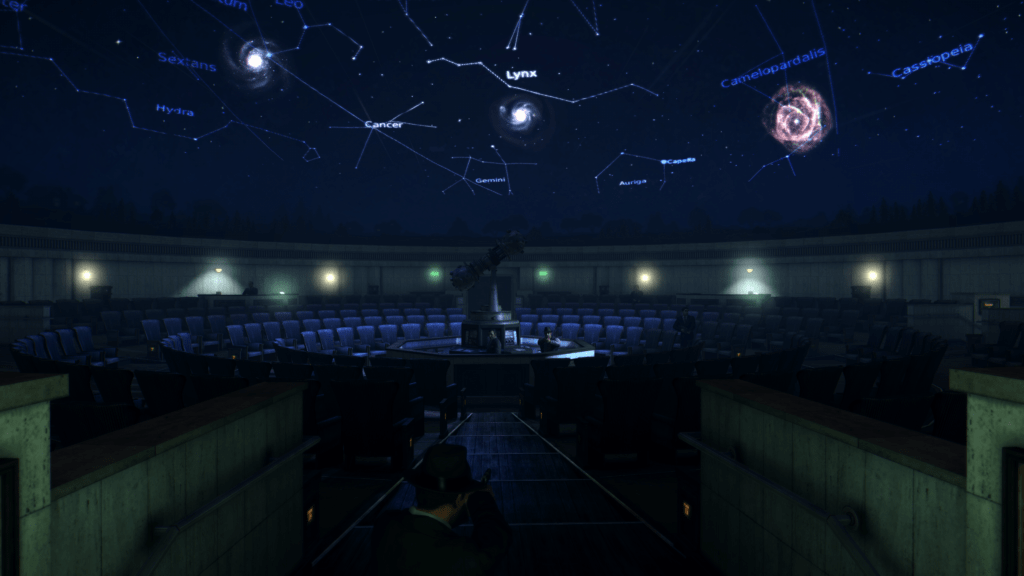 The final act ramps up the tension and thriller vibes, with a very cool moment that intertwines with the shocking conclusion of the first Mafia but overall the interesting story ultimately underwhelms, leans on predictability and fails to have a purpose as meaningful as its predecessor.

Third person shooting is at the forefront of the gameplay in Mafia II: Definitive Edition. The gunplay itself handles well, an assortment of guns ranging from shotguns, rifles, pistols and machine guns have variants that each feel unique. The cover mechanics lend well to disposing of enemies from the safety of a concrete pillar, desks and barricades for instance that are only temporary. These covers can be destroyed so careful attention must be paid to their deterioration after a flurry of shots. 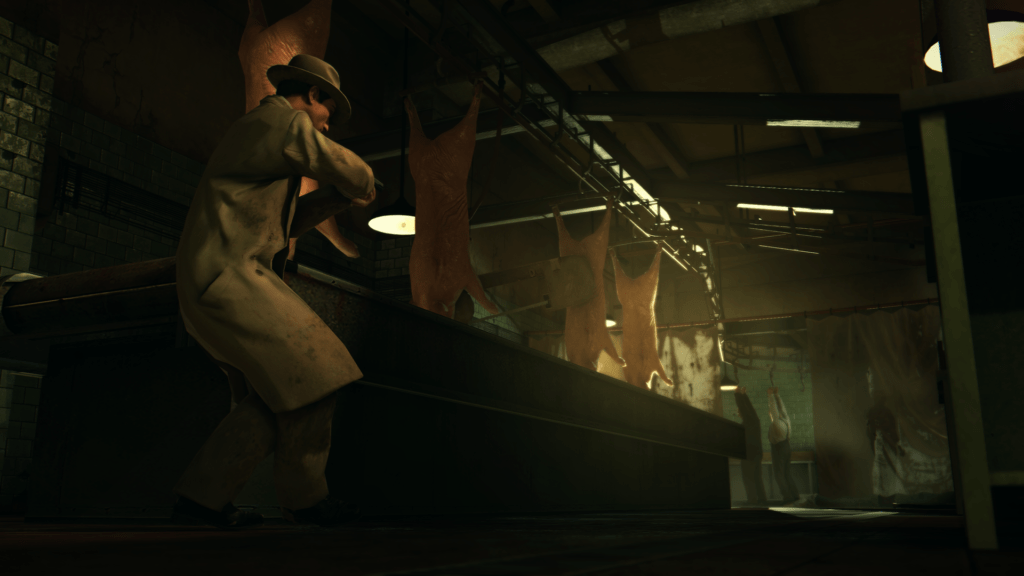 Driving remains tedious for the second instalment in the Mafia series, as per my review of Mafia: Definitive Edition (which can be found HERE) this can partially be attributed to the time period and the manoeuvrability of cars in the 1940’s and 50’s. Driving gets a lot of time so it’s unfortunate the mechanics don’t feel more enjoyable. 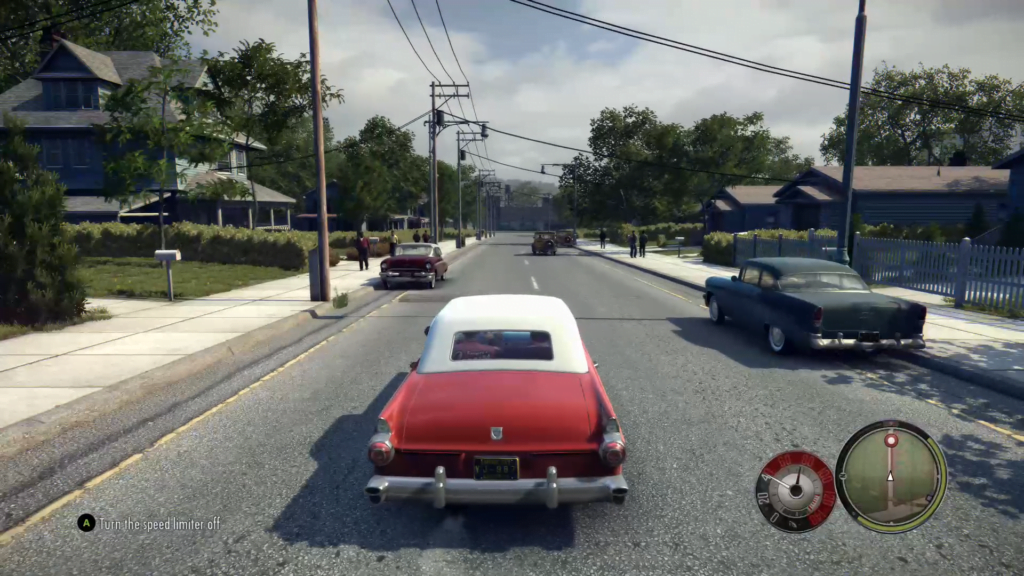 The customisation for cars is fun, albeit rather limited. Any car can be taken to a mechanics and have a custom colour applied, performance tuning and new wheels added for example. Custom licence plates can be acquired too which is not just a vanity item but rather a means of clearing a wanted level when the car is being hunted by the police. This is a fun and clever mechanic that adds some tension to the players escape. Just because the police aren’t in direct pursuit does not mean the player is safe as the car will be identified almost immediately when spotted by the police. 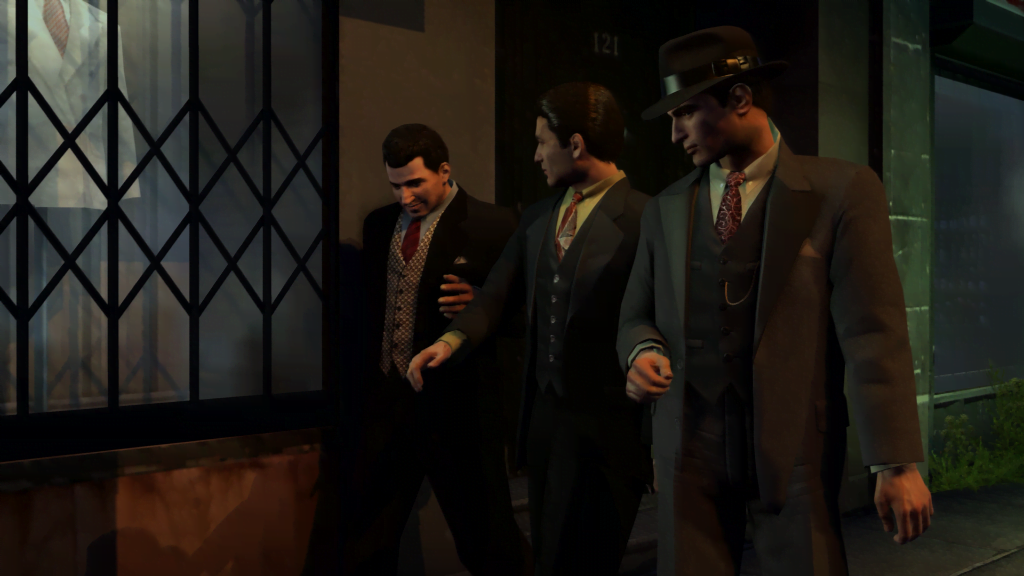 Another police aversion and customisation tactic is the changing of Vito’s clothes. Some outfits are unlocked via story progression but several can be purchased from clothing stores. These include leather jackets and jeans with different coloured shirts, suits with coats and even casual attires. Just like the car will attract police attention if it is wanted, so too will Vito if he is in the same outfit he was last seen causing mischief in. Switching up the wardrobe either at Vito’s home or a store is constantly required if the player enjoys running amok in Empire Bay.

Cars can be stolen either by picking the lock or smashing the window and taking by force if parked or by ripping the driver from their seat if on the road. These cars can be taken to a particular character indicated on the map and sold or taken elsewhere and crushed, each activity will pay Vito for his troubles. This cashflow can then be used to spend on new outfits or car customisation as mentioned above. There is nothing else to spend money on or even anything else to do as far as optional sub-missions which keeps the life of crime rather tame outside of the story.

All three of the original DLC expansions for Mafia II have been included, selectable separately from the story in the main menu. These add several hours to the overall experience and even more for the completionists out there.

The Betrayal of Jimmy focuses on a hitman named Jimmy, a gun for hire working for both the Gravina crime family and the Irish mob. The missions available are less linear and can be tackled without a particular order. These include a score based feature which awards points for completing certain actions. It plays the same and offers little more than a story that exists alongside the Mafia II story without crossing over.

Jimmy’s Vendetta continues the events from The Betrayal of Jimmy with a similar focus on the scoring system.

Joe’s Adventures fills in the gaps between Vito’s prison sentence from the late 40’s to early 50’s. Emphasis on Joe is clever as it allows the player to experience his rise through the ranks of the Falcons family before Vito joins him upon leaving prison. This contains standard missions and the score based style missions from the pair of Jimmy-centric DLC expansions.

Putting the “Definitive” in Definitive Edition

Technical improvements of the 2010 title aside, it’s the visuals that stand out most as far as extra attention goes. While it lacks the polish of a next gen title in 2020 the improvements are significantly noticeable over its original release. It doesn’t look like an older title as much as it feels like one but at the same time it remains engaging enough on a presentation and gameplay level to feel worthwhile a decade later. 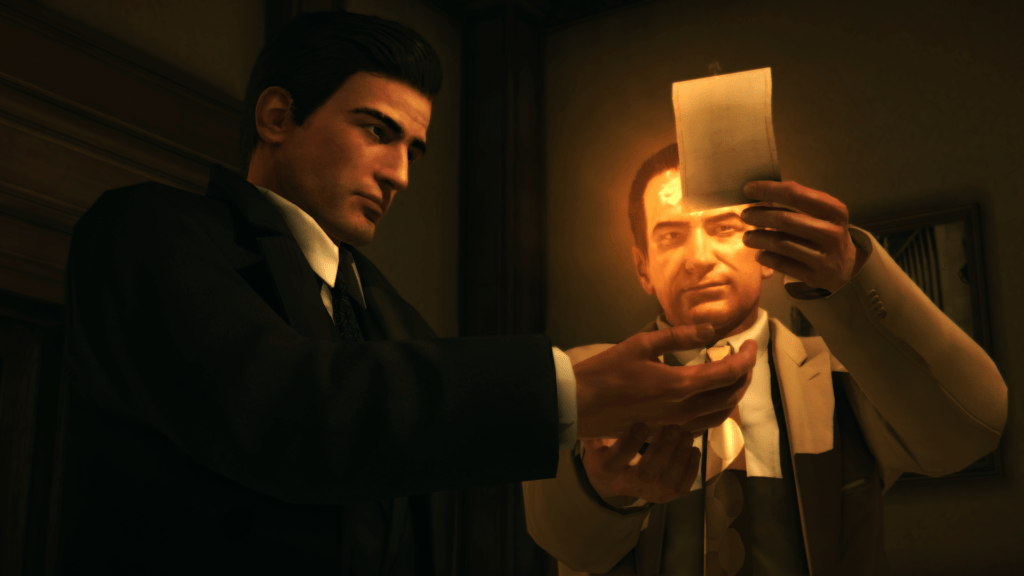 The score is perfectly curated with tunes that feel authentic to the 40’s and 50’s time period they occupy. The voice acting is well done and consistent and adds more personality to some of the cast than their actual characters achieve through their actions and motivations.

A decade has passed since Mafia II first released. It’s gameplay and presentation would have succeeded more in its time than now, even with its Definitive Edition upgrade. With that being said, as someone who had never played Mafia II, I was pleasantly surprised but how it didn’t look and feel as last gen as I originally expected. The visual and technical upgrades have gone a long way to inject new life into a 10 year old game and for the most part it succeeds. 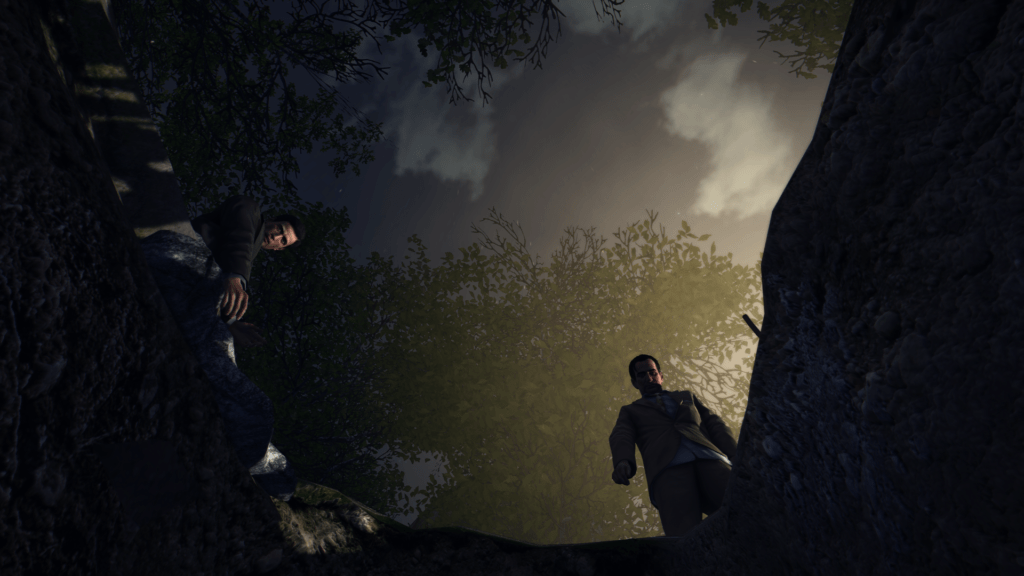 Another outing in another time period to experience the inner workings of life in the mob paves the way for an interesting story with enjoyable gameplay. Mafia II: Definitive Edition is worth the effort in 2020 and by adding in all of the original DLC, there is plenty to keep a player busy long after the credits have rolled.