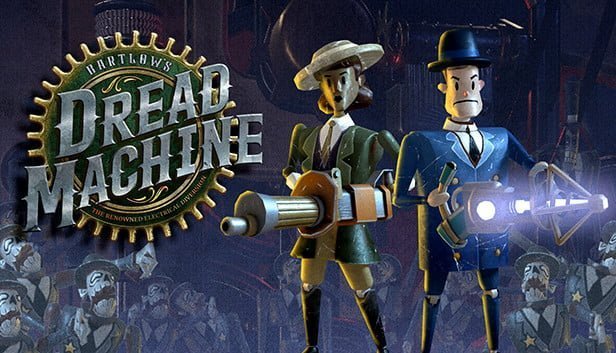 If a silent movie and a complex mechanical tabletop arcade game loved each other very much, the result would be the unique blend of the weirdly enjoyable oddity that is Bartlow’s Dread Machine.

The concept of Bartlow’s Dread Machine is intriguing, a twin stick shooter played on rails with a very retro, mechanical model aesthetic. The player controls their tin secret service agent by moving them along rails and clearing enemies before progressing. Coupled with customisation options and the ability to play co-operatively, there’s enough here to keep the player around through its singular story mode to rescue the kidnapped President Theodore Roosevelt.

Text based dialogue and theatrical flailing of the player characters arms, usually while facing the screen, drive the narrative in Bartlow’s Dread Machine. President Roosevelt has been kidnapped and it’s seemingly up to only one man, one tin man that happens to be a secret service agent to be specific, to save the day. With a story that’s sprawls across the United States, the protagonist shoots their way through and interesting assortment of enemies, picking up the money bags they drop to buy new weapons and cosmetic items such as hats and coats. The enemies encountered on this rescue mission ever into the supernatural and undead, as unpredictable as the unusual narrative they occupy.

The story is weird, the dialogue is very blunt and full of what seems like dad jokes. Supporting the oddity of the overall experience, this isn’t necessarily a negative. It lends to the unique charm of Bartlow’s Dread Machine as an overall package. It’s quirky cast of characters keep it interesting and unpredictable. Shooting your way through a train station very early in the game to find a Station Master seems like a fairly standard objective. When the Station Master spontaneously transforms into some sort of Kraken monster because… well, because he can, the unusual nature of the story and the directions it will take become apparent and the uncertainty of what will happen next keep it exciting though it’s 4-5 hour runtime.

The gameplay is unique with all characters sliding along rails to move around in straight lines on grid like terrain. Ammo boxes, health stations and checkpoints can be interacted with by docking at their icons on the grid. 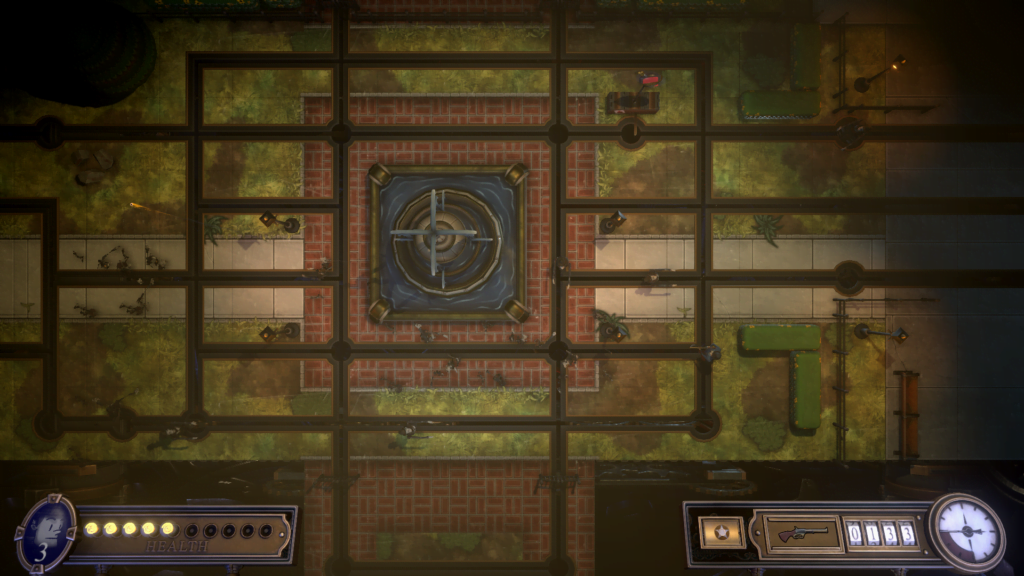 Enemies vary from soldiers, wild animals and mobile turrets to undead horsemen and other supernatural threats. These can be slain by using an arsenal of weapons that can be bought before a Chapter using the money earned by defeating enemies and performance during each chapter. The player is paid in cents and the weapons initially seem very expensive but by progressing the story and performing competently, money comes rather easy.

Acquired weapons can be switched on the fly and have their own ammo supplies. Holding on to higher powered weapons is recommended, reserving them for when the waves of enemies become unrelenting. Most enemy encounters are wave based, typically starting with a slow and steady flow from one or two directions before they swarm from all angles. 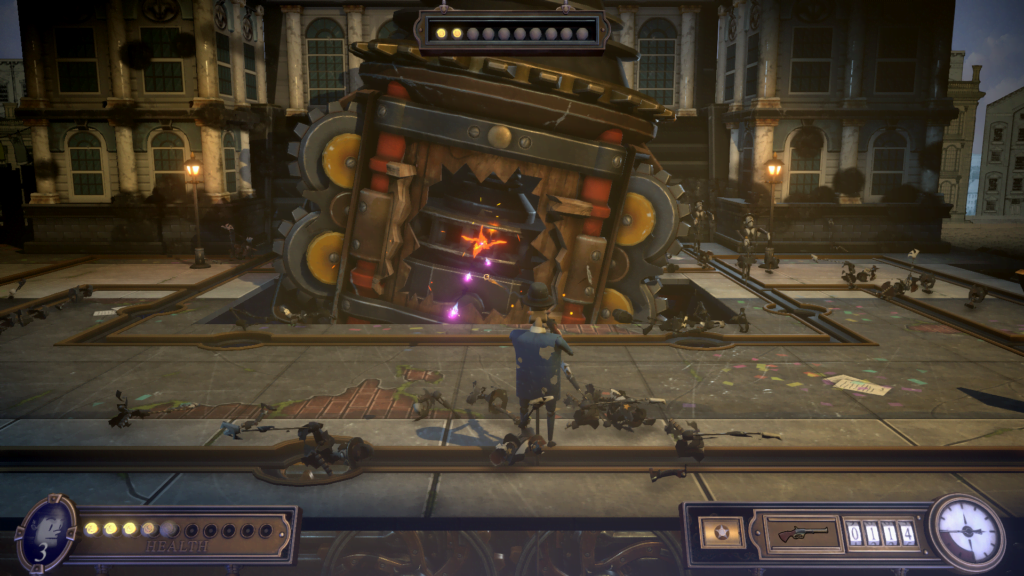 The mission variety is very limited, almost exclusively reserved to defeating waves. Occasionally, light puzzle solving involving shooting switches or rebounding bullets off deflectable surfaces mix it up a little but not enough to prevent Bartlow’s Dread Machine from feeling like little more than a side scrolling wave based twin stick shooter. Despite the limited variety in objectives it remains oddly satisfying to play. The accessibility keeps it simple enough to actually play while selecting a higher difficulty keeps it legitimately challenging. The higher difficulties have enemies inflicting more damage which can truly test the players skill to avoid damage by being quick on the stick or spinning the moment before a bullet hits to deflect it back.

The customisation extends to hats, coats, and pants across a myriad of styles, increasing in price with every one. The secret service agent protagonist can look like a cowboy if the player chooses with the cosmetic variety doing nothing more than altering their appearance. Cosmetics aside, there is an additional category containing the likes of health and ammo bonuses or extra lives which aren’t necessary to complete the game comfortably on the lower 3 difficulties of the 5 available. It’s nice to have these little buffs available if the player finds themselves struggling with certain chapters. Missions can be replayed to earn money if required to stock up on these bonuses.

The visuals are oddly enjoyable, like every other aspect of Bartlow’s Dread Machine there’s a quirky charm to them. A mix between mechanical environmental and character models with an industrial revolution-like dull colour pallet that works, the visual aesthetic comes across as very playful and charming. The sound design and score are no different, unusual and inspired by a combination of older styles. The overall presentation is unique and enchanting in its own quirky mechanical way.

Should you switch tracks?

Bartlow’s Dread Machine is a unique and unusual twin stick shooter on rails that is more enjoyable than it has any right to be. The very self aware nature co-developers Beep Games and Tribetoy have injected into this title is fun and amusing. Their decisions from a design standpoint to the stiff dialogue and dad joke level gags are intentionally cringey at times but it all lends to the charm of this unusual tale. Players looking for a casual co-op experience in a unique world will enjoy their time with this.

+ Gameplay is unique and oddly satisfying

+ Playful injection of weird from developers

Developed by: Beep Games and Tribetoy