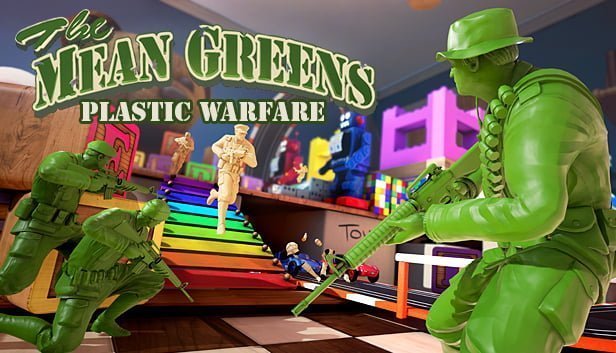 Like a lot of people, I too grew up with the little green plastic soldiers and would wage war with their tan variations. Though the combat itself was undoubtedly limited to silly mouth noises and toys dramatically being tossed around the warzone, aka my bedroom floor. The Mean Greens: Plastic Warfare playfully recreates this typical childhood hobby in the same settings a child would have played with them. A vegetable garden full of cauliflower and beetroot is decorated with toy trucks, ramps and helipads to become a Jurassic battleground, an art play area has ramps made of crayons, coloured markers and paint trays and the battle even takes place inside a fish tank populated with fish and ornaments. With 10 maps to play across in 10 different modes, The Mean Greens: Plastic Warfare breathes life into these miniatures in a silly and joyful manner in this Multiplayer only third person shooter.

Visually interesting scenarios materialise while playing as a toy in playful, innocent battlegrounds that are set in real world children’s backdrops. Bedrooms, gardens, cemeteries and fish tanks are just a few examples of simple and peaceful settings that become disrupted by toy soldier battles. The use of actual toys and real world objects as platforms, makeshift buildings and fortresses is a fun alternative to the gritty, war torn backdrops countless titles tap into. While the complexity, depth and skill required in other titles certainly raise the bar in the shooter genre, The Mean Greens unashamedly offers a simplistic experience that plays well with simple mechanics and accessibility in mind. This levity makes for a more casual experience, eliminating the hardcore mindset that dominates the mainstream. 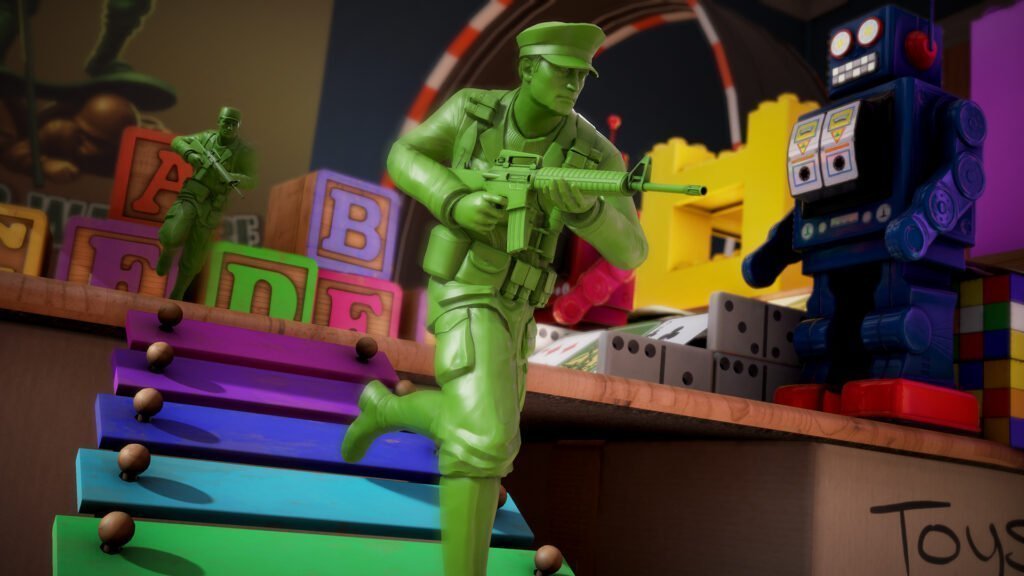 Most modes prioritise objectives over elimination of enemies. Capture the Flag is tried and true game mode that has become a classic and a favourite of players for generations, where the elimination of enemy players serves only to prevent their escape with your flag or to protect your own flag bearer. While Team Death Match (TDM) and Free For All (FFA) modes are naturally present too, some of the alternative modes have some fun spins on typical offerings. One that comes to mind sees one team of players as soldiers while the others takes on the role of raptors in a Team Death Match setting. The team with the highest score wins the round before the teams switch for the next, offering each side the opportunity to jump crazy high and zip around chomping soldiers. It’s silly but different. 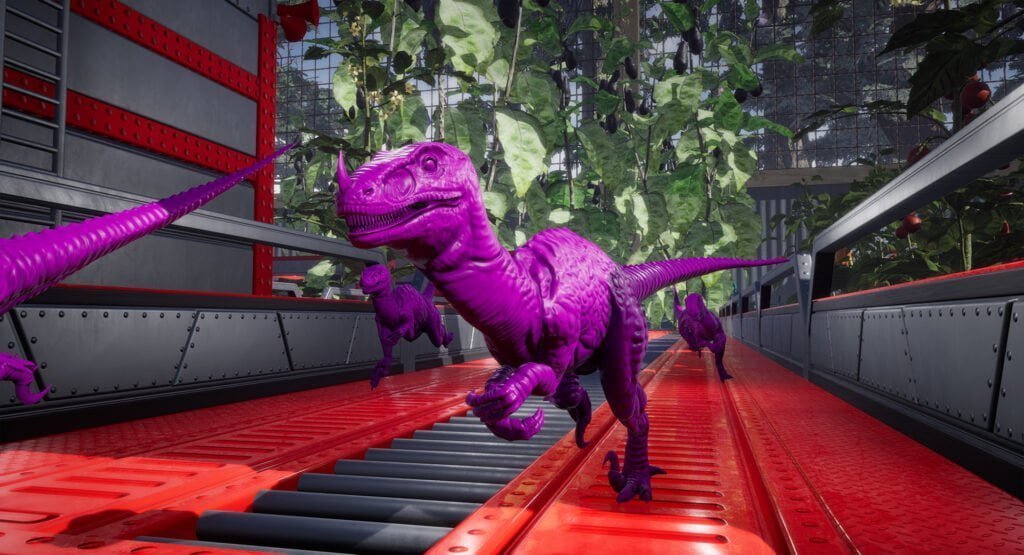 For the TDM and FFA modes Bots fills the lobbies until more players join. The AI in The Mean Greens is hilariously stupid. They will run across the screen or even right towards the gunfire without firing a single shot. Until they do. When they put their game face on and start emptying clips, they can get the work done. At times they will spray carelessly while at other times they will have pinpoint accuracy. It’s unbalanced to say the least but any title that includes Bots to fill games to prevent endless matchmaking is a feature that should be welcome and encouraged. 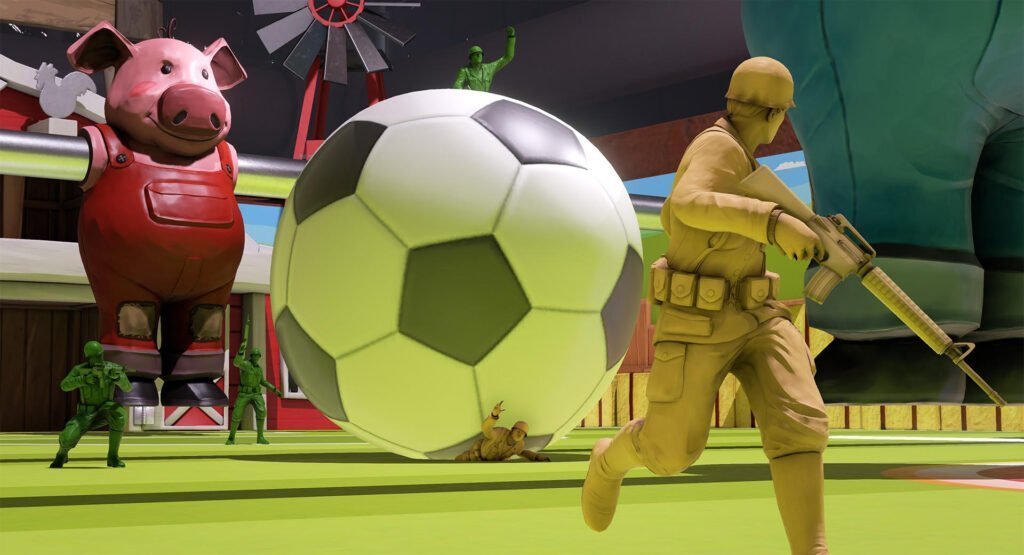 Each player has 6 weapons to cycle through with the press of a button. An assault rifle, sniper rifle, shotgun, rocket launcher, grenade launcher and a flamethrower are at the toy soldiers’ disposal. To aid with accessibility and the casual nature of The Mean Greens, there is no recoil or bullet drop. Where you aim is where you hit. While this is likely to upset those who prefer a more realistic take on the gunplay, these choices make this as user friendly as possible for the most novice and younger players. 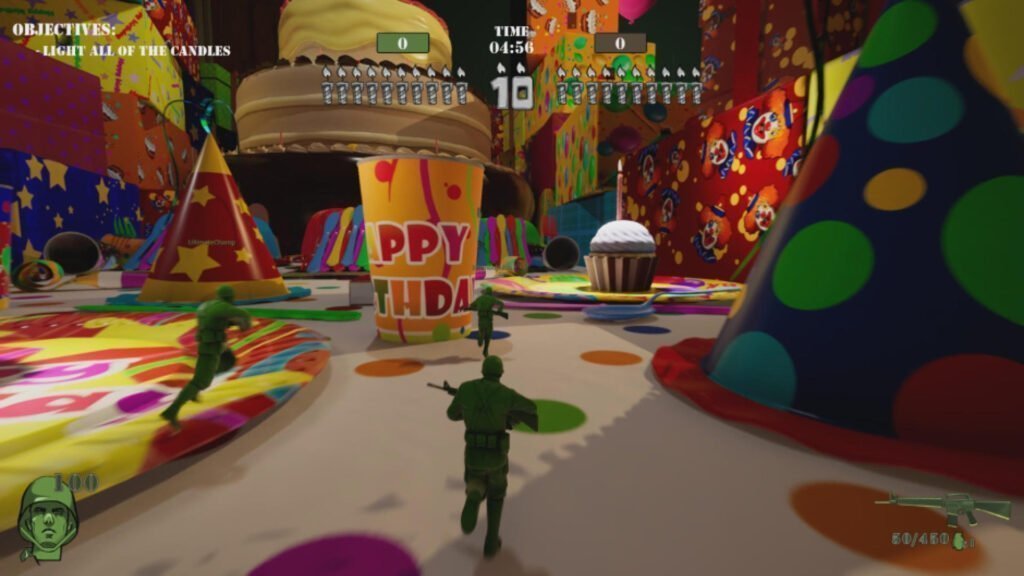 One area that lacks in the creativity department is sound design. With the exception of running up a xylophone where each key satisfyingly rings accordingly, the potential for a more unique array of sounds from the toys that populate the maps is not capitalised on. The soundtrack offers a tone of playfulness that kind of just exists. It’s background noise that doesn’t feel dramatic or weighted in tension but fails to also feel particularly fun either. 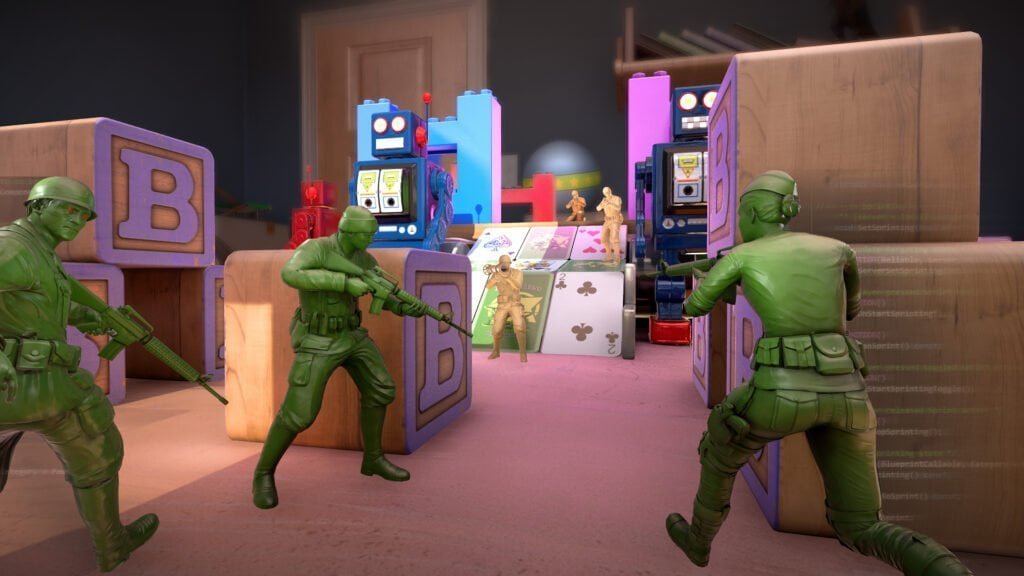 Matchmaking with actual players can take some time and more often that not the game will just be full of Bots, at least for a start. Whether this is a case of the title not yet finding its feet on Xbox or low interest remains to be seen. Regardless, the inclusion of Bots keeps the game playable at least.

From the imaginative map design, games modes and 15 selectable skins for the soldiers, this is about as far as player choice is concerned. There is no progression system, customisation or upgrading of weapons. What you see is what you get, for better or worse. Again, with The Mean Greens leaning on accessibility and a more casual and relaxing approach to the gameplay, the G-rated shooter is likely to alienate those looking for a more mature experience. 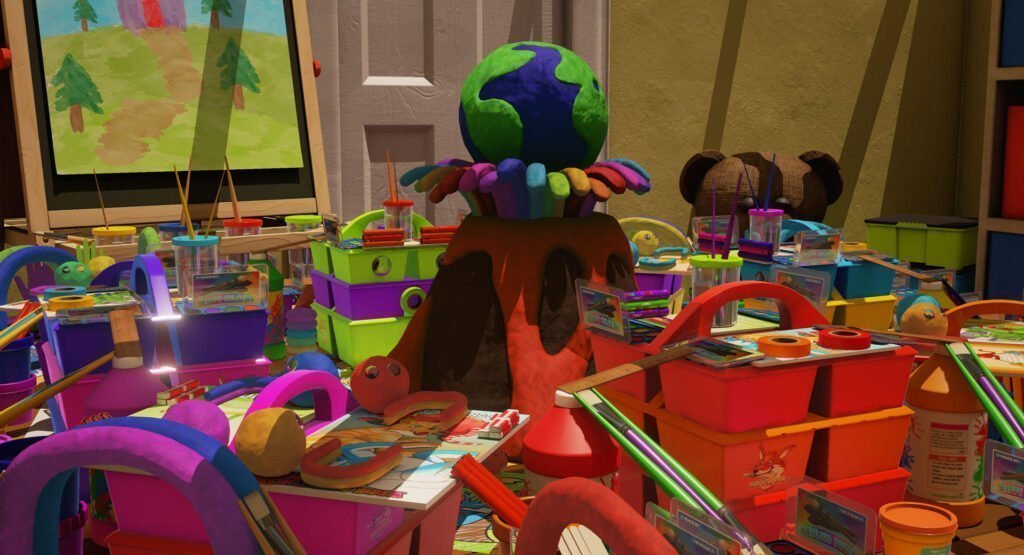 The Mean Greens: Plastic Warfare is a very safe and accessible venture into the third person shooter genre. Where it lacks in imaginative gameplay mechanics or common systems such as progression and customisation, it is more than competent with its visual charm. The decision to play things so safe is likely to prevent this from joining the collection of most fans of the genre but for younger players in particular, this ultra accessible experience is more than capable of providing a satisfying experience.

+ Accessible and fun gameplay designed for younger or casual players

– Lack of progression or customisation may alienate

– Matchmaking due to low player count

A free 30 minute Trial for The Mean Greens: Plastic Warfare is available on Xbox One.