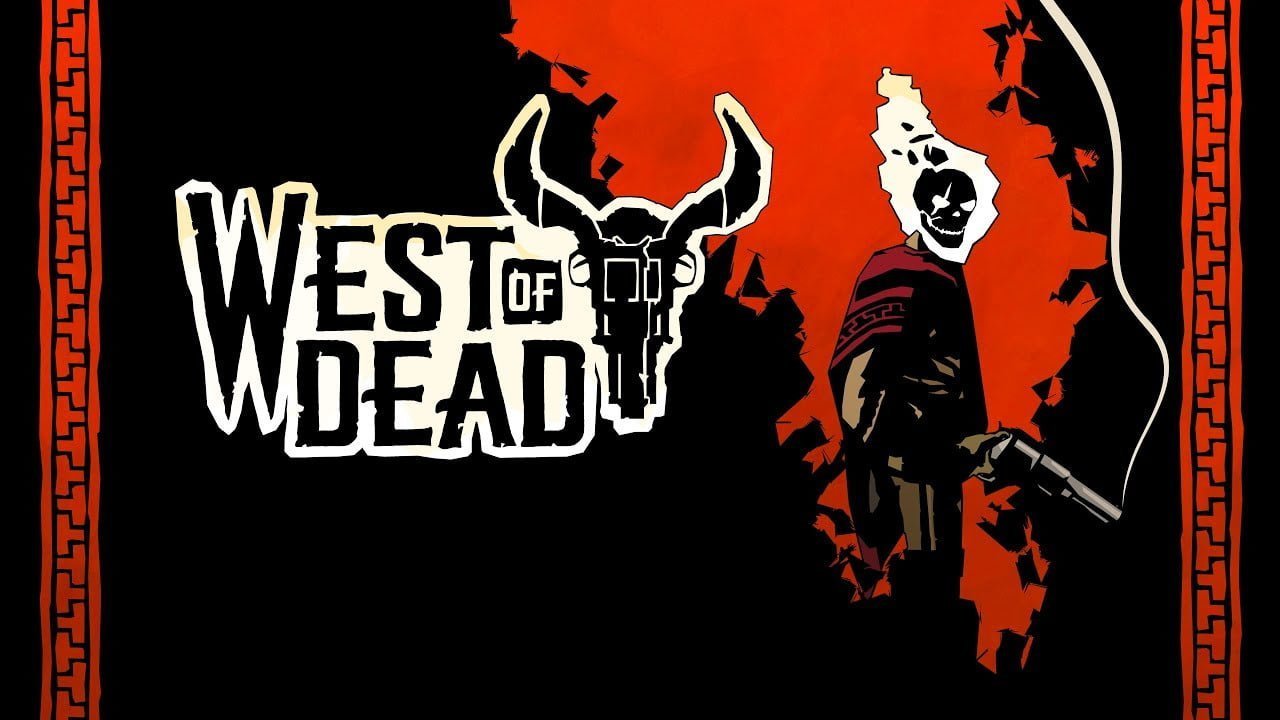 A striking cel-shaded inspired art style sets the tone for this western twin stick shooter which features a poncho toting, flaming skulled undead bandit powerfully voiced by Ron Perlman, perhaps most known for his role as Hellboy or Clay from Sons of Anarchy. Perlman narrates as the opening cinematic establishes his characters experience with death and beyond in the grim and gritty Purgatory, Wyoming. Stuck in a loop of returning to this moment of his (after)life with every death, West of Dead sees the player attempt to complete 9 missions in a single deathless run in a procedurally generated world.

A simple tutorial walks the player through the basics of gameplay and cleverly introduces all mechanics in short bursts so it does not overwhelm the player. The accessibility of the gameplay is one of West of Dead’s strongest assets, as it’s simple, fun and dynamic enough to add variety to most enemy encounters. Allocating a gun to each trigger, melee weapons including axes and a throwable item such as dynamite to the bumpers allows for simple combinations of assaults to be unleashed on the undead enemies that lurk in the shadows. Enemies hidden in the dark can not be targeted unless a lantern is activated and any enemy within a small radius will be stunned upon illumination, leaving them susceptible to taking greater damage.

Evading enemy attacks is simple by using a dive roll to move between cover, which is destructible. Crouching occurs automatically when next to any form of cover and moving between it is as simple as vaulting over and sliding to the next. It feels fluent and seamless, making combat fun and less dangerous by allowing for such control of the battlefield. Reloading of weapons occurs automatically, as does the recharge of any throwables, all ammo is infinite and relies only on a cool down, eliminating the need to dash frantically across the combat zone to refill.

Different weapons such as revolvers, flintlock, rifles and shotguns can be found and are levelled, meaning the higher the level, the higher the damage output. Some weapons also have effects like bleed that causes damage over time even after the initial blow. With progression comes more difficult enemies, including mini-bosses with large health bars making them very bullet spongey. The standard enemy variety ranges from melee only, armed and supernatural beasts with combinations of health and stun meters. When enough damage is received the enemy will be stunned and as with their exposure to a lantern being ignited, they will take more damage than usual.

Their designs are fun and unique enough to prevent feeling too familiar and their attack patterns are varied to keep the player aware of their surroundings at all times. Careful observance of the battlefield must be given when facing Outlaws, powerful enemies that can very quickly dispose of the player if going in without a strategy.

Each level is broken into multiple parts and each of them are labrynthian and dungeon like in design. Unlit areas are dark, illuminated by a small radius that surrounds the player and only by igniting lanterns do they fully reveal themselves. Exploring every possible route will reward the player with new weapons, chests containing loot or shrines where the player can upgrade their personal attributes such as health and melee damage.

Occasional loot drops, such as a charm remnant that recovers small portion of recent health-loss when striking with a melee weapon add depth to the genius but simplistic gameplay. Remnants are lost memories and ideas, and when taken to “The Witch”, an antler-wearing woman at the end of missions, they can be further upgraded at the cost of Sin, one of two in-game currencies dropped by enemies along with Iron. Iron can be spent at Traders to purchase weapons, items and abilities.

A touch of supernatural elements help West of Dead stand apart from a typical western inspired affair from the design of the player character through to enemy design, shrines and portals that populate the dark halls of this action packed afterlife experience. Teleportation was not a feature one would expect to see here but in the world that has been established, it works.

The looming threat of permadeath is daunting and can be frustrating. Upon defeat the player loses all progress and possessions, having to start all over again. Coupled with the procedural level generation, no two runs will be the same. Some areas can be breezed through and fully explored in as little as five minutes while others can take more than ten for example.

The randomness and lack of familiarity puts an interesting spin on the challenge and the further the player progresses, the harder it gets and the more the fear of dying settles in. With health pick ups very few and far between, the player must be consistently aware of their enemies positions and make excellent use of cover and timing of their dive roll.

Tonally, West of Dead is cleverly uses a dull colour palette that is accentuated by reds and excellent use of lighting. Accompanied by an appropriately western themed soundtrack, the entire experiences feels legitimately like a gun slinging twin stick shooter should.

This title is recommended for mature audiences and can be paused at any time which is especially useful for studying the uncovered parts of the map to see which unexplored path should be ventured to next.

Upstream Arcade have developed a fun, unique and visually striking twin stick shooter set amidst a supernatural western backdrop that is a joy to experience. The challenge and frustration will test some players patience but the satisfaction that comes with getting at least one step further than last time can be addictive and rewarding. Being returned to the main menu after death to see “New Run” instead of a more appealing option such as “Continue” is not as bothersome as may be expected.

+ Striking art style, use of lighting and colour

– Permadeath can be frustrating

* West of Dead is available on Xbox Game Pass *