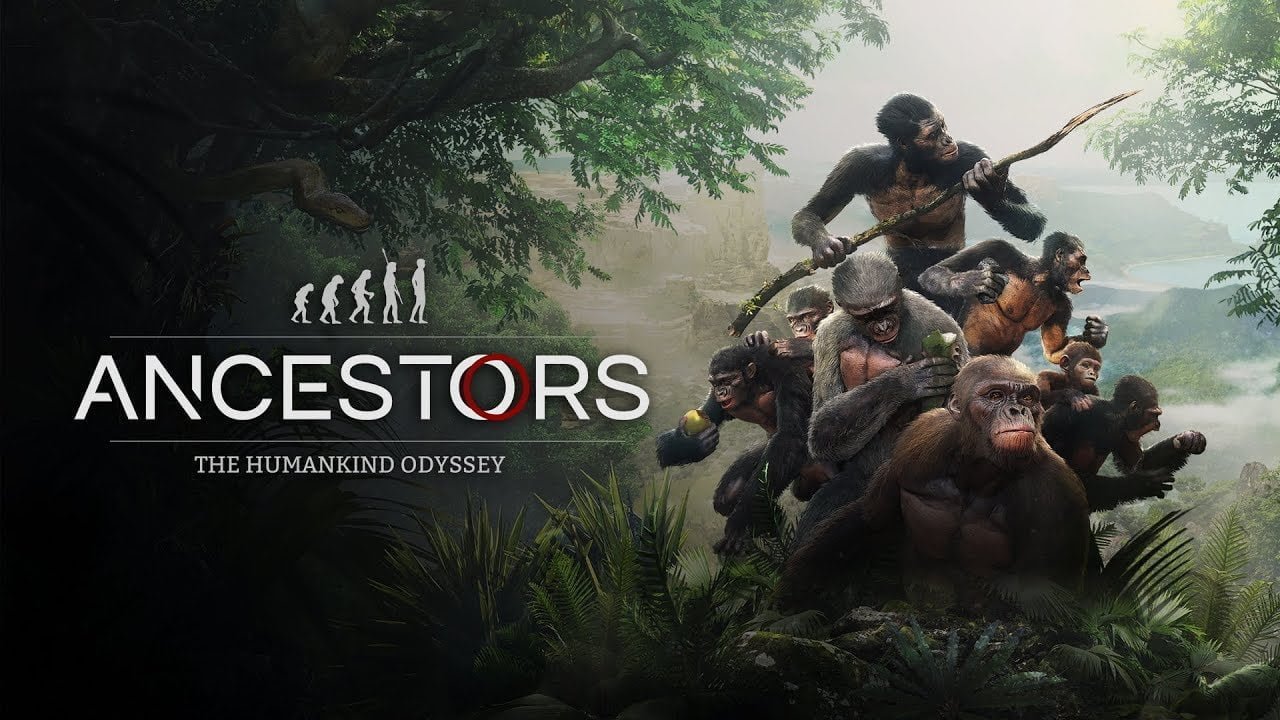 Evolution is a fascinating subject. The concept of something evolving over millions of years as a result of its experiences, survival instincts and trial and error to perfect its genetic structure is mind blowing. Welcome to Ancestors: The Humankind Odyssey. “Your” experiences, “your” survival instincts and “your” trial and error is exactly what is required to progress through this open world RPG odyssey. Starting as a baby ape ten million years ago, your goal is to successfully evolve through generation after generation into a more sentient species that will eventually become human.

Before the game even begins you are given the opportunity to name your lineage, select whether your starting ape character is male or female and what kind of experience you want to have which is determined by how much of a tutorial and HUD you want to have ranging from full to absolutely nothing. Now while choosing to have none of the above sounds fascinating and challenging, I can not stress enough how much I recommend you choose to have as much help as possible. Unlike any other game I have ever played, Ancestors does very little to hold your hand. I can appreciate that this lack of direction provides a more immersive and certainly realistic experience that these apes would have actually lived through but for a video game the unknown can lead to frustration. That is until you learn to conquer it. Once you figure out how the mechanics of the game actually work, the game becomes far more accessible and the world easier to navigate. 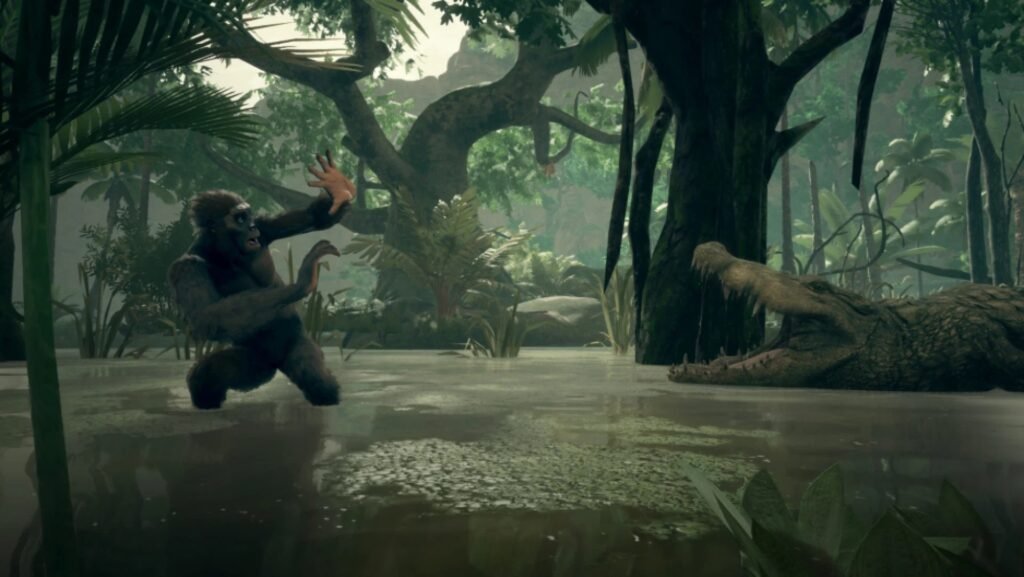 Survival is central to Ancestors and in order to do so you must eat, drink and sleep to stay fit. Failing to maintain these life essentials results in your ape gradually becoming weaker, reducing their stamina and life expectancy in the process. These can be replenished at first but if their levels drop too low, the damage becomes permanent. Sustaining damage from the predators in the wild or falling from great heights can result in bleeding, broken bones or even death. Bleeding and broken bones can be mended by eating certain vegetation, while broken bones can heal over time. While under these effects your ape will move slower and their health and life expectancy gradually drain. Sleeping somewhere safe is a great way to speed up time for healing broken bones.

A dopamine meter must also be maintained via eating and identification of surroundings using your senses or fear and ultimately hysteria will kick in. Wandering the vast environments will often lead to your ape succumbing to fear. This is a play on the fear of the unknown and the screen will turn dark, predatory growls will echo all around and piercing red eyes will appear and disappear. There are three options when this occurs. Turn around and return the way you came, run towards a glowing light that acts as a safe zone or use your intelligence sense to locate and identify everything in the area, spawning a white light at the end of a wind stream that must be followed, resulting the option to conquer your fear and make the area safe to travel without fear kicking in. If you are unable to do any of these things, your dopamine meter will deplete, your ape will run on its own and hysteria will spawn you back in your settlement.

Mating occurs by grooming an ape of the opposite gender that is not family related. The female must be fertile in order to fall pregnant. Once a pregnancy occurs, you can fast forward to birth by using the Give Birth prompt at the sleep spot. A maximum of 2 babies per couple is the limit and from my experience no more than 6 babies can be in the clan. 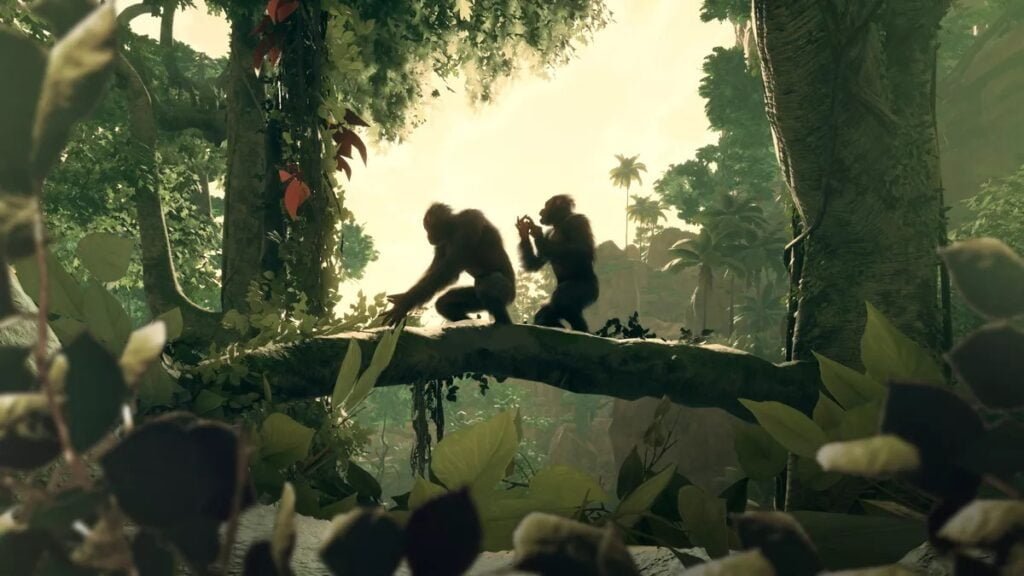 While out roaming the wild you will encounter other apes referred to as outsiders. These apes are in various forms of distress, ranging from hunger and bleeding to simply scared. Their body language is the indicator as to what their issue is and like almost everything else in this game, you must figure out what that is and relieve their distress accordingly. Upon doing so, they will join your clan. At any point, you are able to interact with any member of your clan and assume control. Babies, adults and elders can all be controlled and each have various limitations depending on their age. This allows for different experiences and perspectives that add depth to a game that is already riddled with it.

Adult and elder apes are able to backpack up to two babies and doing so is central to the development of your abilities and genetic advancement over generations. Every action, new object or plant discovered, use of skills and enemy encounter while having a baby on board will increase your XP to spend on an incredibly dense and detailed skill tree, present in the form of neutron links within their brains. Upon unlocking a new skill, ability or other enhancement, additional ones will appear for you to unlock by utilising those new skills. It’s an interesting and unique way to progress a skill tree and most importantly, it challenges the player to act a certain way in order to do so. 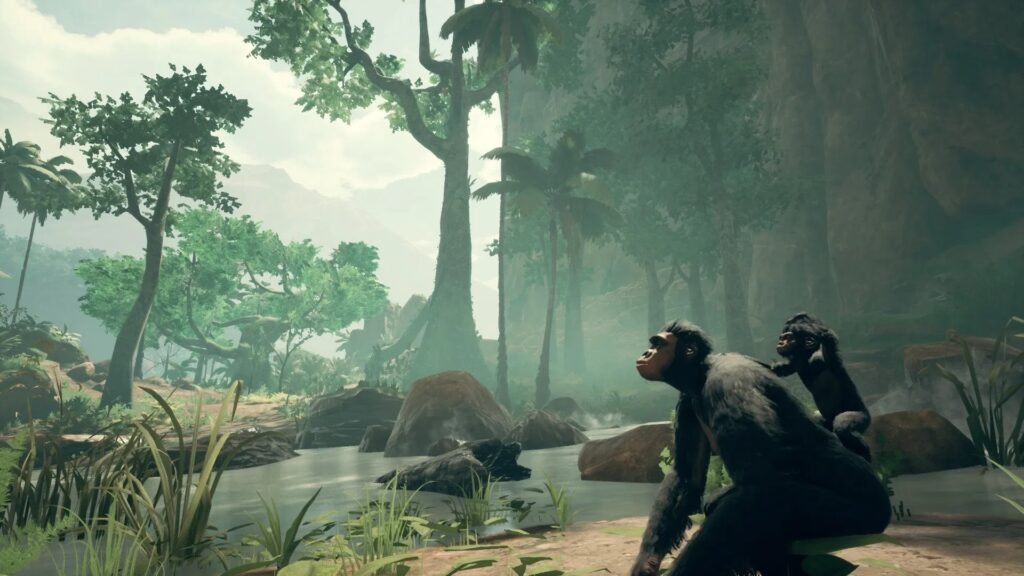 Traveling alone with one or two babies backpacked is recommended for your first ventures into the wild so that you can become familiar with your surroundings and learn the fundamentals of survival. As you become more confident, instructing other apes in your clan to follow you provides strength in numbers and makes it easier to intimidate predators. Initially only able to carry one piece of vegetation or weapon, doing so more frequently will open up the skill tree options for carrying an item in each hand and this can be applied to your clan. Low levels of success intimidating predators can shift dramatically when travelling with a group, each equipped with weapons.

Items and weapons can be altered either by hand or using different combinations of them together, resulting in modified versions. For example, with a stick in hand you can rip the little branches off. Beat this modified stick with a rock and it will become a spear. Each iteration can be used to combat predators and the latter forms do more damage. When it comes to combat, it can’t be actively engaged. Combat in Ancestors is a measure of self-defence only. When attacked, time will slow and you will have a brief window to hold A and a direction. At the sound of an audio cue, releasing the buttons will successfully dodge out of the way. When holding a weapon, aiming towards the predator will result in it being stabbed or clubbed with whatever weapon is equipped. Repeating this multiple times will eventually kill the predator. 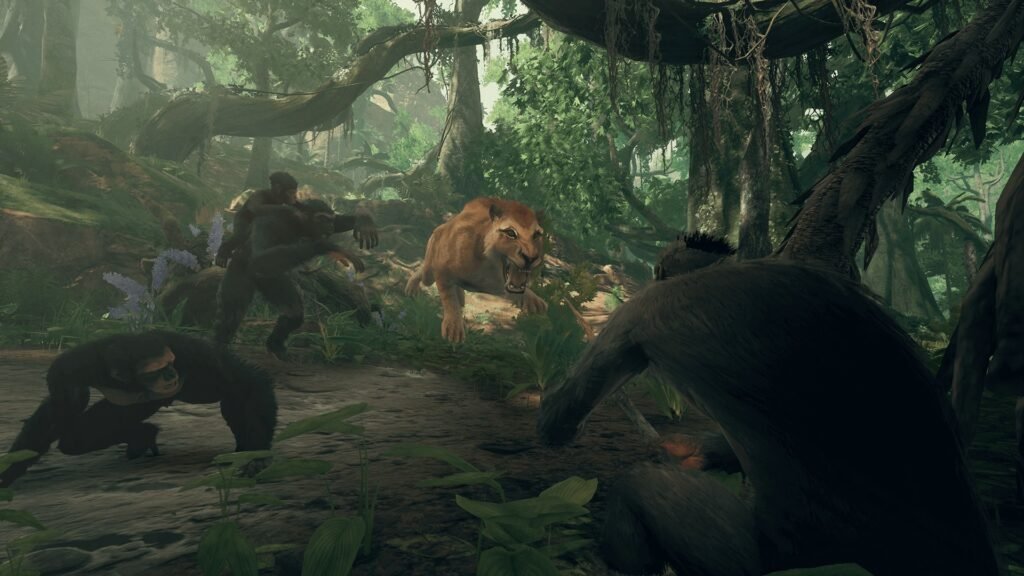 There is no story as such but instead there are objectives. They tell you what you need to do but not how to do it. All of these objectives aim to familiarise the player with the fundamentals of survival from encouraging reproduction, passing a generation or finding a new settlement to set up as your base camp for your clan to live. The frustration kicks in when the game asks of you something you don’t know how to do. Unfortunately, there are no clues at all, instead you must figure it out. The second objective in the game is to build a sleep spot. The only thing obvious about this is that you are being asked to build somewhere to sleep. But how and what with are up to the player to figure out. Like many other things in Ancestors, the knowledge of doing one task can be applied to others with experimentation and before you know it, the mechanics become less of a mystery and instead become satisfaction, providing a sense of accomplishment in the smallest of things. The learning curve is punishing but leads to rewarding payoffs.

When certain criteria is met, it is possible to pass a generation from your sleep spots using the Evolve prompt, launching your clan 15 years into the future. Before doing so, depending on the number of babies in your clan, a minimum of one is required, you will be able to allocate a reinforcement to that number of abilities that won’t be lost in the new generation. For example, if you have two babies in your clan, you would have two reinforcements to spend. The number of reinforcements available also increase as you evolve further. You could choose to reinforce the ability to carry an item in each hand and to be able to construct using one less item. Anything that is not reinforced will be lost, with the exception of previously reinforced abilities if this is not the first generation pass or core abilities from genetic mutations that babies have the chance to be born with which will be detailed in the skill tree. Once reinforcements have been made, it is time to pass the generation. Your babies become adults, adults become elders and elders pass away.

To go even further beyond, evolutionary leaps can be made which based on your exploration and feats accomplished, such as discovering various locations, killing certain predators, tricking them into killing each other or using certain weapons, will launch you further into the future. The more you do before taking this leap, the further you will travel forward in time. Genetic mutations that any babies may have had will develop and be unlocked in the skill tree by default. If certain actions are completed before their scientific origin, for example killing a crocodile with a spear hundreds of thousands of years before science suggests the first occurrence, additional time bonuses are awarded.

Should you be unlucky enough to have your entire clan die, their lineage will die with them, ending the game and requiring a brand new game to be started from the very beginning. This only happened to me once and at first I was devastated after losing 13 hours of progress. When I started a new game though I immediately knew what I needed to do and how to do it quicker. I was able to apply what I had learned previously to evolve my clan significantly faster, having retraced my steps in less than 2 hours. The trial and error, difficulty and frustration aren’t negatives in Ancestors, they are tools to success. 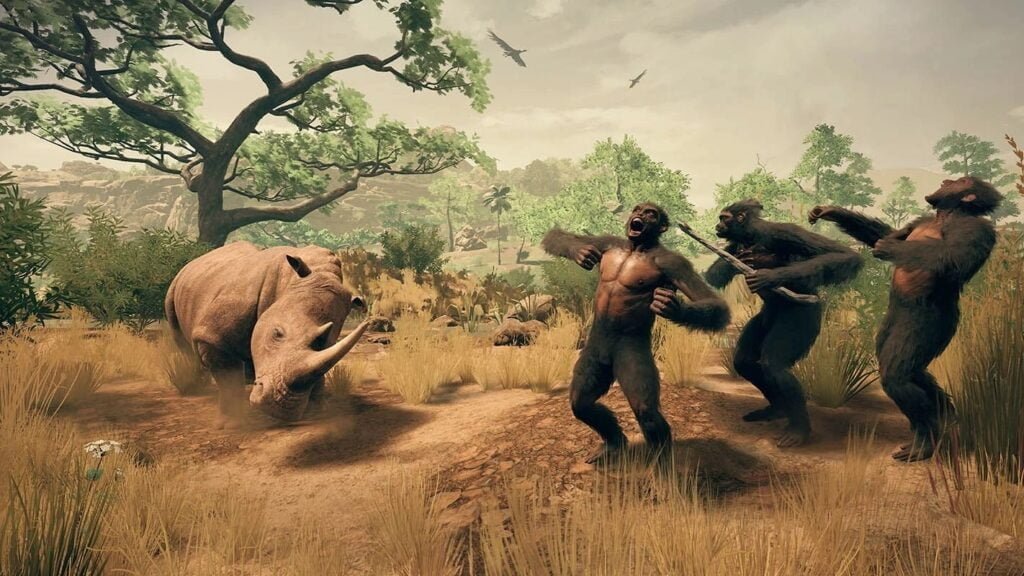 The world is massive, rife with exploration of locations, food sources and predatory wildlife to discover. The environments are amazingly detailed and vary from lush green jungles, cliffs basking in waterfalls to barren, desolate land and underground caves. There are so many unique environments that all feel alive and full of danger. The music is appropriately themed, varying slightly in the different locales that add to the wonder and unknown.

It is not just the violence of seeing an ape eaten by a tiger or suffocated by a gigantic python that make this title not one for the kids, instead it is the difficulty of the learning curve, simply too complicated for younger players, a frustration experienced by us adults initially too. 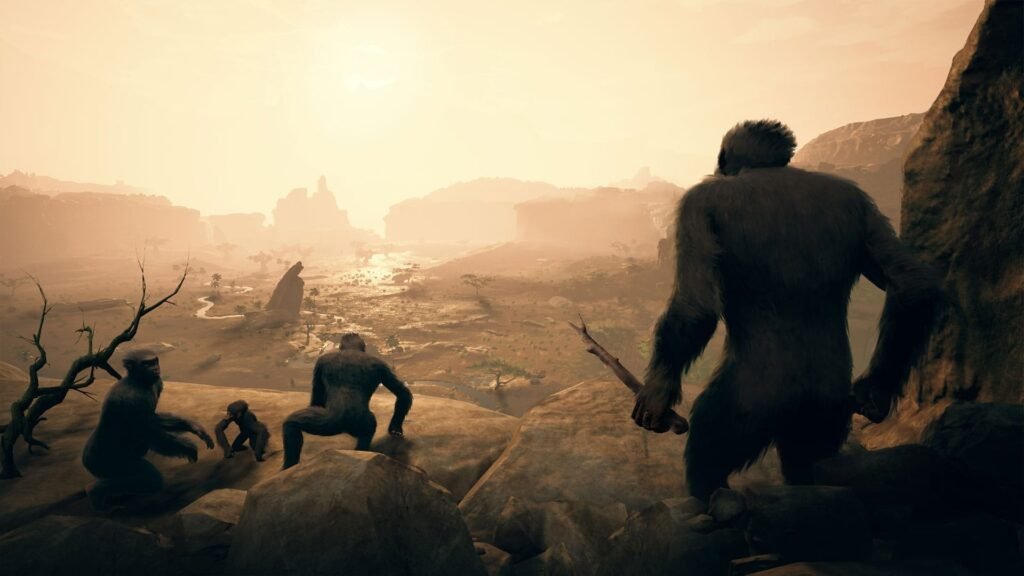 Ancestors: The Humankind Odyssey is a game unlike anything I have ever experienced. The ambiguity to the gameplay, when overcome, shifts from aimless wandering to rewarding accomplishment. Patience is critical with Ancestors and I commend Panache Digital Games for its one of a kind approach to putting our in game survival at the mercy of our real life survival instincts and intuitions. This will not be a game for everyone, particularly those without patience but I could not recommend this experience any more. I have never played anything like it before and I doubt I ever will.

+ Sense of accomplishment with progression

– Combat and enemy encounters can frustrate until understood